Coffee and Cocktails -- and a Storied Speakeasy Debut at Patent Pending 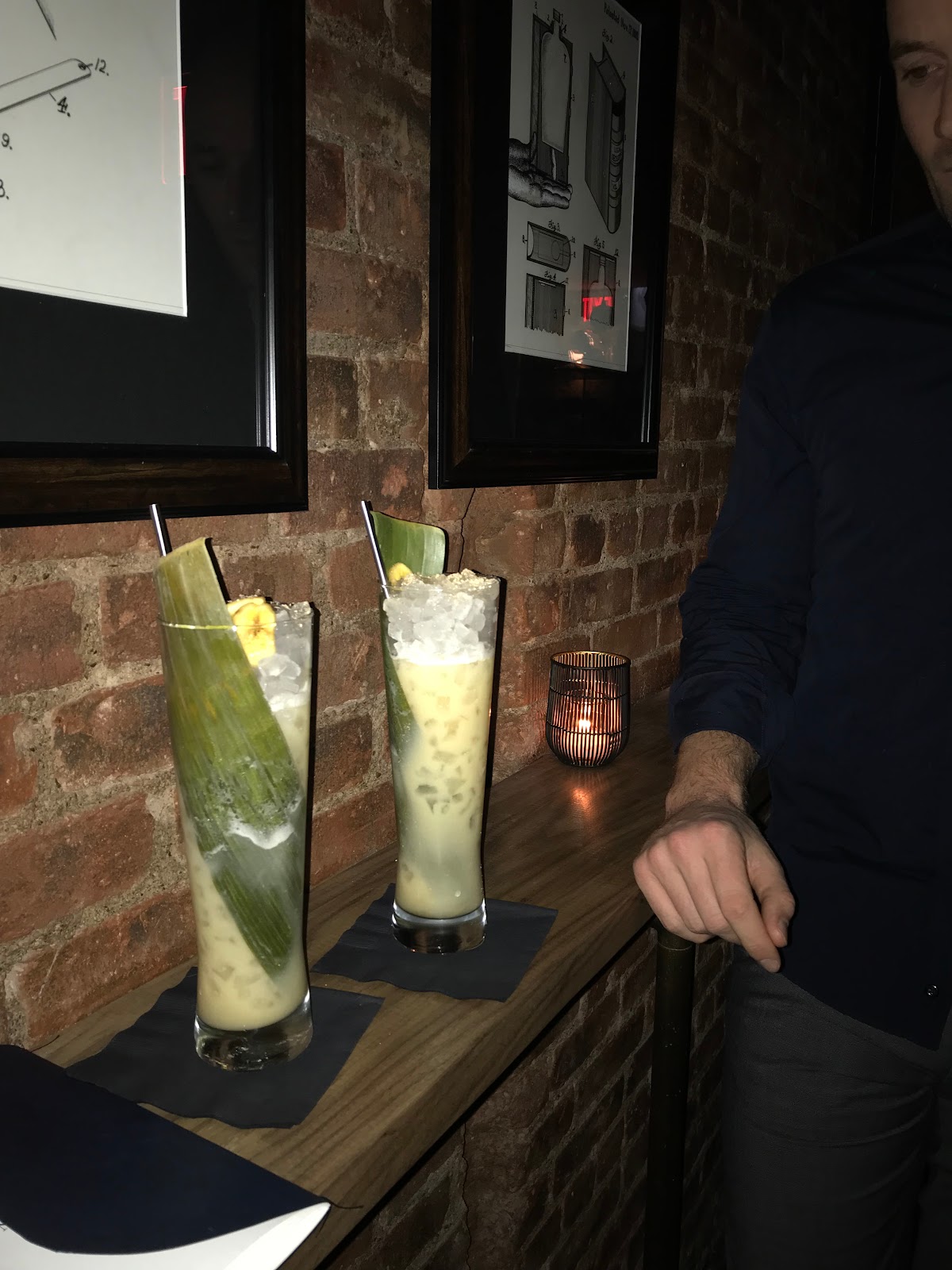 At first, the invitation to the pre-opening debut to a new cocktail club and coffee spot located in what I’d snarkily referred to as “No-Man’s” neighborhood - was a bit confusing.
Granted, I may still have my head in the clouds.  The Cloud Forest, that is.  See, I was getting back to Gotham after my annual, extended working garden design and menu development holiday at Ecuador’s Hacienda Cusin - high in the sierras.
However, the invite came from Rachel - one of my favorite communications professionals -- so I thought - “Sure, I can attend” and sent my RSVP from Ecuador, figuring I’d unpack the concept once I got to the address.

In hindsight - how did I not see it?

This concept couldn’t be more brilliant! It combines two of my most favorite food groups: coffee - and cocktails.

In fact, the new joint is located in the cellar of the historic Radiowave Building in the NoMad neighborhood of Manhattan (I stand corrected - it’s no longer a no-man’s land.) 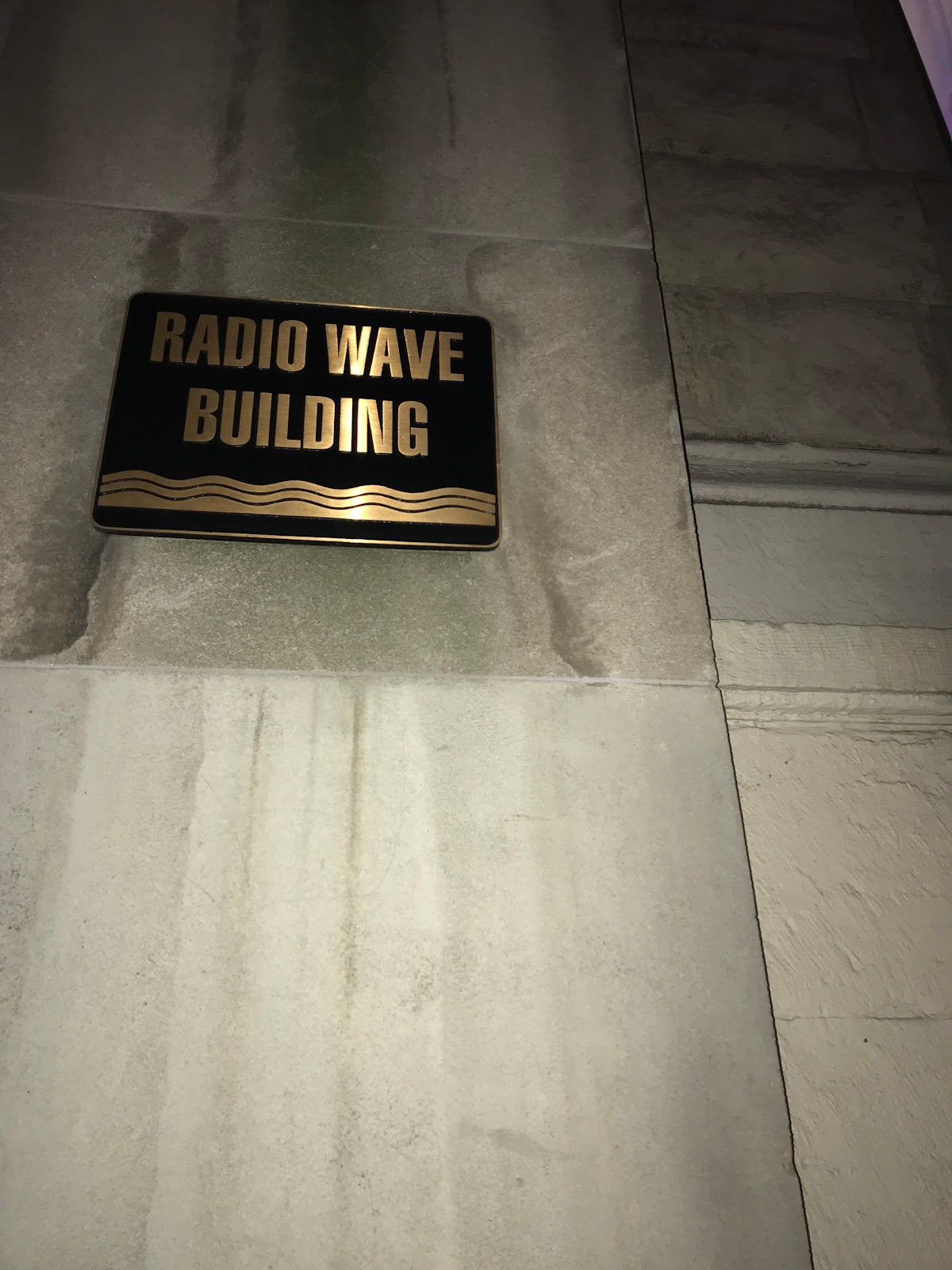 Bordered by Chelsea and the Flat Iron, residentials are increasingly popping up.
Plus, just steps away, I learned is the owners’ other remarkable restaurant, Oscar Wilde).

And the hits just kept coming.

The new location is the very place where the visionary Nikola Tesla once called home and lab.

What karma! I had just completed the first deadline to the 111 Places in Long Island That You Cannot Miss book (publish date ETA is Autumn 2018) and had researched Tesla and his work and labs extensively. I fell in love with this homegrown engineer and his iconoclastic style.

I learned: “The famous ‘Tesla Tower’ and Tesla Laboratory was built by Nikola Tesla from 1901 to 1905, in Shoreham, Long Island. It was intended to become the first broadcasting system in the world. The tower's purpose was also to transmit electrical energy without wires from the huge electricity reserve in Niagara Falls, and transmitted through the ionosphere and the ground to the whole planet.”

Wow indeed. No less gobsmacked, it seems, is the irrepressible co-owner and founder, Ryan McKenzie, a leader in hospitality design, marketing, and advertising and a founding partner of the hospitality-focused creative agency​ S​immer​, who dreamed up the concept.

Ryan is all enthusiasm - and a vibe - or a dare-say “current” that is an electric, pinch-me/isn’t this just the “bees knees” sophisticated joie de vivre spirit that makes you feel like you’ve known him all your life and can’t wait to talk to and catch up.


McKenzie is the epitome of the gracious, fun restaurateur. Move over Danny Meyer -- Gotham has its new hospitality guru.
In addition, the general manager, Khoi Le, is a most gracious host, welcoming you and making you feel comfortable in the cocktail club.

Ryan told me that the clandestine subterranean space practically wrote the restaurant club’s narrative -- and there are too many good chapters that reveal itself here.

“The concept fell in our lap,” Ryan said grinning, with no small amount of tickled disbelief. “I was walking the neighborhood -- my office is nearby,” he explained. It appeared he was still reeling from his good luck at discovering such a locale.

Perhaps the gods of luck shined on Ryan and partners, but - it still took a visionary to make this slice of history spring to life. Especially when I learned the place had hosted garmentos and was filled with wholesaler racks, playing cards, pagers, and other tokens of the garment centers everyday rituals.

“I come from California - and we don’t have such historic speakeasy places as New York,” he added.
Speaking of speakeasies - when I told Ryan that I had designed a secret door in our country house leading to our downstairs speakeasy - he picked up the thread without missing a beat, asking, “When can I see it?!” I love that. He’s so much fun!

He then wasted no time in demonstrating the coffee spot’s secret door back to the cocktail bar.
The mystery of what this dual identity enterprise offered soon became clear.

So - you walk into the restaurant from 27th Street - and during the day - you can get an excellent cup of coffee at Patent Coffee which serves single-origin coffee, pastries and snacks.

By night, cocktail enthusiasts will pass through a hidden door to access Patent Pending, a discreet underground bar and casual restaurant, or what I call, a Speakeasy. 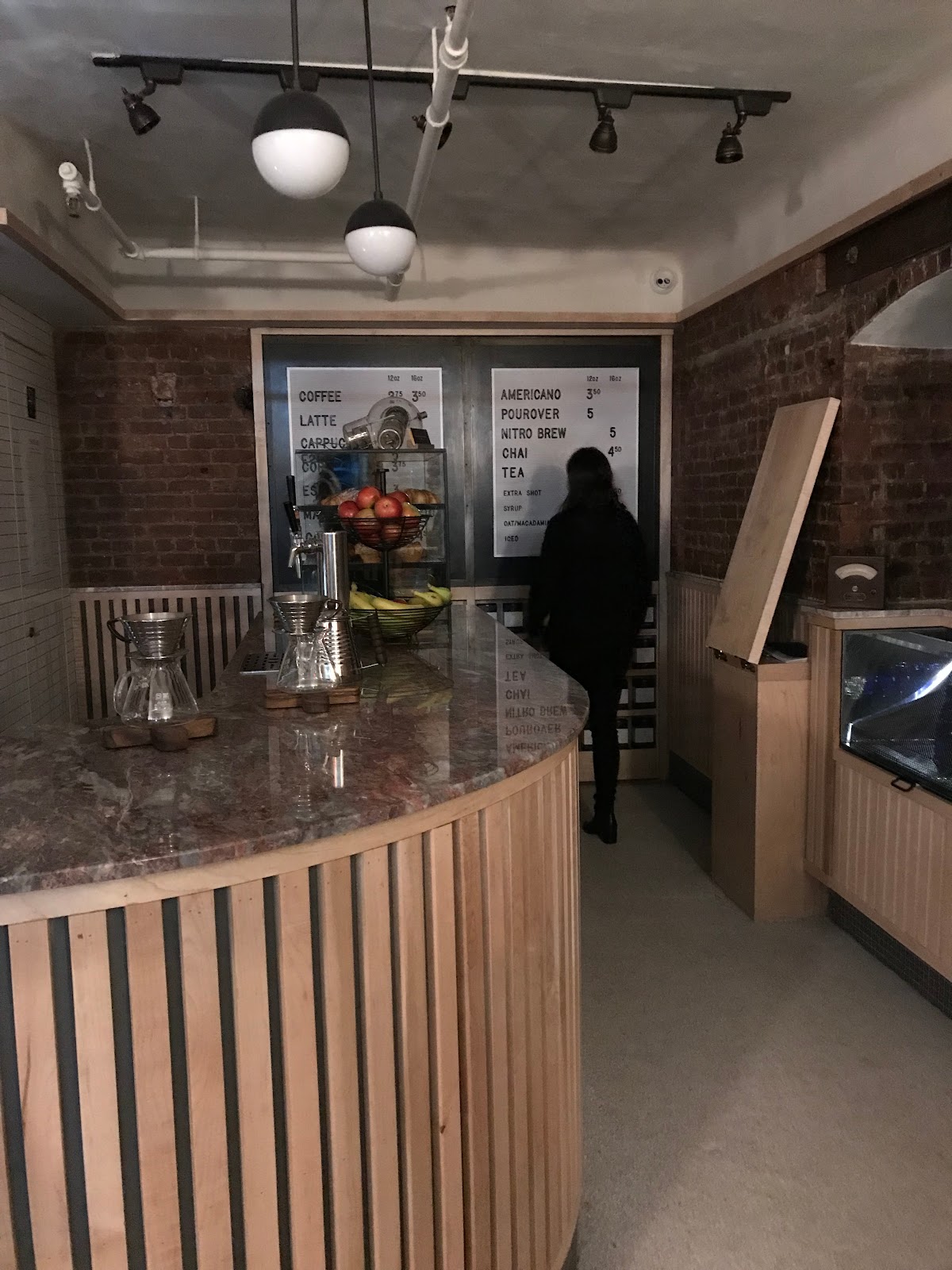 The entire space, designed by C​arpenter + Mason ​ in collaboration with Simmer and built by ​Cocozza Group,​ utilizes original basement arches, along with custom metalwork, dreamy lighting, expansive marble, as well as fresh greenery brought in daily from the nearby flower district. The entryway is also outfitted with a striking custom-made sign made up of channel letters (a nod to Patent’s innovative former resident), the content of which changes from day-to-night. 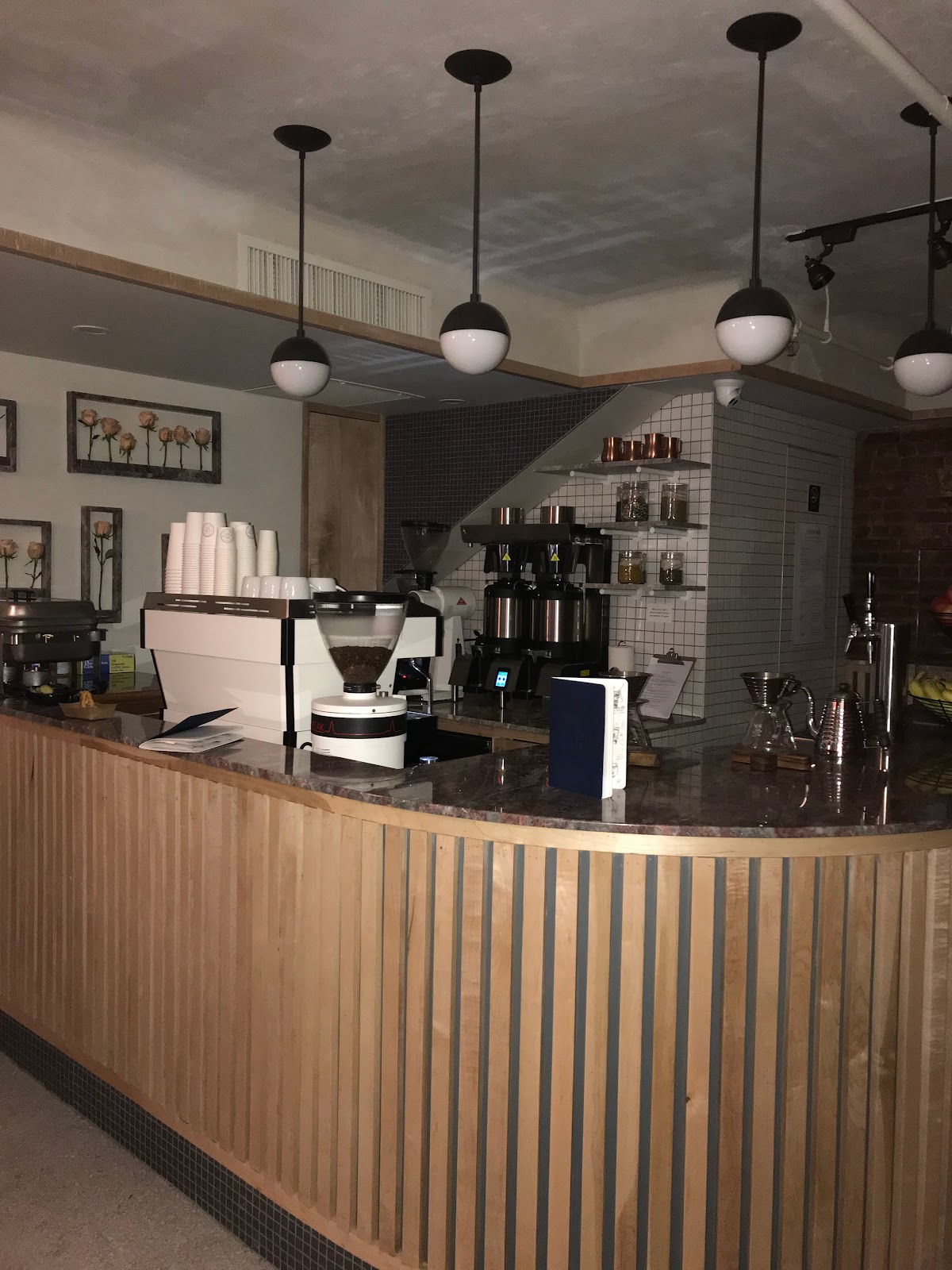 More about PATENT PENDING
After 5pm, the front, street doors lock and things get a bit more surreptitious, according to Patent Pending. And it’s true!

To access the 34-seat cocktail cave, patrons buzz in at street level.
You have to know the code... 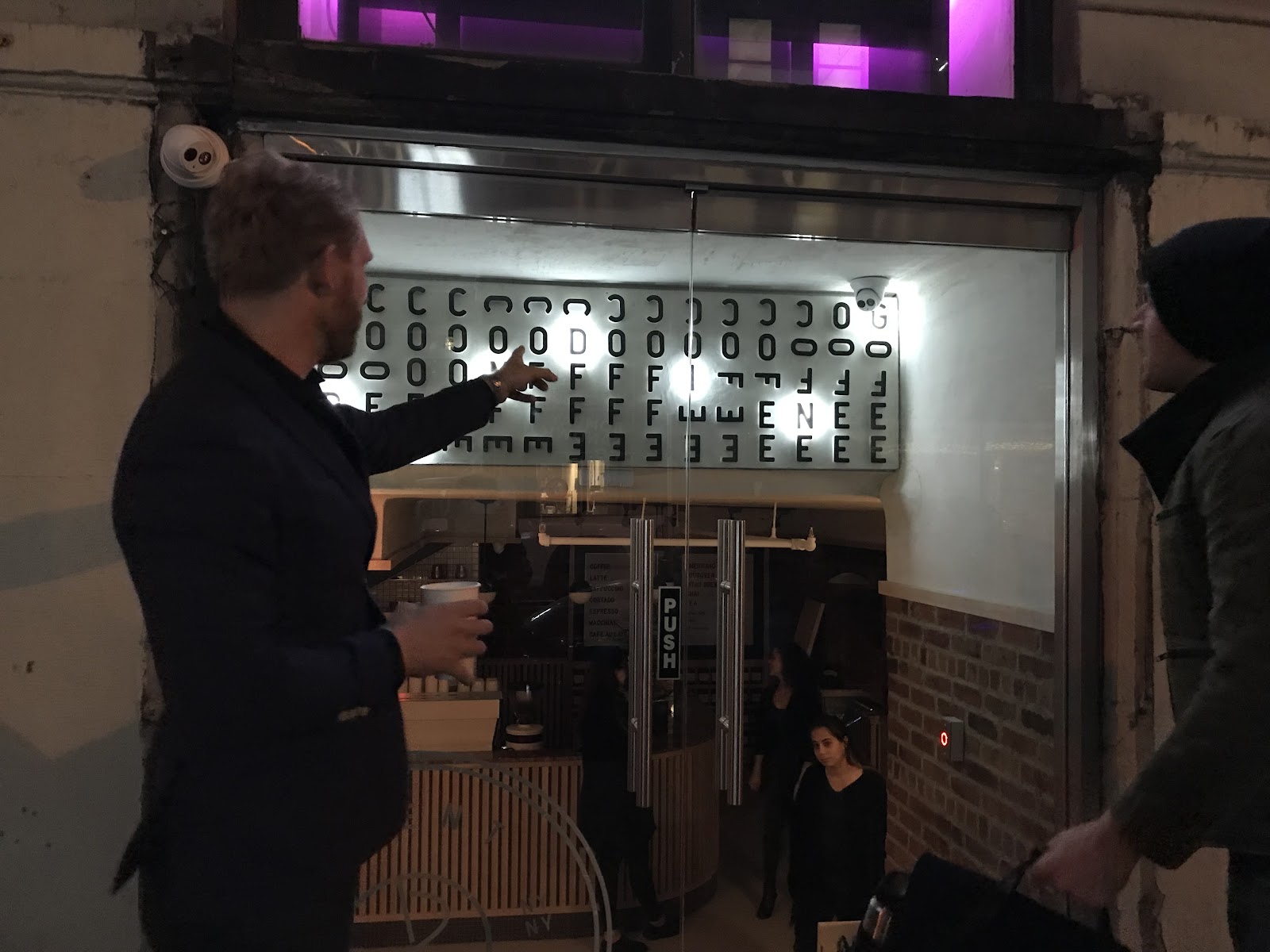 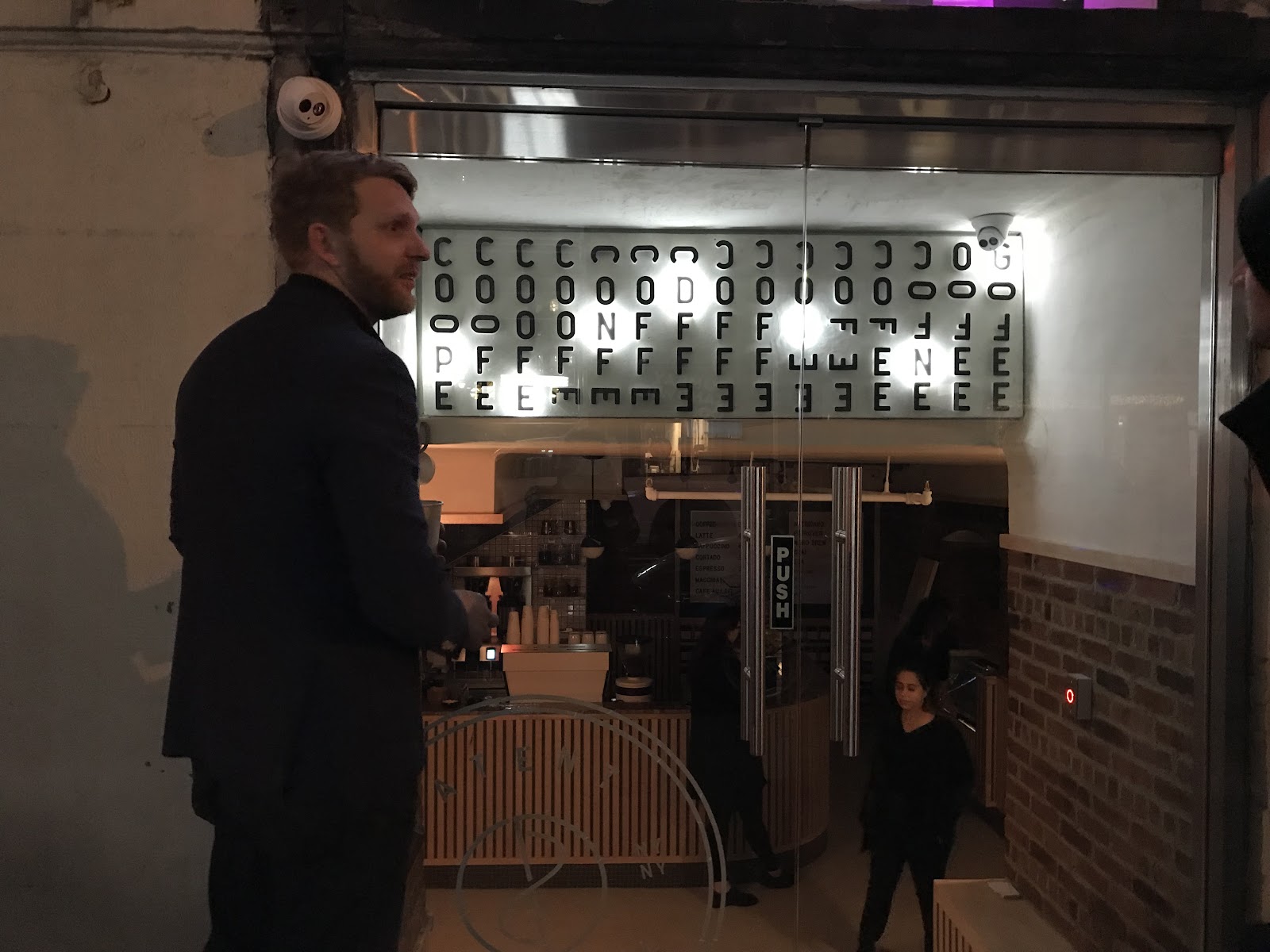 traverse through the what is now a closed-for-business, candle-lit coffee shop and slip through a concealed door. 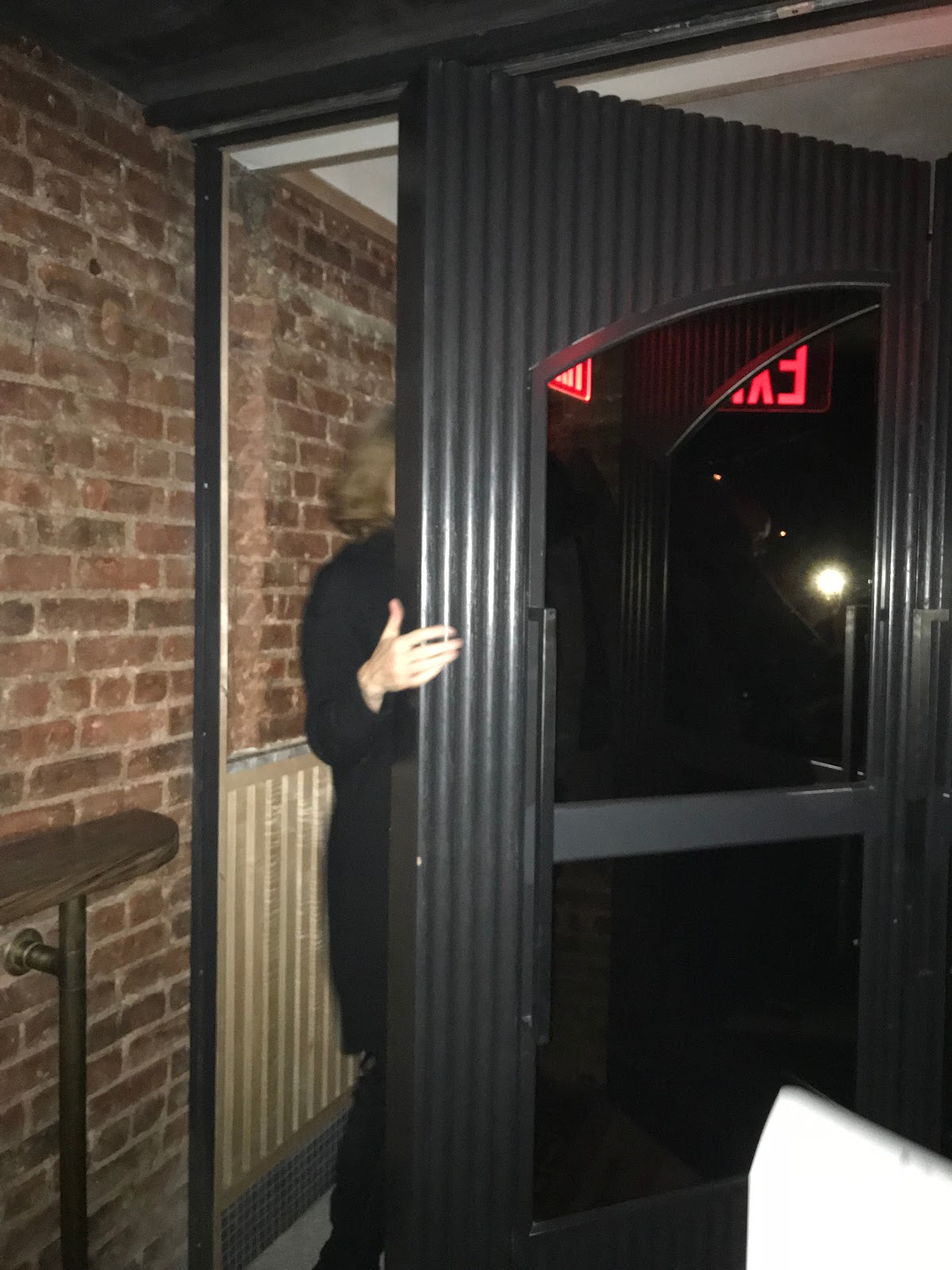 The bifold doors look like a mirrored wall at the back of Patent Coffee.
It’s all very sexy.

Upon entering the dimly lit netherworld, you find yourself in a diminutive, doll-sized “waiting” area that is more like a tiny wine cave.

Just beyond, there is a brick-lined room. 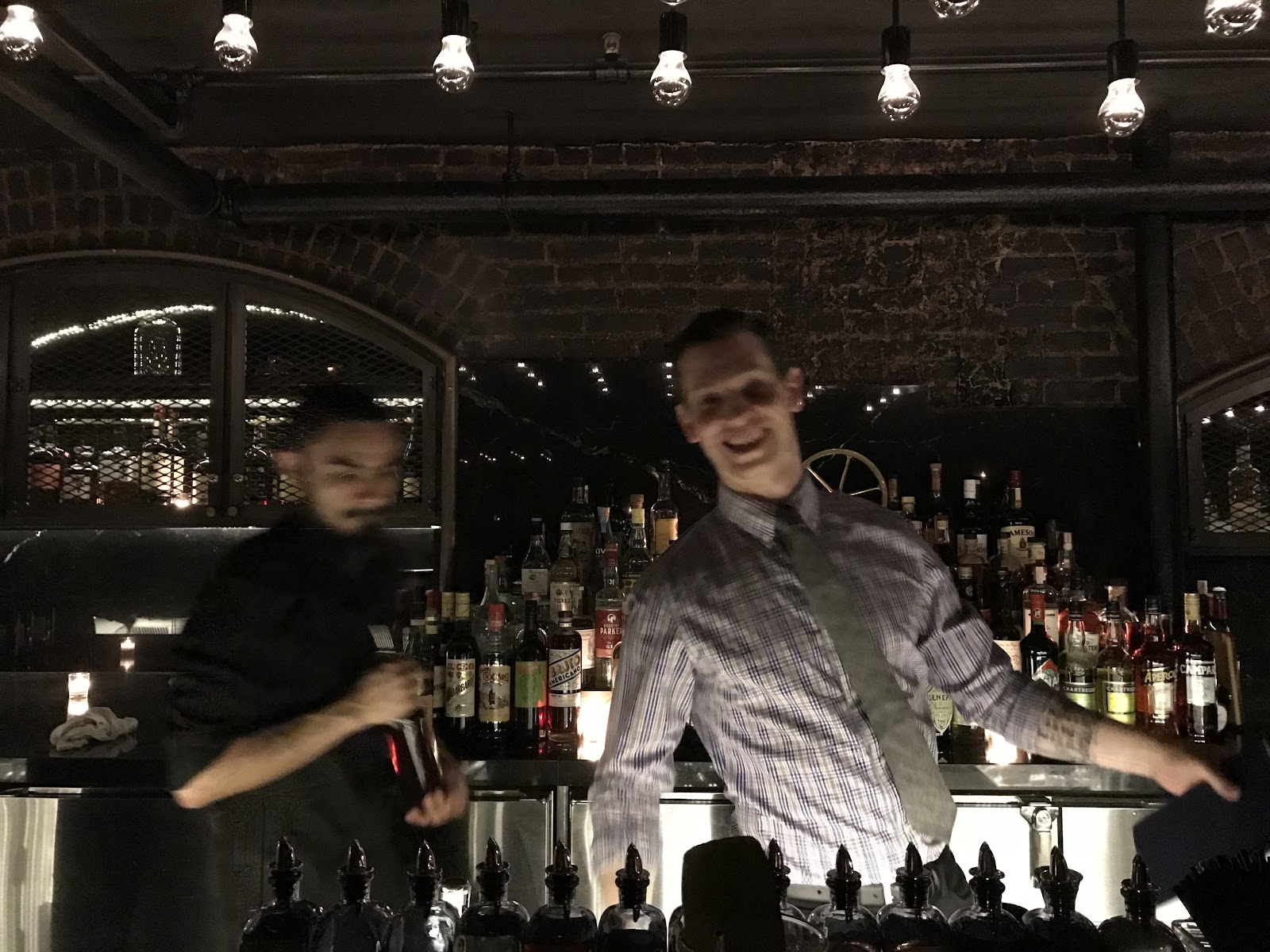 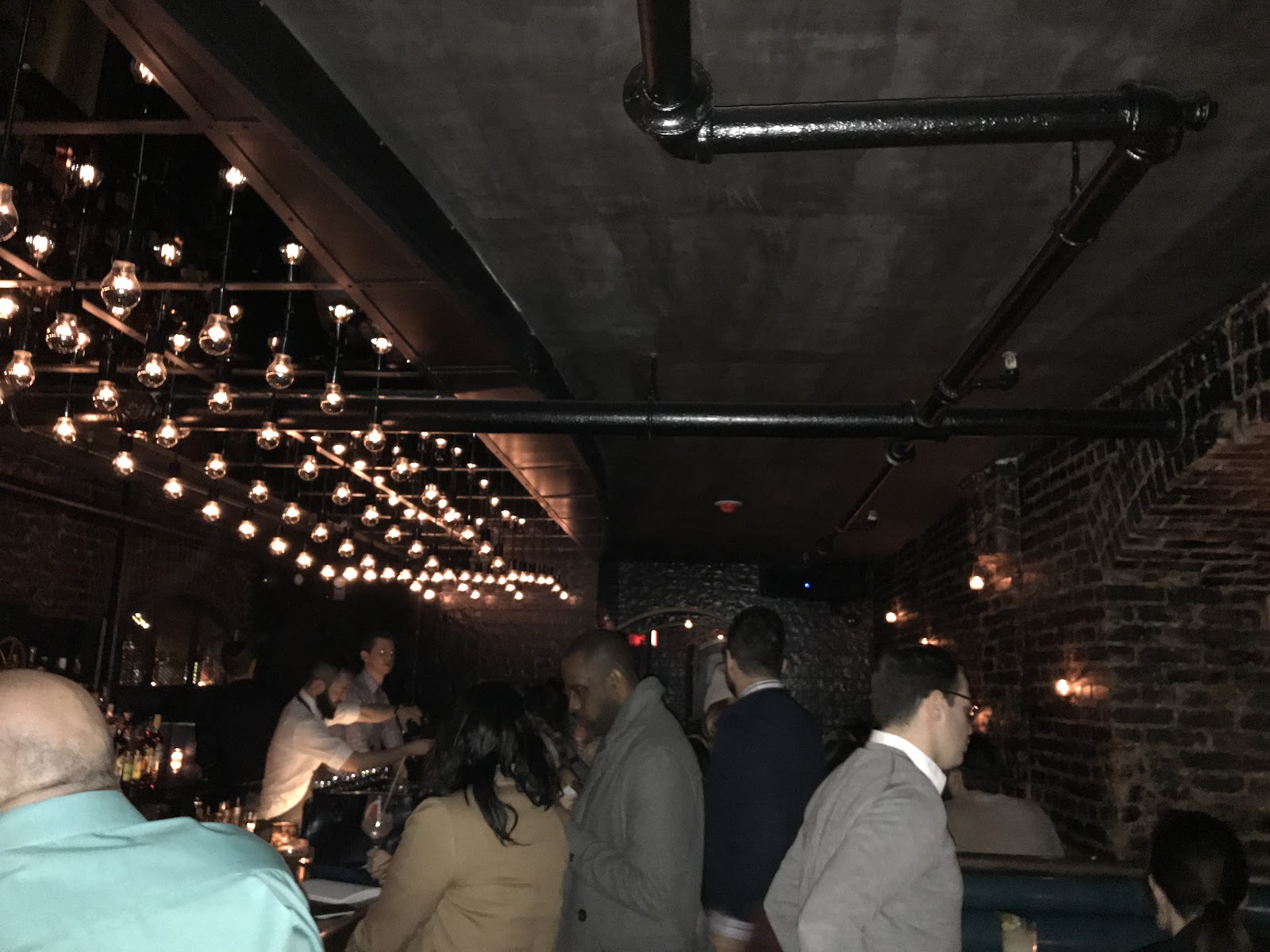 The bar runs the length of Patent Pending - and across from that is a wall of cozy, upholstered, glamorous Corvette-blue diner booths and tables. 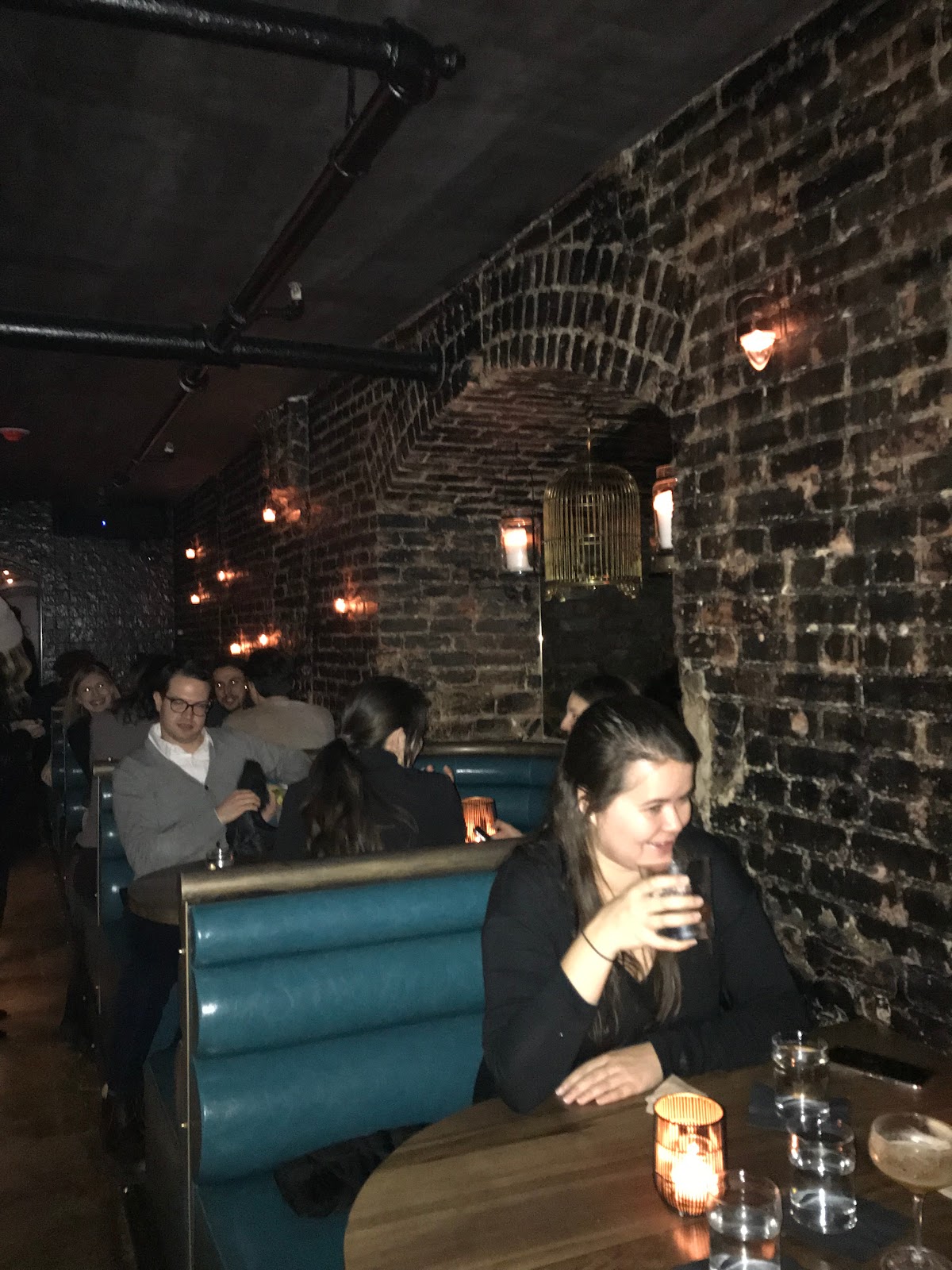 Food is served, however it is more of the fast, casual or comfort food variety - as in grilled cheese and chili, fried chicken sandwich and tomato soup. The owners are respectful of the minimal space, especially in the kitchen. If you want dinner - or have a big party of friends or family - head to their sister restaurant: Oscar Wilde.

The drinks at Patent Pending are the work of craft cocktail heroes, Harrison Ginsberg and Nick Rolin, veterans of Dead Rabbit and BlackTail.
Already, the two pros have embraced the speakeasy’s legendary residents and have divided the cocktail menu into four, Tesla-inspired categories:
There are plenty of quality, creative, craft cocktails to choose from - inspired by Tesla and the radio energy.
Harrison explained how he was wooed by Ryan to join the Patent Pending team from such a pedigree as Dead Rabbit and Black Tail.
Since Ryan had me at “Hello” - I could readily understand how Harrison was charmed by his bar customer - and story-telling imbiber.

Seems Ryan peaked his interest with the space’s narrative. “I was captured by the stories,” stated Harrison. And once he saw the space, he was bonded to the intriguing history.
It was pure fodder for a cocktail artist like Harrison - and Nick. “I love stories,” said Harrison. “Me too,” I added. After all, I’m a writer…

The cocktail menu will change with the seasons, according to Harrison.

Standouts cocktails from the new menu include:
We were also thrilled to test out a coconut milkshake concoction - Currents & Coils - made with a few rums and malted milk, served in a tall pilsner glass adorned with a banana leaf garnish and a sprinkling of fresh nutmeg. The spice offered a warm, aromatic and woodsy aroma and a whisper of flavor. 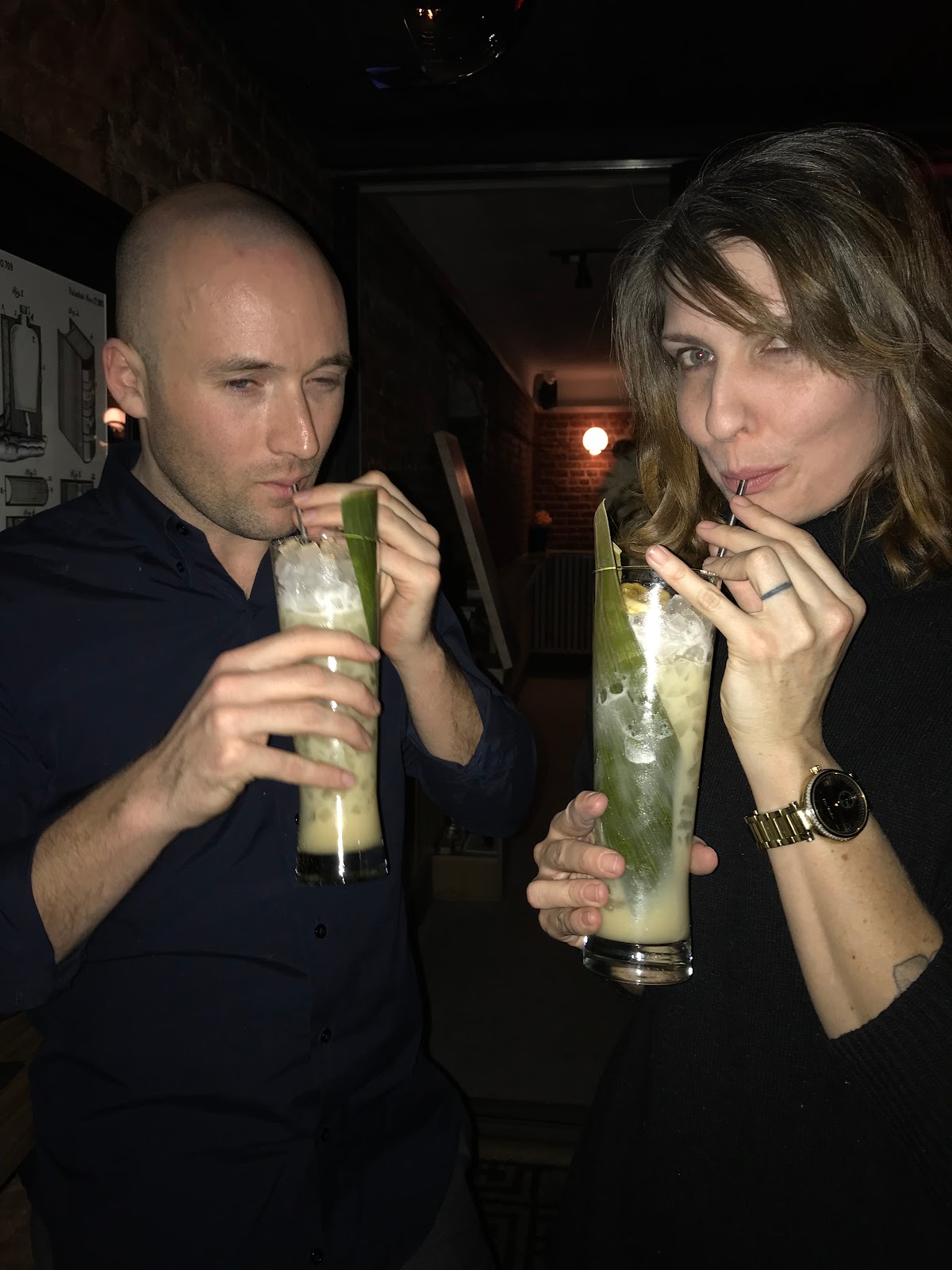 Beer, wine, and sparkling wine, if you want to play it safe.

I highly recommend Patent Pending for a fun, delicious cocktail composition and an evening of great stories. After all, you can get a good drink at a number of award-winning establishments - but here is mystery, history, and seductive craft cocktails.

Patent Pending is the “hat trick” of cocktail speakeasies. Plus architecture and design that reeks of mystery and history and canoodling...

You must immerse yourself in this experience.

And another Tesla nugget for the takeaway: Patent Pending’s menu is a graphic delight filled with entertaining facts and factoids - along with the requisite drinks and eats. It’s a high-end kind of magazine salute to the space and the offerings. 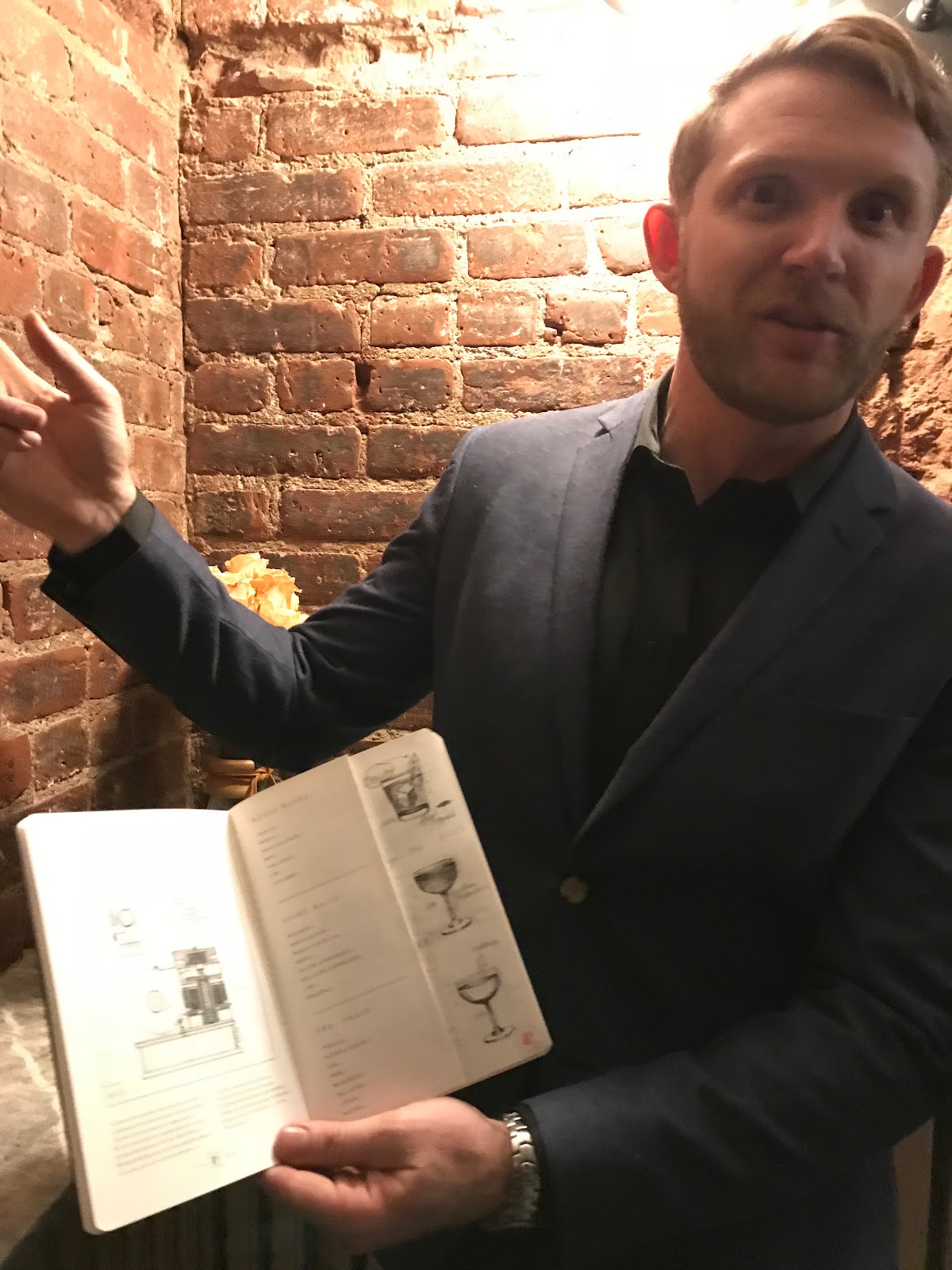 So it seems that Tesla was a law-abiding “man of principles” who abstained from drink as long as it was forbidden.”

Thank goodness for the end of Prohibition.

Designed by: Carpenter + Mason in collaboration with Simmer and built by Cocozza Group