All Aboard! NYBG’s Annual Holiday Train Show® Powers Up Saturday, 11/23 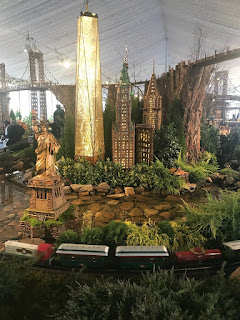 At Tuesday’s Sneak Preview for the Press, we were given an overview and a guided tour through the new exhibit, led by Karen Daubman, Associate Vice President for Exhibitions and Public Engagement, NYBG and Laura Busse Dolan, President and CEO, Applied Imagination. Laura’s father Paul Busse is the original creator and craftsman of the plant-based art exhibit.

Greeting us and kicking off the press conference was NYBG’s president, Carrie Rebora Barratt, a garden glamour icon who never disappoints. Tuesday, Barratt was wearing Comme des Garçons.
It’s tempting to suggest that Barrett and her style always strike me as gilding the lily. I love it!


The press had been huddling, broadcaster cameras set up and ready, 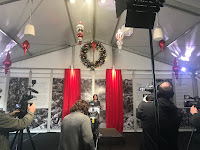 while tasting treats from Bronx Night Market. The red velvet miniature cupcakes with their rosette flower icing from Cozi Treats were perfect, as was her creme de brulee. Thank you, Sheri. 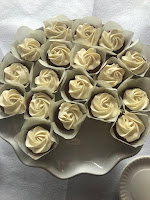 While Barrett spoke, we could hear the trains running on their tracks in the room next door. It’s important to note that the Train Show is a very immersive, transporting experience that tickles the senses. It also needs to be mentioned that the Train Show is not in the Conservatory, as usual. It’s regrettable because nothing can top being in a greenhouse. In the winter. With its incredible oxygen boost and lighting magic and sense of mystery. Yet alas, the Conservatory is under construction so the Garden has built a series of rooms in front of the iconic Enid A. Haupt Conservatory.

You have to suspend the feeling that this is too akin to a mall holiday presentation. Don’t be tempted. I recommend looking at the displays - really looking, No one, nowhere - can create these kinds of displays — all made from plant parts! Once you grasp that element and embrace the fact that these compositions are made from birch bark and limbs (more than 500), lotus pods, fungi, acorns, cinnamon sticks and more - not to mention the landscape design of moss (more than 200 boxes of North Carolina moss), berries, ferns, conifers, waterfalls, red-twigged dogwood, and hollies to mimic nature - you will be smitten - and transported. Of course, so will the kids. 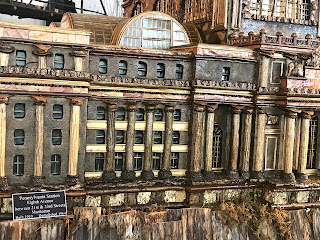 This year, there are more than two thousand plants in the exhibit - double previous years because they needed to accommodate the new space and were not creating the composition with the benefit of the existing Conservatory plants that are part of the permanent collections.

It was pointed out that the buildings are not constructed on a one-to-one scale but rather from a perspective - in order to create a much more experiential approach. That is artful design …. The Imagination team researches the history of a chosen building, secures dimensions to render the building in plant parts, then builds the base, continues the embellishments and architectural details.

The show begins with a video on two screens in two separate theaters, right off the queuing area, where you can park strollers, etc. The video’s give you an idea of how the artists at Applied Imagination research and create these plant-based wonders.
Then, you step into the miniature metropolis.
The first one you see is the NYBG Haupt Conservatory. Seems fitting.
Overall, there are nearly 200 landmark displays in the show. 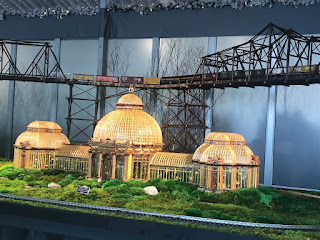 There are compositions at three levels, low, mid or eye level and above - with trains traversing and zipping about seemingly everywhere. In the Holiday Train Show, more than 25 G-scale model trains and trolleys hum along nearly a half-mile of track 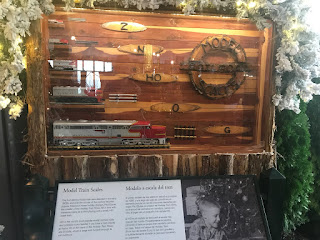 All the featured buildings have labels, citing the year it was built, the address, and in the case of misguided civic management where the building was torn down, such as Penn Station in its glory days, the date of demolition is noted. And when you think about it, the long-lost landmarks are the secret sauce of the show. You get to see what no longer exists… Every borough of New York is represented, in addition to the Hudson Valley.

I love the whimsy of Coney Island (and never having visited, the composition makes it a place of dreams): 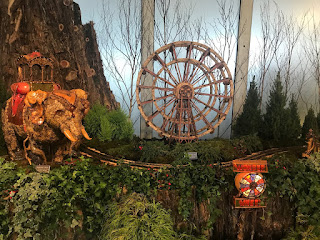 And the otherworldly charm of the Hudson River School and one of its leading painters, 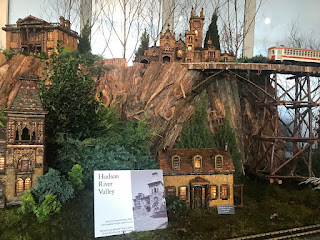 The TWA Building is getting its due of architectural love of late and here at the Train Show, the gateway to flight transport is a standout. It was pointed out that the roof is a giant coco lobo plant! 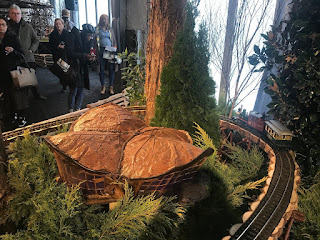 Look at this cherub on the parapet of Kykuit: 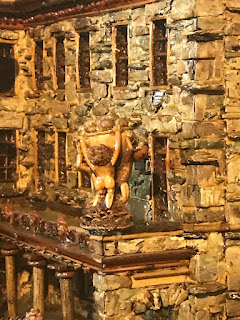 Look at Macy’s department store awnings - made from gourds; the Macy’s logo made from barley and red pepper flakes: 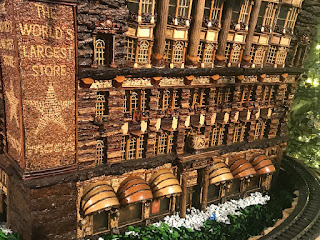 Look at Yankee Stadium - it has its own corner - and Thomas the Tank runs circles around the stadium! 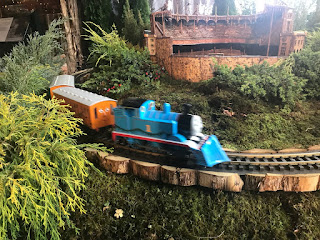 The new replicas of Central Park’s architectural treasures, including Belvedere Castle, Bethesda Terrace, the Naumburg Bandshell, the Dairy, and two graceful pedestrian bridges are along one side of the show - with graceful, lacy, white birch branches as backdrop. While lovely in the day, I can only image the twinkling dream at night… 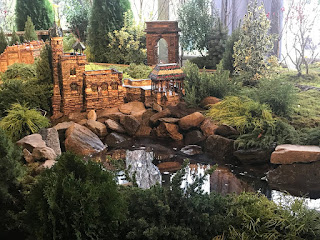 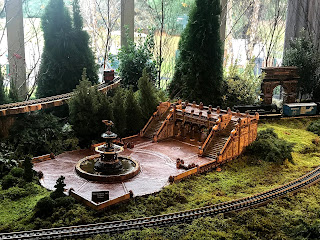 The landmarks are arrayed in a tableau with existing Central Park replicas in NYBG’s collection, including the Swedish Cottage Marionette Theater and the Old Bandstand. 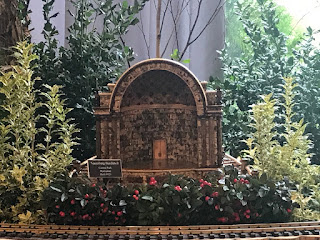 Enjoy this video of Central Park at the Garden:

In addition, famous New York buildings that are either next to the park or just inside it are on display, including the Plaza Hotel, the Metropolitan Museum of Art, 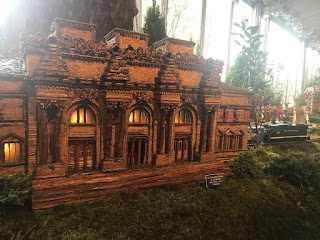 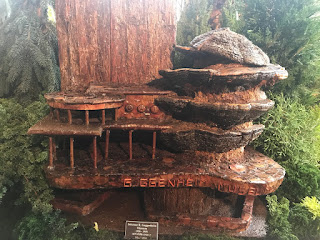 And the Rose Center for Earth and Space, part of the American Museum of Natural History. 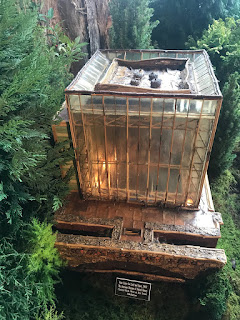 By the way, all the “windows” in the landmark buildings are made from poured resin.

NYBG provides this interesting background to the Central Park Landmarks:
“The Belvedere Castle was built as a Victorian “folly” on the highest natural elevation in the park, offering visitors a “beautiful view”—the English translation of its Italian name. Completed in 1872, the turreted castle includes Gothic, Romanesque, Chinese, Moorish, and Egyptian motifs. In June 2019, the Belvedere reopened after a 15-month restoration. Bethesda Terrace opens on the Lake at the heart of Central Park. The 1873 Angel of the Waters sculpture crowns the Terrace’s majestic Bethesda Fountain. In one hand, the angel holds a lily, a symbol of purity. Designer Emma Stebbins, the first woman to receive a public art commission in New York City, likened the healing powers of the angel to that of the Croton water system, which brought clean, fresh water to the city beginning in 1842. The Dairy, built in 1870, was intended as a place where children could enjoy a glass of fresh milk, which was not always easy to get in mid-19th-century New York. The hybrid design is a playful combination of a Swiss chalet and a Gothic country church. The Naumburg Bandshell, a neoclassical structure of cast concrete built in 1923, has hosted performers from Irving Berlin and Duke Ellington to the Grateful Dead. The Swedish Cottage Marionette Theater was Sweden’s exhibit at Philadelphia’s Centennial Exposition in 1876. The enchanting Swedish architecture and craftsmanship, suggestive of a model schoolhouse, caught Olmsted’s eye, and he brought it to the park in 1877. A theater designed for marionette performances was built inside in 1973. The Old Bandstand was a 1862 Victorian-style cast-iron bandstand designed by Jacob Wrey Mould. It was demolished in 1922 to make way for the Naumburg Bandshell. Also dating from 1862 is the graceful Bow Bridge, the first cast-iron bridge in Central Park. Spanning the Lake between Cherry Hill and the Ramble, its subtle shape is reminiscent of the bow of an archer or violinist. Designed by Calvert Vaux and originally built of white oak, Oak Bridge crosses Bank Rock Bay and is a popular destination for bird watchers.

Enjoy this video of the Holiday Train Show

While there’s no doubt the annual Holiday Train Show® is the centerpiece of the Garden’s winter extravaganza, don’t overlook the lineup the Garden has produced -- it’s chock-a-bloc loaded with fun, cultural, and education elements, including Evergreen Express, Sounds of the Season Performances, films, Bar Car Nights, and more,

Here are some highlighted events, activities, and programs that are scheduled during the exhibition: (please check NYBG’s web site for a full listing.)

True garden glamour is waiting for you at the Garden. 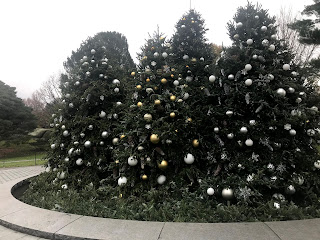 Email ThisBlogThis!Share to TwitterShare to FacebookShare to Pinterest
Labels: #ArtfulGardens, #plants, gardens in winter, New York Botanical Garden Holiday Train Show overview, NYC Holiday exhibits, Things to do for the Holidays in NY, What to do in NYC in winter, where to go in NY
Newer Posts Older Posts Home
Subscribe to: Posts (Atom)