It was last week while reading Lindsay Morris’s Instagram notice that I first learned the surprising and sad news that KK Haspel had died.

KK is a featured grower in my book: The Hamptons & Long Island Homegrown Cookbook.  And Lindsay is the over the top photographer who contributed those luscious, food narrative images to the book.
As fans of the Homegrown Cookbook know, I asked each locavore chef, “Who inspires you most?” and then wrote a profile of the chef and the grower or maker who’s delicious ingredients ignited a culinary creation.  From oyster growers to vintners to honey makers to tomato growers, the bounty of Long Island fostered a growing culinary renaissance.
Truth was, KK was selected by more than one chef as inspiration.
It’s no wonder.

Just interviewing her was kinetic.  Her passion and energy nearly sparked the handset.  Words, descriptions, organic practices, and successes that transformed her life came tumbling out like molten lava bent on changing the landscape.
I almost couldn’t take notes fast enough.
At one point while explaining how she douses with her plants, she paused, saying, “You must think I’m a little nuts, talking to my plants.”
As a gardener and confirmed plant person, I thought she was joking. Silence. When I could sense a reply was needed on the table, I recovered and reassured her, “You are preaching to the choir!  I am in complete simpatico: I understand and agree!”
We continued.

But here’s the thing – KK did so much more than “just talk” to her plants.  She had a full-on frontal relationship with them. 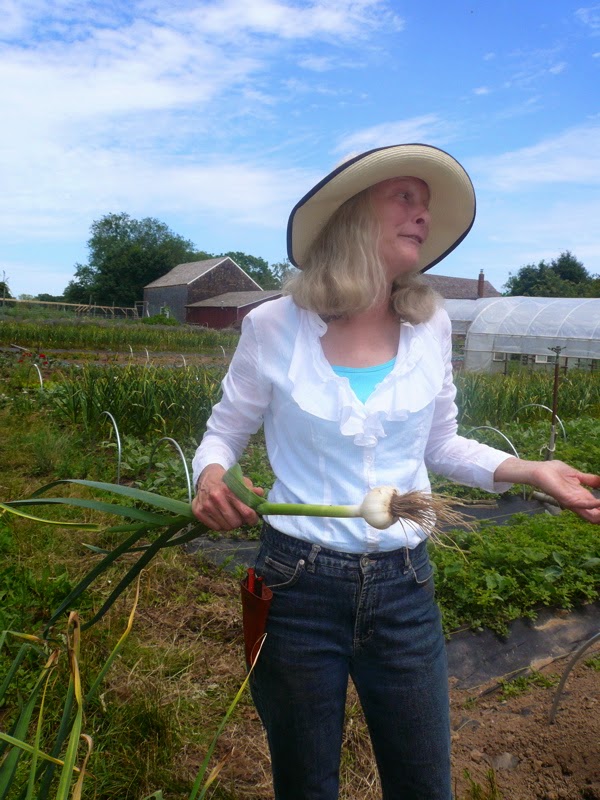 While on the Homegrown Cookbook’s photo shoot at The Farm with Lindsay, KK, chef Robby Beaver from the Frisky Oyster, and KK’s husband, Ira, we were all enthralled by KK and her exuberance and garden power – and elegance. She was in her element. She was fairly waltzing with the plants: barefoot! 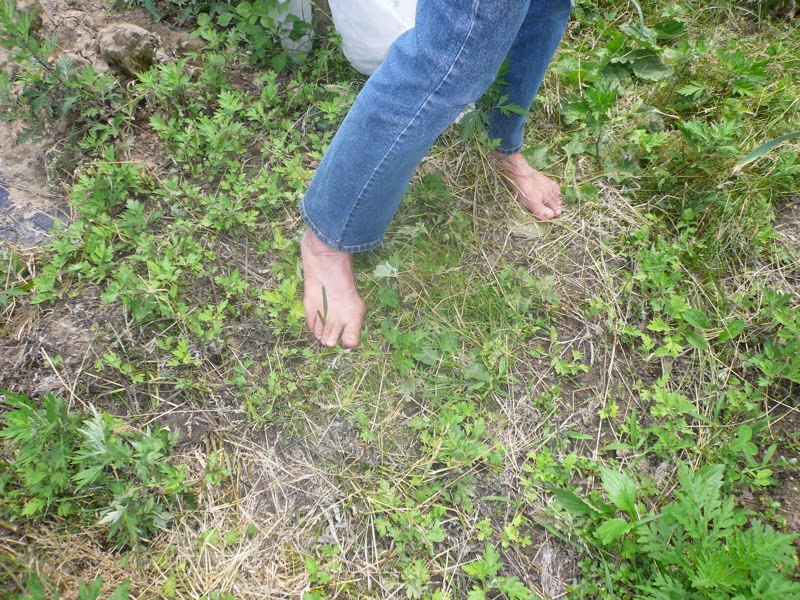 KK not only walked her raised beds magic garden with us she also showed us her labyrinth-like maze where we watched her walk her fascinating and somewhat mystical creation. 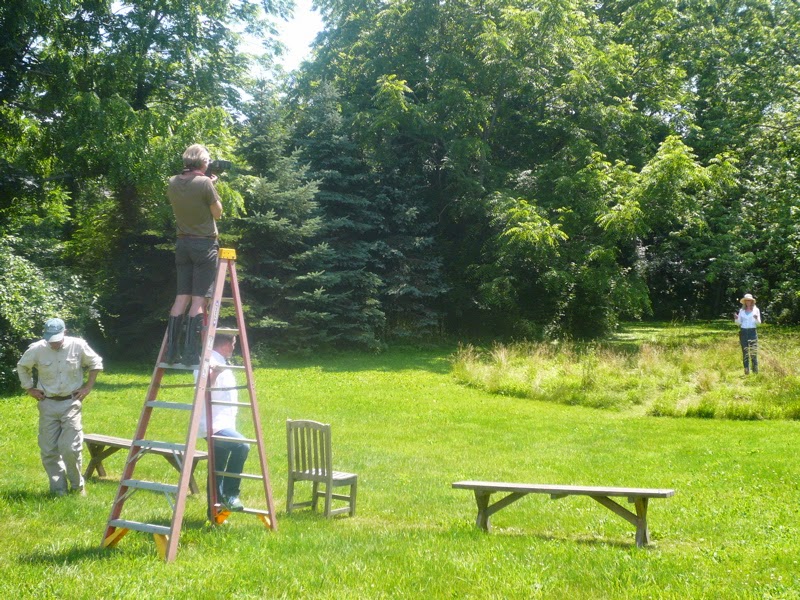 I wanted the Homegrown Cookbook’s images to suggest the special and enduring relationship a chef has with his or her grower and in addition, the grower’s relationship to the land or the sea from where they harvest. 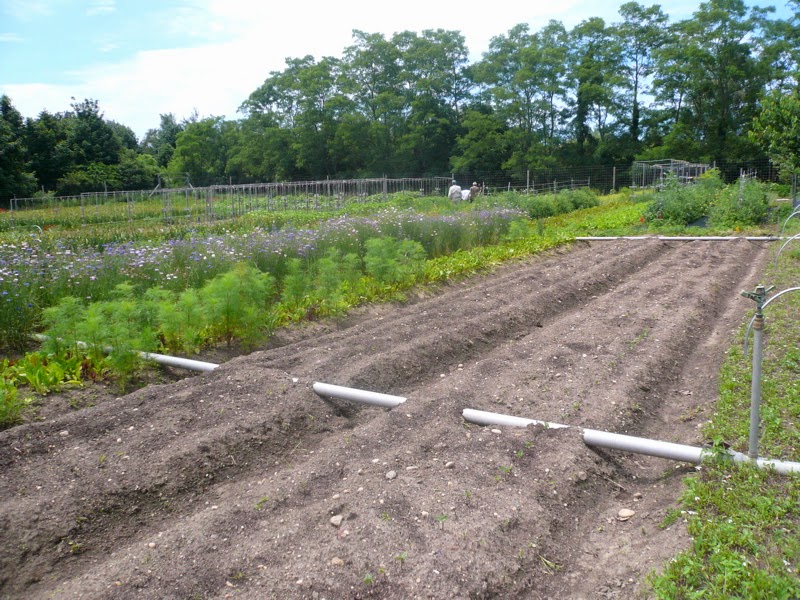 Of course Lindsay captured all that horticultural, culinary respect – and more.

This photo is just about my favorite one showing that mutual respect - I've used it often in news stories: 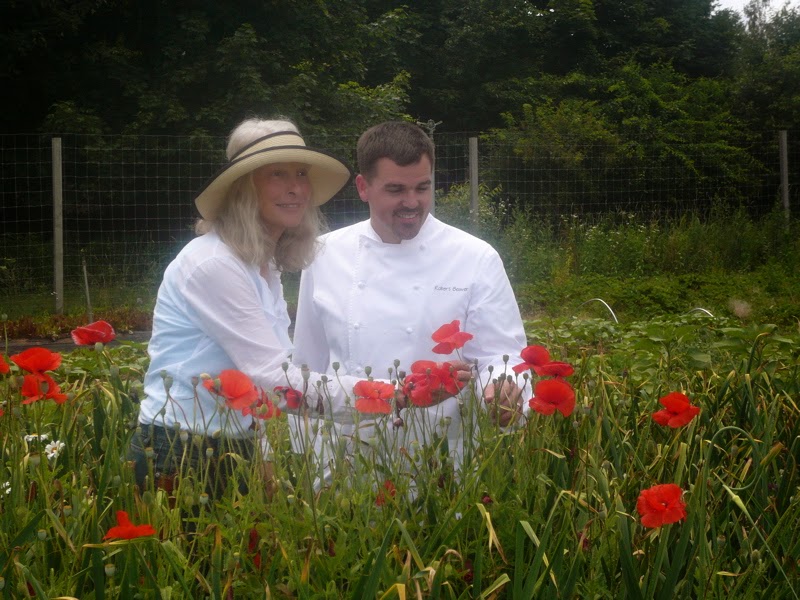 Separate from the work for the book, on more than one occasion that afternoon, I watched Ira as he basked in his wife’s beauty, spirit, and ability to almost cast a spell on all of us.


I couldn’t but say, “You are so lucky. She’s so incredible and beautiful” Without taking his eyes from KK, he said, “I know.”
So I had to ask, “How’d you meet?”
He went on to describe how he was bewitched by her beauty and charm the first time he laid eyes on her.
But he said she was a bit too young for him at that time, so with patience and devotion, he waited for her to grow up…

She may have clicked off pages on a calendar but clearly she’d kept that child-like curiosity and unbridled enthusiasm.
It too was an enduring love affair all those married years later as one could easily see just watching Ira watching KK.

All that magic and mystery was only enhanced as she later demonstrated her dousing prowess with what looked like two sorcerer’s wands. 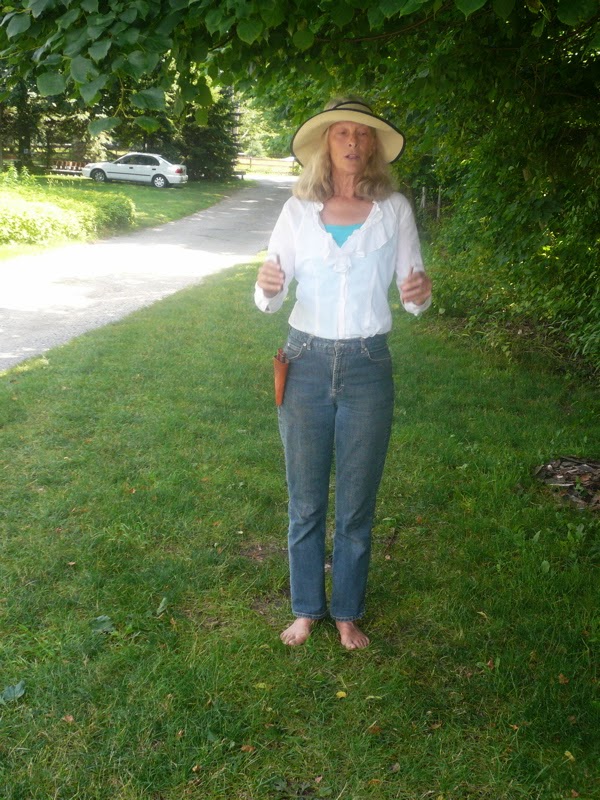 Then, some real hocus-pocus was evident when she showed us a photo of her using the ancient art of dowsing her plants.  It was abundantly clear to see a rainbow of color effect that was readily visible in the image. It revealed the plant's communication energies, telling her where and when to plant. “This is not altered or retouched,” KK exclaimed. 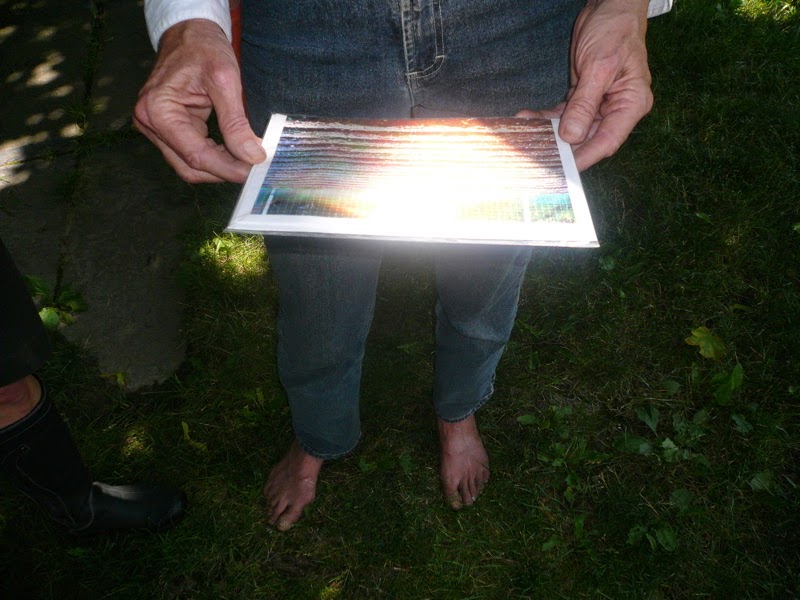 Now we could see her “Technicolor vision,” too. 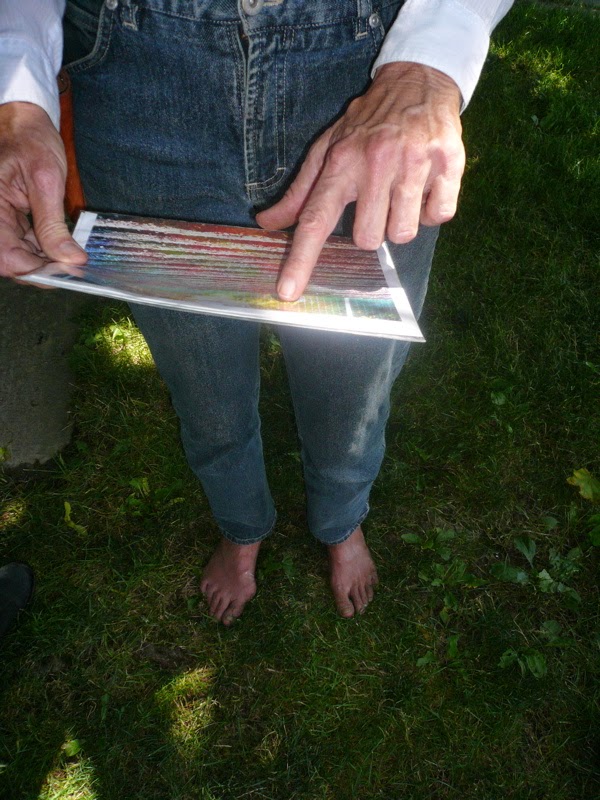 After we concluded the photo shoot on that warm, late June afternoon - we all sat under the big tree in she and Ira’s backyard, drinking her homemade Kombucha. 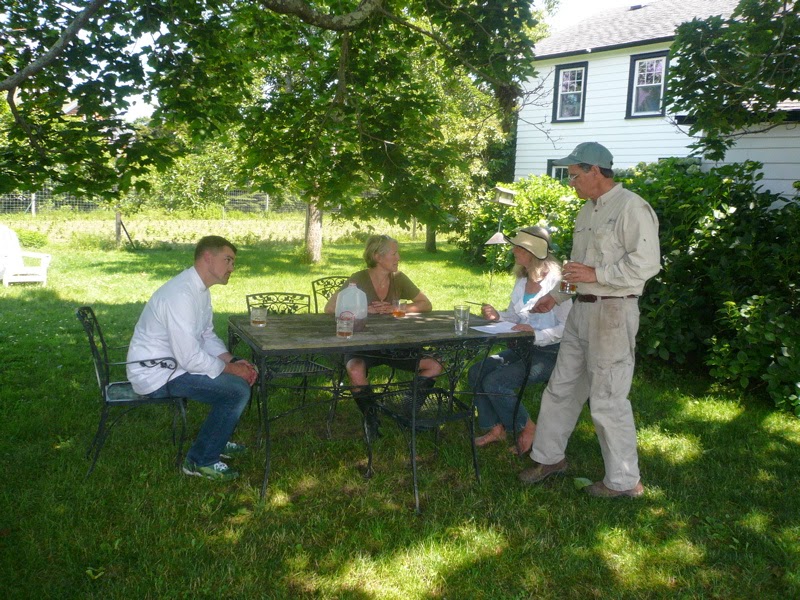 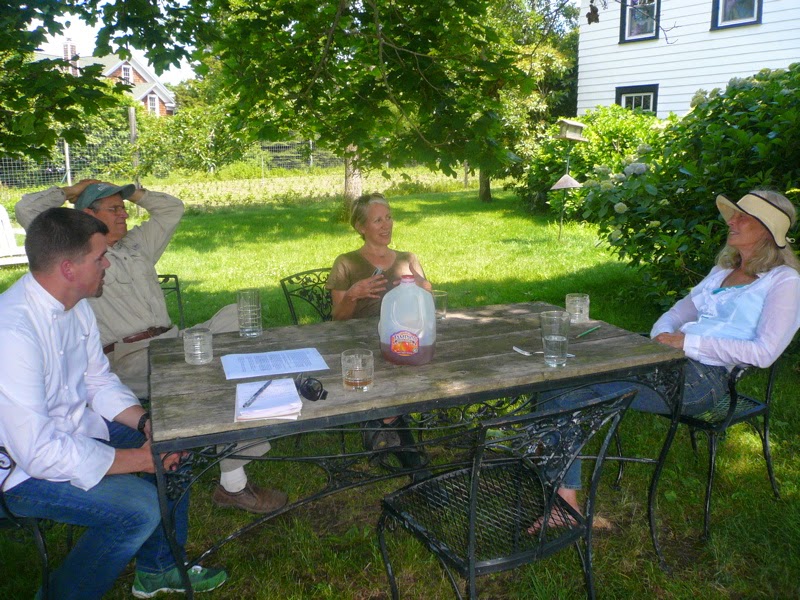 The only way I could think to pay some tribute to this extraordinary woman is to tell her story.
Below is the draft of KK’s profile before it was edited down to fit into the Homegrown Long Island Cookbook.

I hope you enjoy reading it.  And I hope you can carry on the good gardening and farming practices KK espoused and demonstrated.

KK or Kathy Keller was destined to be a biodynamic farmer.
She gushes giddy enthusiam recalling when she and her architect husband advanced the long driveway to what is now The Farm. 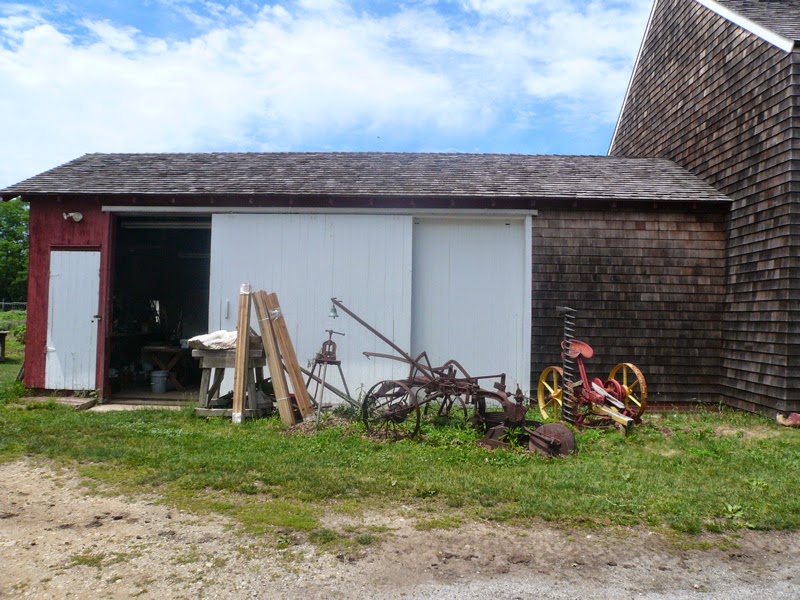 They had been looking for more than a year for a getaway, second home on the North Fork.  All they wanted was a barn, a hammock, and no phone.  But nothing they’d seen until then met the expectations of the couple.

Like an impassioned lover, she couldn’t see the optics as they were: sagging, abandoned barns leaning back towards their 1700’s heyday and abandoned fallow fields.
KK had what she refers to as her “Technicolor Vision.” She “saw” zinnias and sunflowers and wildflowers.  Before she could hatch a plan to convince her husband about the Wizard of Oz-like color transformation magic of this place, she heard Ira telling the real estate agent, “We’ll take it.”
It wouldn’t be the last time KK heard unexpected “voices.”

There was no mistaking the immediate, kinetic connection to the land: like a mother to a child, KK couldn’t wait to plant on their 5-acre Brigadoon.

The flowers were indeed inspired. Following local tradition for the bounty of the harvest, she put out the “extras” on a stand at the end of the driveway. 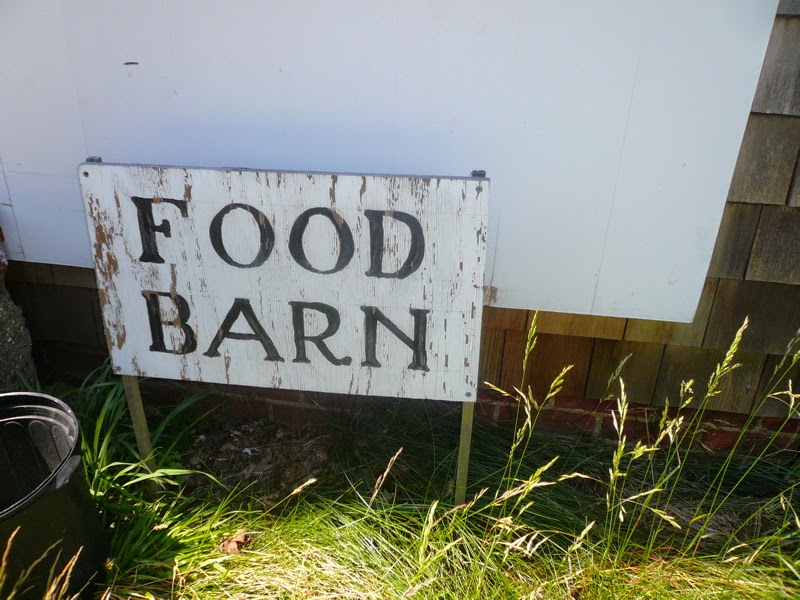 People loved her flowers and extra vegetables. “They’d tell me --those were great vegetables -- how about some more. “  At the same time, she was getting more seduced by the need for organics and soon enrolled in a two-day intensive organic course in West Hampton at  “The Nature Lyceum.  “The class changed my life.” She learned about organics and biodynamics – the first step on the way to the Zen of farming.

KK’s plants paid her back in spades.  The cosmic soil responded. 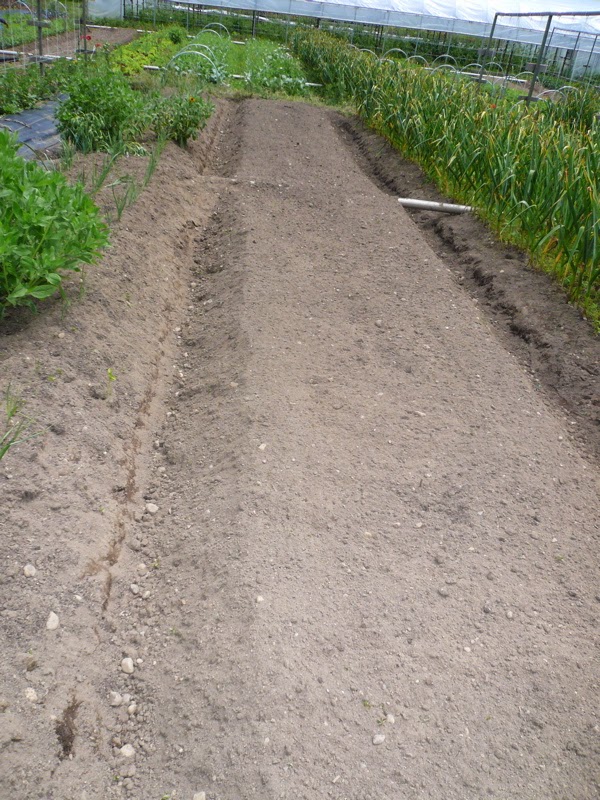 According to KK, biodynamics can transform and restore the planet. “Every day, people used to eat some of their own soil - it was the natural probiotic.” KK points out.”  The unspoken implication is it should be the healthiest soil available. She says biodynamics can grow inches of topsoil in a few years, helps the produce last longer by two to three weeks and imbues the food with more nutrition. The microbiotics in the soil make for a unique and powerful food source. Everything at the Farm is grown in 50 -70 tons of biodynamic compost--all in raised beds.  KK is very intense with her planting. 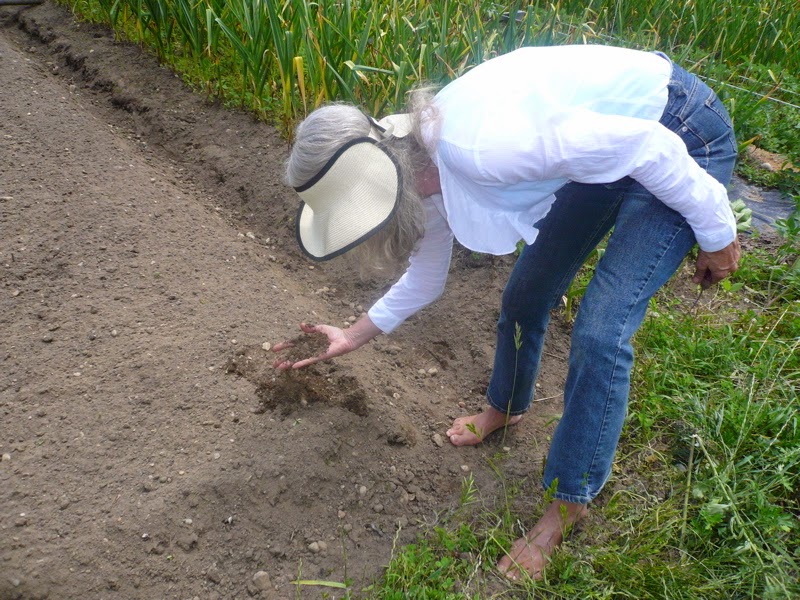 KK also does a lot of dowsing. She talks to her plants.  They talk back.
“The plants tell me what they need.  They know what their purpose is – they want to give you the best food and seeds,” explains KK.  “Biodynamics helps mediate that conversation.”

KK has a devoted chef following.
Chef Gerry Hayden, James Beard nominee, co-owner and executive chef of nearby The North Fork Table & Inn restaurant, was the first to put KK’s name on the menu, which in turn, further attracted a loyal food-worshiping cohort.

Emblamatic of KK’s Relationship to chefs is that of Robby Beaver, The Frisky Oyster. Robby first visited KK because it was near his father in law.   “The chefs are true artists,” says KK explaining their sensual connection to food and farm.  “They see color and texture; experience taste. Chef Robby frequents the farm tasting this and that, drawing his inspiration walking the field together with KK.  She says she learns what creative chefs like Robby and Gerry like and what they can use and then plants it.

KK likes to grow what’s easy; standards like garlic and tomatoes. She also likes growing “new” things. Like okra and collard greens.  But to KK, the new things are a little like going home. In fact, she took to growing them, as she wanted to grow some things from her mother’s native area: New Orleans.  Her parents met when her father was quartered at her mother’s boarding house during WW II. After the war, the couple moved north where she grew up with her two brothers in Oak Beach in Rockville Center.

KK recalled she started working with the area’s homegrown chefs when the North Fork Table’s Gerry Hayden and Claudia Fleming were opening up.  KK fondly remembers a food moment when chef Claudia presented she and Ira with one of her James Beard award-winning desserts, saying, “Let me show you what we can do with your stuff.” A memorable blackberry tart was forthcoming. "They waited on us on hand and foot!”

The Farm grows everything from seeds. KK saves her seeds, almost admonishing, “They become your own seeds.” She lovingly described her garlic. It’s been nourished by KK, taking in nature's energy, acclimating and accommodating its own special terroir.
KK, along with Ira were soon managing half a dozen interns at various times in a season.  They gave workshops and talked about the importance of biodynamic farming and eating local. 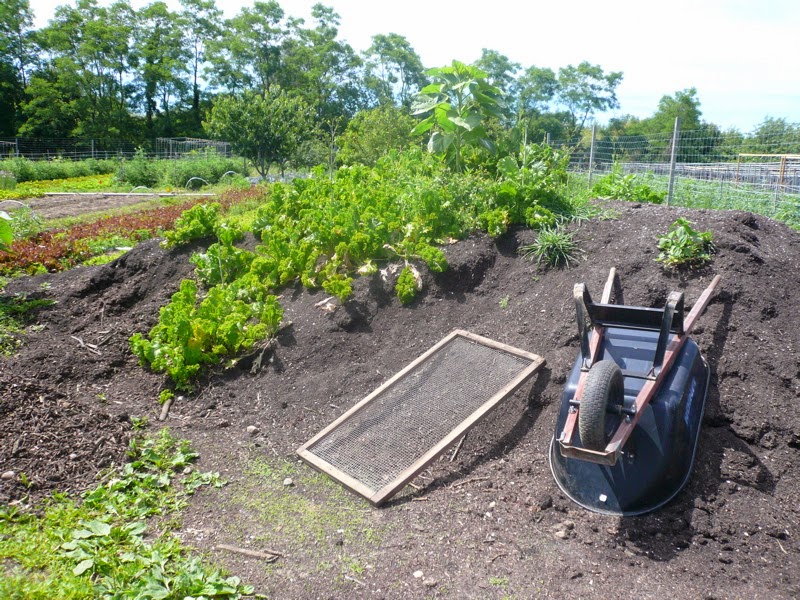 Postscript:
KK was a force of nature and will be truly missed in this world.  She was only 63 and cancer was the kidnapper. KK died October 4, 2014.

I can’t help shake the feeling that like the true garden sprite as was revealed to us, she is really Mother Nature herself – a beautiful, nourishing soul who visited with us awhile in order to teach us and help renew our commitment to sustainability, respect for the environment, and taste.
As noted at The Farms: Healthy Soil = Healthy Plants = Healthy People.

Bless you, KK. It was an honor to know you.  I’m forever grateful that The Hamptons & Long Island Homegrown Cookbook can pay homage to your indomitable spirit. 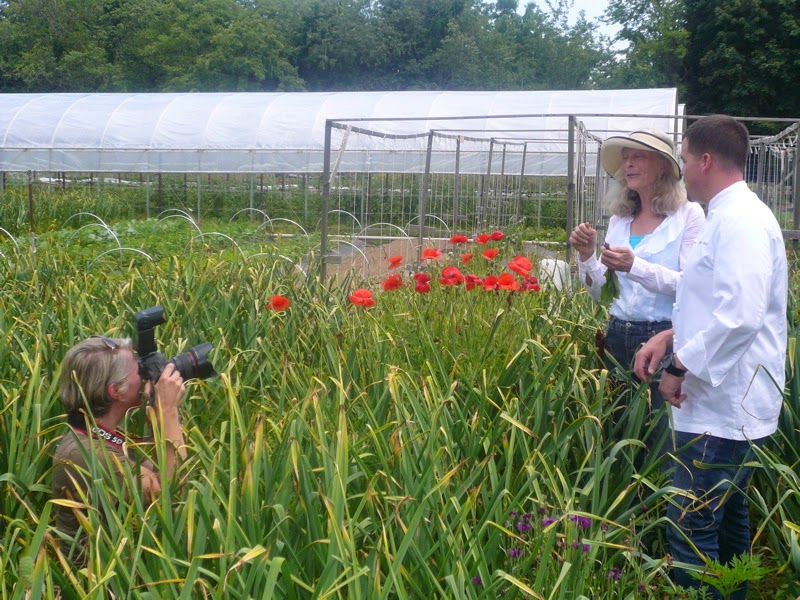 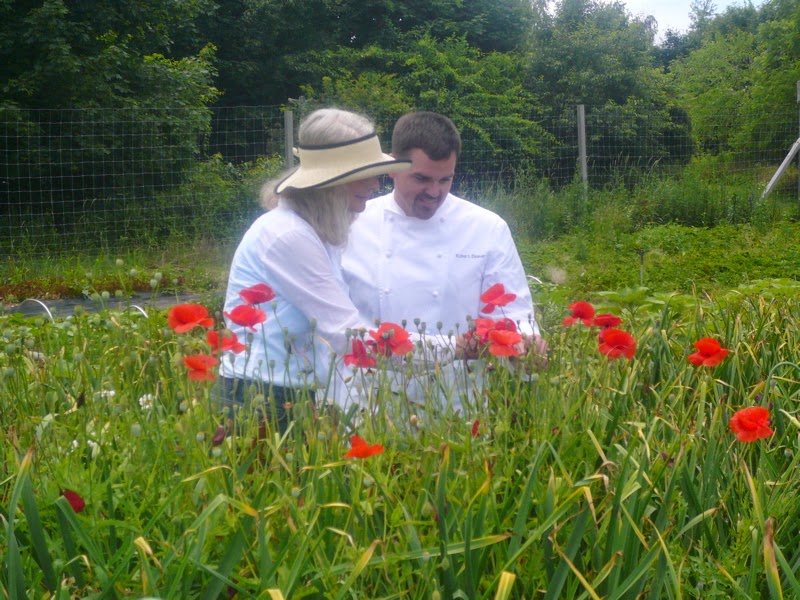 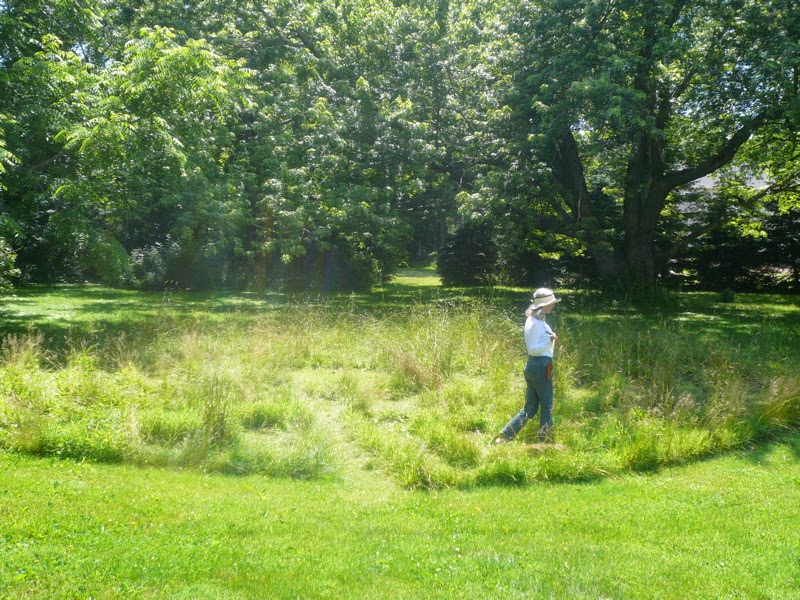 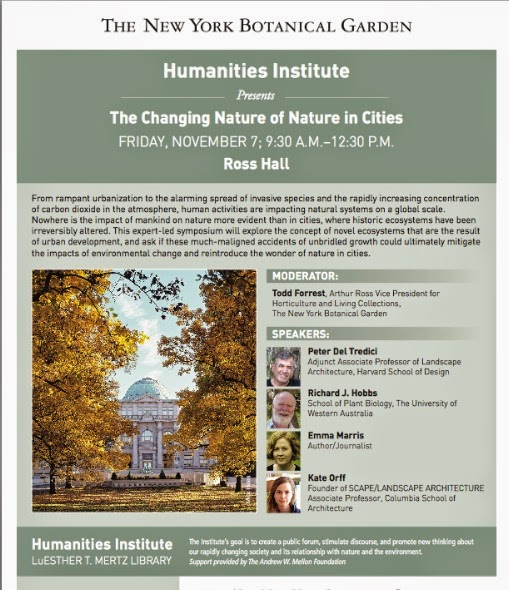 The New York Botanical Garden (NYBG) wrote to me saying  - "Novel ecosystems are a controversial topic you may have seen discussed recently on NPR and in The New York Times.

On Friday, November 7 from 9:30 a.m.-12:30 p.m. the Botanical Garden will host a symposium of experts for a vibrant discussion of this salient issue in The Changing Nature of Nature in Cities.

This symposium, the second of the Garden’s new Humanities Institute, will explore the concept of novel ecosystems that are the result of urban development, and ask if these much-maligned accidents of unbridled growth could ultimately mitigate the impacts of environmental change and re-introduce the wonder of nature in cities.

I'm all all in.
See you at the Garden

Posted by Garden Glamour at 12:19 AM 1 comments