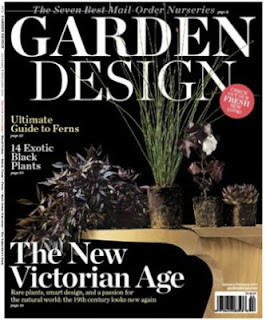 After the April 2013 issue, Garden Design Magazine will cease to exist as a magazine.

The publication was established in 1982 and written for those interested in garden and landscape design for the home.

I may not have the first-year copies of the magazine – I have to check my garden book and periodical library – (which is still in box storage until our home renovation is completed) but I’m sure I have copies of Garden Design magazine from those early years.

Whatever the magazine archive, I can say with certainty; I was smitten from the get-go.

The magazine spoke to me.  It was all about a garden lifestyle.
It was sophisticated. It was glamorous. It was transporting.
And there was never another magazine that came close to Garden Design.
Sure there were many horticultural magazines but all of them were focused on the hort community and the professional.
The hort “gotcha” community can be really tough on those that really don’t care to know the botanical nomenclature and all things plants.
Does that diminish the love of the garden?

To my knowledge, there is no other artistic genre that belittles its enthusiasts while professing to court them.
Well, maybe fine art painting- but not sure…

Garden Design magazine offered true romance about the art of the garden.   From the plants to the hardscape to the edibles and fine dining…

Garden Art is not dissimilar from other ephemeral art forms and Garden Design magazine celebrated the gardens’ provenance and exuberance and its designers—present and past.
Don’t get me started on the need to celebrate and understand Garden History.
How can one build on a body of art if there is no ready hub to stimulate and celebrate?
I contributed to the book, "The Pioneers of Landscape Design," because I had so much research material given my passion and my landscape design academic study that I wanted to share.

Every page told a garden story.
Even the ads were powerful testament to an elevated garden lifestyle.

Heck, I even read those teeny, tiny, personal-looking ads in the back of the magazine.
It’s how I learned about a week-long garden design course taught at Filoli in San Francisco, hosted by the English father and son garden design team, Robin Williams. (Not the American comedian).
I even flew my sister to join me and we stayed in Sonoma and then Half Moon Bay while taking the course.

Later, after I stepped out of the world of technology public relations and worked at The New York Botanical Garden and then Brooklyn Botanic Garden, I was giddy and privileged to not only work with the editors of Garden Design magazine on news stories but was able to count them as friends. To this day.

The business decision to cease publication can be justified.
It’s ad pages that aren’t there.
I tried a few times to post in landscape designer Susan Cohen’s postings (but due to tech issues could not…)
In response I tried to explain that one of the key inventory elements of garden design is plants – and outside of perhaps Monrovia, those growers and developers have zero history of advertising.
Why can’t the landscape designer’s hue and cry that Architectural Digest succeeds brilliantly see that without the limitless creative, design “stuff” support, the landscape sister to AD can’t cut it?

As noted by a previous Garden Design editor on Cohen’s Linked In page wrote:

A note about corporate publishing: circulation is controlled by the publishing company. Garden Design’s circulation was not reflective of national interest (or lack thereof) in exquisitely designed gardens. Circulation is decided upon based on formulas related to profitability (the printing and mailing of the magazines is the most expensive part of the business).

Just like the fact that not many of us can afford or want to pick up on the Vogue or Harpers’ fashion of the moment -- are we really going to purchase the Alexander McQueen or the Marc Jacobs or Oscar de la Renta?
Those of us who read and loved Garden Design magazine sensed we’d never have that rill or orchard.
But maybe some day we would.
Or maybe we could reinterpret it just like those fashion designs that are re-crafted at Target..

I also believe that the business model for Garden Design magazine was flawed,
Especially in a time of digital and social media.

Why couldn’t Bonnier, the parent company, create a hub for landscape, design professionals to come together and meet the homeowner – the garden design enthusiast?
Garden Design Magazine are the curators.
They are the experts.
They can create a compelling, viral, hub of garden art enthusiasts who will pay for the app.
There is downstream revenue to be explored for those that can marry the vision with the funding to make it happen. Seriously. With home gardening: edible and ornamental continuing to ahem, grow, there is an opportunity waiting to be cultivated…

Here’s to hoping Bonnier or someone with garden vision can make this work.
Maybe, just maybe – it could be us and our garden glamour community.
What do you think?

Here is the full Garden Design Magazine story as it appeared in Adweek: