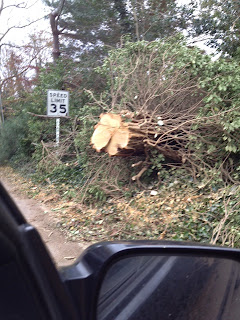 For all the world it seemed that Mother Nature couldn’t rein in or control her evil daughters: Sandy and Athena.
The two storm sisters unleashed fury, anger, and rage along much of the east coast; most pronounced in the New York/New Jersey and tri state area.

The twin’s powers of unbridled destruction hit the New York/Garden State area with inexplicable abandon: whole sea walls and yards distinguished by gaping, yawning maws in one spot, while right next door, relatively unscathed.
Sand from the sea was dumped like snowdrifts across the river onto the mainland.

And then, not to be outdone, Athena’s climate clobber dumped real snow -- at the same time it was raining.

The marina’s piers and boats were ripped from their berths and sent soaring like Dorothy’s Kansas homestead in the Wizard of Oz, only to land somewhere far, far over their Sandy-torn rainbow.

And I often wondered, where did the birds go during the storm?

Trees especially took it on the chin during Sandy and Athena’s violent temper tantrums. 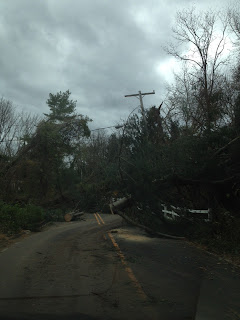 The destruction is breathtaking.

Hundred-year old trees – arbor royalty – have snapped like toothpicks, or their roots yanked from mother earth, exposing their lifeline and life-giving arteries -- like a baby torn from its mother’s arms – an humiliating indiscretion that the trees seem embarrassed that we should never see.  We look away in shame/ at this immodest and precarious situation.

It’s not just branches, but entire trees that hulk across roads, yards, and in far too many cases, homes – their jagged silhouette splintered and scarred.

In some cases, wholesale destruction could have been mitigated with proper tree care.  Far too often, pruning and care for trees is nil.
We allow the trees to go neglected, believing Mother Nature is “doing her thing;” not needing anything from us.

But we take too much for granted.  We need to work with our mother – help and nurture her in return.  After all, she gives us so much…

Keen observation and seasonal pruning is paramount.  We should look to our homestead tasks as a shared responsibility – not wholesale abandonment at its worst. Or pure neglect with the best of intentions.
I had one family member laughingly admit that the cost of tree care usually “takes a back seat to well, paying the insurance bill.”  The joke was on him, I point out, because now that insurance will have to pay for the tree clean up.
You will pay one way or the other.
As one now-vintage TV commercial used to declare “It’s not nice to fool Mother Nature.”  (Can’t remember what the product being advertised is…)

I have the privilege to work for one garden client who respects her trees – she lives in the midst of veritable enchanted forest glen.
It is a Grimm Fairy Tale of sorts, and she is surely its Queen.
She also heeds the wisdom to pursue an arbor maintenance plan.
Is it a coincidence that no tree came down nor harmed the house through Sandy, Athena and, lest we forget the third bad girl, last year’s Irene.

Towns and municipalities need to do their part and invest in more native trees, rather than fragile exotics.
Communities need to invest in regular, careful and informed maintenance.
I see too many utility companies practice a slash and hatchet job on trees “that get in the way” of their so-last-century wires and utility poles.
Those wires have got to go!

Why not invest in the future and infrastructure and bury those wires? They are now strewn like wayward necklaces around all manner of debris and detritus.  It looks like a bad rodeo rope trick writ large.

And then, in the name of all that is serendipity, I received two missives about this issue before I could even finish this post that I started mid week…

I am elated that I am not the only one coming up with can-do solutions to the power line issue.
Initially, when I broached the subject of burying the wires as part of an infrastructure need driven by the love of trees, first and foremost, there were those who scoffed.
No one will pay towns to take on such big cost.  Only rich towns might consider such a task I was told.

Maybe some good can come out of Sandy, Athena and Irene.
No matter if you come to this point of view from an energy or safety or aesthetic perspective, it’s all to the good.

I received one email from my New York Botanical Garden (www.NYBG.org) Landscape Garden Design Alumni Group.  The garden designers and horticulturists were discussing the need to mulch and finely chip the trees properly so that there is no risk of larvae and invasive insects in the mulch or firewood created as a result of the downed trees.
Accordingly, the NY State Department of Environmental Conservation and Council of Economic Entomology notes that nearly 50% of firewood sold in big box stores has insect infestation.  Which means if you are storing firewood or using mulch that is not properly or recycled into pallets you may be fostering yet another unwanted consequence.
The potential of infected trees being reused for mulch, firewood or pallets, just further exacerbates or extends the horror of the storm’s damage and further points to the need for tree care – on so many levels.

It was not so long ago that most every town and municipality employed an arborist to help promote the health of the trees – and in no small way, that of it’s citizens.
Now, it seems, starving the city’s coffers for the benefit of the few became the modus operandi.
Here’s to hoping we can return to a time of quality of living and investment in the future.

Now, if one can afford it, there are arborist who will consult and maintain a homeowner’s private property and a municipality’s associated with trees and structural issues. – what the risks are, whether they can be mitigated, and how badly the trees need to come down.  They consider issues of location and what direction the tree is likely to fall.

Check your local listings for a certified arborist near you.

The other email notice I received was from MoveOn.org who created a petition to bury power lines for a more secure grid.

In part, the email reads:
Noting that Hurricane Sandy hit the tri-state area hard, and left millions of Americans without power for several days, Power outages do not only create personal hardship for the people in the affected areas; as Hurricane Sandy demonstrated, these power outages claim lives, negatively affect our economy, and impact national security.
The German power grid has outages at an average of 21 minutes per year. Why? Because most of their lines are buried underground.
Because most power lines are strung through the air, they are vulnerable to ice, trees, and lightening. Power companies around the country keep putting up lines and repairing damages after each storm, only to repeat the procedure after the next storm.

Further, they urge citizens to contact Congress to create and act to facilitate burying power lines in cities and towns across the country. It will improve people lives, boost the economy, and make us less vulnerable.

Here is their link:
http://tinyurl.com/be9xvok

Enjoy and revere our trees 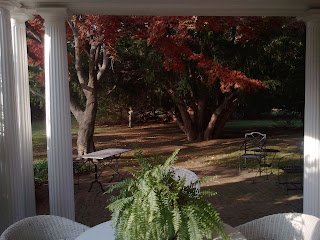