The Glamour of Planet Pandora in the Movie, Avatar

“I See You” is the Spirit of Avatar, the movie.

You must. Avatar is the top-grossing movie for a whole lot of reasons.

Moviegoers are thrilled by the action, the special effects graphics, or for the love story:  classic and movie-sweet.  (boy, er avatar meets girl, er princess…)

Much has been said about the incredible, groundbreaking 3-D technology.  Wowsy.  I have to admit I did love that – first time I ever saw a “film” in 3-D.  It is an incredible, sensual experience in that you really feel like you are IN the scene – a part of the story.

Birds and insects and otherworldly creatures seemingly whiz past you or jump out of the forest or flit, flit and float. Like the mountains!

Because you’d literally have to have had the most serious New Year’s Eve hangover to not to know the story of Avatar, I won’t go into any explanation except to say I’ve read that it is a bit like “Dances With Wolves” - and I can agree with that.

Bottom line is that Avatar tells a compelling story.

The moviemaking is the magic that makes this like no other movie adventure.

Truth be told, we’ve seen the movie twice in two weeks… I couldn’t wait and so caught a first viewing in the Garden State and that cinema didn’t have 3-D capability L

But on the positive side, seeing it straight-up the first time allowed us to focus on the story itself.  And it is still very much a beautiful movie – even without the 3-D technology.

But!  Seeing it again in the eye-popping 3-D is epic.

Plus you get these cool-looking ray ban-styled glasses! 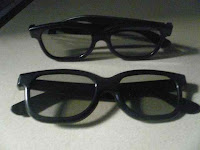 Not since Wall-E have I witnessed a movie that dealt with the world of plants in such a charming and reverential way.

And make no mistake; Avatar the movie celebrates the World of Plants and Nature. I’d argue it goes straight to Pantheism.  This is how it should be…

That is what intoxicated me and why I recommend seeing Avatar.

I was mesmerized by the lush, magical, mystical world of plants and botanical marvels – as well as fantastical animals and birds that inhabit the planet Pandora where the native Nav’vi live.  The plants glow and glitter and dance... 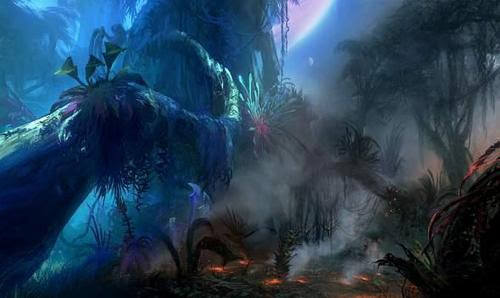 I wanted those scenes to linger, to last longer. I want to live in that world… It is a fantasy come to life… 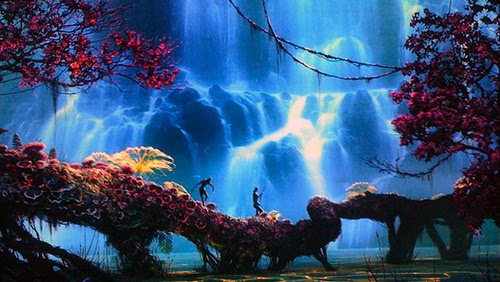 The Nav’vi’s possess a true reverence and spirituality in the film that is both personal and part of their shared culture.  It’s not just environmentalism or ecology that is on display, (Not that there’s anything wrong with that.)  But the Nav’vi ethos impressed me as a tender love and respect.  How Princess Neytiri emotes when teaching Jake the Nav'vi traditions captures the sense of harmony they have with nature. They worship their sacred trees and plants.  This is how it should be.

In describing the head botanist and creator of the avatars, Grace Augustine – (how loaded with meaning is that name?), her assistant says, “She loves plants and botany more than people.”

I’ll leave the discussion of the movie’s supposed religious and political overtones to the countless blogs, tweets and discussion groups.  The technology and movie’s story line are high-octane fodder for postings about discovering and interpreting the hidden and true meanings of the action and dialogue and well, then there are the just plain-vanilla kooks…

Rather, I want to spotlight the sheer magical, transporting world of the planet Pandora – and the world of plants…

I couldn’t help but think this is the way I dream of our world of plants.  The movie made my magical world a visual reality.

To the Nav’vi, Hometree, is the sacred tree.  It looks like a really, really huge banyan – and it’s said to embody their life force. 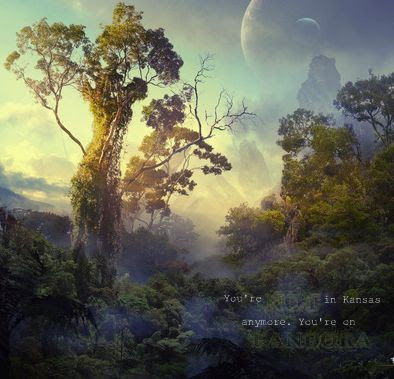 Hometree is so incredibly beautiful – I thought of it as the best tree house; lit from within and glowing… and the Nav’vi sleep in hammock-like beds suspended from the Hometree’s branches.

The Floating mountains are ethereal.  And seemed startlingly “normal.”

James Cameron and his writers have incredible imaginations to dream up such captivating images that draw us in and make a place beguiling yet familiar.

Throughout the movie, there are references to the trees on Pandora: their vast root systems, their connectedness to other trees and Mother Nature.

The Nav’vi from planet Pandora worship tree Goddess Eywa  - she keeps balance in their nature & their lives – she encompasses a collective energy of Pandora’s living things.

Goddess Eywa’s seeds are called “pure spirits.”  They are a wonder.  And appear as floating, dancing jellyfish (in a good way).  Think of maple seeds swirling to the ground with that amoeba-like helicopter whirly top and feathery, lace-like anchor – think of a teeny-tiny, poetic parasol…

The Tree of Souls profiles luminous tendrils or branches that resemble dangle earring jewelry.  The tree is the link with Nav’vi’s ancestors and they can communicate with them through their Mother – Mother Nature.

The movie superbly portrays Jake Sulley – the movie’s protagonist, utterly transfixed by a forest’s plant population. I say it’s an epiphany that allows the story to move forward.    Here, the Helicoradian plants that look like layered nautilus shells sort of (one has to hedge with everything when describing anything in the movie as it is so unique as to defy most references).

Jake can’t seem to take his eyes off these incredible plant creations.  Upon his first experience in the forest on Pandora he touches one and POUF! It drops away from sight. 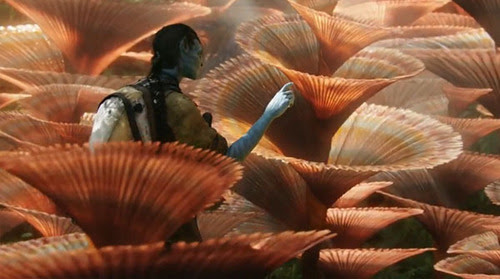 You viscerally experience his sense of wonder.  And because his curiosity gets the best of him (which is exactly what the plant world does for most of us) Jake doesn’t walk away. He does what any of us would do – he touches another one.  POUF! And then another one and then another. Pouf, pouf, pouf.  They all retract.  Gone.  You can see the sense of gleeful wonder through his expression. Who among us has not experienced the same spellbinding excitement when seeing what Mother Nature and plants are capable of – in addition to their hypnotic beauty?

In another notation as part her teaching Jake the ways of the Nav’vi, Princess Neytiri tells him that everything is born twice - that energy is only borrowed and you have to give it back.  How lovely.   For us as humans to help not only deal with death, especially of a loved one …

But also in a more simple, banal way:  Compost ^:^

When the Nav’vi, led by Jake, prepare to defend their land from the Sky People – who are the corporate Earth people, Jake prays to Mother Nature telling her that the earth people killed their mother – there is no more green there…

Princess Neytiri tells Jake that Eywa does not take sides; she only protects the balance of life

But she does in the end.

Nature comes to the rescue.

We know Plants produce oxygen – life-giving air.  It’s fitting then that the Sky People/corporate humans can’t breathe on Pandora without the benefit of an oxygen mask.  I had to wonder – because they killed all their trees and green, did they forget how to breathe? A loss of capacity?  Or were they being punished in a way?  They couldn’t enjoy the beauty of Pandora’s forest without a mask to separate them from the true spirits of the plants and trees that connect us to nature.

Here’s to a harmonious relationship with the environment.

In the spirit of the film’s “I see you” insight, I hope people see nature in a better, more sustainable and loving, respectful way – as part of our earth community.

Posted by Garden Glamour at 3:17 PM