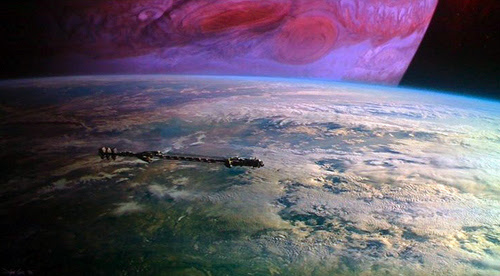 I am still over the moon :) about the movie Avatar, mainly for the visual magic found on the Pandora -- especially the amazing, dream-like world of the Native Plants found on the planet.

Now I learn there are web sites that offer botanical listings of the Flora on Pandora.

It is Fantasy Botany!


Just like Jake, it's easy to see how fans are having difficulty separating the real from the world of avatar and Pandora...
The New York Times reported on fans that can't seem to shake the blues ^:^ after seeing the movie:
http://tinyurl.com/ycauzhu


Here, for example is the data for Octoshrooms:

Biology: Octoshrooms ( style="font-family: Times-Roman;">Na'vi name: Torukspxam, meaning "great leonopteryxfungus") are large mushroom-like organisms that live on Pandora. They are bioluminescent and extremely toxic. These fungi possess a giant underground filament network that enable them to feed.

Reproduction:  To reproduce, octoshrooms release spores that germinate and grow filaments wherever they land.

Feeding: Some mycelia penetrate plant roots to absorb carbohydrates while providing the body with a greater supply of mineral nutrients. Octoshrooms are able to absorb and break down nearly everything in the soil such as chlorine, ammonia, and methane

Study: Following the 1986 Chernobyl incident on Earth, a similar fungus was discovered, but not fully understood. When scientists realized that the octoshroom used ionizing radiation as energy for growth, scientists were able to further understand the metabolism of the Chernobyl fungus. Because it is an effective antivenom, there are currently studies underway regarding the octoshroom in the pharmaceutical and bioremediation industries.

Uses: The Na'vi use the octoshroom's roots to make tea. It is a powerful antivenom effective against the sting of many venomous animals. Too much tea, however, has been proven toxic and sometimes lethal

On Earth: It is possible that octoshroom spores have stowed away on an interstellar vehicle and germinated on Earth. However, no specimens have been found and data regarding its survival in the terran atmosphere is incomplete. Some believe that an octoshroom "forest" in Nevada could help restore the entire region

I love all the fervor surrounding Avatar and can only hope it gets people more interested and active in learning about plants and taking care of planet earth...and OUR native plants -- they are just as heart-stoppingly beautiful, mysterious and magical – if you just take the time to look and explore….

Posted by Garden Glamour at 4:46 PM