It is with great reverence that I approach Asian gardens. See, before I studied landscape design (and earned my certificate from The New York Botanical Garden - NYBG), my Western aesthetic hadn’t prepared me for the artful meaning and beauty to be discovered in Asian garden design. Even my many trips to Japan hadn’t opened my eyes - probably because my heart wasn’t yet ready to embrace this ancient art form.


As part of business trips, I visited many gardens in Japan and most certainly was awestruck by their incredible detail - later I would learn that Asian gardens combine the basic elements of Nature: water, rocks, and of course, plants. I was readily impressed by the gardens - and daresay, humbled by their ability to create an intense aura of mystery. I loved the winding paths (it’s said evil spirits travel in straight lines so one can thwart the spirits with curved paths.).


I also was intrigued by the romance of the quiet fountains, the ponds with their golden fish and moss-covered shores and tree groves that whispered with pine needles underfoot and just the birds to sing hymns to the gods. But I was also confounded by the “karesansui” or “dry landscape garden” raked to super Type A perfection in their Sand and Stone Garden. 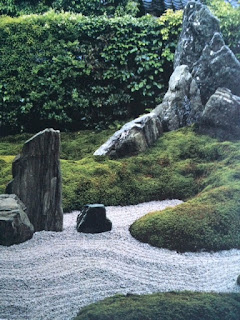 In my naivete, I wondered, “Why not green or grass there?” I was enchanted when I was told that legend had it that Japanese sailors who went to sea to explore and never returned were thought to have found heaven, never to return. These sand gardens were said to recreate the boats and islands - using the rocks and moss and the sand as sea, in order to bring the gods - and their heaven into the garden. 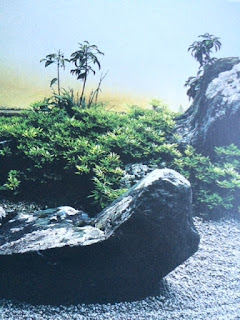 The boat-shaped stone on the "water"

I have since come to understand the enduring beauty of Asian gardens and further, to not only take to my heart the teachings and fundamentals of this particular garden design and to incorporate some elements of its ancient discipline into my own and client's’ garden designs, including Feng Shui - (“wind and water are associated with health”) and Zen landscapes but to recognize that I’ll always be a student of this eternal, timeless art form.

I am fortunate to be able to attend the many landscape design garden lectures produced by both NYBG and Wave Hill, in particular. Just over the past few years, lessons learned I’ve learned from some of the masters would inspire a lifetime of learning...

Shunmyo Masuno who I covered here in Landscape Design NYBG Lecture Review of Japan's leading Garden Designer and Zen priest: Shunmyo. It was written that “Shunmyo is at once Japan's most-acclaimed landscape architect and the head priest of Kenkoh-ji, his Buddhist Temple in Yokohama. Renowned for his ability to blend striking contemporary elements with the traditional design vernacular, he has established gardens around the world in a wide variety of settings: traditional and contemporary, urban and rural, public and private, and include temple, office, hotel, and campus venues. HIs design work in inseparable from his Buddhist practice. Whether in his celebrated traditional gardens"Vancouver's Nitobe Memorial and the Yuusien in Berlin"or his striking karesansui (dry-landscape gardens) "the Canadian Embassy in Tokyo"each project becomes a Zen garden, "a special spiritual place where the mind dwells.’ “

I also learned much from the Chinese landscape star, Kongjian Yu, who I covered here: NYBG Landscape Design Lecture featured Chinese Star - who spoke about “Green Infrastructure,” and urban gardens. Some background written about Yu, “He is founder and dean of the College of Architecture and Landscape Architecture at Peking University and founder and president of Turenscape, one of the first and largest private architecture and landscape architecture firms in China. His practice includes projects in major cities in the United States and around the world, and his numerous awards include this year’s prestigious ASLA Excellence Award for his work at Qunli Stormwater Park. His guiding design principles are appreciation of the ordinary and a deep embrace of the power of nature. (My emphasis.)

Personal Asian Garden journeys
Perhaps because tomorrow is Valentine’s Day - but really because I lean into the romance of all gardens - including Asian gardens, so I’ll share with you just a few of the gorgeous, hypnotic gardens I’ve had the good fortune/lucky chance to visit in China and Japan. In China, my niece Marissa, who was teaching English to Chinese students in Shanghai, made arrangements for us to visit the UNESCO: World Heritage Lingering Garden, located within the famed garden district, Suzhou, often referred to as the “Venice of China.” The Lingering Garden has long been acclaimed as an “earthly Paradise,” and so begins a Tang Yin poem. 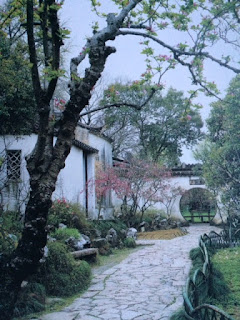 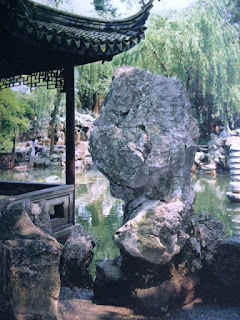 -- water, vegetation -- known especially for its paeonia suffruticosa - and buildings was an extraordinary, decorative garden art. In fact, the Lingering Garden is noted as one of the four most famous gardens in China that was originally a private garden and once hosted the wealthy “pleasure-seekers” and gentlemen of leisure.” A key element of Asian garden style is creating vignettes that can't be viewed all at once. The winding paths and axis points beckon you to continue the discovery. 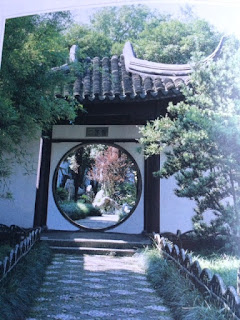 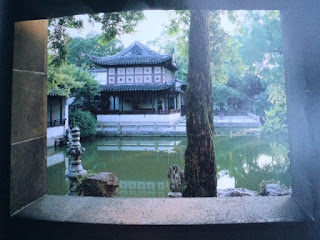 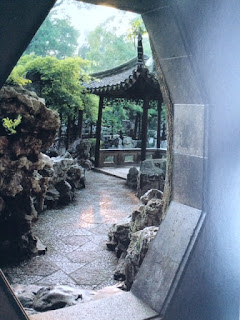 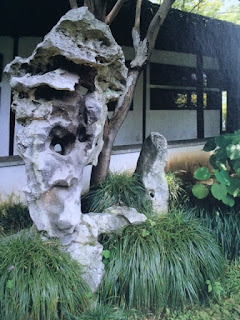 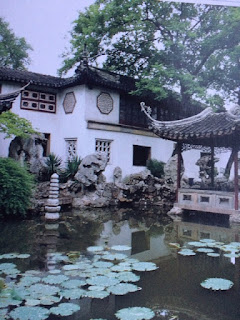 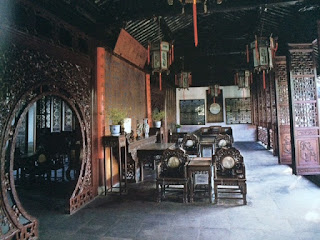 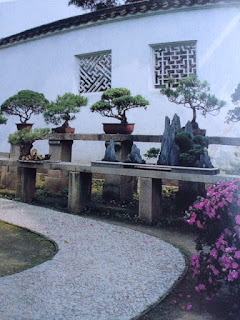 So many of the gardens featured bonsai & container compositions

Many of the gardens I visited in Japan were the ones that were designed for devotional or ritual experiences, mainly in and around Kyoto -- which is where I think most Westerners think of their imagery of ancient, spiritual Japan. Tao tradition has it that to stroll in a garden is to enter a sacred world; “to follow the example of the immortals, who by walking in nature, sought to become one with eternity.” Amen to that. Couldn’t agree more. 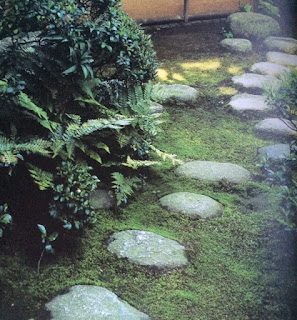 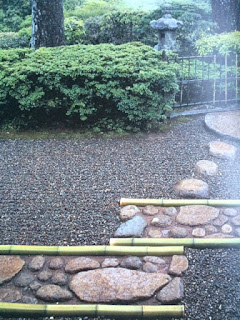 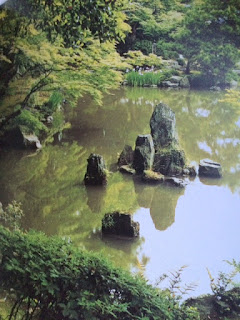 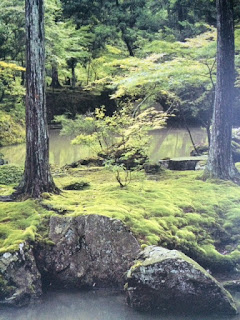 In terms of decor, Asian style became so popular, the French term Chinoiserie Style (or in the Chinese taste”) that came to be a prominent decorative art style that imitated Asian style in design. I do love the lacquer and blue and white porcelain look that is characteristic of chinoiserie and use it quite a bit in my home design. I think it’s a timeless look that not unlike a true cosmopolitan, fits right in with most everything, everywhere.


This year, I hosted a luncheon with double celebrations - combining Lunar New Year Celebrate Lunar New Year's Fire Monkey with Valentine’s Day. I hope you’ll agree the lucky colors worked the stunning tablescape, especially the vibrant, fiery red. The jade monkey that I grabbed off our bedroom book shelf did the ultimate honor. It was an artful comeback for this simian. See, shopping in China on that 2005 visit, I really only wanted a few quality things - mainly art. (and some pearls - green water ones for me and a some for my mother, along with a silkscreen of ladies playing golf - a sport which the Chinese claim they invented. This is a funny story in itself, but I digress.) I asked the art vendor for a statue/sculpture of my zodiac or year -- and he ran to get me a monkey. It was solid, well-crafted - and soon it was mine. It was only after I got back home that I came to learn, I am not a monkey! So while I never quite felt the connection to my little simian, this is his year to shine.  And he made the tablescape just sparkle.


My menu was equally inspired by Asian and Valentine's Day influences. Of course, several of the recipes were selected from my book, "The Hamptons & Long Island Homegrown Cookbook" -- two of them specifically are from Chef James Tchinnis, Swallow Restaurant.

The Year of the Monkey logo was created by a dear friend and talented artist: Bek Millhouse. Adorable isn't it? 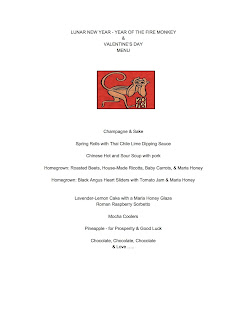 If you want recipes or want to "read" the full menu, just email me!


Even the food color-coordinated with the dinnerware. Beautiful. 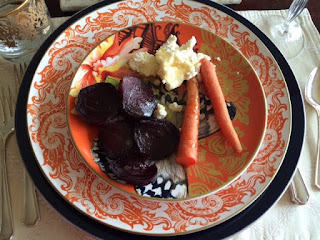 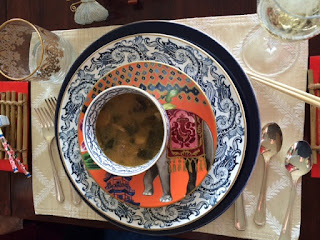 Here’s to a lucky, art-filled Year of the Monkey.
Posted by Garden Glamour at 6:02 PM