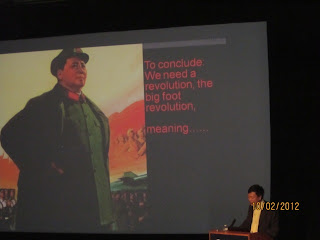 The venue was new this year: The Asia Society.  This is a much better locale: good theater seats, convenient to get to and good viewing from every spot -- unlike past rooms where often far too hot with overcrowding, chairs that went bump and not enough seating for the SRO crowd.

NYBG’s Landscape Design Coordinator, Susan Cohen, an award-winning Connecticut landscape architect and lauded for her work producing the Landscape Design Portfolio series, told me after the lecture that the series has always had an international theme.  I hadn’t noticed till now.  Susan said this lecture was two years in the making. Just that day, she and Yu flew back to New York from the ASLA conference held in Phoenix.

This year there is a Chinese, Japanese and Canadian are the award-winning designers who will present their work, focusing on “sustainable design and aesthetic innovation.”

So Yu clearly has the street cred.  Literally.
Yu demonstrated how he took what he described as “dirty” areas and “through landscape architecture, made it beautiful.”

Yu is made for lectures and presentations: he possesses a tall, commanding presence and a compelling passion for his art, dusted with an endearing sense of humor.
More than a few times, he characterized his designs as “Messy” because he uses lots of ornamental grasses, a la the Midwest prairie grasses or Piet Oldief.
By the end of the lecture, Yu had the audience, laughing along with him, each time he chanted the “Messy” attribute.  Yu seemed delighted with the charm of Messy, saying Conde Nast Magazine on 2008 described one of his design creations as one of the Seven Wonders of the World. And Messy! 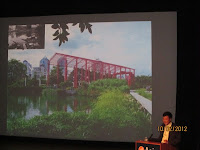 He had the audience loving his work and his design stories.

While there was no mention of how Yu secures his public commissions – in a country that spends 9% of GDP on infrastructure, drinking even a few drops from this spigot can be lucrative and ….

Through images and remarks, Yu described how he and his firm could take a blighted, dirty area, and within a few months, transform the spot into an urban park, enjoyed by its citizens. And in China, that means A LOT of people. Yu cited that more than 200,000 in just the first month! 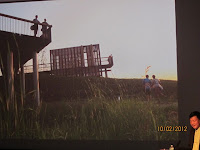 There seems to be a certain theme and style in Yu’s designs:
·      They follow the contours of the landscape,
·      Refrain from cutting trees,
·      Cut and fill landscape
·      Skywalks and boardwalks,
·      Use of low maintenance plants, and a sense of child-like wonder and joy, bound with a grown-up embrace of the romance. 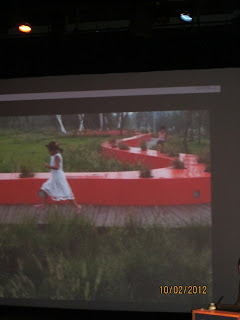 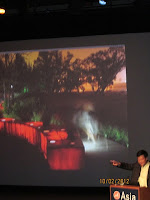 He showed his gardens with kids jumping on walls, people taking a nap in the park, and a couple stealing a kiss on a starlight night.
“You don’t have to change everything,” Yu said, “Just what is needed.”
Just help nature do its work.” He added, “Simple” to emphasize the Zen of his work.

Hardly.
But the parks do look like they’ve always been there, courtesy of Mother Nature.

A hallmark of Yu’s design and one that makes him a pioneer is his ability to use rainwater.
Not only
Uses diff pH values to introduce a variety of flora and fauna species.

Moreover, landscape design can artfully create urban solutions to flooding and drought.
He recounted how in 1977 so many citizens had died in urban floods.  “It was on CNN,” he noted.  “People were dead in the streets!”

China recognized it needed a “Green Infrastructure.”
“The landscape can be used as a ‘sponge’ to transform the park through use of walls and plants and a series of interconnected and spiderlike skywalks above.” 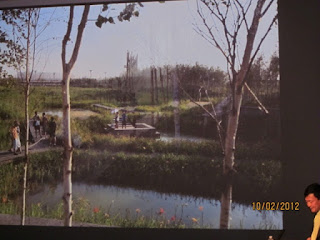 Using a “cut and fill” technique, he creates boardwalk networks and then “just” plants the periphery, using the water as a filtration system.  The parks can then generate clean water that is enjoyed by the people. The ponds are filtering the water and introduce new ecosystems. And at very little cost, according to Yu.

“It is a city AND nature,” Yu points out.  “Like Central Park, but low maintenance,” he adds.
This is surely a model for the other cities.

Yu explains that 75% of their water system was polluted. And they simply couldn’t afford to fix it.
But landscape concepts and engineered design can play a huge role in remedying the problem./issue.

“I learned from the farmer,” Yu explains while showing images of crops and botanical gardens that are nutrient-rich in a planned landscape.
“We can use different nutrients to get the oxygen into the water and create a cascade wall of aerated water, for example.”  We can create a 300 meter aqueduct wall to generate 2,400 tons of water so that 5,000 people can use the water – even to shower using clean water.”
I daresay the thought bubbles of the audience were trying to visualize New Yorkers bathing in a park’s waterfall…

In any event, he has created an eco-friendly waterfront.
“Seventeen new species of fauna have come to the waterfront in just one year,” Yu cheerfully and proudly claims.
He also claims they are just helping nature do her thing.
They capture rainwater and storm water --design the parks and gardens  -- and in one to two years, they have transformed the urban space to one of utility and beauty; at low cost.

Yu went on to describe a landscape in Guizhou in the Yunan province where by following an ecological strategy using wetlands to purify the water and his sky bridges, he created a green infrastructure, saving the government billions. 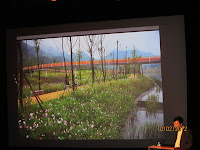 Having been to the gardens in Shanghai, Suzhou and Beijing, and having witnessed this incredible patchwork of storm drain deserts; Yu’s solutions seem sylvan and doable.
Further, I hope his urban works preserve many of China’s heritage neighborhoods.  We stayed in the fascinating, charming hutongs, and I hope the ancient ways of water and land use remain so.  Too many of them have been ripped up for the people or the Olympics…

One Can Make A Difference

Finally, he showed his own apartment as a template for sustainable, green infrastructure. 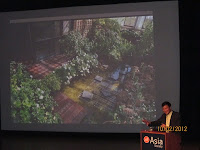 In a country where scale is sometimes unfathomable and dense, it was easy to recognize  the progress to see how just one family can make a difference and achieve success.

Yu described how his family collects storm water and produces 60 pounds of vegetables using the collected water.
“We have been living well, testing the systems for three years,” said Yu.  “Using nature, we didn’t even need air conditioning,” he added, noting how humid and hot it is in Beijing. 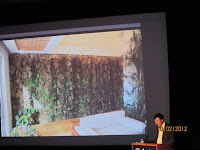 His apartment is a learning center of sorts.

His spatial strategy provides free service and can solve almost all the big problems
“Small solutions to big problems,” he repeated with conviction throughout the talk.

“We need a new aesthetic,” commanded.
“Performance Landscape” that is today!

He concluded how it might be possible to repurpose buildings.
He showed several iconic Chinese architecture in new ways, drawing laughs and encouragement. For example, the Birds Nest, designed for the Olympics, can become a farmer’s market! 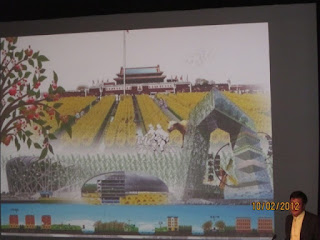 Tiananmen Square can be a farm, he implored! Make it beautiful not useless.

Following Yu’s talk, Gregory Long, NYBG president praised Yu as a good leader.  Long thanked the guests, encouraging the audience to get his book that was just shipped.  “Only NYBG has the book,” he added, no doubt spurring the frenzied book buy after the lecture. 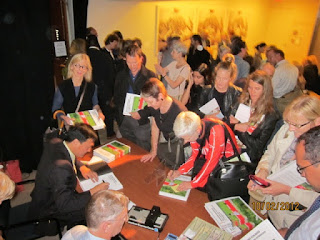 Posted by Garden Glamour at 6:21 PM