He likes Plants He Can Play With

Metro Hort First Meeting of the New Year Featured Plantsman, Michael Ruggiero
Plants and Gardens from the Sublime to the Lubricious

Metro Hort, “An association of Horticultural Professionals in the New York City and Tri-State Region” held its first general meeting of 2011 at the Arsenal, which is perched on the cusp of Central Park at 64th St. Every time I approach the fanciful building nestled among the trees, the architecture conjures a fairy-tale where I half expect fairies and dragons to be peeking from a window.
This time of year it is glowing with holiday lights animating the sense that a Merlin will be swooshing to greet you.
A 2007 New York Times article described the holiday lighting:
Beginning in 2005, the department began an unusual program of holiday lighting, designed by James Conti. Instead of the usual horizontal strings, Mr. Conti draped the building in roof-to-ground strands of closely spaced lights, generally blue and purple. Viewed through the screen of trees, it is a moody, evocative sight, like the bass line of a slow jazz tune.
Very sexy, no?
I researched the history of the Arsenal and found it not only housed 19th Century ammunition, but at one time it was the American Museum of Natural History and a zoo.  Now it is the headquarters for New York City’s Parks and Recreation Department.
Holding the door open for me as I made my way up the steep stairs was not a Merlin or a gremlin, but a courteous Parks staffer.
Upstairs it was all horticulture humming as the audience was settling down. Greetings were underway by Metro Hort Secretary, Charles Yurgalevitch, who introduced the speaker, Mike Ruggiero.  Charles is also Director, School of Professional Horticulture, NYBG. 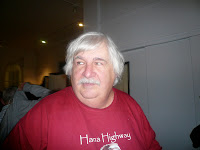 Mike is a stuffed-animal, cuddly walrus of a garden giant and an excellent horticulturist.
He was one of my instructors at NYBG when I took classes for my Landscape Design certificate.
The Metro Hort bio for Mike formally notes:
In his inimitable and engaging manner, Mike shares stories and comments about the many wonderful, unusual, or just plain strange plants and gardens he's come across over the course of the past fifty years in horticulture.   Michael A. Ruggiero has had a stellar career in horticulture, most recently as horticulturist and all-around plant and garden expert at Matterhorn Nursery in Spring Valley, New York. He came to Matterhorn after nearly forty years as Senior Curator for Horticulture at The New York Botanical Garden where he was responsible for the Peggy Rockefeller Rose Garden and many of the other collections. A renowned expert in roses and all perennials, Mike continues to teach and lecture on a variety of horticulture topics. He also serves as an instructor at New York Botanical Garden's School of Horticulture.
Like a kid hitting the roll of toy gun caps, Mike presented a rapid-fire series of garden photos while sharing funny stories about the garden and plants. Gardeners like nothing better than to look at garden images… Truth be told, it’s almost as good as working in the garden. And this time of year?  Nothing is better. We could see all those stacked slide carousels and were as giddy as kids hearing it’s a snow day!
Mike says he likes plants he can play with and his mirthful, down to earth (can’t resist the pun) demeanor underscores his commitment.
There is the cedrus pendula he used at NYBG to keep the kids off the rocks.
The Himalayan Pine that looks like zebra grass. I have used these Suessical-like conifers in my clients’ gardens and we love them too. 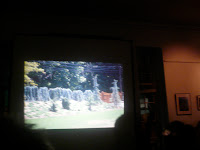 There is the blue spruce used as a hanging fence wall.
A guy who painted his glorious coral bark tree a sharper shade of red – and another one purple!
Here is a Leaning Tower of Taxus he saw in the Pacific Northwest: 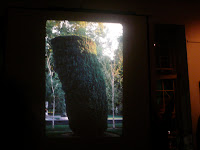 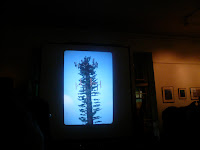 He had everyone laughing too hard with his whimsically “favorite:” the “communicatos verizonis”  (It's a cellular telephone pole!)
Not all was goofy, though. He pointed out that Japanese Maples do best in rock gardens and shade – but notes that many people do put them in sun.   They will do well there but are best in low light.
He loves cornus Kousa and had one that flowered in the Peggy Rockefeller Rose Garden right through August. 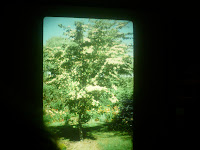 He joked that there were two questions he was invariably asked when he was the curator there:  “Where is the restroom, “ and “WHAT is that flowering tree??”  (Never mind there were in one of the world’s premiere rose gardens!)
He’s not sure about glass in the garden. He swears this Chihuly glass creation is following him! 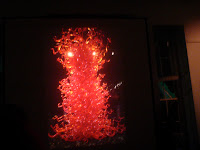 He made us all laugh with the garden "bed." 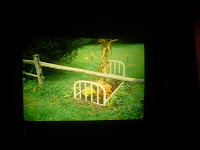 I got a gift not too long ago that was a framed card that reads, "Gardeners get to stay in their beds all day."  Cute. It has a nice spot in my garden room.
The Good Gardens segment started with his all-time favorite:  Lynden Miller’s. 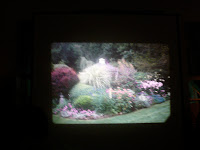 He showed a number of seasonal photos of the perennial bed.
And why not?  It's heart-stoppingly beautiful.  "I love that bed," he sighed as he reluctantly changed the slide.
He also remarked he loves her Perennial Gardens and design at NYBG.  Naturally.  Who doesn't it?
He also loves Sissinghurst.  He showed a unique perspective – from on top of the roof. From this perch one can see and appreciate all the different garden “rooms.” Mike noted that just walking from garden room to garden room, you can’t a real sense of the design.  Good point. 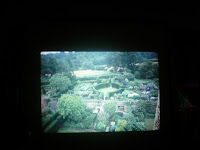 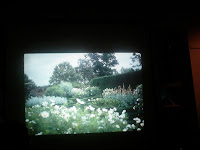 In turn, the White Garden at Sissinghurst was his inspiration for a Macy’s Flower Show design.
Crayola-like primary colors had been the norm for the retail legend but with Matterhorn Nurseries, Mike does the garden work for the annual flower show, and together convinced Macys to try white.  Here is their white unicorn in a white garden display. 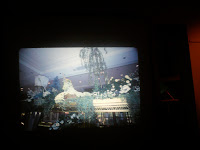 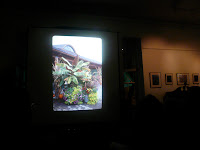 He also likes tropicals.  For these tender perennials and true annuals, he recommends lots of fertilizer.  “Feed them like crazy,” he said.  He starts with Flowertone in May, then Osmocote (14-14-14) in June when that begins to work. Overall, he feeds the plants every two weeks.   He likes the beds and window boxes to look like they are on steroids! 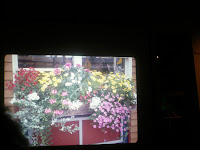 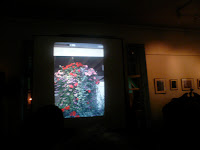 He likes topiaries and standards too, and showed a number of plants including New Guinea Impatiens 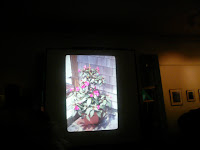 He notes New Guinea impatiens was developed by Longwood Gardens!
How could we ever have thought the plant was from the country of New Guinea.  Silly. 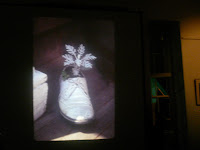 He loves unique planting vehicles: golf shoes seemed to star and he showed a few
It was an amusing and fun night to learn about plants.
Here is Mike with garden artist Lynn Torgerson.  Xx She is adorable – well so are you , Mike, but in a different way…  J 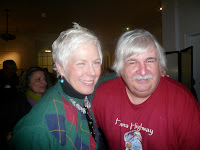 Lynn told me she is working on a new rooftop garden design. I can’t wait to write about it.  Last year, I wrote about her sexy garden on top of Gramercy Hotel.
Next Metro Hort meeting, February 16th, will feature Stephen Morrell who will talk about Zen and the Japanese Garden Aesthetic.  He is the expert.  He is the director of the John P. Humes Japanese Stroll Garden in Mill Neck, New York.  It is a jewel of a garden.
For a complete listing of Metro Hort meetings:
http://metrohort.org/?/meetings/

Posted by Garden Glamour at 5:38 PM