SOS For The Garden: Save Our Shrubs (From The Snow)

What Panty Hose Can Do To Keep Your Evergreens Shapely – And Glamorous!
Those of us hit with the craziest snowstorm in memory have shoveled out the driveways and walkways by now.  But what about the plants?  Particularly the shrubs and conifers that have been whipped by the winds.  In some of my “garden rooms” the wind acted more like cotton candy – spinning floss round and round and mounding snow piles in opposite corners like prize fighters facing off across the ring.
In almost all circumstances, the snow will act like a warm blanket for the plants.
Leave the snow in the garden. It is a good thing.
If the heavy snow looks like it damaged conifers or shrubs you may need to take action.
I needed to get the snow off the lower limbs of a row of arborvitae before it cracked the limbs. 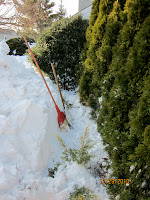 I also have a very large Steeds Japanese Holly, Ilex crenata, that came with the house so it must be at least 30 some years old.  Truth be told, it took a header last year with the sustained sequence of heavy snowstorms.  We knocked the snow off at that time, and hog-tied it up and it was just lovely throughout the summer.
I thought it was on the road to recovery.
This past storm it suffered yet again.
I had my eye on it but must have looked away. Or maybe it happened during the night…
Essentially, the snow acts like a bomblet, cratering through the middle of the shrub, causing the Steed’s branches to open up like a British gentleman’s umbrella.
I had to try and nurse this good soldier back to health. 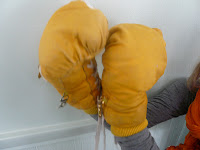 With a broom and a shovel and my hands as weapons
I went to war on the snow.


Intuitively, I shoveled out the inside bomblets of snow from Steed. 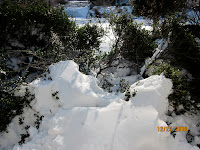 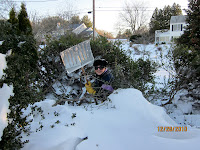 A lot of that shoveling was more like a Medieval Crusader tossing molten lead over the “Murder Holes” or parapets of the castle turrets...
And a Murder it was. Murder by Snow
By hand, I shook off and pried off the snow that was packed into, onto and in between the branches, to prompt the snow to fall into the void I had created by shoveling out the bomblet snow.
I had mentally divided the Steed into quadrants, working through two the first day.
It is very tedious work and the snow is heavy.
I just kept repeating the shaking and prying.
It was kinda' of a help – if you can even think of the snow as any kind of help here – but I am small and can almost “stand” on the snow berms so that I was even-steven with this seven-foot Steed -- allowing me to reach the top…
Ho, Ho Hoe!
I also used a hoe a lot like a shovel, scooping the snow off the branches all the while trying not to cut or strafe the limbs.
All too often, the Steed – and the nearby shrubs – seemed to be reaching out and quite literally clinging to me!  I could hear their cries of Help!! Help me!  I tenderly pried their needy stems from my pockets or zippers and reassured them I’d be there for them….
I got two quadrants up today, propped by the shovel and a mop… I should have been out there all day… 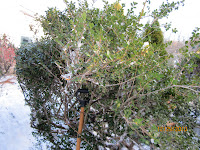 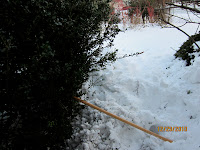 It’s great that it’s warmer. But the down side is ice forming on the top of the snow, making it all the more difficult to lift the snow and the branches.
I could barely see over the snow berm to the promised land, er, snow-free zone just on the other side, not five feet away.  I did say that is was a crazy snowstorm, right?! The cotton candy whirls of wind whipped some areas lawn-dry while others were waist-high! 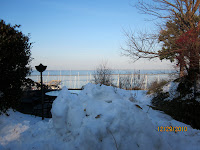 Gottta get all the white stuff off tomorrow. 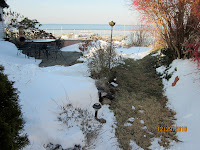 I know I’m not the only one who may be working Plant Rescue this year so I did some research and asked the experts.
Besides my own hands-on advice and a few tips, below are the results of my research.
There are two categories of Care:  Prevention and Repair. Hope this counsel helps you.
I suggest that you prepare for winter before the weather prevents you from doing hands-on help.
We all mulch, prune, and spray an anti desiccant on the shrubs, conifers, and trees.
You may also need to do a survey and determine if some of the conifers and shrubs could use a screen – made out of burlap, for example.  Some can be wrapped. Or you may need to tie the branches together.
If the damage has been done, take pictures for documentation. Follow my repair recipe and/or follow my advice:
1.  You should also call a certified arborist tree expert for help.
I asked my local certified tree expert, Michael Hufnagel, Hufnagel Tree Repair, for advice www.hufnageltree.com
Michael has worked on my yard and the slope down to the marina where it’s important to remove just the invasive plants and trees and preserve the good ones. He did such a good job, I asked him to work for my clients. I trust him and his generational experience.
According to Michael, president of Hufnagel Tree Repair, and ISA Certified Arborist, there are three key tips for Prevention and Repair of shrubs and trees when it comes to snow exposure:
More Tips:
I Googled Web Research for what to do about snow damaged shrubs.  Most of the advice is Preventive – which was not what I needed, but I want to share because it is solid counsel.
1. Caring for Winter Damaged Shrubs and Trees by John Schach, ISA Certified Arborist, Good’s Tree Care Inc.
http://tiny.cc/4uqrz
2.  How to Protect Shrubs from Heavy Snow from Garden Guides.com
http://www.gardenguides.com/102630-protect-shrubs-heavy-snow.html
3.  How to Care for Snow Damaged Shrubs by Helen Yemm, The Telegraph
http://tiny.cc/n961f
4.  Snow and the Garden: Will it Damage Plants and Shrubs? By Joanne Taylor, Philadelphia Examinor.com
http://tiny.cc/uyk6m
5. Bachmans.com (as part of a bigger plant story):
What about ice and snow?  Evergreens can be damaged by heavy snows or ice buildup. On trees such as spruce, the branches will usually bend and recover. Plants with upright branching such as arborvitae and junipers can split and break.
Can I prevent ice and snow damage?  Sometimes it’s possible to reach inside evergreens and tie branches up with something soft. (Panty hose are great for ties, since they are strong, flexible, soft and don’t degrade readily.)  On smaller landscape plants, you can wrap the outside loosely, like lacing a shoe.
Here’s to Glamorous Shrubs and Evergreens! 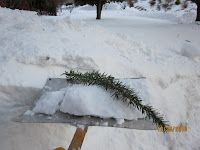 (Oh, and we needed some rosemary for the potatoes for dinner, so I was able to pick a stem straight from the garden.  The tip of the bush was peaking out from under a snow mound!)


And the Coral Bark arbor couldn't have looked more sporting - it's flame red bark in stark relief to the cool white (heavy!) snow.

Posted by Garden Glamour at 2:17 AM