While the rest of the world celebrated great women of all fields of accomplishments for this year’s International Women’s Day and Women's History Month -- for my part, I choose to recognize distinctive “Landscape Ladies.”


It wasn’t all that long ago that a student of landscape design like me had to research and/or purchase antique landscape and garden design or home/shelter books to study classic garden designs. I have a full set of those Garden Club tomes and some Hinck & Wall rare books - when I could afford them. To learn about heritage designers - especially American garden designers, was really pushing it. And women landscape artists? Well, besides there not being more than a clutch of them even being discussed, there just was not really anything available. Then, a groundbreaking reference book - filled with photos, biographies - and yes, at long last: women artists was published. 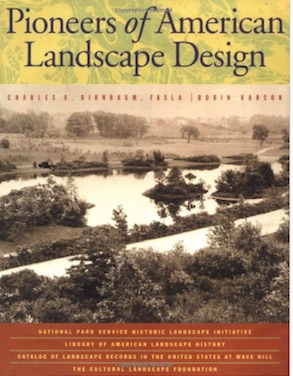 Pioneers of American Landscape Design: The Cultural Landscape to which I modestly yet proudly shared my research with contributing author, Arthur Melville Pearson, for the chapter on Nathan Barrett.  Barrett is a famed Garden State landscape architect who for decades worked for railroad magnate, George Pullman, designing the gardens at his company’s New Jersey Central Railroad train stations, Pullman’s country house in Shrewsbury, New Jersey, and ultimately, the designed town of Pullman, Ohio. I had long been fascinated by Barrett, his designs at Naumkeag and his connection to the Garden State; even before I learned that one of my most favorite garden design clients had owned a Rumson home that featured an extant Barrett garden. I breathlessly described it to my client following a garden tour there while she patiently waited till I finished before telling me that previously - that was her garden estate! I was even more smitten…

Pre-internet - I had done a lot of research on Barrett - for my own inspiration, later for a Garden History paper for my studies at The New York Botanical Garden’s Landscape Design certificate program, and finally, I shared my efforts with the Pioneer book’s contributing writer, Pearson - (who was introduced to me via another garden author and enthusiast; all pre-online social media! Just the Post and phone calls.)

The definitive Pioneers book, authored by the brilliant Charles Birnbaum, president, CEO, and founder of The Cultural Landscape Foundation -- a pioneer himself -- along with Robin S. Karson, showcases 140 American landscape design artists. Here I am extrapolating some of the notable female pioneers to honor for International Women’s Day and Women's History Month - wonderful woman’s days that celebrate the “cultural, social, economic, and political achievements of women.” So raise a glass -- and a spade -- to all the great women.
Now, just imagine what hurdles these early female garden designers and landscape architects had to overcome?

(most of the bio text is excerpted from Pioneers book)

Nellie B. Allen - (1869-1961) - Allen designed in the (popular - especially after WWII) Anglo-American style -- According to Between 1921 and the late 1940s Allen maintained a landscape architectural practice based in New York City, designing residential gardens primarily in the New York and New England area

Marion C. Coffin (1877-1957) - One of my favorites: an active practitioner, received her degree from MIT in 1904. Some of Coffin’s best known projects include her designs for the grounds of Winterthur, the Henry F. du Pont estate and the campus layout for the University of Delaware. She won the Gold Medal of the Architectural League of New York for her work in 1930. Coffin was highly regarded in the field and perhaps the best known female landscape architect to graduate from MIT.

Mabel K. Babcock (1862-1931) - received her degree from MIT in 1908. She had not only an active practice but also taught landscape architecture courses at Wellesley College from 1910-1914. Among her best known designs are the MIT President’s garden and Great (Killian) Court. She may have also been involved in the design of the Wellesley campus and Bates College in Maine.

Marjorie Sewell Cautley (1891 - 1954) Graduating in 1917 from Cornell’s (my beloved father’s alma mater!) College of Agriculture, where she studied landscape architecture, Cautley worked for Warren H. Manning and then architect Julia Morgan. She opened her own practice in New Jersey and, in 1921, designed the 30–acre community park, Roosevelt Common, in Tenafly. In 1924, she was hired by Clarence Stein and Henry Wright, the developer-philanthropists backing the Garden City movement. With them, she worked on Sunnyside Gardens, Phipps Garden Apartments, and Hillside Homes, all in New York City, and on Radburn, in Fairlawn, New Jersey. Cautley is credited with the selection of native plants for these projects, creating interior common spaces onto which homes and private gardens were oriented, and working to enhance a sense of community through landscape features.
Yeah for Native Plants. It took a woman…

Marion Cruger Coffin (1876-1957) - Another of my most favorites designers. Born in New York City and raised in a patrician world, Coffin pursued a career in landscape architecture out of financial necessity, preparing at the Massachusetts Institute of Technology as a special student, and traveling to Europe to study great gardens. Through her friend Henry Francis DuPont, she received many client referrals as well as her most important commission, Winterthur, near Wilmington, Delaware. Other important commissions included Gibraltar, also in Delaware, and Clayton, the estate of Mr. and Mrs. Childs Frick in Roslyn, New York. Clayton has since become the home of the Nassau County Museum of Art. At the height of her career, she designed over 50 significant estate gardens in the northeastern U.S. In her book, Trees and Shrubs for Landscape Effects, she articulated her design theory. Though less well-known than her contemporary Beatrix Farrand, Coffin was recognized for her refined and elegant designs, both formal and naturalistic.

Ellen Biddle Shipman (1869-1950) - Yet another of my favorite landscapers; also of greater renown so others know her work. Ellen Shipman began her career as a garden designer in Cornish, New Hampshire, and gained a mentor in the architect Charles Platt. Platt’s assistant taught her draftsmanship, and from Platt himself she developed a taste for strong axial garden layouts and tight visual connectivity between house and garden. She held her own, however, in preferring the simple clean geometries of Colonial gardens.
By 1920, she had opened an office in New York City, where she hired graduates of the Lowthorpe School of Landscape Architecture. Her most noted gardens are Longue Vue Gardens in New Orleans, the Cummer Estate (now the Cummer Museum of Art and Gardens in Jacksonville, Florida), and Stan Hywet Hall in Akron, Ohio, the latter where she was recommended by Warren H. Manning. Among her rare commercial projects are Lake Shore Boulevard, Grosse Point, Michigan and Aetna Life, Hartford, Connecticut.

Beatrix Farrand (1872-1959) - One of landscape design’s all-time darlings, The only founding woman member of the American Society of Landscape Architects in 1899, Farrand was born in New York City and studied horticulture and garden design under the tutelage of Charles Sprague Sargent, director of the Arnold Arboretum. Through her New York social connections, she received major estate commissions and quickly developed a reputation for her elegant, restrained style and rich architectural detail. Her thoroughness of approach and attention to detail was appreciated by such exacting clients as Abby Aldrich Rockefeller, whose garden at Seal Harbor, Maine, Farrand designed, and Mildred and Robert Woods Bliss, with whom she collaborated for 26 years on Dumbarton Oaks in Washington, D.C. Dumbarton Oaks remains her finest surviving work. Farrand is also recognized for her campus work, including Princeton and Yale.

Farrand’s New York City home is right next door to ours -- Kismet! And I wrote about her previously for Garden Glamour

Continue to honor these astonishing, talented women. Their landscape art can often be experienced today in parks and preserved gardens. Those landscapes that were foolishly and unwisely destroyed can be studied and appreciated via the Pioneers book and other landscape tributes. Now more than ever we need to honor our cultural landscape heritage. I bow before these Landscape Ladies.  Thank you for continuing to inspire me.

Posted by Garden Glamour at 1:45 PM