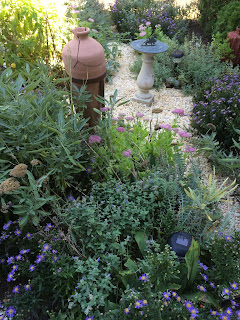 It might well be a sell out so be sure to get to the Garden early, if you didn’t purchase the series tickets.

The Chelsea Gold featured in the series highlights the fact that all three speakers are winners - winning multiple times, in fact - at the RHS Chelsea Flower Show - that Olympics/Super Bowl/WorldCup annual garden design event -- but bigger. I for one vote they trade in the moniker, though. It should be the RHS Chelsea Garden Show. Yes, there are acres of flowers but all those petals, blooms, and leafy greens need to be shown in context -- in a design. And that’s where these garden compositions and the landscape architects and designers work their magic. For those lucky folks who have made the Chelsea pilgrimage, the NYBG series is a terrific peek behind the scenes of this flower blockbuster show. For the more plebian among us, the talks are a revelation into the process of designing a garden period. And designing for the Chelsea Flower Show. The speakers reveal their inspiration, their plant palette selections and the construction. We learn so much.


The first two speakers in the Chelsea Gold lecture series were Ulf Nordfjell, the Swedish landscape architect who interpreted his Swedish design aesthetic and his passion for ecology and the environment to his projects. He won his first Gold Medal in 2007 for his tribute to another famous Swedish plantsman: Linnaeus. He said the aim of the Linnaeus exhibit was to encourage the younger generation to pursue careers and interest in the sciences and to foster a curiosity about nature and research. “Linnaeus was the world’s first ecologist. In his pre internet world Linnaeus used a flower to distinguish all his photos…” Nordfjell won Gold again in 2009 for his Daily Telegraph and 2013 for his Laurent-Perrier gardens. He noted how he approaches his garden design as storytelling. Me too!
He said in Sweden, “We are about connecting people to nature.” This resonates with all who encounter his gardens.

He couldn’t ignore the issue of Climate Change, noting that while Sweden possesses a variety of micro-climates, it is indeed getting warmer there. “We have warmer summers and flooding.”

At Chelsea he chooses to produce modern garden with timber, steel and granite. There was a red wall -- brownish red - common to timber resin. He planted in layers: Maples, lilies, and so on. He used four thousand plants! He used pruned trees and shrubs noting it was quite common for 18th century rich people in Linnaeus’ time to have gardeners to maintain the necessary pruning.

For the 2009 Gold Medal & Best in Show with The Daily Telegraph Garden his initially reaction when they asked him, a Swede, to do the garden that they were “thinking suicide!” However, he researched the 19th century Hidcote Garden - transforming a very British garden tradition. Except that here, “Everything is fake,” he joked With 19 days to do the garden - in the rain and cold - he just wanted to survive. A trick he consider for judging days sunday night & monday morning was to use the compost to make the plants warm. “The plants are then happy and open up their blooms and blossoms - in time for the judges. The real devils of the show,” he added. He uses lots of bulbs with ornamental grasses, too - -helps cover the decaying, seasonal leaves...

He - and his team of more than 150 did the Perrier Jouet garden in a week! It was a haute couture garden inspired by two women: a French who started modern gardens in Sweden in the 50’s and 60’s used simple plants and soft, pale colors; the other is a LA designer who used breakout designs. Modern, minimalist with romantic touches.

Nordjfell also showed some of his private client gardens and public parks. He pointed out we need to safeguard the parks. “Margaret Thatcher took away all the greenhouses,” and many countries cut back funding to maintain the green spaces. He also noted that Food is most important in Europe plant trend. That and romance and more personal styling. “The young are looking back to history; they’re more aware of materials we’re using.” He added that the water issue - it is increasingly a very scarce resource is also a very major concern in Europe - and globally. “

The second speaker in the series was Sarah Price, a British garden designer, a co-designer of London’s Queen Elizabeth Olympic Park and a 2012 Chelsea Flower Show Gold Medal Winner for her Daily Telegraph Garden (those newspaper folks at the Daily Telegraph sure know how to pick a winner!)

Sarah’s talk was “Gardening in the Round.” She was/is a fine artist and a painter. She showed airy, ethereal images of nature that are near her home in Wales that inspire her. Oh, those heather hillsides. She also gets a lot of her inspiration from the ornamental, native grasses of the US that she first saw in Piet Oudolf’s gardens. She sees the beauty and mystery in the environment and translates that narrative to her gardens. And she’s funny.

Sarah showed insights into her background that are the critical, basic elements of her compositions.

She uses color gradations and likes gardens without defined borders. She sketches plant forms and gets height balance out the plant shapes. She said that Chelsea launched her career.

She uses lots of nine centimeters plants so little to no deadheading. The dense planting and compatible, “no soil” reduces the need for watering.


Don’t miss “The Art of Making Gardens” Luciano Giubbilei talk at the Garden tomorrow. I learned yesterday that my garden and fellow landscape design group friend, Linda Tejpaul, of Magnolia Design, LLC, that her son had Luciano do their gardens! How lucky they have their own Chelsea Gold!

Oh, be mindful - there is construction work at the Mosholu Gate at NYBG - and if you're arriving by train - you will have to walk the .5 mile to the next gate.  And security is not courteous about this inconvenience.  (Couldn't have made a side pathway for visitors who arrive on foot?)