Eric Groft, principal at the renowned landscape architectural firm, Oehme, van Sweden & Associates, was the featured speaker at the Metrohort’s inaugural meeting earlier this month.
Earlier that same day I attended the NY Design Center’s annual party/event for all things interior design where I met Jack Staub for his gorgeous Private Edens book signing at the Pennoyer Newman showroom (see earlier post) Proving it's a small world after all, especially when it comes to good design, when I told Jack where I was heading, he said to say hello to Eric.  They are professional friends; Jack said Eric brought him in on some projects.  I was happy to deliver his salutation.
Groft’s artful approach to designing the landscape that in turn, he learned from his former boss, James van Sweden, reflects much the way I approach garden design; inspired by the other fine arts and a Genius Loci (spirit of the place) so I was keen to hear him and see his portfolio of work.
Groft is billed as “encouraging everyone to find inspiration in the arts: painting, sculpture, even dance and ballet.
Whether it’s a ten-foot-square city terrace or a ten-acre expanse, the same principles apply: the intelligent use of positive and negative space, of form and scale, of light and shadow, of rough and smooth textures. Eric illustrates the connection between the path in a garden and the horizon of an iconic painting, the syncopation of jazz and the free form of nature, and the intrigue of a good novel and the mystery of a thoughtfully sculpted landscape. “
Eric shared garden projects from the sandy beaches of Sagaponick to the rolling hills of northern West Chester County. 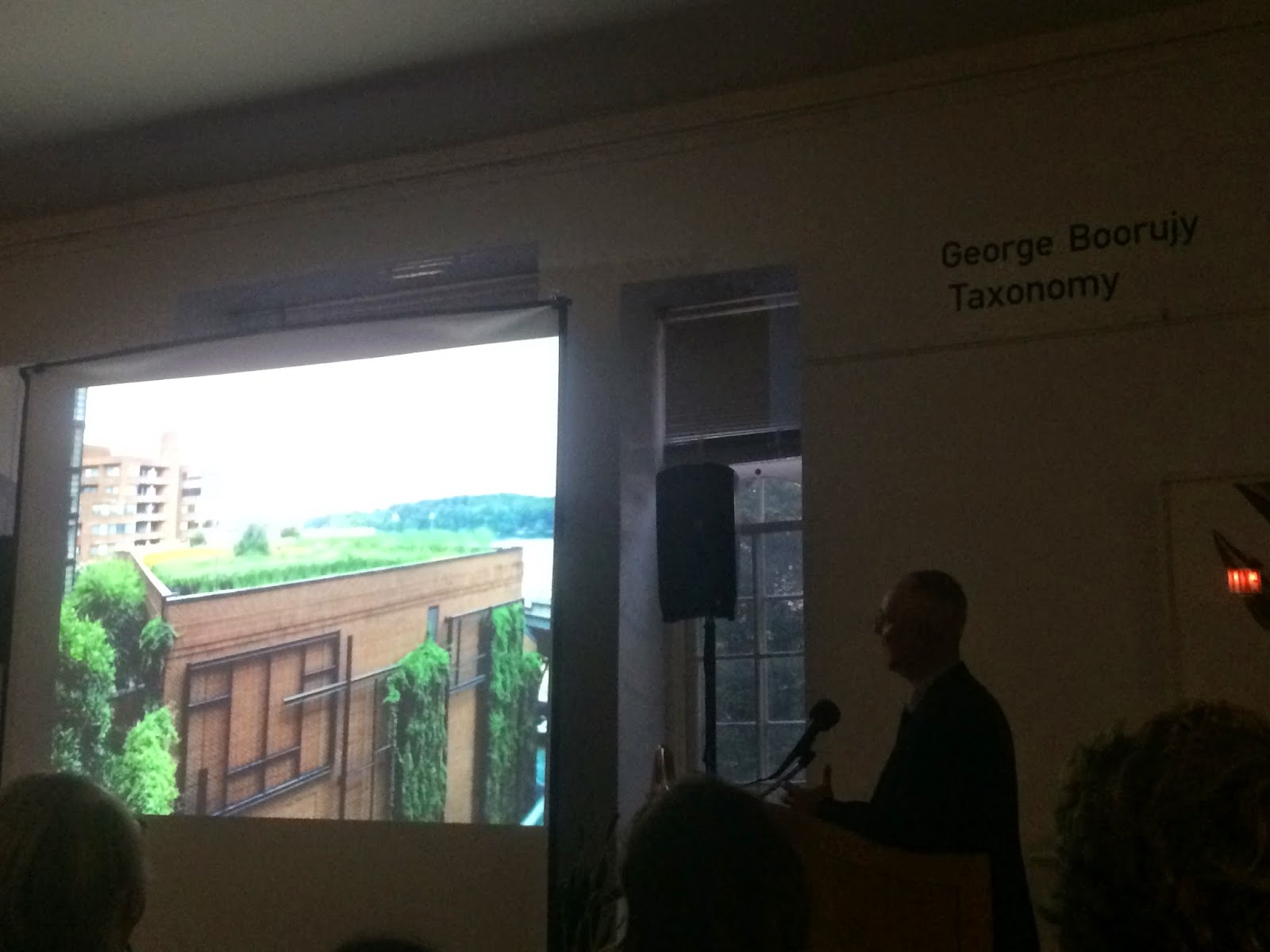 The presentation was arranged by chapters, following the format of The Artful Garden: Creative Inspiration for Landscape Design written van Sweden, and my horticulture friend, Tom Christopher. 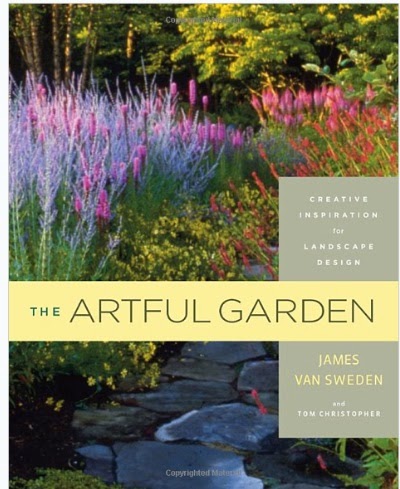 Each chapter begins with a quote from a noted artist that sets the tone for the gardens presented.  For example, the Space and Form chapter introduces us to all the dimensions of a garden.  Lao Tzu wrote: “We turn clay to make a vessel; but it is on the space where there is nothing that the usefulness of the vessel depends.” Or Duke Ellington’s musical art introduction to chapter four with the saying, “It don’t mean a thing if it ain’t got that swing.”
I have an autographed copy of this delightful book. I love the way it laid out and its way of bringing us into artful orbit – connecting garden art to the other fine arts.  It’s an elegant book and a must-have inspirational addition to a garden library.  Van Sweden helped popularize the notion that garden design is a fine art influenced by another art form – referring to it as “The Hybrid Art.” The Artful Garden is filled with images from Monet to a scene from a Kabuki play to illustrate the glamorous inspirations and nexus of where garden art meets the other fine arts.
The breakthrough work with the Chicago Botanic Garden's Daniel F. and Ada L. Rice Plant Conservation Center is a classic already – the beautiful and practical rooftop eco-garden there is one that is widely studied and imitated. 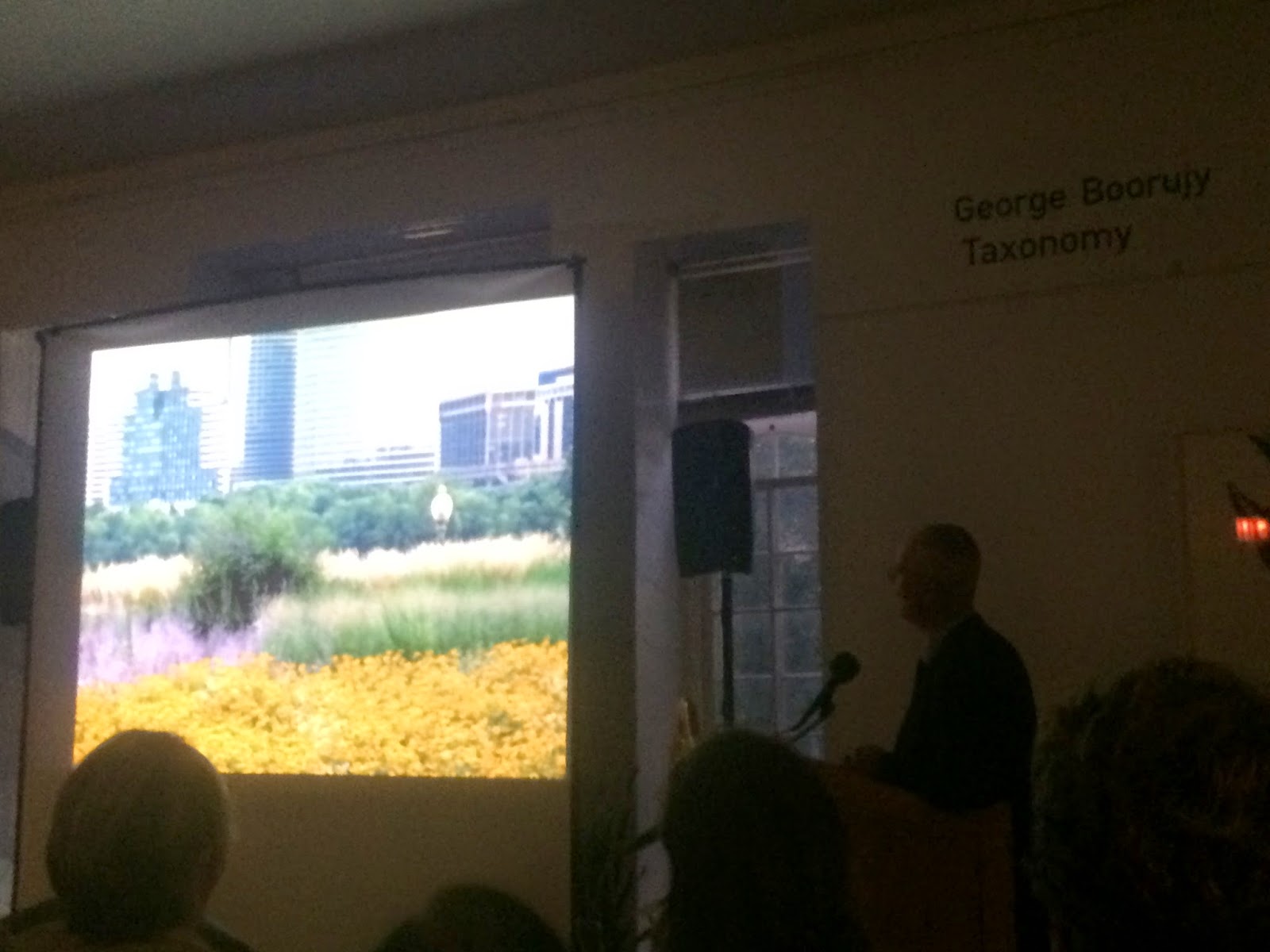 Eric said Chicago’s Green Roof design has made them “A leading authority on green roof research.”  The firm designed the infrastructure for the plants – much attention devoted to water issues from waterproofing to nurturing the “living laboratory” of the planting beds.
The science demonstrates how the 40,000 plants thrive in an extreme environment by using low maintenance – most are grasses.  He showed a field of verbena that is breathtaking.

Eric's firm worked with the Botanic Garden to design and create more than 30 water gardens.

Eric showed how they employed the use of vined trellis bridge as a continuous thread of green in the Chicago Botanic Garden's Great Basin and Water Gardens where – unlike the masses of single plants, the palette here features great plant diversity.  Interesting that funds for transforming the Great Basin came from the creator of the American Girl doll, Pleasant Rowland. (As if having a name like Pleasant, wasn’t happy enough!)

There was a 25-acre Greenwich home with no lawn – but lots and lots of daffodils. There was a landscape that merged house and garden in a grassy landscape that took its inspiration from Monticello. No detail is too insignificant. The firm designed a cobra handrail for a water garden pool, 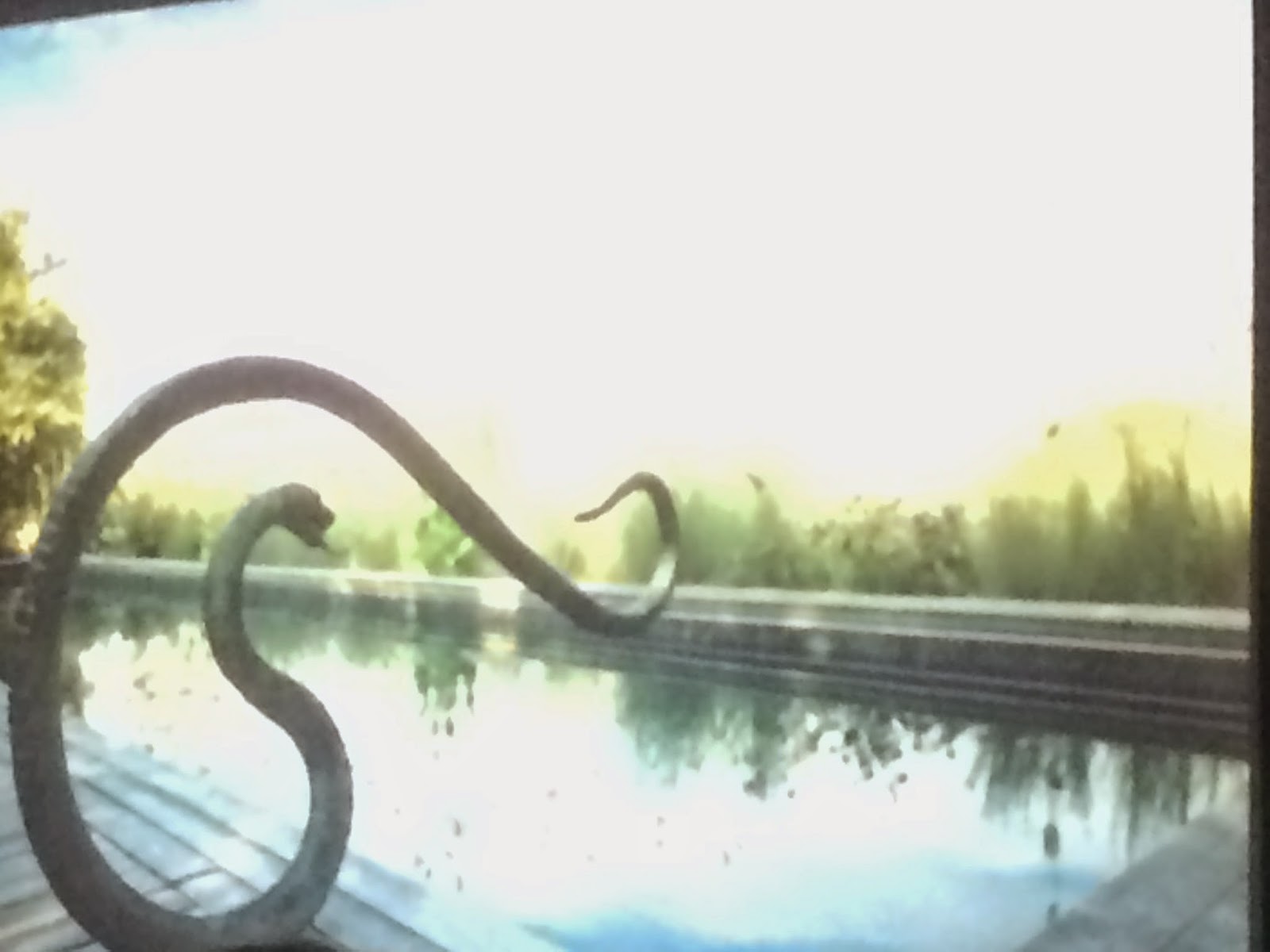 and built-in benches. Eric showed a stunning 5-acre house, swimming pool pond with wet and dry coping that is used to best reflect the plants in the water. Double the pleasure.

Oehm van Sweden Landscape Architects is renowned for its diversity in residential, commercial and institutional work from Manhattan rooftop terraces to a 3,500-acre nature preserve/hunting lodge in Maryland. 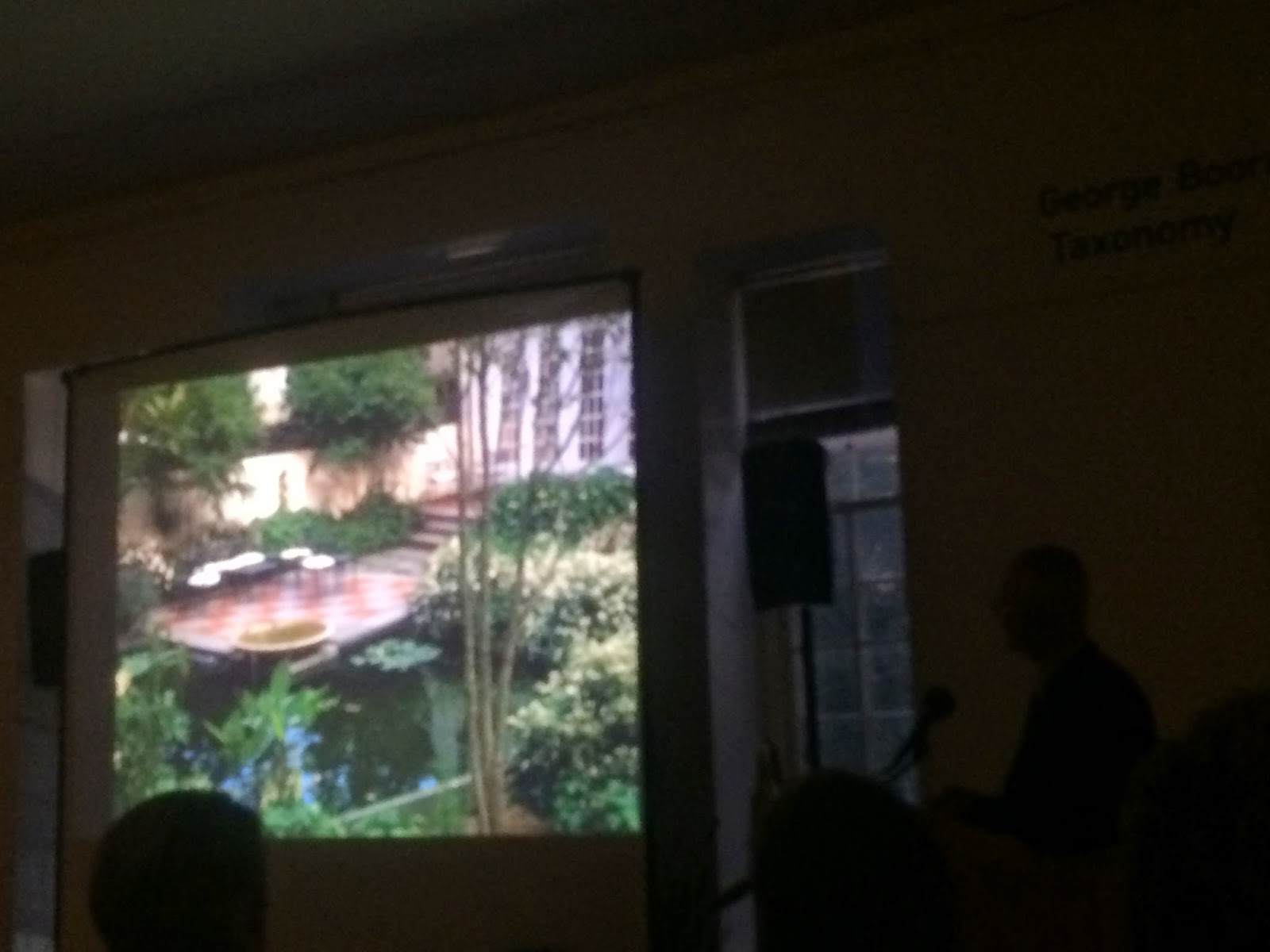 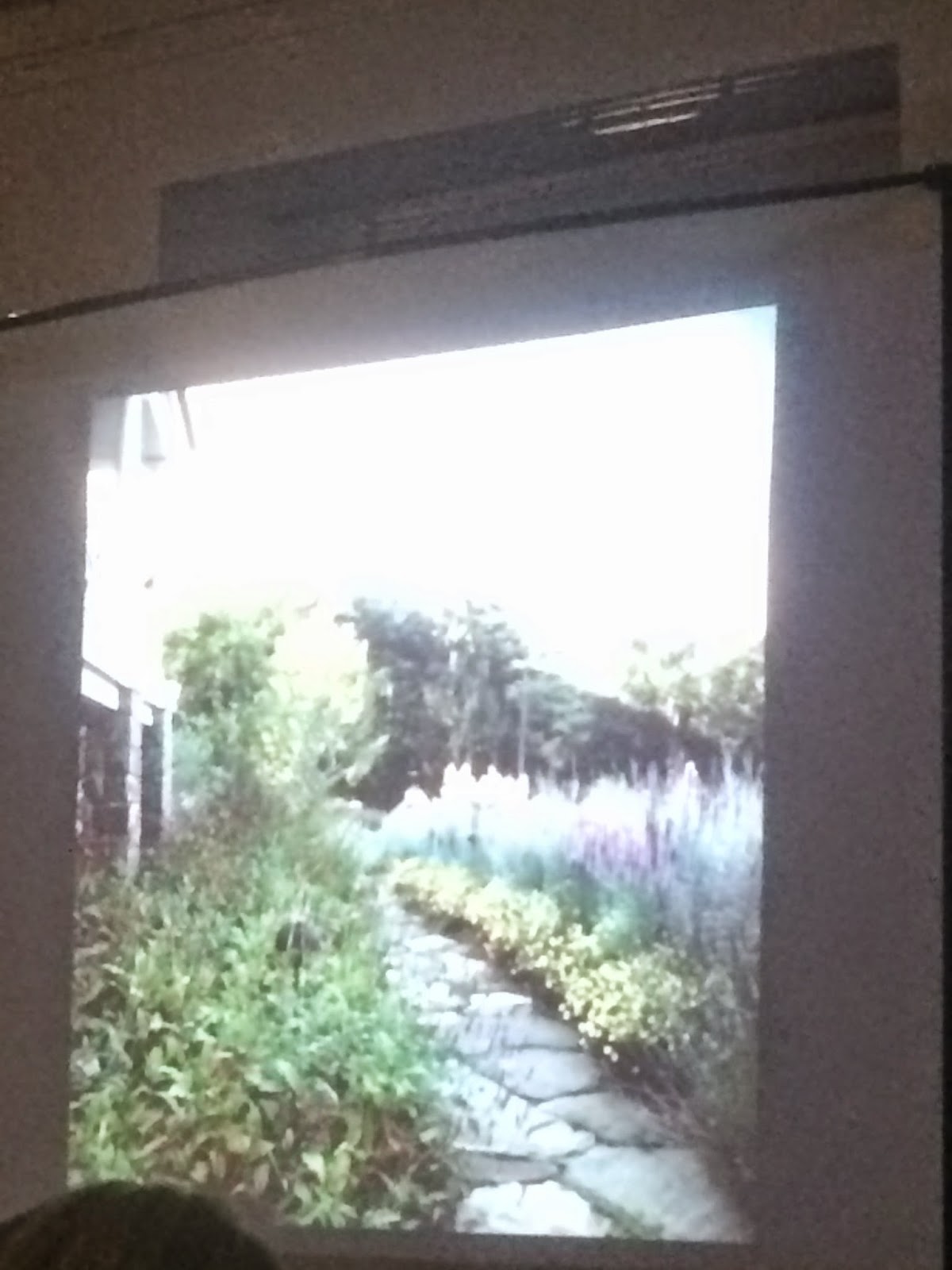 I had intended to post this on the 26th – the one-year anniversary of the death of James van Sweden, the influential landscape architect who helped found the firm in 1977 with Wolfgang Oehme and were very much known for their exuberant use of ornamental grasses and wildflowers – and land conservation. I salute Mr. van Sweden and his passing. The design world mourns its loss...

In his work, Eric writes that he takes pride in his sense of regionalism and attention to the vernacular. He has a passion for horticulture.  This is no small thing.  It’s far too frequent that landscape architects know next to nil about the horticulture and plants. Usually they bring in garden designers or horticulturists and they keep to the hardscaping and land reform.
Eric is widely recognized as an industry leader in environmental/wetland restoration, and shoreline stabilization/revetment.

Via a follow up email, Eric explained about the firm's shoreline work, including some terrific plant suggestions: “The loss of the towering oaks, allowed for better light to hit the lawn and planting beds below and it cleared up an area where we installed some broad lawn steps that led the eye up the hill and connected the “rockery” to the rest of the garden.

The shoreline revetment in Sagaponick was an opportunity for us to do some revegetation
using Amophila/Cord Grass, Limonium/ Sea Lavender, Solidago gramifolium and Eryingium/Sea Holly.
This was done in combination with the NY State beach revetment providing a seamless transition from
our seaside garden to the ocean and extending the beach significantly
Select plants that can take the transition from dry to wet: Panicum, Carex, Solidago, Rudbeckia.”