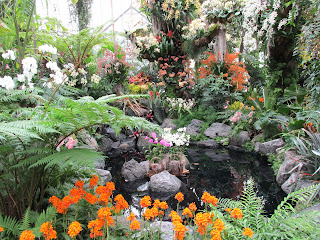 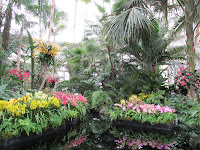 Words fall away…
So does the other world – the one where the lens is not mesmerized by plant portraits.

There is really no need to add text to this post. 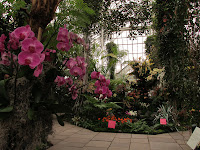 Silly to attempt to augment the stars of the show?
But I’m a storyteller so you will forgive me for a few tidy observations…

The annual Orchid Show just keeps getting better.
I worked at NYBG at the time the very first Orchid show was conceived and launched to much fanfare.  But there was also that slightly malodorous whiff of hort disdain. Yes, every genre has the taste-makers and buzz-builders: those influencers who seem to set the pace.

It was said that the NYBG Orchid Show “merely” showed off an abundance of candy-colored Moth Orchids – the now, rather ubiquitous Phalaenopsis.
The insult being, “How Common.”
The idea that a large portion of the orchid display was made up of orchids you could buy rather on the cheap from – a box store such as Walmart - was just too much to bear, horticulturally-speaking.

The hort tribe - threw its garden-honed muscle and respect behind that other orchid show – the original one (this was rumored to have been displaced from the NYBG homestead in the Bronx – But that’s another story.)

The New York International Orchid Show at Rockefeller Center produced a very sophisticated and rather cerebral orchid show with lots of rare and curious orchid species – more often than not grown by some of the country’s major orchidists.

But all that said, Rockefeller Center was never the Enid A. Haupt Conservatory. 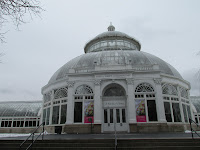 The orchids seduce you from the moment you step inside and shamelessly stare, transfixed at the magic of the orchids – dripping from trees and arbors and rocks. 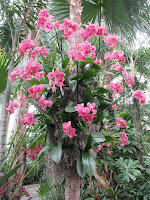 Their glamorous beauty resonates and reflects dimension from the black pool centered in the entry foyer with a gentle plink, plink of the fountain…
Like fireworks, the blooms grab your attention.  And your heart.

The outside world melts into memory, and you give yourself over to the world of orchids.

You can’t get enough.
You want to know where they come from. How do they grow?

The orchid collection is brilliantly curated, too. 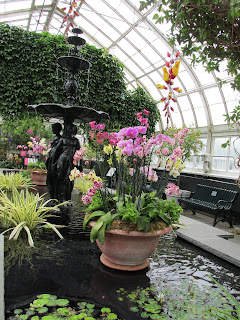 I meant to take a quick peek at the orchids as I was at the Garden for a lecture and wanted to just stop by and take a few pictures before I headed over to the Shop and sign a few of my Hamptons & Long Island Homegrown Cookbooks there.
After all, I had seen the show every year.  What hadn’t I seen before?

But honestly, I couldn't resist the orchids.  They beckoned me to walk among them.
NYBG writes: This year The Orchid Show is designed by Francisca P. Coelho, Vivian and Edward Merrin Vice President for Glasshouses and Exhibitions at the Garden. Coelho is best known for her plantsmanship and key role in the design and development of high-profile shows in the Conservatory.

I downloaded the NYBG app for my iPhone (after deleting a lot of video and photos to accommodate the space!) and felt smug about my cool Hort capabilities.
Curiously, there is no Orchid Show on the App!  How can this be? NYBG notes, “This is the largest exhibition of its kind in the United States.”

Well, one can’t stay too steamed with all that beauty and the orchids just whispering to you to come hither. 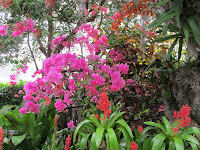 So, I used the coded numbers to call on my phone and listened to either Coelho or NYBG president Gregory Long provide the docent talk, a la the Metropolitan Museum of Art’s classic Phillippe de Montebello’s hand-held, guided tour.

Looking at my notes, I see I scribbled some salient take aways:


I have always been particularly drawn to the Vanilla Orchid (and I am writing a children’s story about it, in fact – part lore and part fiction).
There is a very nice display of this sweetie of an orchid. 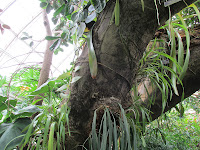 I don’t care for the too-garish Corsage orchid and so passed by these candy-colored show offs.

On the other hand, the wispy flowers of the oncidium Tsiku Margaurite looked like petticoats on the palm tree trunks. 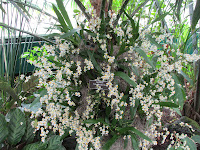 While taking this photo, I overheard a bit of garden humor exchange: A visitor asked the gardener how he keeps it all so green, the hort expert joked, “We use green spray paint!”

The Pacific Paradise was so feathery – they looked like ballet dancers leaping or jete-ing. 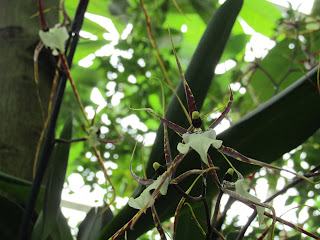 The butterfly orchid – said to have launched “Orchidmania” in England in the 19th Century“ consists of “only four species” and grows on the trunks of West Indian and Costa Rican tree trunks.  What love… 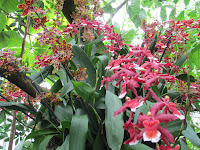 The Orchid Show meanders through the entire Glass House but the show-stoppers are held for the finale. 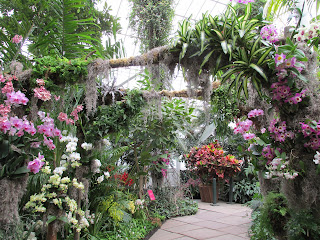 The exuberant displays dazzle the eyes upon entering this Wizard of Oz-like transformation to unbridled brilliance.
It’s a soft fireworks display:  Look here. No there. 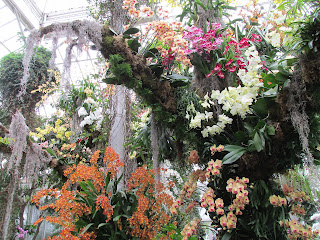 The ambiance created is a sensual assault of color, abetted by the sound of soft Caribbean style Latin music and the soothing tinkle of water from the fountains and limpid pools, along with the steamy, hanging, dripping moss necklaces and terrestrial woodlands. 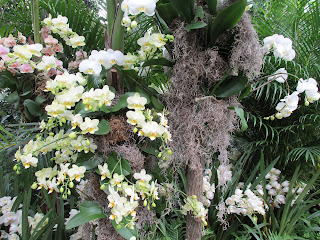 There you will find rare Lady Slipper orchids.  Exotic Bromeliads arch like trained athletes poised.
You will delight in learning how smart, clever orchids save water when rain is scarce. 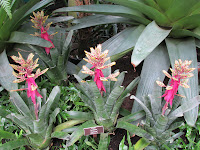 Or how the Dancing Lady Orchid borrows from other orchids…

There are the diminutive ground dwellers – like tiny jewels - that tempt you to look down and bend in for a more intimate conversation. That yellow, sweet sugar is reason alone.

The scented orchids were always a heartthrob for me. I had chocolate and coconut scented orchids and my husband would say it was like sitting with an Almond Joy!
The Oncidiums in the show line part of an orchid allee. The Sharry Baby Heaven Scent oncidiums are redolent. 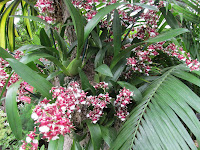 Much has been written about the most rare orchid, Angraecum sesquipedale, Darwin’s Star Orchid.  It is the stuff of legend. 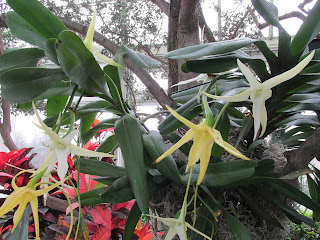 Here, NYBG tells it:
The story goes that Darwin was sent a sample of the flower in 1862. Upon seeing its long, narrow, nectar tube, he predicted that there must be an insect with a very long proboscis (a tongue-like part) that could reach deep within the hollow space to “drink” the nectar at the bottom. In so doing the insect would bump into the flower’s sticky pollen, enabling its transfer from one flower to another.
But no such insect had ever been seen in Madagascar where the orchid came from, or anywhere else. And many scientists believed Darwin was wildly wrong, so he was ridiculed for his prediction.
Nonetheless, Darwin firmly believed that the star orchid had developed its long nectar tube as an adaptation to help ensure pollination because orchid flowers have their pollen in a single mass and cannot disperse it as other flowers do. The orchids need their specific insect pollinators to survive.
Sure enough, about four decades after Darwin’s prediction, an insect with the exact physical characteristics that Darwin had predicted was discovered. Called the Hawk Moth, its scientific name is Xanthopan morganii praedicta, which is Latin for ‘predicted moth’ in honor of Darwin. (Watch a nighttime video showing the moth interacting with the orchid.)

The happy, pansy-face orchids bid you farewell near the exit. 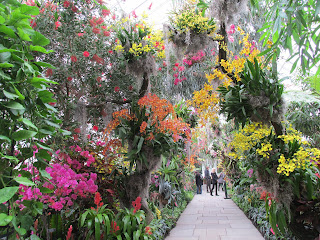 The Orchid Show runs through April 22.  Don’t miss it. If you’ve seen it once – go again.

Do you grow orchids? If you do, what is your favorite?  If not, try it.  Orchids are easy and most rewarding to grow.  I've often said that orchids are like the jewelry of the plant world. 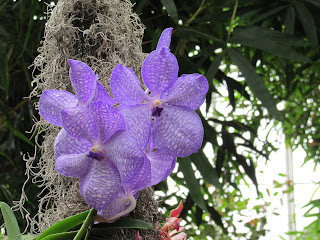 Posted by Garden Glamour at 2:43 PM