It was, among other superlatives, a delicious success.

Pick any evening in New York City and it’s a sure-fire bet there are dozens of top-tier happenings all over town.

Thursday June 14th was no exception.
There was a Chase Bank 5K race in Central Park.
My Metro Hort association had rescheduled their tour of the NYBG Monet Garden to the same night.  Really, what are the chances?

President Obama and First Lady, Michelle were holding court at a fundraiser hosted by Vogue's Anna Wintour and Sarah Jessica Parker – for a dinner at SJP’s West Village home – not too far from our building.  (Shhhh...  As an aside, word here is she and husband Matthew Broderick tried for years to buy in our building, but management at that time was “afraid” stars would bring the paparazzi.  Too bad, they are such nice family people. And true New Yorkers, too.)
The Board here has since given up that “discriminatory” policy and we can quietly boast more than a few artists as building mates, though Julia Roberts flew the coop/co-op.
Enough sidebar scoops.
Just enough so you see what rigorous opportunities peek out from more than a few corners in Gotham.

Further, how tough was it to get a taxi uptown?  Impossible. After far too many minutes, the doorman hailed a yellow hack and I had to beg the off-duty cabbie to get us to The Hort in time.

See, the thing is, not unlike SJP’s Carrie Bradshaw on-screen character, I am a writer.
So not like her, I write about food, gardens and restaurants, farmers markets, artisanal food making...
But there was a certain karma-like parallelism in the calendar that night.
And the fact that I was able to nab this cab – was a made-for-TV moment.

The hack driver spirited us uptown in no time, making up for my last minute script rewrites/cuts, and an all-too-short practice run-through.

And then, just like that, we were getting off the elevator at The Horticultural Society of New York to be greeted at the elevator by none other than George Pisegna, Director of Horticulture at The Hort.  George is an enthusiastic advocate for The Hort’s mission to sustain the vital connection between people and plants; moreover, he is a garden hero.
He was happy and enthusiastic to see us and elated about the attendance for the evening.
Therefore, I was too. 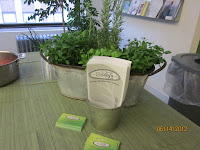 Already setting up was chef Bryan Futerman, Foody's Restaurant and Cafe Facebook page, Water Mill, and a featured Homegrown chef from the book.


It seemed natural that chef Bryan and his inspired grower, Jon Snow, from the Hayground School would have traveled to Gotham together.
There, leafing through the Homegrown Cookbook and smiling as we entered, was the inimitable garden sprite, Master Gardener, children’s garden mentor, and artist, Jon Snow.
Later, during the presentation, we would learn in a personal, almost poetic prose, how he works with the children – and the plants – to weave a magical relationship with the natural world.  The kids get their hands in the dirt, grow food and learn to cook through the “Young Chefs Program” – designed by another featured Homegrown Cookbook chef: Joe Realmuto from Nick And Toni's restaurant, who created a program that was long a dream of the restaurant’s late owner, Jeff Salaway.   That dream – “to bring together kids, chefs, and food in the spirit of community” is a true success.

And not unlike an aim of the Homegrown Cookbook.

The program and the children’s garden is delightful.

Soon, Chef Tom Schaudel arrived, his food larder in tow in what looked like an oversized mobile cooler.
He’s done this before.
Chef Tom is an experienced, much-loved Homegrown Long Island chef.  Chef Tom Schaudel Restaurants
He presides over a virtual empire of restaurants, strung across the Island like jewels on an heirloom necklace.
In fact, he owns Jewel (!) – his Melville restaurant – and CoolFish, A Mano, Alure, and, along with his daughter, Ross Schaudel Catering.  Schaudel has also authored the highly popular book, "Playing with Fire: Whining & Dining on the Gold Coast"

Arriving from an account meeting downtown, Kareem Massoud, Paumanok Vineyards' grape farmer and vintner – and inspired grower to Chef Tom Schaudel as written in the Homegrown Cookbook, bringing two of his family’s estate wines: a Rose and a Chenin Blanc. Both were rich, nuanced, and tasty partners to the evening’s recipes, and very popular with the Hort’s guests, too.

Chef Tom and Bryan made a recipe – or two – from the four recipes every one of the 27 chefs graciously and lovingly provided for the Homegrown Cookbook.

With a large Hort audience of food and drink fans eager for Homegrown food and food stories, the guests were soon asked to take their seats.

With lots of beautiful images of the natural landscapes of Long Island and the behind-the-scene photos of the farms, gardens, waterways, honey and duck growers, oyster and berry farmers, I told the story of the making of The Hamptons & Long Island Homegrown Cookbook (a coffee table, hardcover cookbook, also available at B&N and now at bookstores) and the larger, food story that evolved in the world surrounding the writing of the book: from Slow Foods to urban farming to the resurgence in Farmer’s Markets and edible home gardening, including the White House’s edible garden. I noted the First Lady is also doing a book tour for her just published book, American Grown. 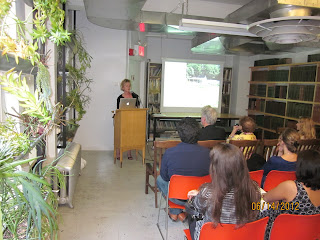 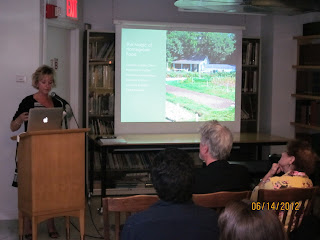 Growers Kareem and Jon spoke about their successful gardening and farming on Long Island.  Noteworthy was the Hayground children’s gardener, Jon, commenting that his 91-year old Mother commented he was a success at long last, because he was speaking at The Horticultural Society of New York!

And speaking of matriarchs, Kareem shared how his mother had a biblical quote framed in their kitchen admonishing, “Son, go and work in the vineyard today.”  Clearly, his mother – and family -- recognized a higher authority to a lifetime of honored labor was calling them.  It shows.

Following the talk, the guests were led back to the area for the chefs’ food and drink demo highlight part of the evening’s program.

With nothing more than a burner –the chefs made their four-star recipes right at the lovely tables – complete with sweet, picture-perfect pot of herbs growing in tiny wash bins -- set by The Hort.
The Homegrown chefs had the attention of everyone around their individual tables, allowing for interaction with the foodie fans, which were again sipping the crisp, bright flavors of the local Paumanok wines.

The two Homegrown chefs wielded their magical alchemy to tease out extraordinary flavors to a delighted audience. They had them crying with gastronomic joy at their creative, distinctive Long Island cuisine.

The Recipe can be found on page 123 of the Homegrown Cookbook.

Chef Bryan would have made his famous pizza with local vegetables and dough made with fresh, local honey – I am not kidding – but without the wood-burning oven, guests would’ve been shortchanged.  (Gotta get Kalamazoo to donate an oven to the Hort, don’t you think?)
Instead, chef Bryan opted to whip up the Cherry Wood-Smoked Brisket recipe found on page 40.  Again, a few simple, local ingredients, but the end result had guests shaking their heads in culinary wonderment. The meat was melt-in-your-mouth tender but Rocky-strong in its integrity as a star ingredient.
To add to the standout taste, Chef Bryan served the brisket on dark bread infused with sauerkraut (I am not making this up!) with a smoky thousand islandish dressing and a spicy tomato.

Speaking of tomatoes, there are none in chef Bryan’s Watermelon-Red Pepper Gazpacho. For extra credit, Chef Bryan also made the delightful twist on a summer classic – found on page 41 of the Homegrown Cookbook.
The cool, sweet watermelon flirts with the spicy hot jalapeno right in front of all the others, er, the other locally grown veggies, including onions, celery and peppers.
A perfect appetizer served in small cups for a BBQ or dinner party. Or a main course for an easy-to-make family meal.  It’s sweet and smoky. Dial the flavors up or down…

Book signings accompanied the food tastings.  It was a sell out!  Food and Hort friends from New York, California, North Carolina and the Garden State were there and recognized the Hamptons & Long Island Homegrown lifestyle as featured in the book is one they admire and can cook up at their own home, wherever that may be.

George from The Hort honored this author and the Homegrown chefs and their inspired growers by purchasing some books to give as a gift to some key Hort supporters.  Shhh. It’s our secret until they take the wraps off their “Hamptons & Long Island Homegrown Cookbook!”


And words can’t express how honored I was to sign a book for The Horticultural Society of New York’s illustrious library.  A dream come true…

Cheers to a Homegrown life.

Posted by Garden Glamour at 2:00 PM