Billed as a talk about “Relationships of Ecological Design with Landscape Architecture” and featuring the landscape architect and urban ecologist Alexander Felson, the talk was full of anticipation on the subject of the love child of science and design that needs exploration and discussion.
Its moment had arrived.
Unfortunately, the compelling topic’s prime time in the spotlight fell short of expectations.
I can’t quit put my finger on it but as I looked around the PowerPoint-lit room in the Central Park (NYC) Amory where all the Metro Hort lectures are held, there seemed a discernible – and in some cases, audible – tsking or whispers of “where’s the plants?”
You see, horticulture fans want to see pictures of plants, wildlife. “Before” and “After” images are especially well received.

And Alex – while undeniably knowledgeable and informed – he used no notes and was animated in his delivery, conveying his downright passionate about the topic and the issues – couldn’t seem to connect with the attending audience.
People started to leave at the appointed conclusion time, despite Alex’s getting the OK to continue for another half hour.
I thought maybe it was me.  I want to be sophisticated about this most important subject and burgeoning field.  But no, the stony silence screamed, “This is not grabbing me. It’s kinda' boring…”

Further, the morning after was a New York Botanical Garden lecture and attendees there were making “Icky” faces when asked about the Metro Hort lecture.  The reviews were in.  It is undoubtedly a compelling, fascinating topic. But the lecture wasn’t interesting, sad to report.
Perhaps if it was more focused…
Or used more vivid images of plants rather than almost exclusively the flat, one-dimensional charts, diagrams, and graphs that were on the screen. (I only shot plant pictures for this news post.)

I’m sure there is a thespian or performer who was quoted as saying, “Know thy audience.”

In all fairness, there were those who said despite the academia-style presentation, we do all need to learn about the reconstructing landscapes and ecosystems using applied ecology.  There needs to be a proactive approach to embedding science into the system of landscape design.  Research needs to be included as part of the design process too.
There was no argument from any quarter about that. It was just how it was delivered.

Nevertheless, the points are worth repeating here.
The opportunities for restoration and applied ecology will only increase.
Alex showed more than a few examples of innovative restoration projects including the Presidio Trust in San Francisco, NY’s East River waterfront, the World’s Fair grounds in Queens, NY, and the 200 acres in Queens he’s working on as part of Mayor Bloomberg’s Million Trees Program.
And a cutie pie one using the life cycle of oysters.

The Presidio project brought together a team of landscape architects and designers and ecologists to talk about their broken communications and to determine how to reach consensus.
This part of the process in creating adaptable landscapes, while a key dynamic, doesn’t make for lecture fodder… Isn’t it true in any business or working dynamic that it’s hard to get things done but discussion and goal setting and compromise work get to the desired outcome? The answer is yes.

So to me, not a huge surprise that one part of the Presidio’s concessions was a winning result.
No one could take issue with how those traditionalist who clung to keeping things the way they were - however ill-informed those decisions may have been - came round to making some changes so that they could replace 40 trees with local genotypes at Inspiration Point, thus insuring a great view. 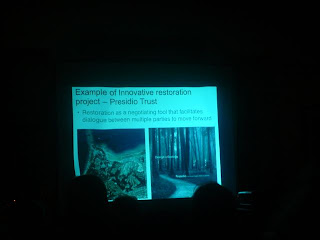 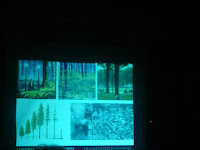 Alex advised that in these situations no one can have its cake and eat it too.
Compromise is the only solution.

The Adaptive Management Approach incorporates a few key elements he says will prove valuable in getting to those solutions. They are:

The Cost & Benefits part of the add-on lecture was kind of a non-starter -- a bridge to nowhere…
In terms of management, costs must be managed. Again, that’s true for any work discipline.
And it’s important, of course, to measure things like the biomass and carbon sequestering.
He cited the development of the system to measure that an urban tree will take anywhere from 11 to 41 years to pay back its carbon survival.
And yet, he noted there are yet no ways to measure the human cost of interaction. Why not?  How can we overlook this most important element of watching children in nature, developing a relationship with nature?

However, Alex is working very hard to “build a bridge”  – to become part of the landscape architect frontiers of ecology.

One goal he’s got his eyes set on is Parking Lots – those blights on the suburban landscape where once there was probably a farm or meadow, and are now locked into unsustainable asphalt…
He cited the overabundance of “human modification of land that influences the aesthetic.  We need to create water absorption, nearby wetlands, perhaps recirculating water and increase permeable surfaces in the parking lots – and in urban environments in general. 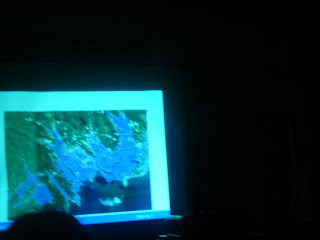 Another very important project is one he’s working on in Bridgeport and Old Saybrook, Connecticut.  Working with the Nature Conservancy they’ve created mapping that surveys the area that that will indicate which neighborhoods and homes will be under water given the expected storm surges as a result of climate change.
There was already a lot of damage after the summer’s hurricane that left more than $300,000 worth of damage behind and more than a few townspeople feeling like those living on the coast are a tax burden for the rest of the citizens.
It’s so difficult to tell a third generation family there that their home will be under water or that they have to leave and move away, Alex commented.
Alex pointed out how work is being done to use Amtrak train tracks and from there through to the tide gates.
They tried to get the town to raise the utilities from the basement but that suggestion went nowhere.
He proposed they not think of their neighbor as random but rather as a sub basin watershed
And so it goes…

“Restoration ecologists work with designer and other practioners in the development of resilient and adapted landscapes. Traditionally focused on reconstructing ecosystems of historically documented landscapes, this approach is being reassessed in light of changes in site conditions and pressures on ecosystems from global environmental changes 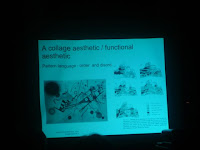 Alex discussed his involvement and work in projects where novel ecosystems that use historical knowledge of restoration and recognize the value of creative environmentally sensitive solutions that are functional and aesthetic.” 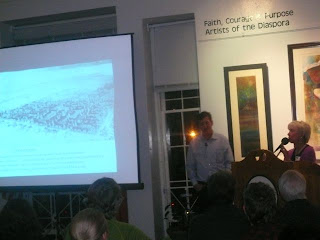 Alexander Felson is a landscape architect and urban ecologist, is on the faculty of both the School of Architecture and the School of Forestry and Environmental Studies at Yale University.  His projects include a Harlem community garden, The East River Salt Marsh project with Ken Smith, and a real estate development in the Tuxedo Reserve where he brought a together a multidisciplinary team of academics and practioners to work the developer community planning boards, and regulators to define and encourage responsible management of urban eco

Posted by Garden Glamour at 6:28 PM