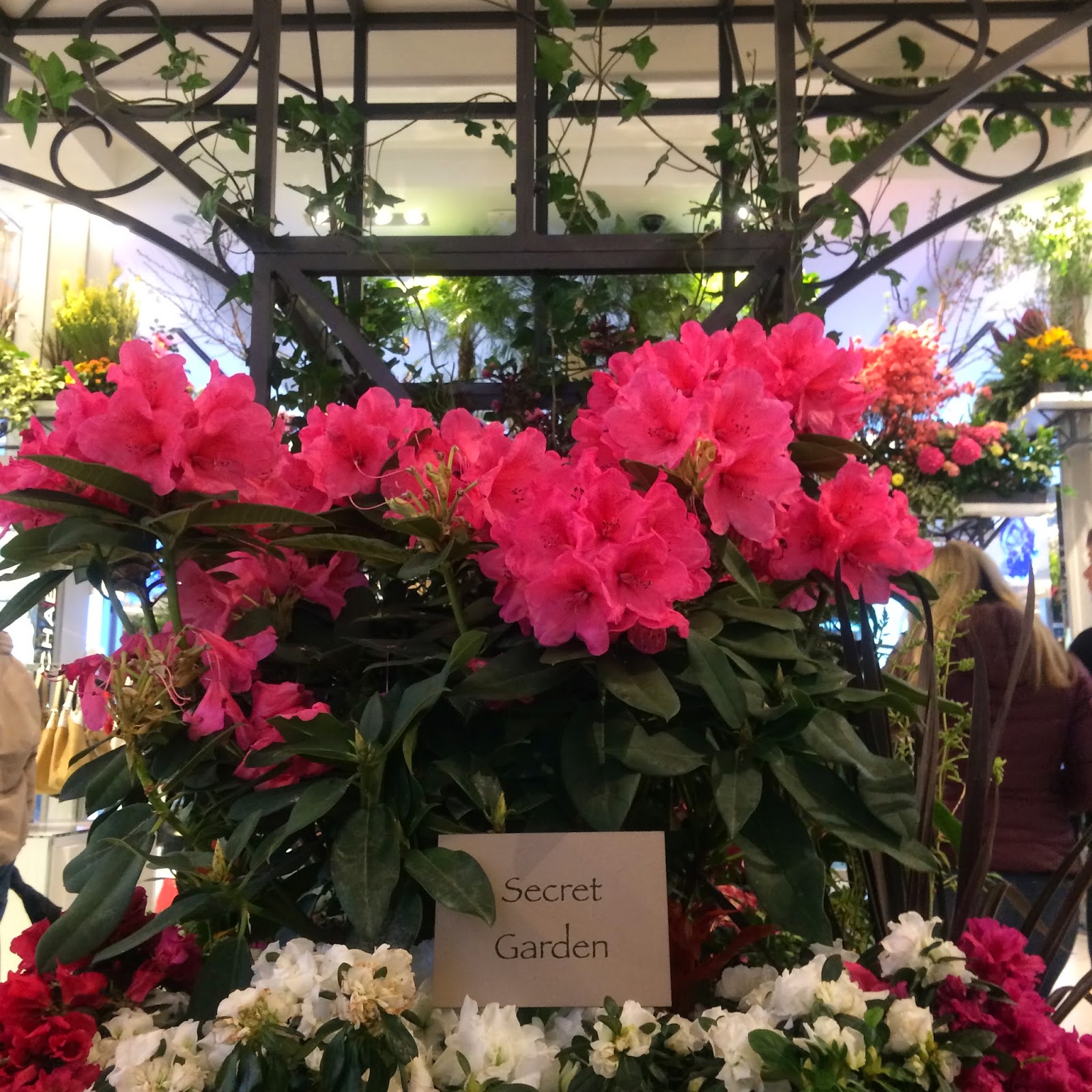 The Secret Garden was the theme of the Herald Square, NYC Macy’s Spring Flower Show this year.  www.macys.com/flowershow

Judging by the swarms of people elbowing each other to eagerly pose near the lush, colorful, blooming floral displays with family, friends or in Selfies - the cat was definitely out of the bag!

The spectacular, Free, annual flower show is a perennial – favorite!
(Sorry, can’t resist all the botanic wordplayJ
Flower fans from nearby and around the world set their spring calendar by the event - which this year ran from March 23 to April 6th - to attend professional demonstrations, special events and guided tours. 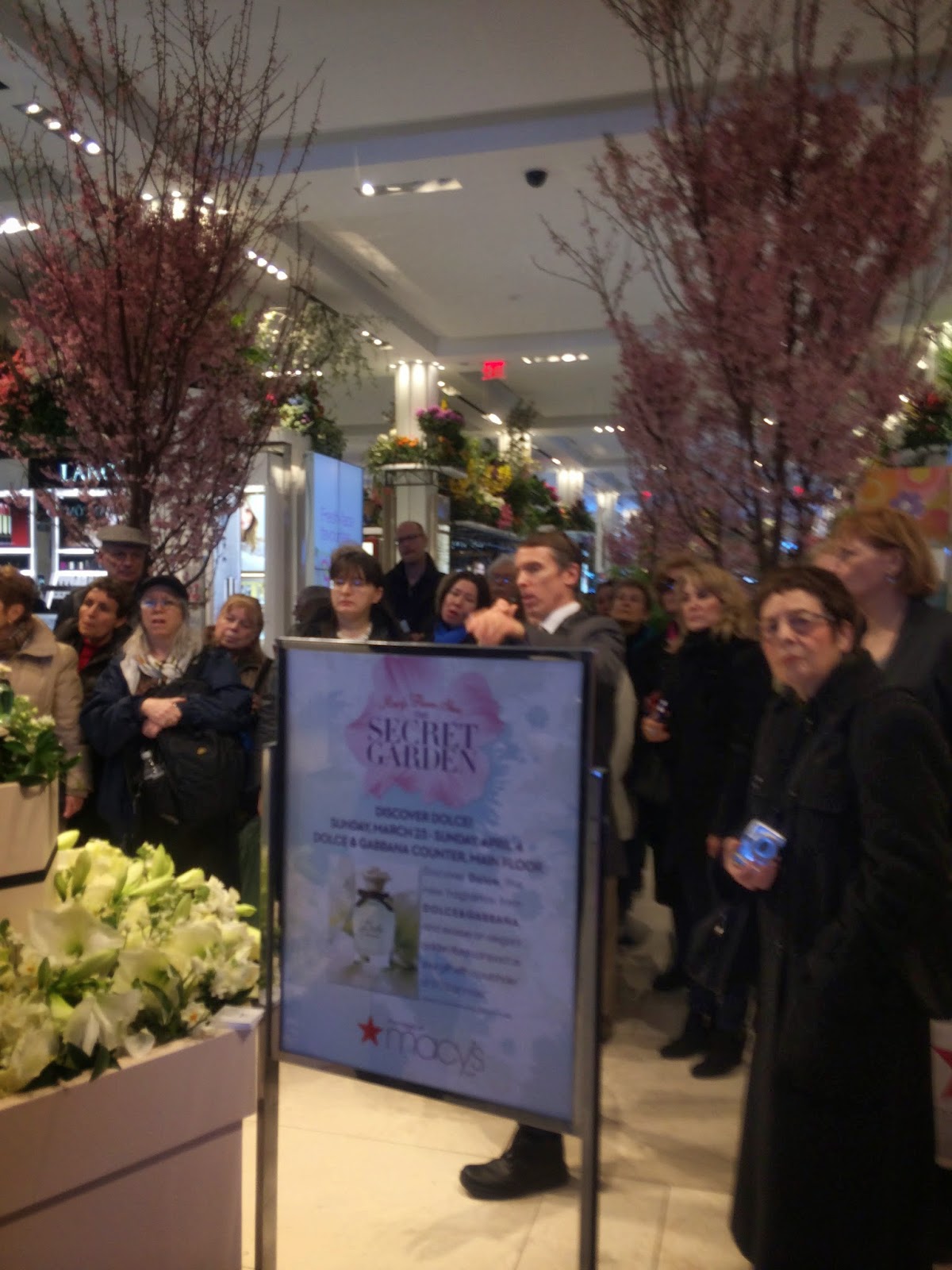 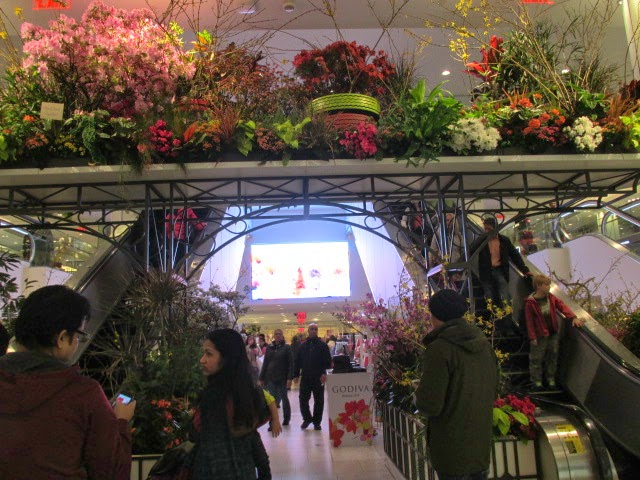 Who knew that a retail sales floor was also a glamorous garden bed?
The garden sprites at Macy’s Entertainment and Parade group accessorized the store not unlike a botanic garden conservatory.
Dangling like giant earrings from the ceiling and miles of elevated fashion runways from pillar to post: flowers and plants everywhere!
Minus the pollinators. 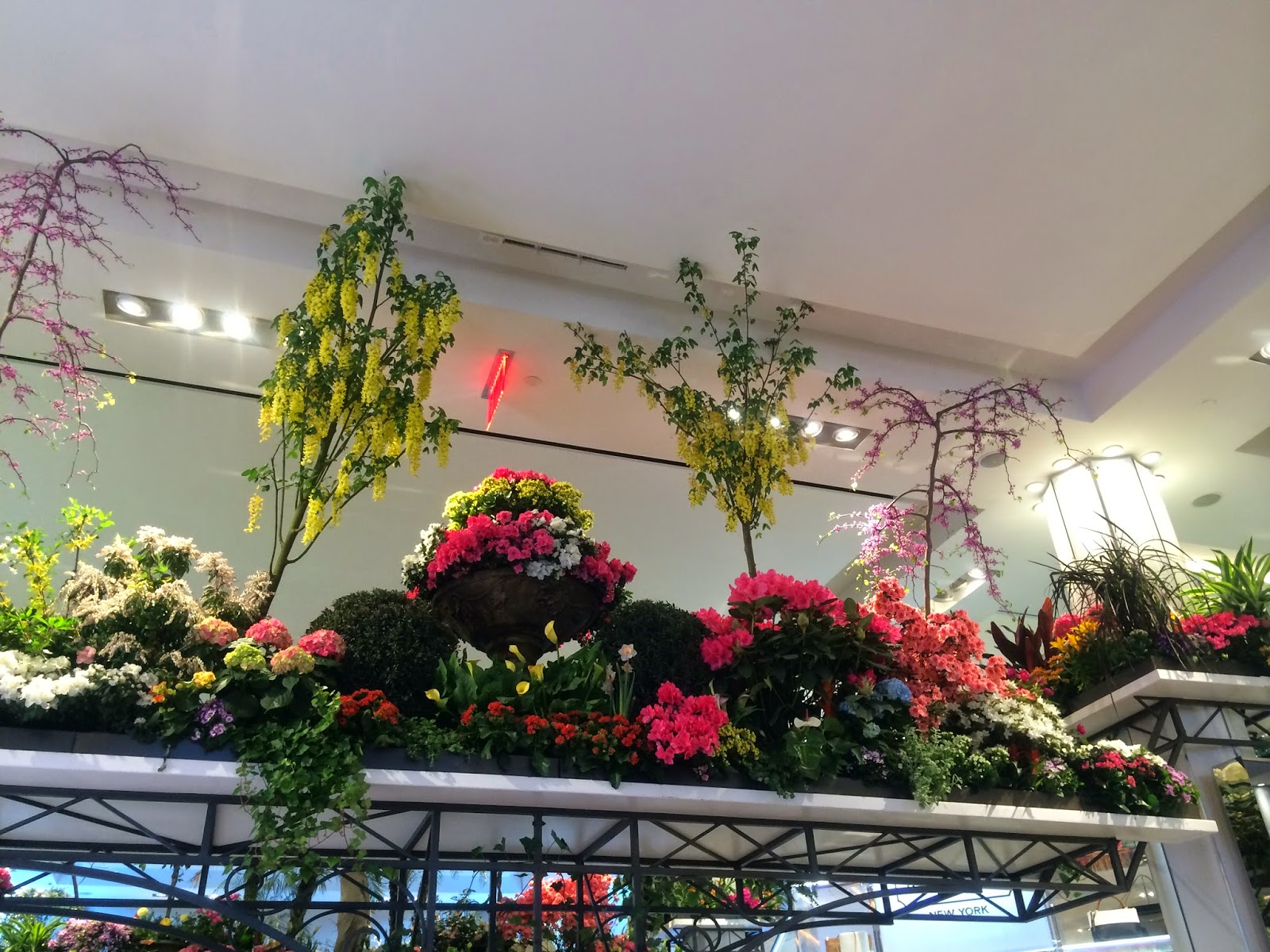 Within the Secret Garden theme was the Garden of the Mind.
The two most prominent garden compositions were located on the Mezzanine with three bridges “linking” them, further fostering the feeling you are being embraced by flowers and greenery.

Looking out and across from the perched garden there, I couldn’t help think of a floral analogy: the shoppers looked like so many bees flitting from counter to counter; stopping to admire the floral displays… 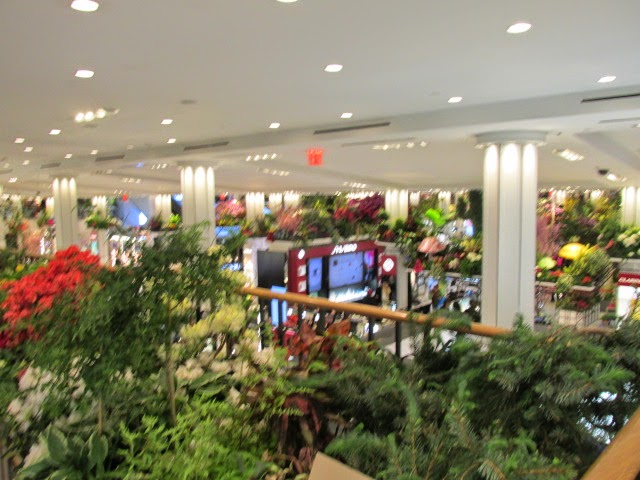 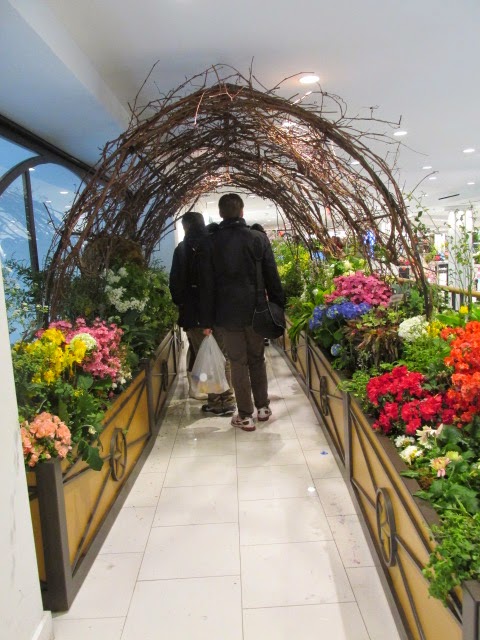 The mezzanine arbor was fashioned with beds that were filled with a rambunctious mix of plants: evergreens, ranunculus (LOVE this flowering plant!), astilbe, pansies, lilies, iris, clematis, camellia, and more.
This garden display was located near the windows and a Starbucks so you could also sit and enjoy the winter garden scene. 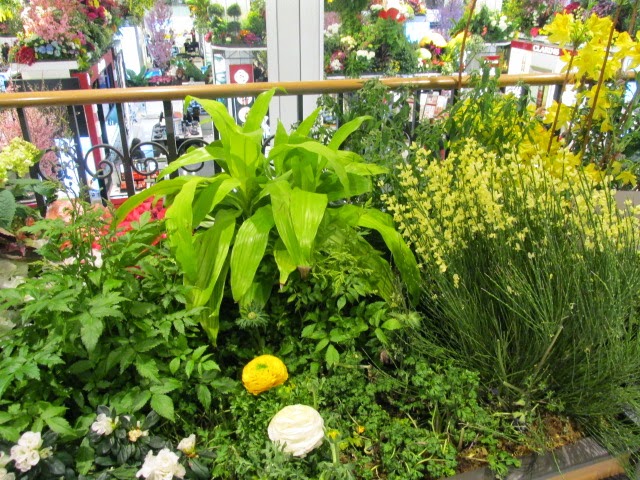 The opposite side mezzanine appeared less pronounced but its ambitious Under the Sea Garden that highlighted Cirque du Soleil’s Amaluna – now at Citi Field -- showcased beds filled with architectural-looking plants of aloe, asparagus fern, and tropicals, including bromeliads. 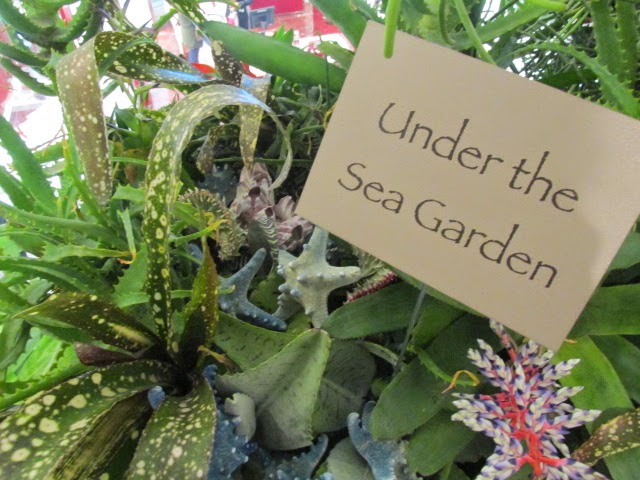 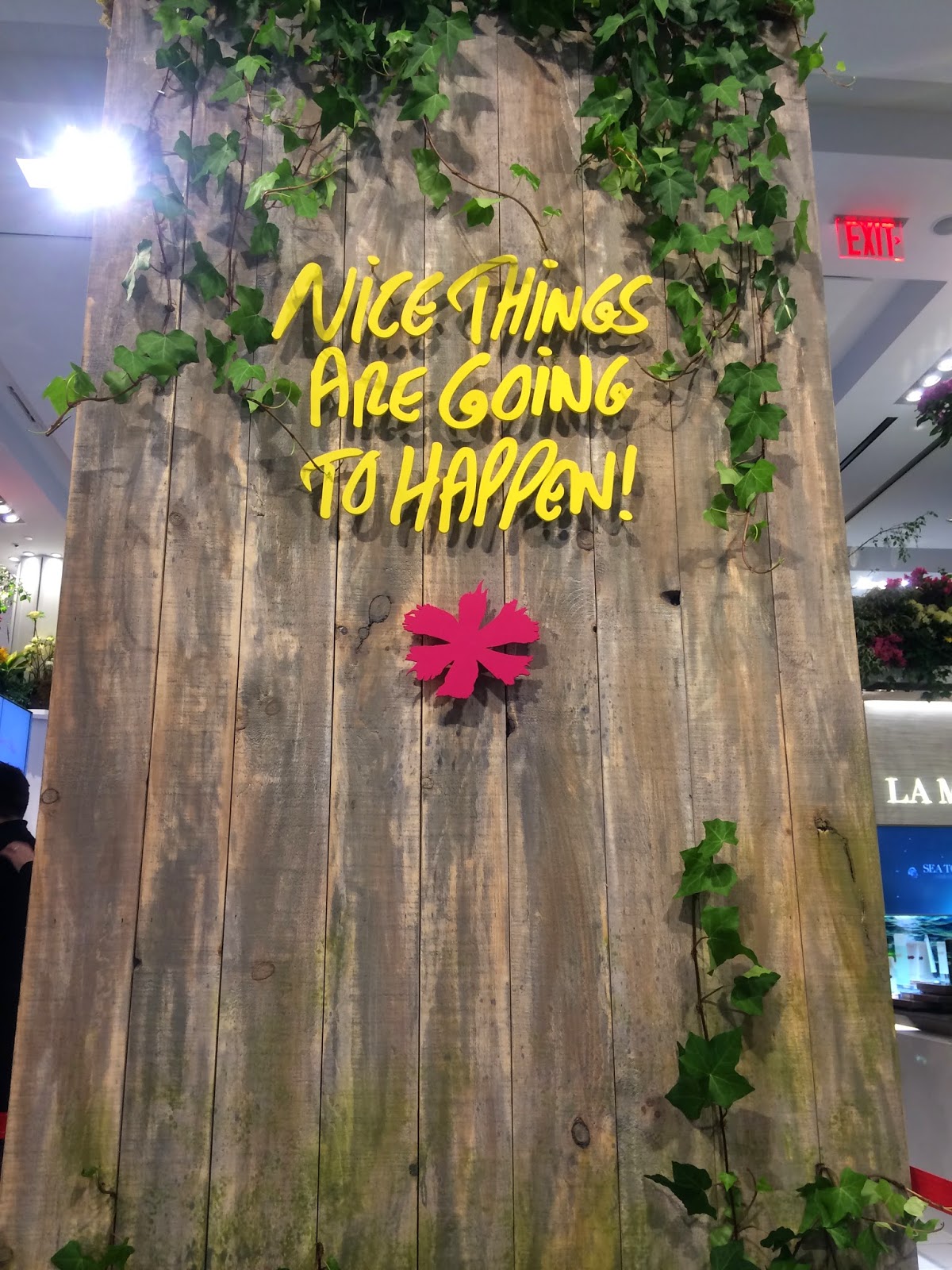 Five celebrity floral designers flexed their botanic style, creating a showstopper for the Bouquet of the Day display. 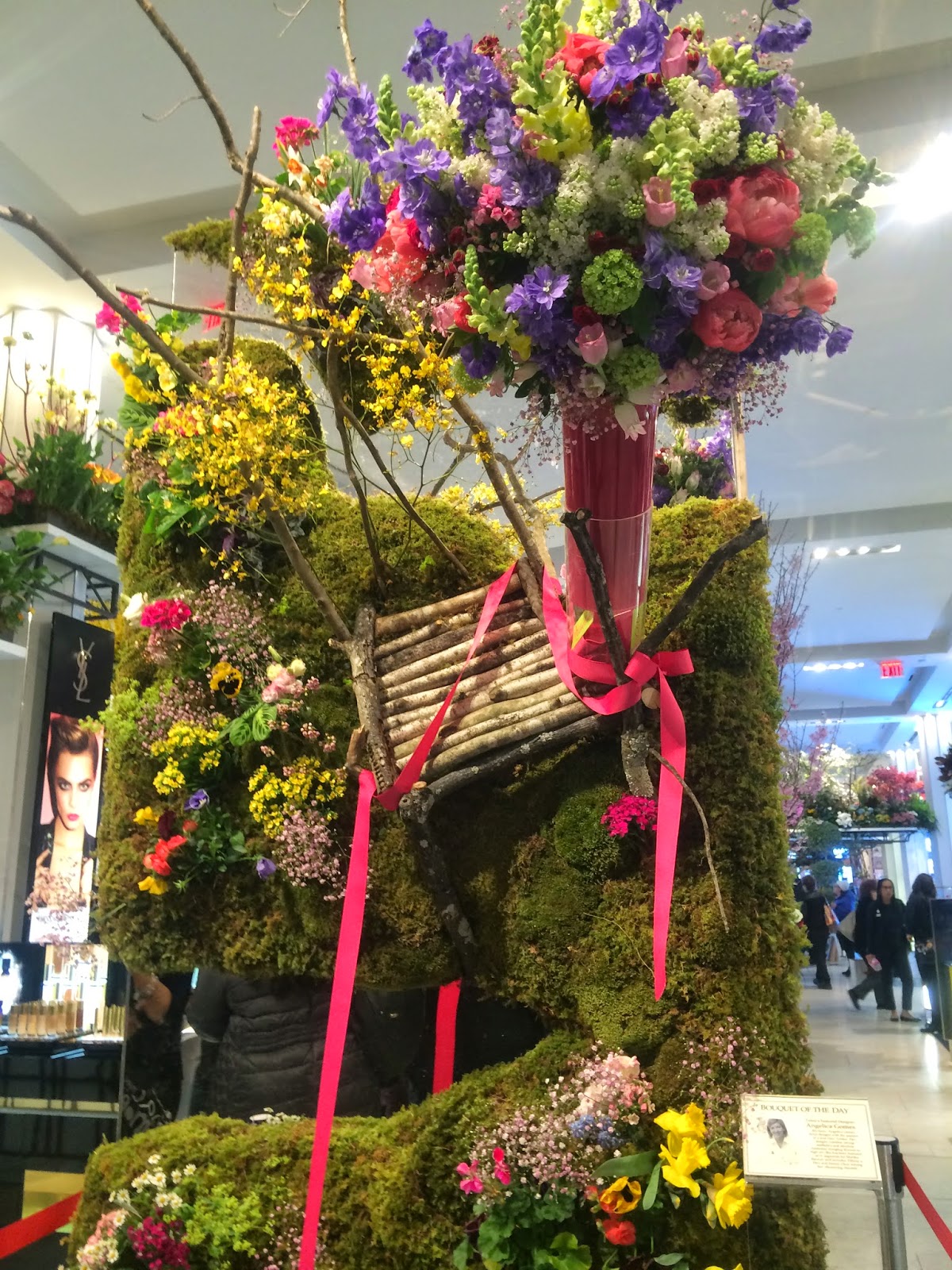 Their floral creations were in the spotlight for two to three days. This kept the bouquets fresh and the shoppers coming back to see the new look.  In fact, Macy’s told me the Bouquet of the Day was so popular and so many people got up close and in the display, that they had to put crime-scene tape around the design’s display!
At least the tape’s pretty pink color was seasonally appropriate…

The five floral designers are so good, worth noting and sharing:

Floral compositions were worked into the merchandise displays too, as well as the featured gardens.
The plants seemed to be selected for their sheer Wow appeal. 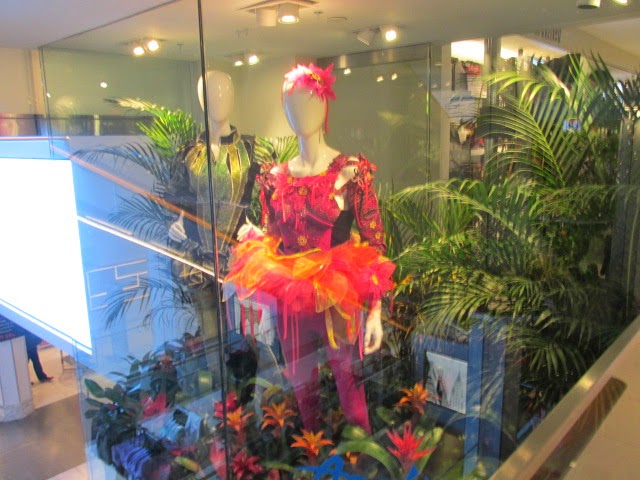 Obviously, there was no apparent thought given to the taxonomy or hierarchy of the plants’ display.
If it’s a looker, it made the cut to a starring role. 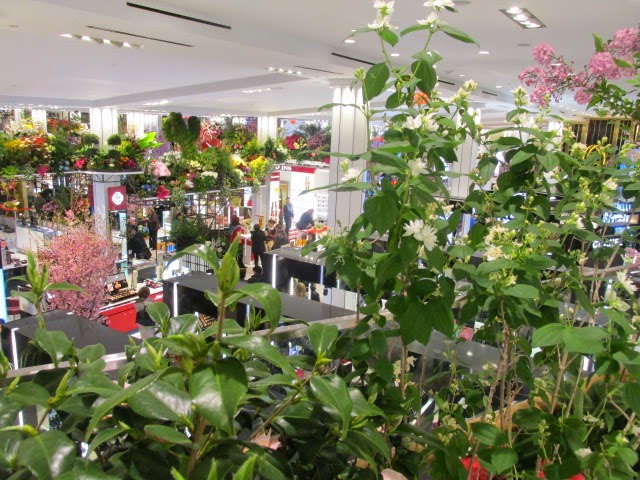 And I just love how irresistible the plants are to people – it’s positively magnetic.
Plants are exotic and otherworldly.
Plants create an intimate experience - whether at Macy’s or the botanic gardens – visitors get right up close and take a picture, or reach out and touch the plants. 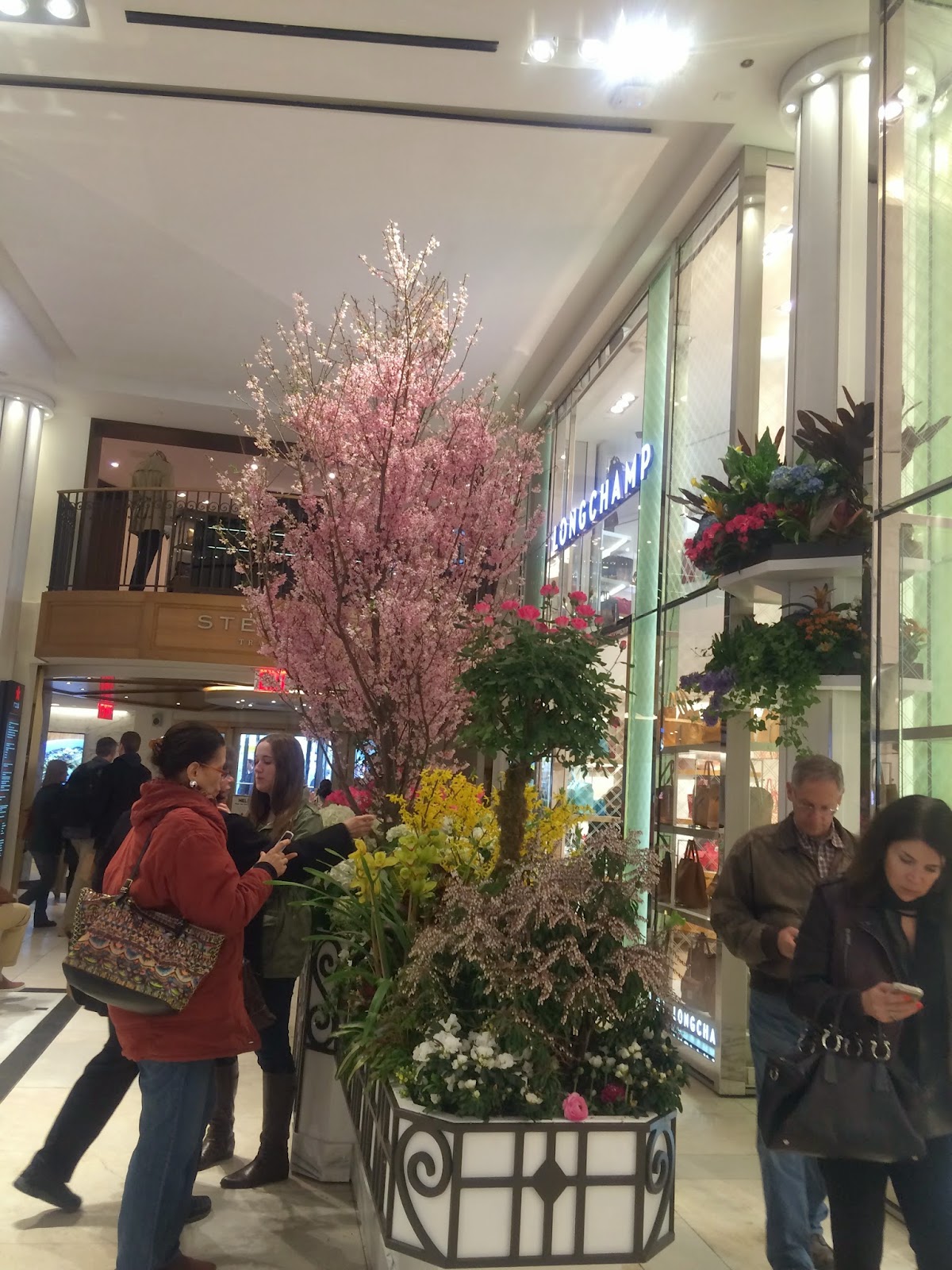 Which brings up the care and maintenance.
Every night, Long Island’s Ireland Gannon nursery waters the potted plants and change out the wilted cut flowers.
According to Macy’s the controlled air in the store makes keeping the flowers happy a very big job.
Following the show’s conclusion, the retailer spreads the botanic bounty to further beautify Gotham. The cut flowers are composted and the living potted plants are donated to Bette Midler’s NY Restoration Project. www.nyrp.org

Not surprising, the most popular floral composition was Lady in Red, according to Macy’s.
And believe me, Nancy Reagan has nothing on this dame! 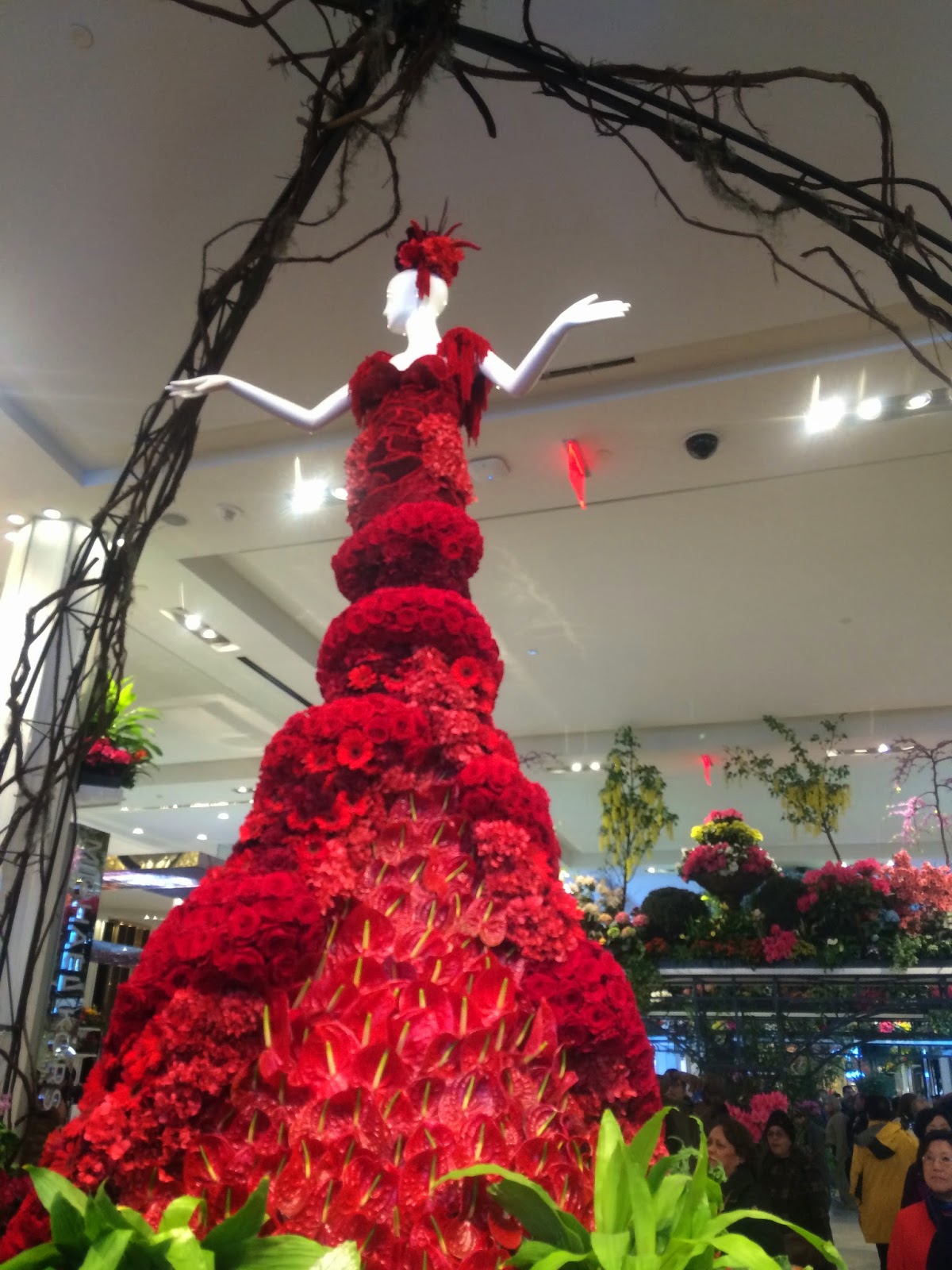 Located at the 35th street entrance, the statuesque stunner was a towering 14 feet tall, her gown made from more than 2,000 flowers.
Roses anthurium, gerbera daises, cockscomb, and hydrangeas were artfully arranged to create a red dress and model that no Fashion Week designer could compete with. 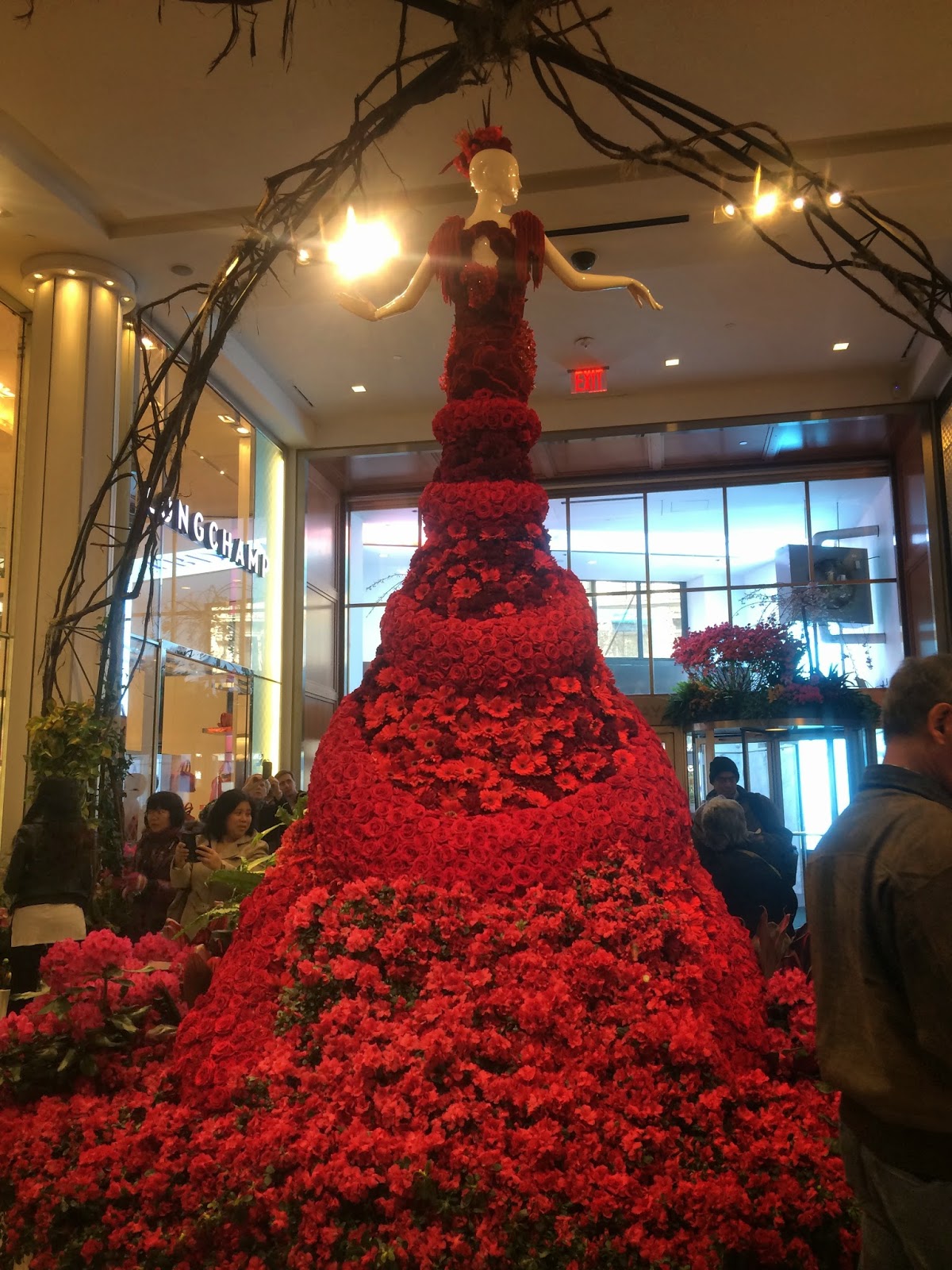 The bottom of the dress was potted plants and the bodice and head were cut, tubed flowers that Gannon nursery traded out and refreshed every night.

The red color and size was one-two punch of unadulterated Flower Power.

With flowers and plants beckoning at every turn, you can’t help but feel like you’ve stepped into a head-spinning Arcadian dream.
To better make sense of all the floral displays and not overlook anything, Macy’s offered guided tours every 30 minutes.

My tour guide told me the tours start off with a few folks and then like a kind of Pied Piper Petunia with a microphone, draws in people – like a honeybee to pollen – so that the tour ends up with 40 to 50 people who’ve joined the group by mid-point.

Our guide was friendly and eager, pointing out plants we probably would’ve missed, such as the “rare” (according to the guide) citrus tree he said was from the Philippines and is used to make a delicious homegrown marmalade there. I’ve since learned that the calamondin orange home is China. 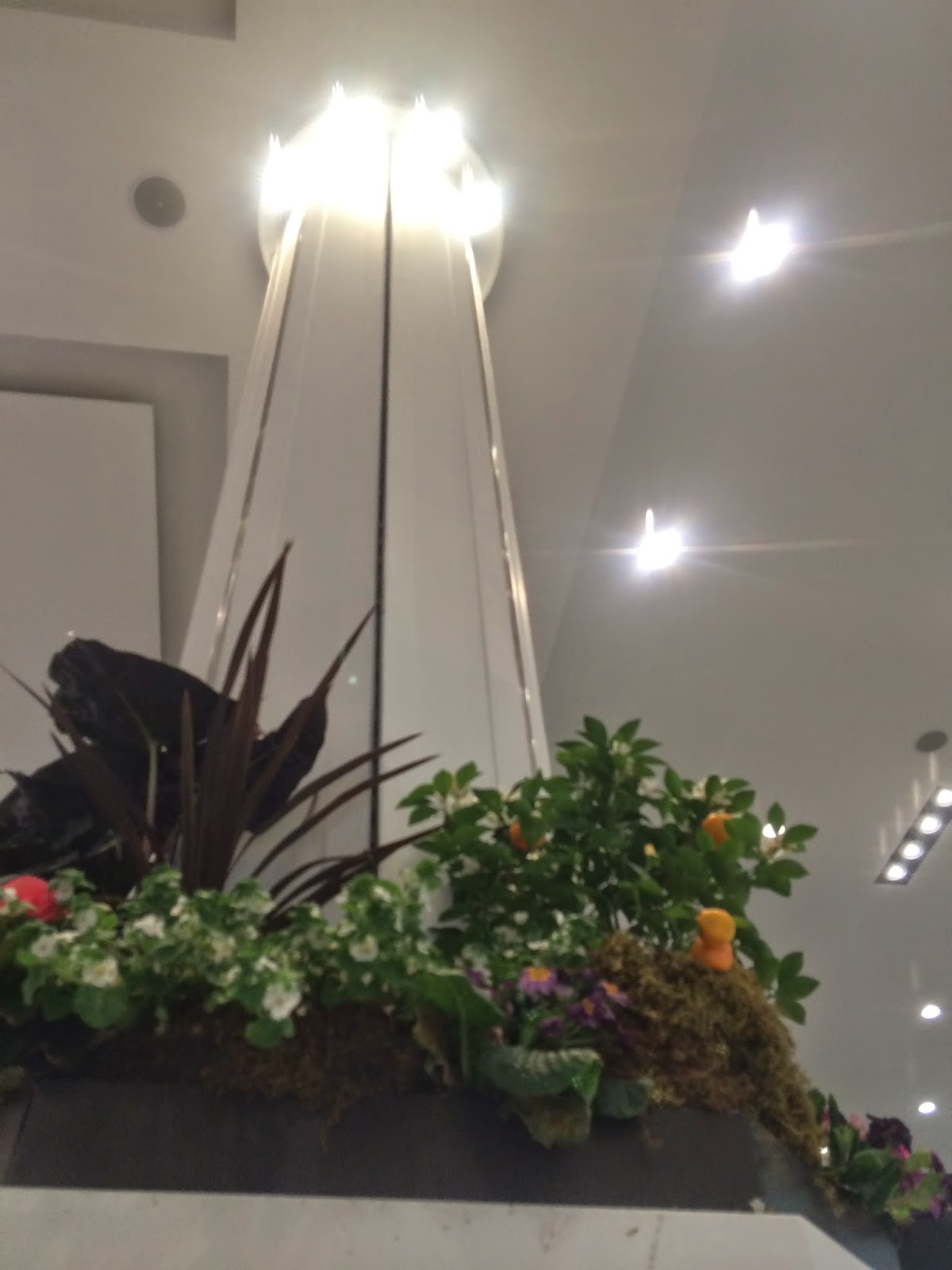 Next to that, high up on a garden bridge, was a pretty flowering almond plant.

In the Garden of the Mind, the tour guide pointed to a conifer and then mischievously asks, “Does anyone know what juniper is used in?”
No takers.
OK. For me, it was a kind of momentary “Floral Flashback” - a scene reminiscent of my conifer ID class on the grounds of the New York Botanical Garden (www.nybg.org) with instructor Mike Ruggerio asking the same question with what I remember as the same mirthful “I’ve got a secret” grin.
The suspense is killing the apparently teetotalling group. I snap out of my juniper reverie.
“Gin.” I finally say.
Everyone breaks out in “naughty but nice” giggles.
And they make me feel like I’ve won the lottery.
They crown me “plant duchess,” I guess, because just then the woman next to me “tests” our combined plant knowledge and asks what’s that one, pointing to a plant in the center aisle garden bed.
I wait for the tour guide.  He’s stumped on this, apologizing profusely.
“Cycad” I offer.
This leads to a brief discussion of the cycad, it being a part of the pine tree family and having worn the mantle of the oldest plant on earth – that is - until the Wollemi Pine was recently discovered by plant hunters led by David Noble in an inaccessible part of the New South Wales part of Wollemi National Park. “Descendants of an ancient line of conifers that had been thought extinct for millions of years.” Botanists matched it up and confirmed it was something they had seen previously only in fossil records.”
I love plant stories, don’t you? 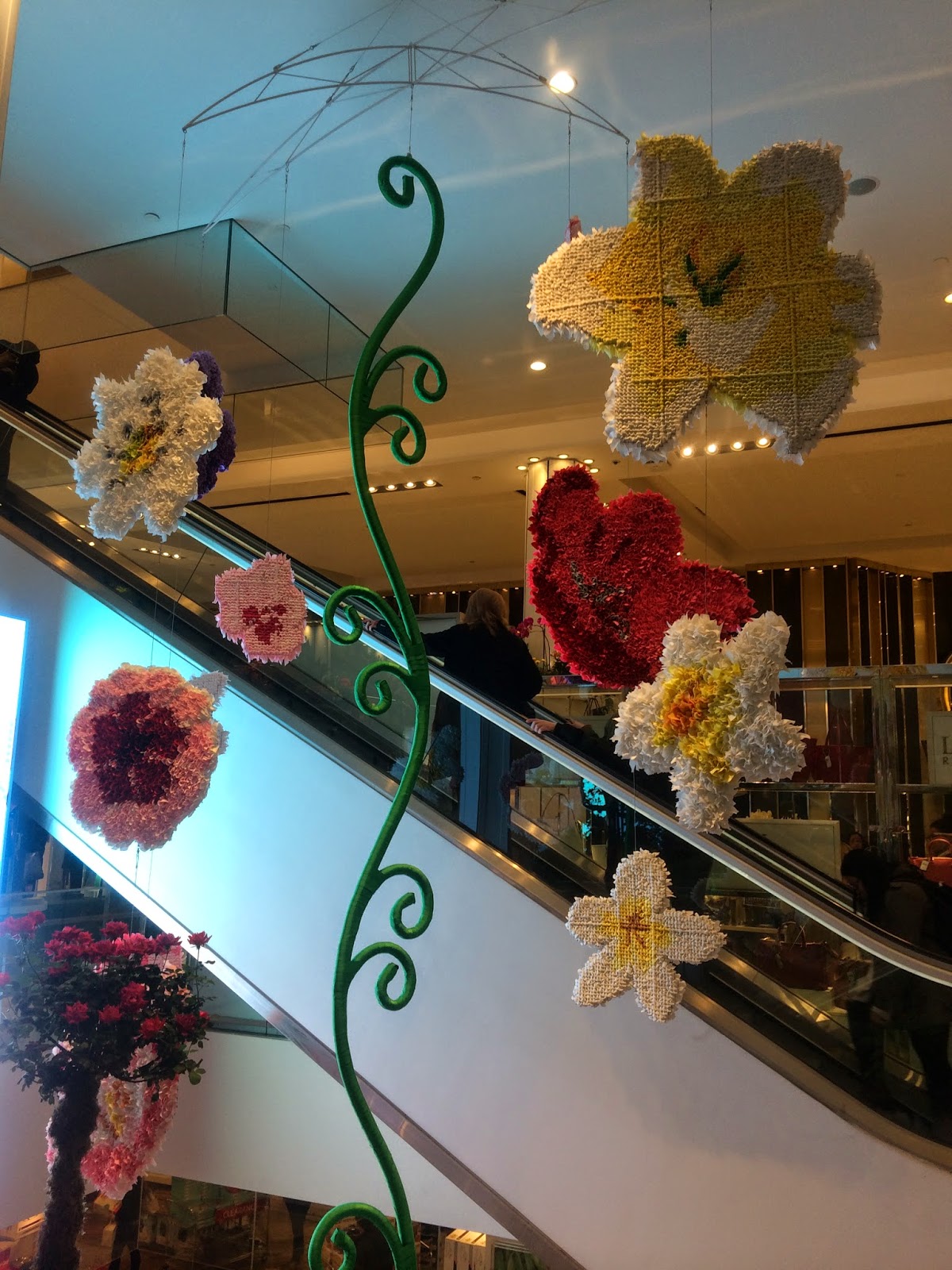 With obvious craft-making pride, the guide recounts how he helped make the giant blooms. “We used ribbons (rather than Jeffery’s signature paper) – 75,000 ribbons that we pushed through the ½” screen frames.”
One side looked like tapestry and the other side was a neat, Scrunchy-like effect.

The blooming mobile also featured giant scrollwork.  This in turn, made the Macy’s folks scurry to bring out their signature, Victorian gates from its inventory stored in their vault.  (Love to explore the vault, wouldn’t you?)

The guide explained how the retailer hadn’t used the gates for years.
I see that the gates are also featured on the Secret Garden brochure. 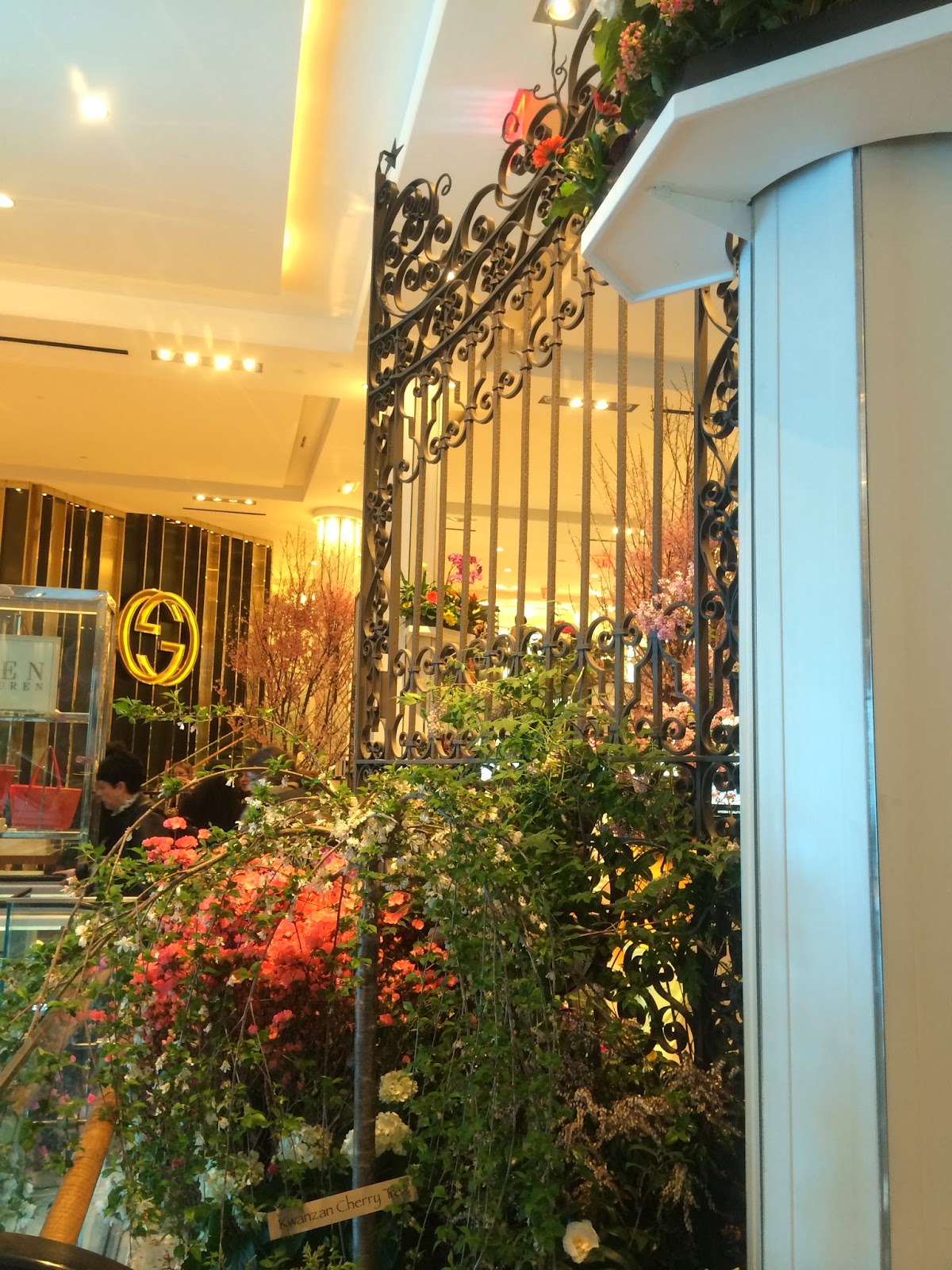 I’d leave these gates on display. They are gorgeous and obviously possess an enduring pedigree.

The Pepperidge Farm® Goldfish® Garden for Kids was mentioned as a garden to visit. I didn’t visit the garden but it sounded cute: “Finn & Friends’ fish Finn was the theme, with the fish and Goldfish brand crackers sharing values (!) of optimism, goodness, confidence, playfulness and imagination."  Whew! Think of that next time you want some crackers in your soup.  Ha. However, if the sponsorship allowed kids to explore the “Great Outdoors” I don’t care a whit about whether the brand alignment is a wet noodle or a crispy cracker.

Throughout the duration of the show, Macy’s hosted designers including Kate Spade, Marchesa, and Lennox, to introduce their stunning new spring dinnerware patterns. 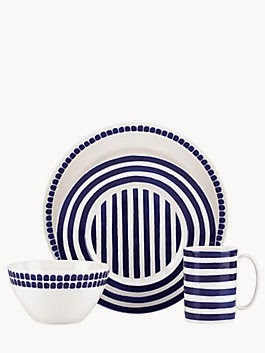 I adore Marchesa’s fashions and her line of plates is inspired by her bridal gowns’ “lush, lacy detailing.” The Midnight Blue line pattern is “bold florals in a dramatic dark color palette, set against gleaming white.” http://www1.macys.com/shop/product/marchesa-dinnerware-midnight-blue-collection?ID=1121642 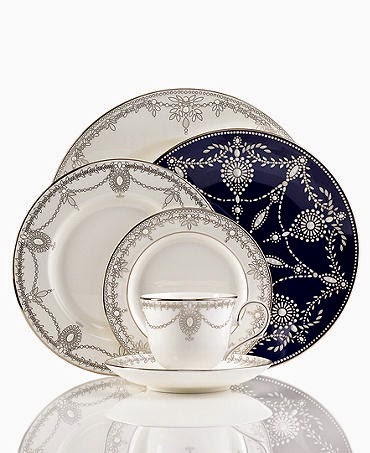 I’m very partial to the Oscar de la Renta line of botanical dinnerware available as a “new, limited-edition home collection at The New York Botanical Garden.  The fashion designer is “an avid gardener and floral expert,” and was allowed to handpick the images from the NYBG LuEsther T. Mertz Library’s Rare Book Collection for his home collection http://nybgshop.org/index.php Gorgeous botanical artwork of greens and pinks and lush florals of peony, mayapple leaves create a happy and elegant tablescape. 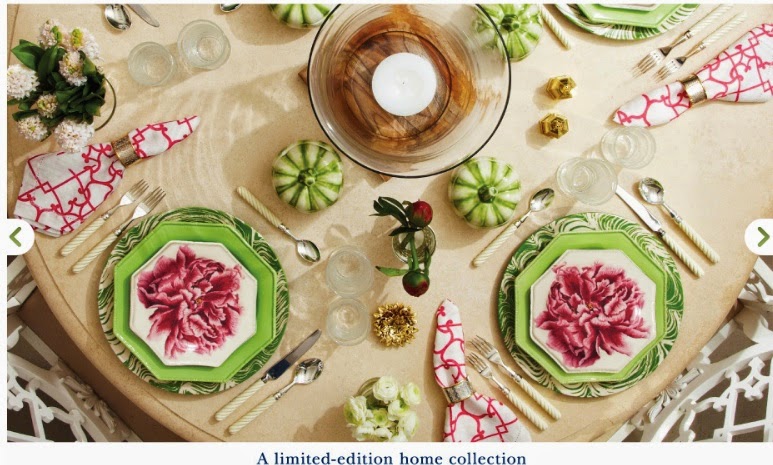 I will be at the Garden Friday to visit the Orchid show, accompanied by my mother and a dear garden client and friend, Maria, so we will check out these beauties, along with the orchids. 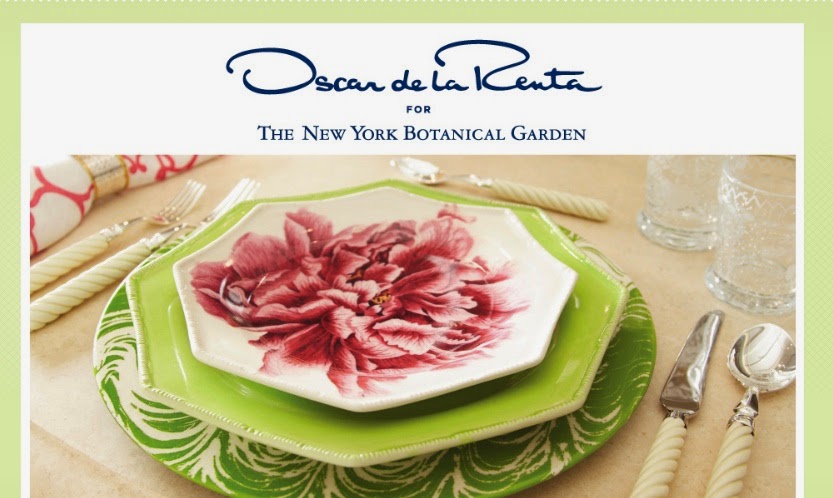 While looking for Jeffrey’s Flower book, I ran into a Tablescapes demo by Barbara K – founder of Tools for Women DIY setting up for a session. 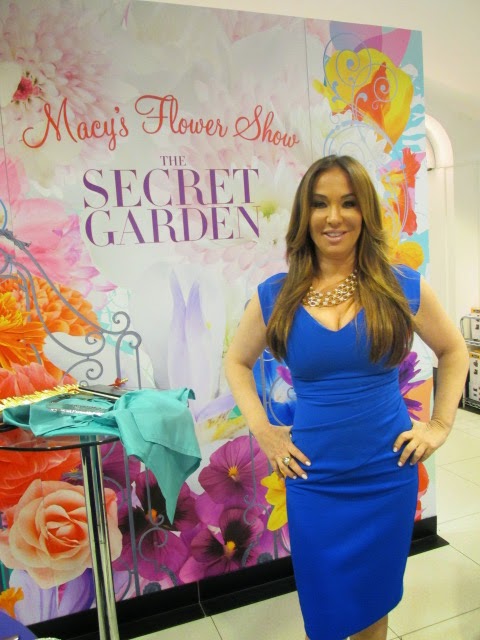 I met her previously at a Gift Show – so it was nice to see her again and learn how she continues to extend her business and brand.  “It’s all about DIY,” she peeped with a dare-you-to-argue kind of stare.
I’m all for the makers so no argument from me.

She and her team were poetry in motion, creating three home entertainment tablescape compositions:
summer picnic, 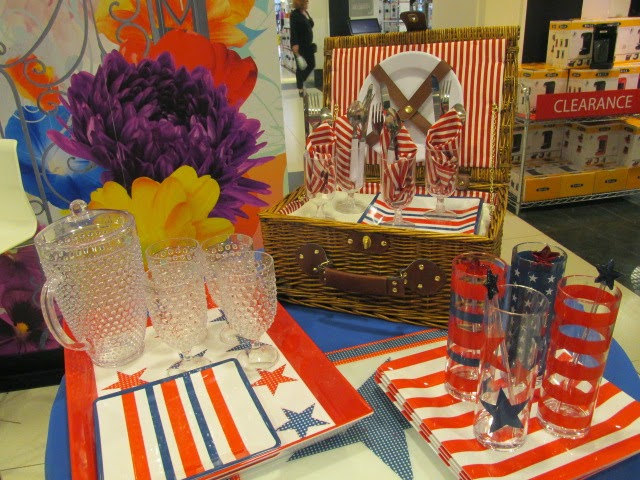 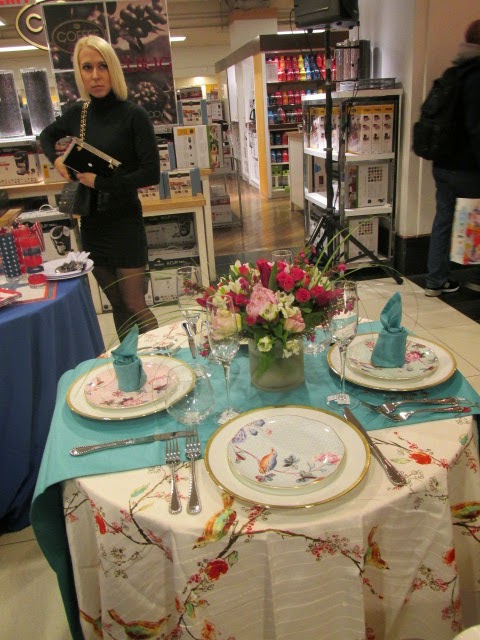 and date night.
“I want to inspire people and take the mystery out of creating a tablescape experience,” said Barbara K.

I’d leave the mystery in. But I got her point.  Let your imagination and creativity soar. Don’t be afraid.
Make your tabletop a fantasy.
The French have a saying when referring to the plated meal: “The eyes eat first.”

Speaking of the French and their ready reference to all things amour (now, that’s brand alignment!) Barbara K stops, framed card for the date table and marker pen in mid-air, to ask what to write on the display card: “I love you? or Will you marry me?”
I suggest the latter.  In a time when everyone seems to Love everything, the notion of marriage sounds more nuanced, more meaningful and yes, filled with "mystery.”

Tell your story with flowers and plants. 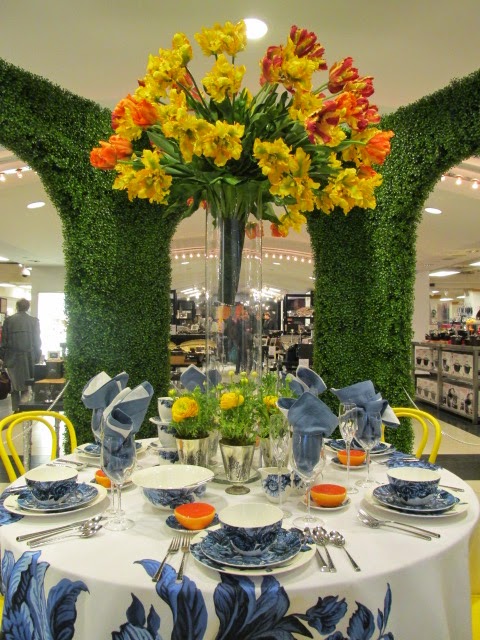 When you visit the Macy’s Secret Garden web site – you can send me a glamorous Petal Gram!
http://social.macys.com/flowershow/#/petalgram 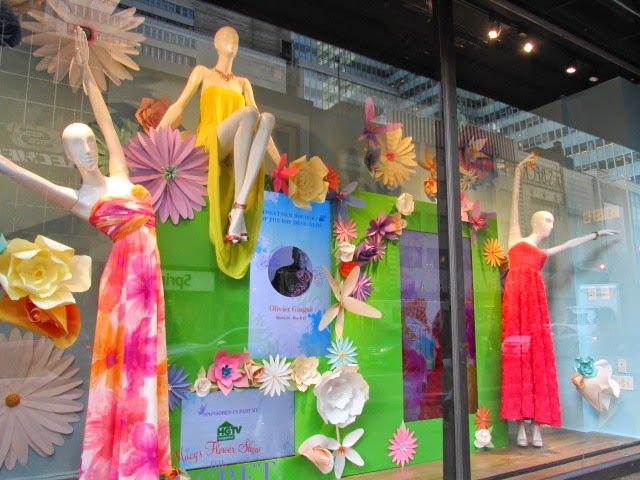 Posted by Garden Glamour at 3:29 PM