A Night in Gotham: NYBG Garden Lecture and The Mayor's Awards for Arts & Culture

The final lecture in the 2010 New York Botanical Garden’s (NYBG) Landscape Design Portfolio Series was held Monday, November 8th and featured Kate Orff.
As described by NYBG literature, “Harvard Graduate School of Design alumna Kate Orff is the founder of the award-winning studio SCAPE. With a background in Political and Social Thought from the University of Virginia, and intensive training in ecology and the fine arts, her approach to the landscape merges strong form with community-based and participatory-change models.” 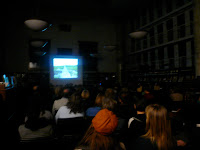 Sounds fancy, but Orff talked a lot about relevant topics like urban biodiversity as it relates to her firm’s projects: Oyster-tecture, Safari 7, Bird Safe Design Guidelines, and the 170-acre Blue Wall Environmental Center.
She is creative.  She even coins her own words.  Dr. Seuss-like.
There is the charming and disarming “Flupsificastion” for starters.
She is witty and urban.  And scrappy.
I loved her "start small with gardeners" approach to harness the power of the landscape strategy.
"Start small and with what you know," she advised.
She jokingly said she starts her projects with a Bake Sale!


She described the Big Fuzzy Rope catalyst for one project. 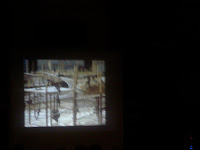 
She referred to oysters as “My obsession.”
By way of explanation, she said she is from Annapolis originally and her sister works on waterway preservation there.
She employs the fascinating oysters to helping her clean up the Gowanus waterway.
In addition to working with oysters, she also cited the workhorse grasses and mussels.
See how brilliant this is?
Orff works WITH nature to build sustainable environments. She partners with them. She does not impose a man-made solution. 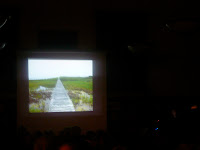 I loved all her passion for the oyster.
She said she is inspired by oyster life!  (Gotta get one of the “I Oyster NY” or Oysters Working t-shirts, she talked about.)
I love savoring the taste of oysters, of course. But I also am fascinated by its place in history – and Orff showed an early version of today's ubiquitous, twittering food trucks.
These street vendors offered local oysters  -- if only today… sigh.
She too lamented our lost connection to local food…
While the history and culture of the oyster is utterly fascinating, it’s the cleansing powers of the oyster that would bust a Mr. Clean any day.
She also described in practical, conversational style her dedication to solving landscape problems such as pollution that is exacerbated by storm surges in the Gowanus Canal.
I think her most bootstrapped and successful project is Safari 7.
She conceived of the program to provide a tour of New York’s wildlife on and via public transportation. Specifically, the #7 subway line that takes passengers out to Queens.
She worked with New York City’s Mass Transit to produce a Safari 7 Metro Card (which can’t be easy given all the problems with MTA) and she secured mass transit ads through Arts for Transit.  (Yeah for Mayor Bloomberg.  And see following story below)
“I wanted this to be a student ‘Gorilla Project," she said.  Meaning no big, long lead-time effort. Rather a fast track to success ^:^
The #7 subway line was chosen as it encompasses a diverse population and topography.
She described the mapping, social networking experience of this project.
What vision and fun!
And I was thrilled to learn how she was able to produce onsite tours of the landscape featuring such scientific luminaries as Dr. Steven Handel!
http://safari7.org/dr-steven-handel-gives-a-weed-talk/
How lucky are the tour guests to have Dr. Handel, world-class scientist, as their guide
I was lucky enough to collaborate with him and Dr. Clements on ecology and environmental projects in the past. Geniuses both.
But before I got to the NYBG lecture, and this being New York, I was a bit oversubscribed for the evening.
There were two events I wanted and “needed” to attend this night.
First up on the evening’s schedule, following early morning garden design work in the blustery, rainy, early-hello-autumn weather – was the annual New York City Mayor’s Awards for Arts and Culture.
The awards “honor individuals and organizations that have made significant contributions to the cultural life of New York City” according to the program.  What I didn’t know is that the awards were “presented almost annually until 1994… and the Bloomberg administration revived the tradition in 2004.”
I was so honored to have attended the 2005 ceremony at Gracie Mansion to support our Botanic Garden president, Judy Zuk, who was an Awards recipient in 2005.
Judy, we miss you….

This year’s event was held at the recently refurbished and elegantly designed Alice Tully Hall in New York City’s Lincoln Center.  All glass facade captures and reflects the glittering lights of the city.  Here the tables were already dressed for the celebratory cocktails to follow the Awards Ceremony topped by row upon row of glasses, waiting. 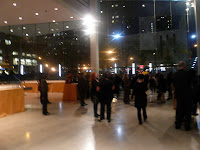 The ceremony was held in the theater and the stage was dramatically designed. 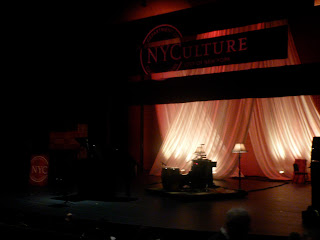 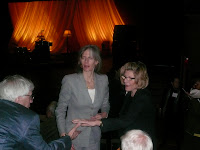 As I was myopically looking for a seat and before things got under way, I got the chance opportunity to meet up with Marilyn Gelber, one of the award recipients.  I also saw Kate Levin, New York City's Commissioner of the Department of Cultural Affairs.


The event launched with the voice of Alec Baldwin – very god-like.  There was that unmistakable wry, sardonic humor that I love.
But just voice, no Alec in the physical form.  sigh...

The event was hosted by the Mayor, naturally.
Co-hosting with Michael Bloomberg was Meryl Streep.  (and a fellow drama student of my sister’s at Vassar.)  And more than once she and the Mayor referred to her Garden State’s Bernardsville roots.
But this night was dedicated to celebrating New York.
Meryl highlighted her Mother’s home in Flatbush, Brooklyn.
This was a segue for the first honoree, Marilyn Gelber, Executive Director of the Brooklyn Community Foundation.   I know Marilyn and she is a tireless supporter of the borough and the community.  In fact, when I congratulated her before the ceremony, she humbly smiled and said, “It’s great for Brooklyn, isn’t it?”
Very classy. 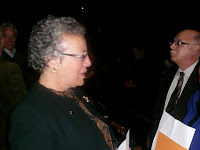 I very much came to the event in order to honor Bill Cunningham, New York Times photojournalist. 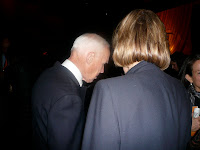 As shy and unassuming as Mr. Cunningham is in his work covering events for The New York Times in New York City (and the Garden State and Long Island, too) for the last 30-plus years he was surprisingly delightful and chatty this night!
He is known for riding his bike to the events despite his age, and when the Mayor called his name at the Awards ceremony,  he practically bounded on stage, camera around his neck.
He playfully aimed his lens at Meryl and the Mayor before taking his place for the photo opp and then behind the podium.
He is utterly charming.  He exuberantly lauded the Mayor and his tireless support for the arts and cultural events, noting he sees Mr. Bloomberg at the high ticket and small community events alike.
Mr. Cunningham enthusiastically gushed about the vibrancy of New York’s cultural scene.
He said that when he heard the stats or Superlatives ticked off by the Mayor at the start of the night: (NYC has more than 1,200 cultural institutions that host hundreds of special events every year; Arts and Culture is a $6 billion industry); he was astounded.
And remarked that he doesn’t get to even half of the events!
Mr. Cunningham praised all the people who helped support the arts and culture at all the events he photographs -- “The people who give of themselves so that all these places can exist.”
He said he loved taking photographs of New York women. “They are marvelous.”
He also explained that unlike other places where people dress for work and then drive to the job or the day’s calling, in New York, it’s a street show for all to see and enjoy!
Displaying an animated, utter delight, he claimed “It’s what gets my adrenaline running!”
Clearly, this is a man who loves his job – and life.
He reminded us how lucky we are to live here in New York City – and in America.

He also claims he is just the “messenger.”
However, those of us who have been blessed and lucky enough to capture Bill’s eye and be a featured photo in his pictorial essays about life in New York where art, culture, and fashion collide, would counter that while he might be a messenger, it’s more like an angel-as-messenger sent to deliver a gift.
It is without doubt, a high point of life for those selected.  I know.  I speak from experience about this.
And in no small part, it’s because of the utter, guileless charm of the angelic messenger.
It’s all so unexpected.  As Mr. Cunningham explained, it’s not a celebrity or society page in the New York Times.  It’s all about everyday life in our vibrant city.  I think that’s what makes it so special… It’s that feeling that this is New York and anything can happen here – at any moment. Everything is possible…
And for me, even though there were other awardees, it was time to scoot to the next event.  My chariot waited.  Well, it was really the #1 subway to Times Square, but I was in the bubble ^:^

Posted by Garden Glamour at 8:06 PM