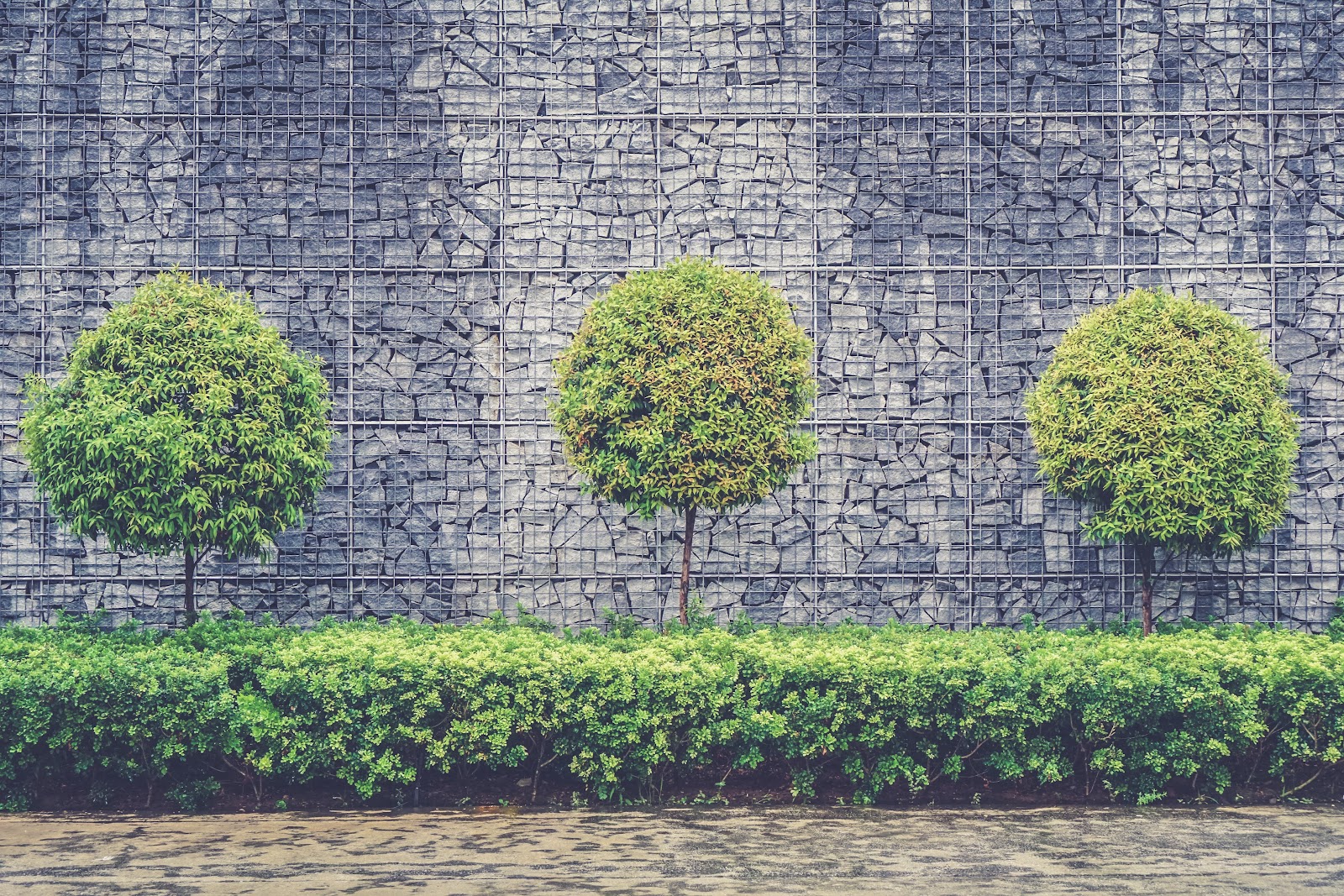 Under the rubric where the “cobbler’s kids have no shoes,” it’s a miracle that our own country house home garden is as beautiful as it is…

But just like my clients, my husband and I have to be mindful of budget and schedules. Plus, there never seems to be enough time after working in my clients’ gardens. You get the idea.

We usually take on one or two “garden rooms” to produce each summer season. (And phew - almost completed all my garden dream rooms throughout the property).

Our garden rooms include the Water Garden, the Ladies Border, the Red Arbor, St. Francis Rock Garden, the Farmette, the Shower Garden, the Orchard -- and more… We’ve been featured on House & Garden tours and will appear next month in NJ Monthly Magazine.

This year, we agreed the focused project would be the driveway. My goal is to take up the paving (bad chemicals, non-permeable, ugly) to a more permeable, and more garden-inspired design. More on that soon as we begin the work.

The start of the driveway work was displaced by the need to rip out and replace what is the border in our backyard.

Let me set the stage and put this into context.

Our front and side yards are where the designed, sculpted gardens are. The back yard looks out with an 180 degree water views from Sandy Hook National Seashore to the South Shore of Long Island and the Rockaways to Brooklyn (love seeing the ferris wheel at Coney Island lit up on summer nights) to Manhattan’s “castles in the sky” to Staten Island.

There is no need to create a visual competition with gardens. Outside of the edible garden “farmette” and the mini orchard -- it’s a bird’s eye view.

However, there is a lot of trash plants growing on the hill there. We’re at the highest point on the East Coast and the properties go from yards to impenetrable pseudo-forest of tangled invasive plants including sumac, honeysuckle, invasive cherry tree and vines, and Porcelain Berry  - Ampelopsis brevipedunculata (here plus full list of Garden State invasives).

While for the most part these “plant thugs are out of site descending as they do down the hill, there was a series of them, layered, and covered with the god-awful, invasive Chinese Honeysuckle, Lonicera maackii.

Sure it smells nice - for about a nanosecond - but you’re left with ugly, branches and a fighter who won’t budge.

Furthermore, according to the New York Botanical Garden’s (NYBG) “Mistaken Identity” scientific paper on Invasive Plants and their Native Look-Alikes, “Wherever invasive honeysuckle shrubs displace our native forest species there is a huge potential impact on these migrating bird populations due to the reduction in availability of native food sources.” 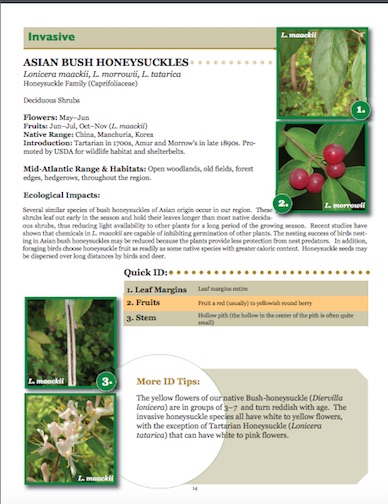 If you really want honeysuckle - please plant our Native alternative to the Asian honeysuckle. There are various types of trumpet honeysuckle Lonicera sempervirens from which to choose. 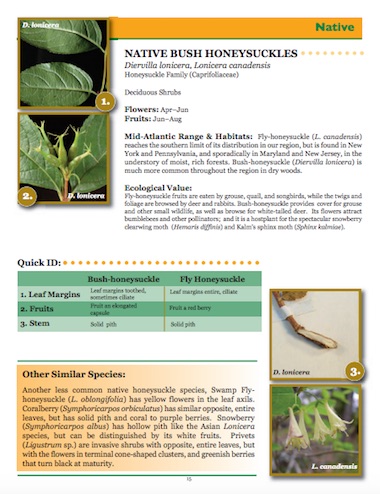 If all that wasn't bad enough, what really prompted me - dare I say drove me - to rip out these plant thugs was that earlier in the spring, as Bill and I were enjoying our evening garden walk with our cocktails, a deer head just beyond the border -- a young buck - was perusing the yard from behind the “border hedge” we’d created - looking for all the world like that neighbor character from the Tim Allen Show where all you saw was a nose and eyes above the fence. Young “Buckie” was not to be deterred despite a slingshot and me charging him. Harummphh. He jumped out!

I shrieked. Not because of the cloven-hooved satan, or big rat that he is was now in my world - but because my garden was not designed with deer in mind. We’ve lived here 20 years and nary a fawn has been seen. In a flash, I saw all the years of designing, planting, and luxuriating in the glory of our gardens go up in smoke.

We learned there was building going on up the hill; probably forcing them out of that habitat to seek yet more food.

Please know that deer are now rutting two times a year vs. one.  Many are giving birth to twins and triplets as a result of their fattened state.  There are more deer now than when the settlers first landed on these shores. And where there’s deer, there’s the mice and the dreaded ticks.

Please people, do NOT feed these predators. I just read where a local homeowner was allowing this tick-infested Bambi to swim in her pool!  We need to work as a community to rid our neighborhoods of these admittedly cute creatures (oh why did Disney ever produce Bambi?) and see them for the enablers that they are.

Not too long ago, I saw this at an extended family's residence in Hunterdon County.  This is not pretty.

Deer and Ticks and Mice; a most unwanted Menage à Trois fueled by -- Acorns!
Bear with me - there’s a connection to the heading….

Some of my garden design clients do, of course, have deer in their yards -- some of the properties are in fact, in the middle of what I call, “deer highways!” But I have incorporated that element into the overall garden design and plant choices. We’re meeting the enemy head on and with eyes open.

I immediately researched the deer and tick and mice situation near us. The news was grim. According to NorthJersey.com, “Oak trees go through a boom-and-bust cycle with acorn production, and 2015 was a boom year in the Northeast. With a plentiful food source that can be stored over the winter, the mouse population often swells the following year. We saw the acorns in 2015 and then we saw a plague of mice in 2016.”

The text bubble in my head was saying, “I love nature’s symbiosis and the natural food chain but please not with all these nasty elements….” And honeysuckle interrupts the food chain, I read. Not unsurprisingly.

Further, this year, there is a “new” dangerous tick-borne disease called the Powassan virus that is carried by the same tick that transmits Lyme Disease. Double the problem…I’m also figuring that none of these circumstances are helped by climate chaos -- because the winters are not cold long enough to kill off those critters and plants that would normally die off.  As a result, we now spray our clothes with tick repellent.  This one is good and lasts for five to six washings.

Far too many of the good horticulturists I work with have this growing Lyme plague -- that is woefully misdiagnosed and treated far too often almost as an afterthought. “It’ll cripple the health care system,” is what one of my stricken hort men told me who has been battling the crushing Lymes for years.

Then, I read that deer just love to canoodle in the honeysuckle - which means essentially that our “border hedge” could become a love nest for Mr. & Mrs. Buckie Deer.

Not on my watch!

I found this in my research from 10 Reasons to Remove Honeysuckle:

The presence of Amur Honeysuckle may be increasing the risk of tick-borne diseases, especially in suburban areas where homes are built near woodland edges.

“Invasive bush honeysuckle might be increasing tick-borne disease risk on a pretty large spatial
scale,” says Brian Allan of the University of Illinois. Allan has studied how honeysuckle, deer and ticks interact, and he has learned the shrub attracts deer, and as a result, attracts more ticks. That means people don’t have to go to the woods and prairies to find ticks anymore. The deer are bringing them to us. And it has the effect of concentrating deer in locations where honeysuckle is present, particularly in suburban landscapes. The shrub produces several stems that arch outward, forming a canopy that creates ideal bedding areas for white-tailed deer. “Deer are using the shrubs for shelter,” Allan says. “There’s nothing that really compares to it in terms of native vegetation.” Areas invaded by bush honeysuckle have a higher density of ticks infected with pathogens than areas of native vegetation.

Deer ticks are the main carrier of Lyme disease. “Deer are a food source for adult ticks and a transport mechanism,” says Linn Haramis, entomologist from the Illinois Department of Public Health.Thank you, Chris McCullough, President, Greater Cincinnati Chapter Wild Ones cincywildones@fuse.net

That was more than enough for me. No canoodling in our yard!

Soooo - the back border hedge got moved up to the number one position.

Garden Border Hedge
We needed a hedge that could stand up to a true “cat walk” and other animal species, including raccoons and groundhogs, one that would be deer resistant, in case these deer ever do return, evergreen, and good looking. A tall order you say. Indeed. While I might prefer boxwood, it too has issues of late; moreover it was too expensive for our budget at this time.

So after research and input from several of my best local nurseries, I determined to plant the Ilex ‘Compacta’ holly - Aquifoliaceae Genus: Ilex Species: crenata Cultivar: 'Compacta'

It will grow four to five feet high and wide. It’s evergreen. It looks like boxwood.

I needed 25 of the Ilex to cover the border area and Scott and his son, Mike, from Coastal Nursery - one of the best in the Garden State and family run and owned - came through.

And while not inexpensive - it was doable.

The Six Degrees of Hell
And yet, therein lies the trauma of beating back the satanic invasives. Face it folks. We all need to deal with them one way or another. 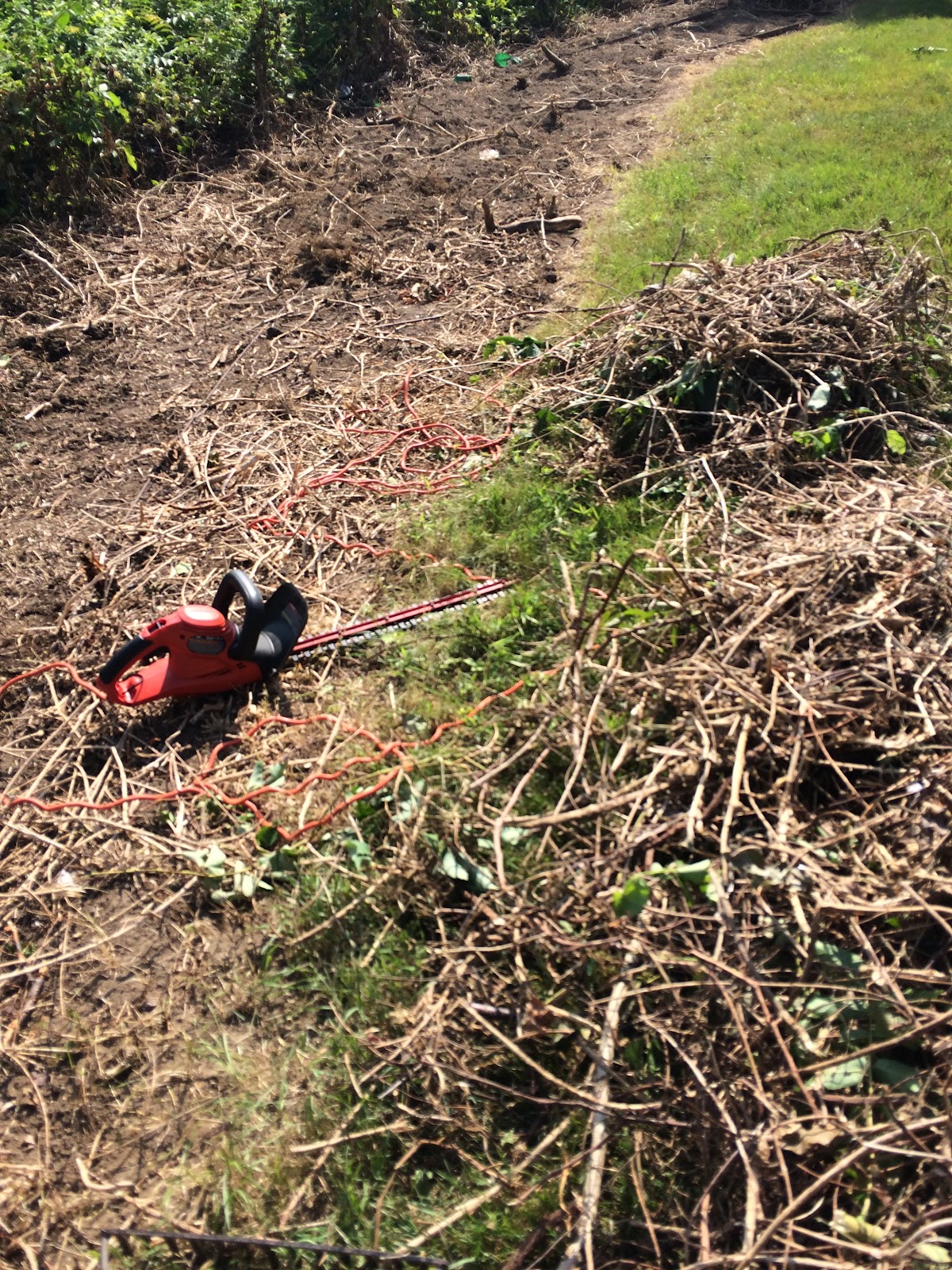 It was a week of cutting back the invasives; finding the original border (with metal edging!) and cutting, clearing, hacking … You get the idea. It’s horrible. These invasives have survived because they are so strong -- which only means one cannot easily rid them from the landscape.

We gardeners are hopeful and optimistic folk. We are steadfast. Our forefathers had to hack away to make way for agriculture. Those thoughts kept me going.

It was horrible. Did I just say that?! 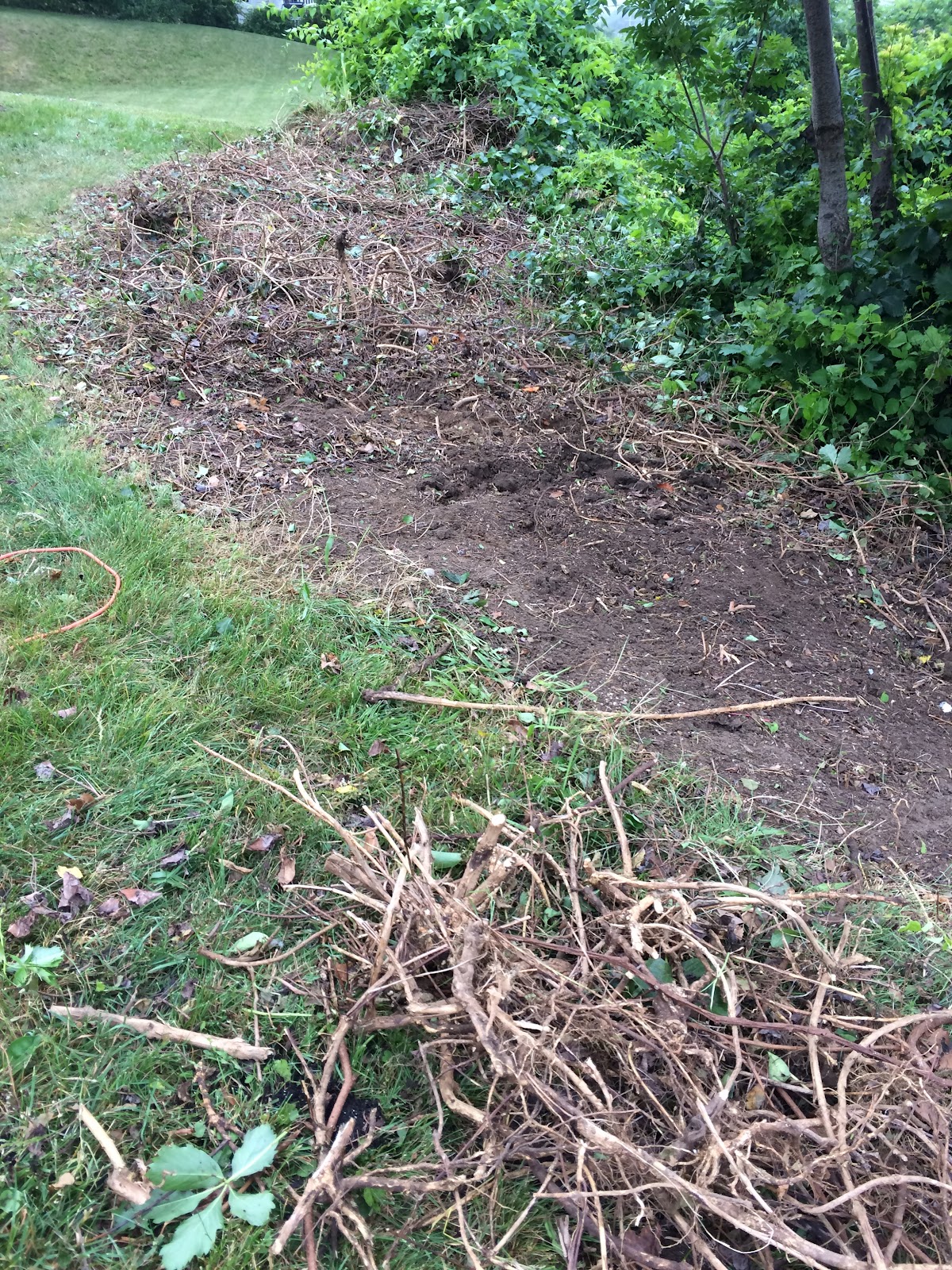 Finally, with help from my Duchess Designs team - especially Darin, the Master Gardener, Bill, me - and a lot of dedicated hope for a better, healthier yard -- we’re looking at the upside of a sustainable, clean, garden design. I know we will need to be vigilant to keep the plant thugs at bay.

We’ll plant/sow turf outside of the newly created steel borders. But it’s a good start and a world away from what was. 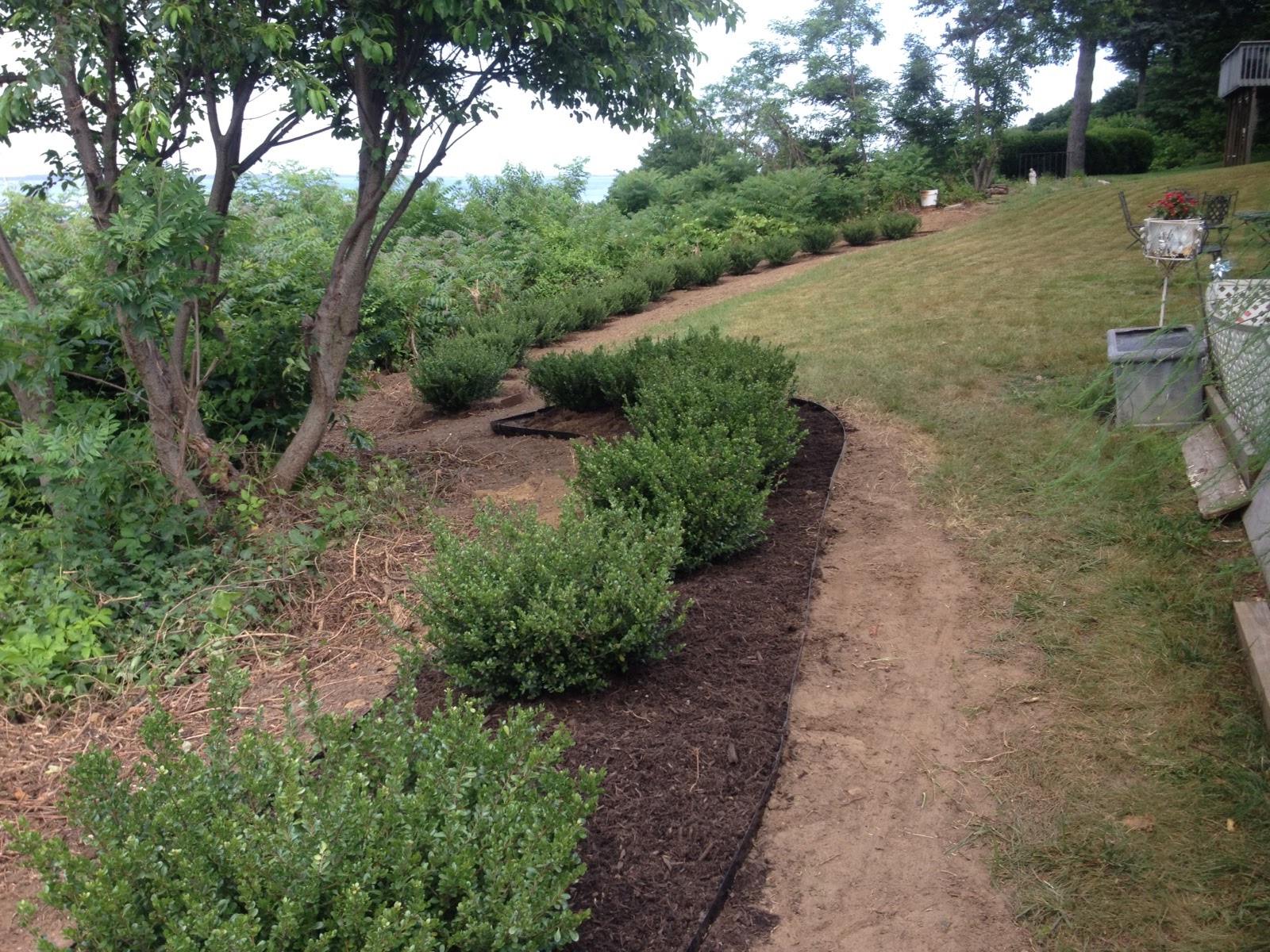 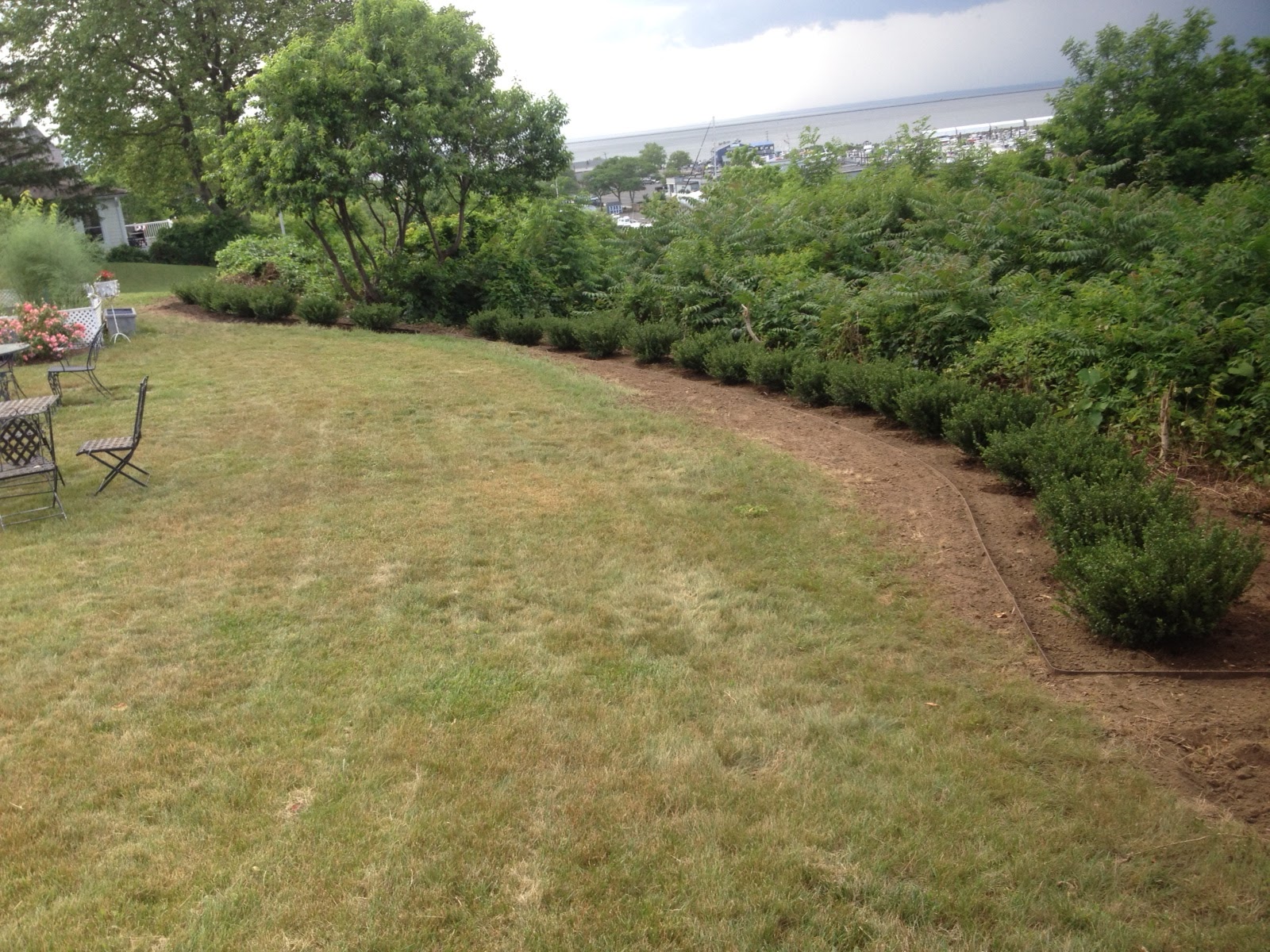 Please share your experiences to thwart the thugs and to enjoy true garden glamour.

Email ThisBlogThis!Share to TwitterShare to FacebookShare to Pinterest
Labels: #deer #ticks in the garden, #Design a #deer-proof #hedge, #gardendesign border to stop deer and invasive plants, How to rid the garden of #invasive #plants, How to thwart #Lymes in the #garden