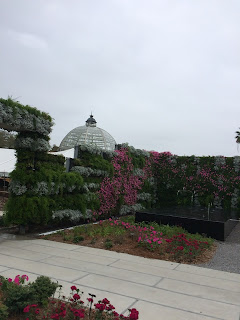 My first surprise entering the New Orleans Botanical Garden is that it seems bigger than it is. The public garden is twelve acres with 14 distinct garden rooms. The variety of plants and gardens makes it seem vast. Or maybe it’s the layout. Or the sense of discovery.

The other surprise was to learn that the local citizens don’t frequent the garden more often. Seems a lost opportunity - especially when it’s free on Wednesdays to Louisiana residents …

We found lots to explore.

Near the entrance are fairly new display gardens. There’s a living wall -- that unicorn of garden design (lots of drip emitters helps its success) and a pollinator garden featuring lantanas, sage, horsetail. Fronting that is a black pool with colored LED lights and fountain that we were told makes a very impressive welcome to the Garden’s evening events and a new addition having been completed last fall. 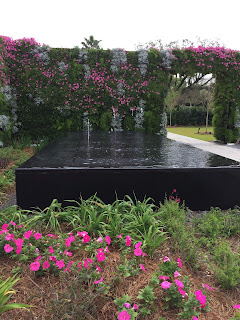 Beyond that, there were many display gardens showcasing the area’s pedigree of gardens, plants, horticulture, and agriculture. Here, there are beds of ornamental and edible plants, many are trialing by local breeders and Louisiana State University (LSU) and Master Gardeners. 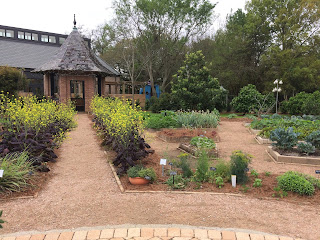 Many of these plants are distributed to landscapers and nurseries to help promote their use and cultivation.

Our guide, the very knowledgeable horticulturist and landscape designer, Taylor Williams whose Plant ID is extraordinary - was the perfect sherpa to lead our botanical garden tour. Taylor is also on the board of the Garden’s Yakumo Nihon Teien Japanese Garden. 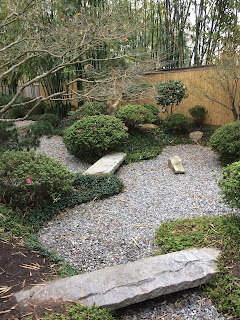 We enjoyed seeing this gem, and learning the history behind the garden: Vaughn Banting, the bonsai master who found the Greater New Orleans Bonsai Society in 1972 and contributed to the pine’s “cloud top” pruning; NOLA’s sister city of Matsue, Japan -- known for it’s stone and who donated the garden’s iconic stone lanterns. Matsue is located on the Sea of Japan and is known as the “City of Water.” This seems a rather cruel irony linking the sister cities post Katrina...

Also, “the garden is named after Lafcadio Hearne/Koizumi Yakumo an exceptional writer who lived in both Matsue and New Orleans.”

My notes say we were introduced to a French Box plant -- it’s a hedge and one can eat it… Taylor said it’s good with red beans and rice. I can’t find a reference to this plant so -- what do you know?

Taylor also told us there’s a common saying among New Orleans gardeners: “A plant grows better if you steal it”

Leaving the Japanese Garden, we were dazzled by the “Yesterday, Today, and Tomorrow” plant. Taylor told us about this Brazilian native, Brunfelsia, that seems as flashy as any Mardi Gras costume! The tropical shrub sports three different colored blossoms that change color from white to purple. What a performance artist! And now I know what those plant thieves must’ve been thinking all along. I want this plant. 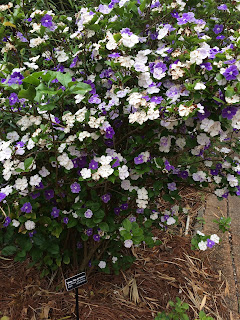 The Southern Shade Garden, we saw lots of Tree Ferns (Cyathea cooperii). I love these delicate majesties. And Sweet Olives.

In the Native Garden -- I always like the Native gardens best -- such distinct and unique plants of a given region. Sadly, we also saw crape myrtles that were suffering from a sooty mold disease. Caution -- watch your crape myrtles - this is not an isolated pathogen issue.

Happier, are the numerous Stag Horn ferns hanging like jewelry from the trees. 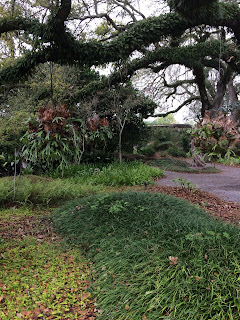 These are a curious and dramatic plant to grow. I used to pride myself on having several of these beauties before we undertook our home renovation and they became a victim of a move.

We also enjoyed a terrific tutorial from Richard Johnson, volunteer, who introduced us to the Louisiana irises there and the fascinating work of horticultural pioneer, Caroline Dorman, that I reported on in the Longue Vue post. Here too, is a cautionary tale -- Johnson says the “collected cultivars” of the iris are threatened. Species habitats are encroached upon… He told us about the early iris plant lovers - those romantics who founded the Irish Society, including Claire Brown, Tyrone Forman, Patrick O’Conner, JK Small, Ira S. Nelson and Audubon.

The Lily Pond and Conservatory are lovely sculpted, or more formal gardens, bordered by roses parterres. 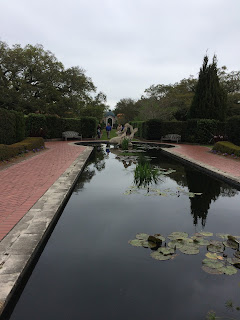 Of course there are many camellias and azaleas. Given “climate chaos” - it’s not surprising that spring came early this year - so many of the blooms were on their way out already. 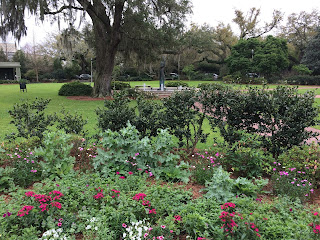 We also saw very pretty spirea -- I shouldn’t overlook this stalwart of so many garden designs. The Fringe Tree, the India Hawthorne, are gorgeous, as are the Weeping Bald Cypress, orange jasmine, and and the dwarf Yaupon -- a nice alternative to boxwood.

On our way out -- we entered the historical, Original WPA Garden. 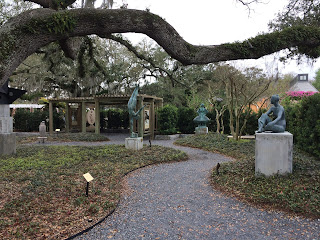 There are a number of sculptures here (with some amount of controversy surrounding this art display) and very big Live Oaks. 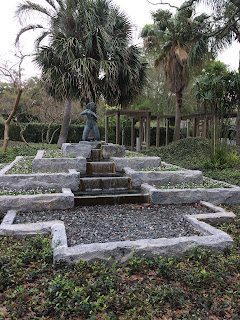 According to the Garden, “The most imposing feature of this room is the impressive 130+ year old Alférez Oak, named for the artist responsible for most of the sculptural elements in the garden,” Enrique Alférez, the Mexican-born Louisiana artist known for his art deco work. 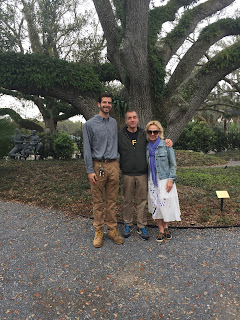 Be sure to visit the New Orleans Botanical Garden -- any time of year. Thank you. Taylor. We enjoyed our garden tour very much. 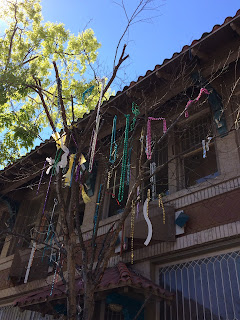 Right across the road is the NOLA Museum and Sculpture Garden that I visited solo the next day. Truth be told, I was dodging a storm in New York, but grateful to have the opportunity to explore more of this gorgeous, delicious, exciting city.

I got to dine at the James Beard Foundation's nominee Herbsaint restaurant. Fantastic! 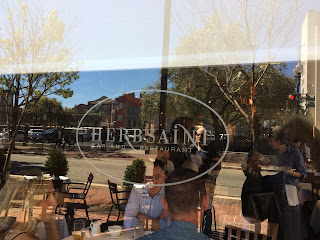 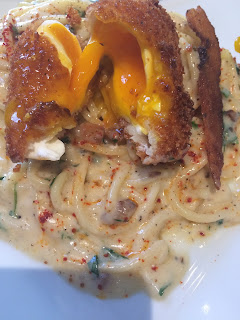 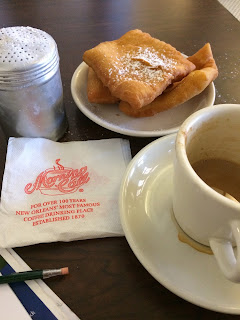 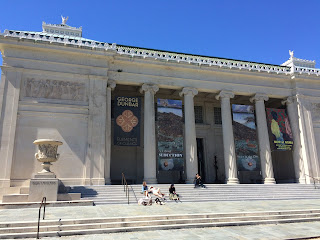 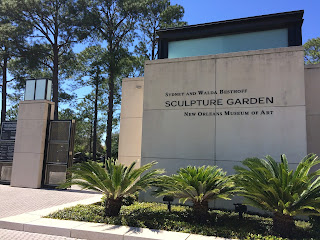 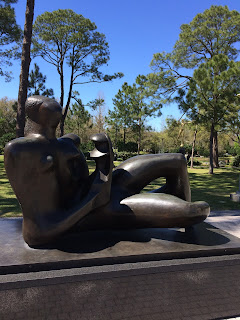 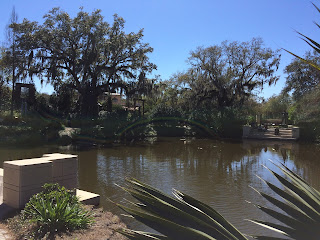 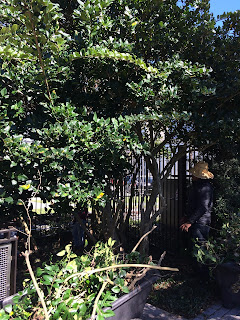