Visit to Cuba is filled with Gardens, Farms, Hemingway, Lessons in Sustainability in the Urban Environment - & Yes, Cigars! 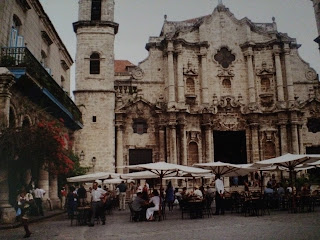 I should have written oh-so-many posts about my visit to Cuba. In light of today’s first official commercial flight in five decades, I figured the confluence of circumstances compelled me to share my Cuban sojourn stories.

I traveled with a small group of around eight, if I remember right, back in 2000. It was at the time not long after Elian was capturing headlines and heartstrings. The focus or theme of the Cuban exploration I joined was sustainable urban farming. Truth is I had been waiting and looking for a way to visit Cuba for as long as I can remember. But I could only do it legally. Besides the fact that I consider myself an American patriot - it's also true that I was - and continue to be fascinated, smitten, and downright mesmerized by countries whose impact and influence on the entire world seems way out of proportion to its size; including Great Britain, Japan, and of course, Cuba. That they are also island nations has never been lost on me. It could have been just as cozy for visitors and citizens to remain on the island: stay home and enjoy the resplendent beauty found there. Many did - and do. Yet, both natives and guests, essentially exported the culture enough to tease and tempt the rest of us.

So when a trip to Cuba salsa’d its way onto my radar screen - and that it fused with a subject that was a great passion of mine - and one that has only burgeoned as time marches on - made this an opportunity I couldn't pass up. The educational tour’s theme was Sustainability in an Urban Environment. Looking back now, it seems so prescient. I hurriedly signed on and made my travel plans. I later learned that if I hadn't joined the group - they would've had to cancel because there was a minimum participant threshold. A kind of “Kuban Karma - or Cuban Carma!” A prelude to the magic of the trip.

Bike Rides and Gardens and Farms and Fine Art and Ballet and Swimming
We were a tidy group. And got along splendidly, I might add - especially me and George. George was and is a world traveler - for his work with the US government’s Sister Cities International program. (Boy, do we need more of this friendly partnership program, launched in 1956 by Dwight Eisenhower to honor each nation’s “culture, character, history… )

George hailed from Palo Alto - now from Hawaii - but it was like we’d known each other from the streets of New York our entire lives. We loved the adventure, the cigars, 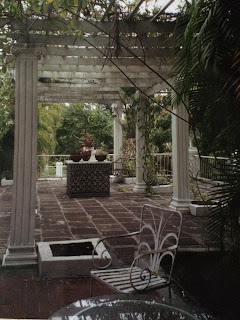 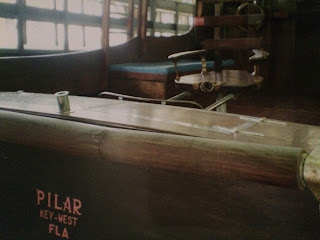 I felt the two of were kind of renegades - partners in mischief and curiosity -  because we not only wanted to experience the educational itinerary, we also wanted to visit the Cuba of our dreams…

We especially had fun getting away on that old motorcycle with the sidecar! 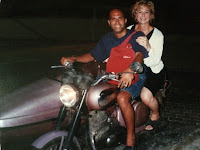 We’re still friends today. George send postcards from his globetrotting journeys and I included a version of our Cuban daiquiris in my soon-to-be-published book: Finishing Touches: The Art of Garnishing the Cocktail

Our introduction to Havana was a group bike ride through the streets to the cemetery - to a late lunch comida. 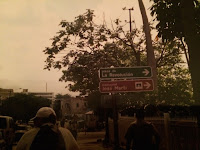 Like Paris or other European cities, cemeteries are places for families to gather, picnic and honor their ancestors amid the beauty of the landscape and the sculptures. 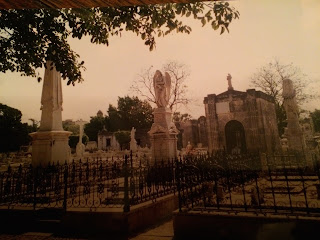 It was like that here in the US (not a forlorn or never to be visited place except for funerals) It still is in many places, including Green-Wood in Brooklyn.

Our lunch was remarkable for its good, fresh food - not much but in a time before farm to table took root in the States, it was good to eat in a kind of farmer’s market - simple plate of rice, beans and vegetables and a beer. When we finished eating and asked for the check, we were told $20 - and so I chipped in the Jackson (all transactions were carried out in US currency). Much to my astonishment, we were told that the entire lunch -- for all of us - was that price!

We also learned about how the urban population in Havana was thrown into a world of near starvation after the Russians abruptly left the island. The lack of sponsorship was dramatic. We were told at one of our evening talks that the citizens were soon “muy flaco” -- very skinny - as he pulled on his belt for added emphasis.

The next day we were taken to a farm -- right in town. 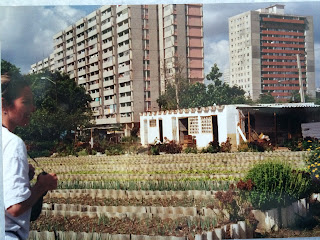 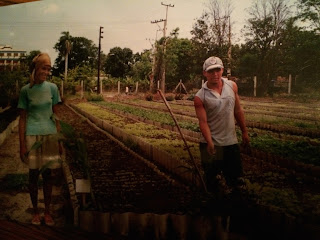 We were shown how with limited to no resources - the citizens of Havana had to cope with immediately growing their own food.

Not unlike how the Cubans learned to be expert mechanics and preserve those big American cars, 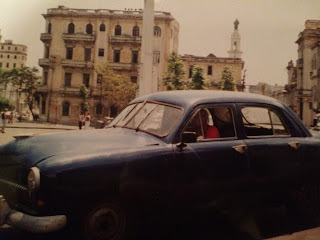 so too they learned to preserve and care for their new-found farmland. 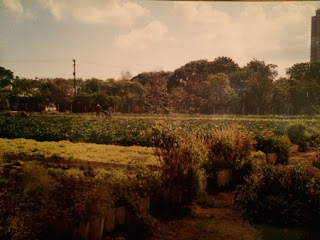 And it was all organic - for no other reason than they couldn’t afford to purchase fast-acting fertilizers and chemical boosters. In hindsight it all worked out for the best. 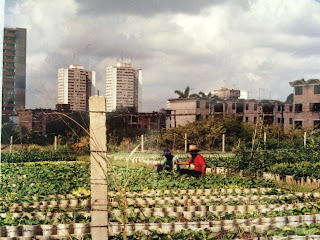 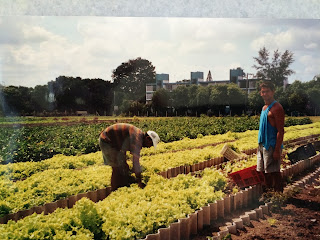 But we could understand it was scary times for the Cubans. Organizing, establishing teams of urban farmers, nurturing the soil with homegrown compost and with vermiculture -- or using worms to kind of speed up the organics to produce a vermicompost. 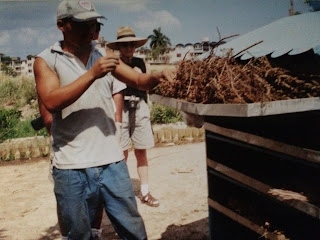 There were tidy rows of vegetables and fruits in kind of raised, elevated beds to help insure better soil and growing medium - and lots of tires used as containers. 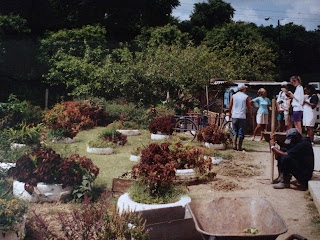 At least Cuba is favored with a kind of perpetual growing season. We all learned what citizens can do when getting food - and growing and getting that food close to home - is paramount. The urban farm experiment saved the people from starvation. It was a massive effort. The local community food stations had signs to advise the citizens on what kinds of produce would help them in terms of minerals, nutrition, and health - given they were eating the "recommended 300 grams of vegetables." (That's about 300+ calories and not even one meal by our standards.)  But they did it... 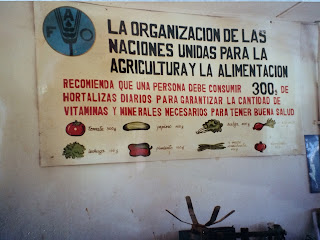 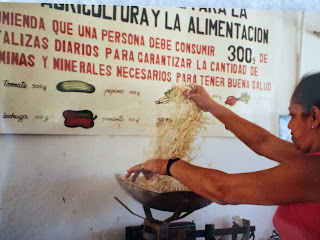 The food market “shelves” such as they were, are seen as pretty spare.   But on the plus side - no GMO's...  All organic. 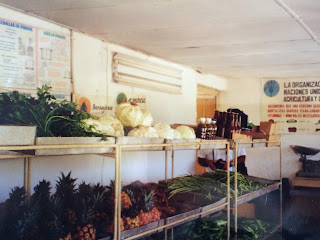 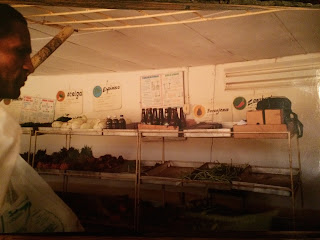 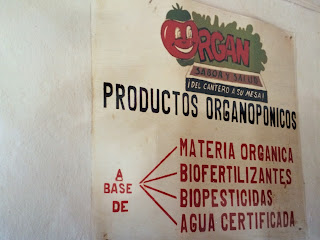 At the same time, it’s a kind of observational lesson in how to utilize everything to grow food - any and all containers and land/lots. Conserving water and ensuring healthy soils. It remains a lesson in sustainable food production that we can all learn from especially given the increasing urbanization of our world.


More on the Cuban arts and culture next up.

Congratulations to today’s historic first step toward more mutual exchanges between our cultures.

Cuba was a place in my dreams for some time.  And you know how often when one finally realizes or sees the reality that the fantasy disappears? This was not like that at all. In spite of its problems and persistent poverty, visiting Cuba only increased my romance and love affair.   And bolstered my respect for the island nation and the integrity of its people and the environment - that also has been in a kind of preserved bubble... For me, Cuba was visually stunning and rich in the arts, too. 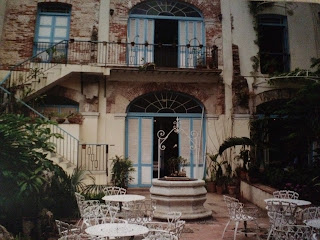 Email ThisBlogThis!Share to TwitterShare to FacebookShare to Pinterest
Labels: Cuban memories, growing food in cities, Hemingway in Havana, how Cubans avoided starving after the Russians left, How Cubans grew their own food, Visiting Cuba, what to learn from growing food in Havana