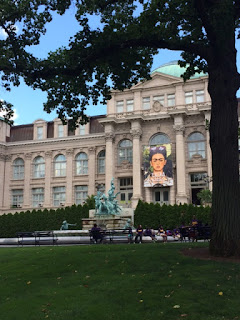 Frida Kahlo is a very special kind of enigma -- in a transcendent way.  Kahlo is, after all, one of the most popular artists ever -- male or female. Nevertheless, she is heralded as a groundbreaking feminist artist.  It was after a Kahlo painting sold in 1990 at Sotheby’s for nearly $2 million -- the most ever paid for a Latin American artist -- that the cinema’s brightest stars clamored to play her on the big screen, especially Madonna.
Ultimately it was the glamorous and accomplished actress, Salma Hayek who won the battle to ultimately -- and appropriately --  portray her fellow Mexican national artist.  Hayek earned an Academy Award nomination for her portrayal of Frida - a role that probably help secure our image and persona of the the iconoclastic artist.

Kahlo supersedes her artistic achievements - and her signature style has become readily recognizable to all generations; bordering on a parody of the independent, liberated, headstrong artist.  So, one might be tempted to think we know everything there is to know about Frida.  And yet, here’s the thing, New York Botanical Garden (NYBG) has curated and produced a compelling installation where you learn a lot about this enduring, fascinating icon. The show, “Frida Kahlo Art . Garden . Life runs through November 1st. (fittingly, the Mexican holiday, “Dia de Muertos” or Day of the Dead.)
The show is described “as the first to examine Frida Kahlo’s keen appreciation for the beauty and variety of the natural world, as evidenced by her home and garden as well as the complex use of plant imagery in her artwork.”  All of the multiple program celebrate “the vibrant culture and style of Frida Kahlo’s life in Mexico, highlighting the influences behind her work, including dance, music, food, and film.”

Indeed, NYBG has done a masterful job of bringing together heretofore undiscovered elements of Kahlo; her art and her life -- including her on-again/off again, enduring love, Diego Rivera - Painter
The show offers a very intimate look into Frida Kahlo - after all, you’re viewing her home and garden, as well as her public art.  Many of her art pieces can be seen the Art Gallery at the Garden in its jewel-box of a show space.
You’ll want to visit the Garden show several times because there’s that much to take in -- and it’s a joyful, happy exhibit.  You can also enhance your tour of the exhibit via an App delivered via your smartphone.  On-site or off Garden grounds, the App offers a biography, lots of archival photos, and it claims to provide contemporary photos and a video of present day Casa Azul - but my Frida App did not include these features...

First off, there is the star of the show: the almost in-situ replication of Kahlo’s Mexico City home: Casa Azul and its lush gardens, rendered throughout much of the Enid A. Haupt Conservatory. 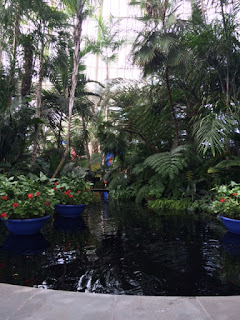 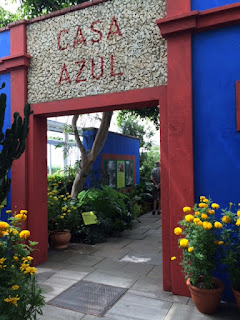 Meandering throughout the exhibit you will experience equal parts serenity: fountains, intoxicating, gentle, Mexican guitar music; along with bright, sherbet-colored walls, and exotic and curious plants boasting all manner of texture and shape.

This show is almost a remarkable departure of sorts for the Garden’s signature feature blockbusters.
Besides the collection of succulents to be found in the Conservatory’s desert house, I’ve never seen these plants featured as part of a major exhibit, nor such bright colors; or the sheer variety of plants the Garden has brought together for Kahlo.

I was most fortunate to have had a personal, one-on-one tour of the Kahlo exhibit from the celebrated curator, Fran Coelho, NYBG’s Vivian and Edward Merrin Vice President for Glasshouses and Exhibitions, (wow - that’s a title and a half to fit on a business card!), who leads the teams who create the Conservatory exhibitions. Coelho is an accomplished and creative plantswoman and horticulturist.
I learn so much from Coehlo every time I’ve been privileged enough to receive a hands-on tour with her.  But really, everyone benefits from Coelho’s expertise and passion - her exhibits have her fingerprints all over them!  Plus she’s on-site, in the Conservatory pretty much all the time - looking after and caring for the plants - and the visitors who walk the shows with heads up, or peering down at the plant labels or who are taking scads and scads of photos, selfies with the exuberant plants or taking videos of the sensual delights discovered in the designed garden displays.
Coelho explained how the show probably came about at the suggestion of Barbara Corcoran, the Garden’s Vice President for Continuing and Public Education.  Corcoran, Coelho noted is also of Latino ancestry, first raised the idea that Kalho would be a compelling focus for a Garden feature exhibit.

Soon, the Garden’s top brass, including Coehlo and Karen Daubmann, Associate Vice President of Exhibitions and Public Engagement,  were researching Kahlo and visiting Casa Azul in Mexico - as she explained to an audience of horticulture interns and the Students of Professional Horticulture at a lecture earlier in the day at the annual Green Industry Intern Field Day III, at The New York ...

Coehlo explained to me how the Garden team took lots of pictures of Casa Azul.  The pyramid garden featured in the exhibit was recreated to allow for a very robust display of garden pots and containers - mainly terra cotta. 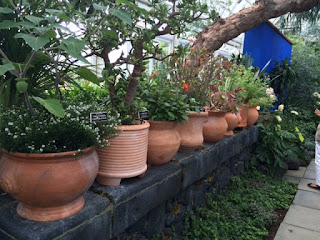 Cactus is the plant of choice in the show, however with more than 2,000 different kinds of cactus - and seemingly that many pots: some Italian, most Mexican, some from the Garden’s collection and many that were replicated from Casa Azul collection by the Garden’s Vice President for Retail and Business Development, Richard Pickett and are now offered for sale at the Garden -- it’s not likely that you’ll think you’re seeing double.
Quite the contrary. In fact, as we toured, talking about what a unique opportunity it is to showcase the plants in the containers so visitors can really get to see the plants and be inspired by them. 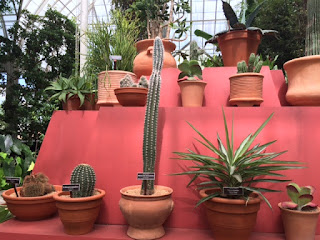 Some plants they know, she said, some are new introductions.  The exhibit also offers the opportunity to show visitors how they might display the architectural beauties at home.  We agreed how much we love potted plants. 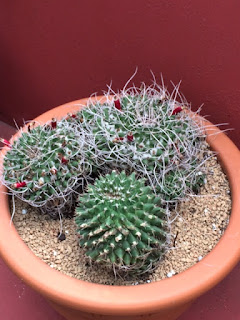 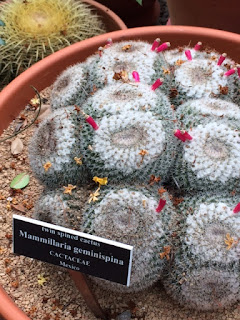 We both “oohed” a delighted exclamation when we turned the corner of the pyramid garden and saw a curious-looking tube-like bloom on the Rathbunia sonorensis cactus! 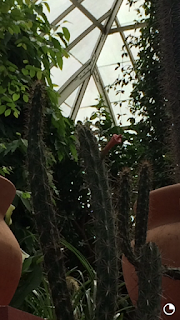 Coelho pointed out the Echeveria, Calla Lily (that we found rooted in a snap while gardening in Ecuador earlier this year), the national flower of Mexico: the Dahlia, 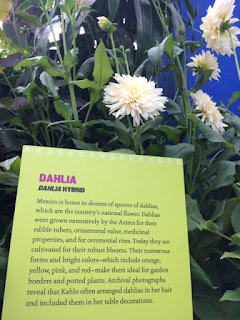 the tidy Stenocereus marginatus, and other favorites as she described the challenges of not only getting the soils right for the containers -- sand perlite mix, and because these plants are difficult to root, she brought in bone root from California nurseries.
The pots or containers are more difficult to maintain -- need more water.
After the show closes, most of the plants in the exhibit will become part of the NYBG permanent exhibit.

Turning to the outdoor display behind the Conservatory - surrounding the Lily Pool Terraces, is a key part of the Frida exhibit - and as Coelho noted as part of our July tour - “This will be in in its glory in the fall.”  Now! 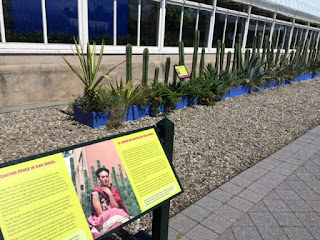 The gardens here feature all kinds of Mexican species and cultivars that Coelho and her team were eager to showcase.  There’s Lantana, Asclepia, French Marigolds (I love to pair these with purple Heliotrope with its vanilla-scented blooms), Mexican Salvia (Salvia is the largest genus of plants in the mint family and I love growing and enjoying these low to no-maintenance work horses of the garden. Ditto for the candy-colored Agastaches - from which I also make a delicious tea to delight my house guests.) Who doesn’t love the glory of the Passionflower and its fascinating uses and lore?  It’s on display here and just crazy complex and glamorous.
(She's also tucked in some ornamental edibles out here. Shhhh. See if you can locate them while touring the show.) 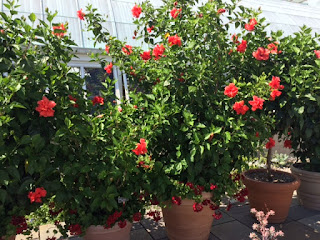 Coelho pointed out this garden is kinetic gallery of nature - with butterfly and hummingbird pollinators darting and zooming about creating more aerial beauty in motion.
I looked over to the far side and saw what I thought were just about the loveliest yuccas or agaves ever - except for maybe the Century Plant  a favorite succulent of mine.  Turns out, Coelho introduced me to the Yucca Furcraea an agave, yucca relative. She’d had a few but added to the collection for the show. Stunning bluish/greenish and yellow color, the big baby is zone 4 so my crush has to reserved for a container planting next spring. 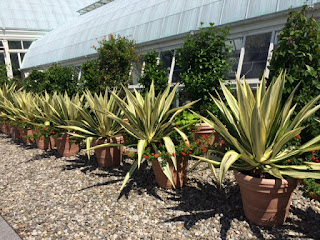 I asked Coelho what does success look like to her for a blockbuster show like this?  She said it’s the “Wow factor.”  When she sees the show clearly puts visitors in a good mood.

Programs
The Garden has produced an immersive “edtu-tainment” suite of program elements that are engaging, fun, and provide a kind of Meetup sense of community, too.
In addition to the Conservatory exhibit, there is series of Kahlo’s painting and works on paper art in in the Gallery - and a fashion display of sorts in the Britton Rotunda of the Library,  inspired by Kahlo’s double self-portrait The Two Fridas with two paper mache “dresses” on mannequins, as rendered by Artist in Residence, Humberto Spíndola. 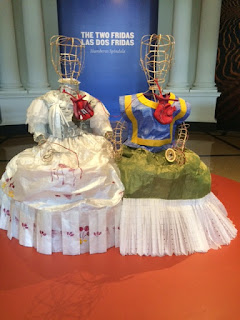 No story about Mexico is complete without a feature on the country’s homegrown tequila; especially because this favorite spirit is made from a plant: the beautiful agave. Sponsored by Jose Cuervo, the story of Mexican tequila is told through botany and craftsmanship.

A chance to win a trip to Mexico City is sponsored by AeroMexico, Condesa df
Just text to 56512 - “NYBG FridaRetreat”

The Evening Programs (6:30-11 pm) remaining are October 1, 9, 16, 22 (which is also LGBT Night) and the 30th. I was told these are really fun evenings -- with many of the visitors dressing up as Kahlo.
The Garden positively glows at night - so don’t miss this chance to be a true New Yorker - enjoying the evening out at one of the Frida al Fresco Evenings. These special evenings of live music, dining, and shopping now last until 11 p.m.
The evenings offer food, drink, dancing, and art in the Garden. What else is important to life?!

There’s something to fit every schedule, including:

Visitors on Saturday, September 19, had the opportunity to attend a very special live poetry reading by Rachel Eliza Griffiths who read her own work as well as select pieces by Nobel Prize winner Octavio Paz - Author, Poet, whose verse adorns the Poetry Walk. Remember, t
Plus the Garden is open until 8 p.m. on Saturdays, so visitors can enjoy the cultural festivities until past sunset.

Check the NYBG web site at: Frida Kahlo for a complete listing things to see and do at the exhibit. 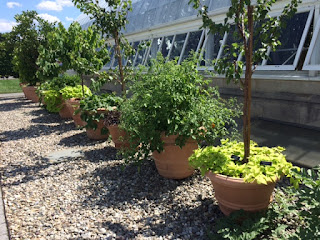 (And don’t you just love those Sigourney Weaver radio spots promoting the Frida Kahlo show?  She is a wonderful advocate for the Garden. Cheers!)

Hope you enjoyed the sneak peek images, video and tour -- so glamorous...
Posted by Garden Glamour at 4:46 PM