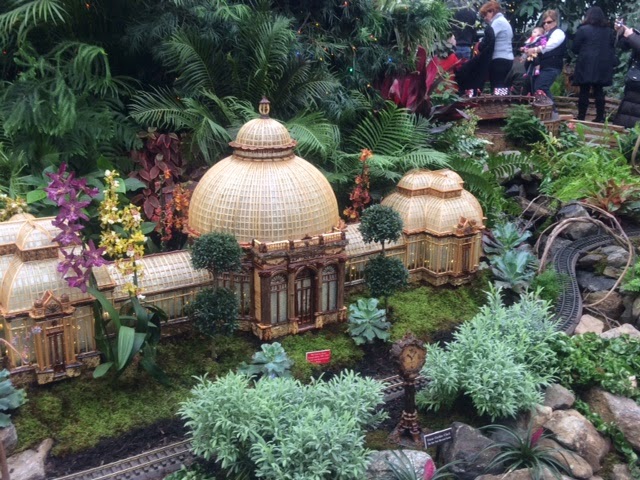 Garden lovers can’t help but wear their hearts on their sleeve.
And, climate-change notwithstanding, in the colder, temperate zones – say seven on down  – that sleeve is a wool or fur one!
FYI, the USDA released an updated Plant Hardiness Zone Map in 2012 using 30 years of meteorological data.  See how your garden zone may have changed.

To get our fix of non-dormant plants in the winter, heretofore Temperate gardeners and growers frequent our beloved botanical gardens for classes, botanical art, lectures, films, and tours.

Then, there is The New York Botanical Garden's Holiday Train Show that takes visiting a plant-filled museum of plants to an entirely artful plateau that is transporting.
NYBG “owns” Christmas and the Holidays this time of year.
Can’t get in the spirit?  Shopping leaving you not fulfilled?  Ugly sweaters leaving you itchy??
Get to the Annual Holiday Train Show.

Like one of the Russian nesting dolls, there is layer upon layer of surprise and delight and sensual wonder – twinkling lights, colorful plants, trains.  The Enid A. Haupt Conservatory is transformed into a magical, fairy tale you can walk through.
We did this week.  Mother, a favorite garden client, Maria, and friend Judy were mesmerized yet again.  The Holiday Train Show brings out the child in all of us.

The presentation is all made from plant parts – which curiously, some visitors didn’t know even after visiting the show.  I know this because I was helping some young women find their way back to Manhattan on the train a few weeks ago and we got talking… I think that points to how incredible the designer Paul Busse and his Applied Imagination team are.
They create New York Landmarks with the plant parts, including some of my favorites:
The Arch at Washington Square Park (near where we live -- in real life!) 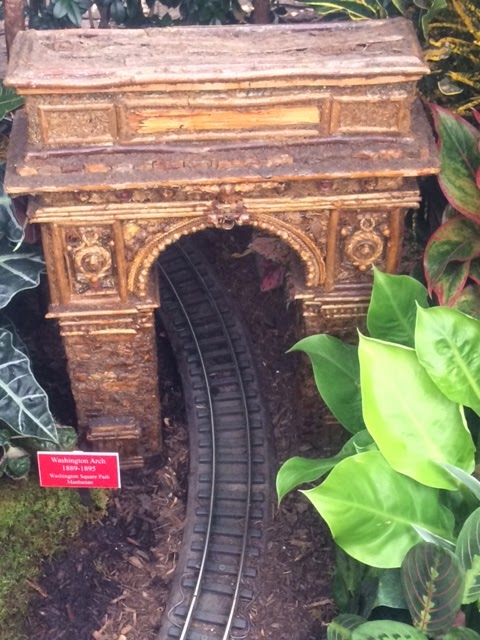 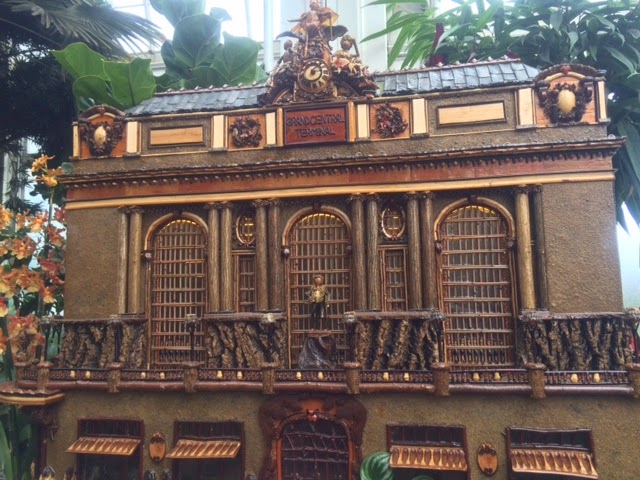 and the Garden’s own Conservatory. 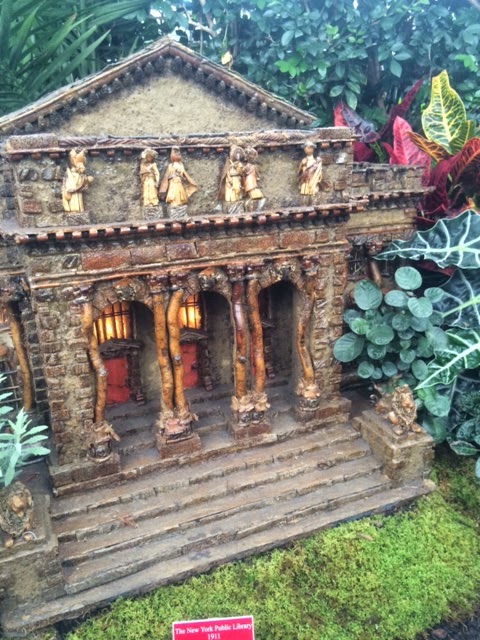 Here below is NYBG’s news about the show.  The photos are mine.  No words needed… The show is breathtaking, leaving one rather speechless…

The New York Botanical Garden’s Holiday Train Show®, a New York City holiday tradition for visitors of all ages, opens for the season on Saturday, November 15. In its 23rd annual exhibition, New York’s Favorite Train Show presents an enchanted New York enlivened by model trains amid the glow of twinkling lights in America’s premier Victorian-style glasshouse, the Enid A. Haupt Conservatory. The cherished holiday experience at the Botanical Garden continues through January 19, 2015, with a plethora of accompanying programming, including children’s activities, poetry, classical music, cocktail evenings, and more. 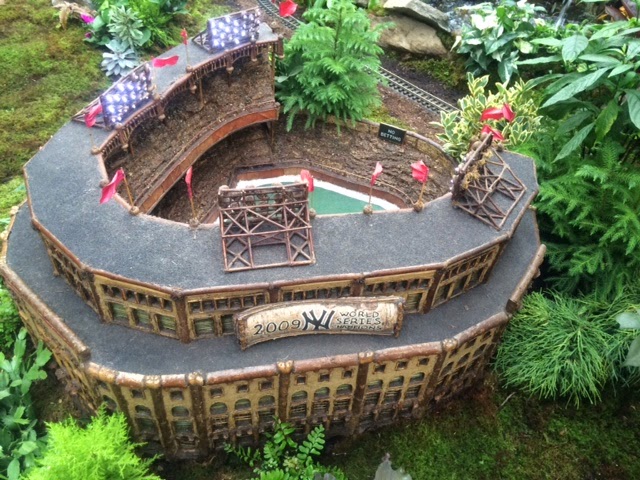 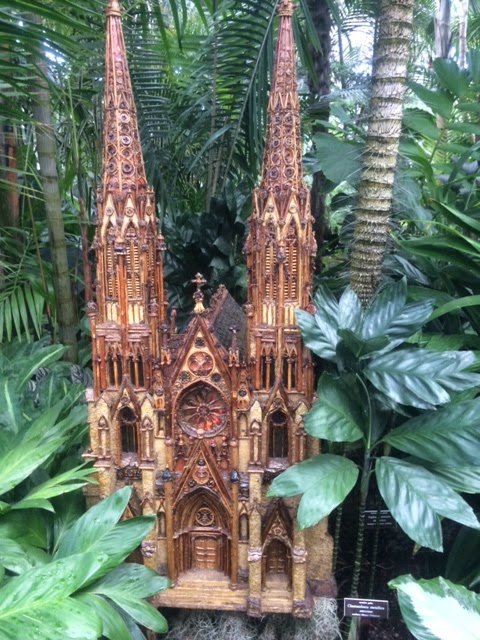 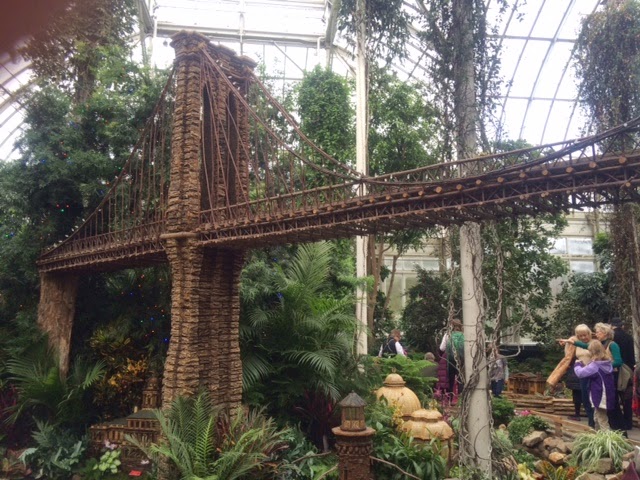 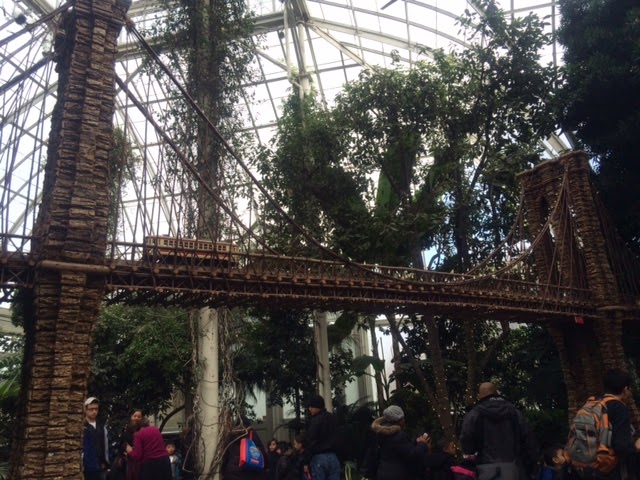 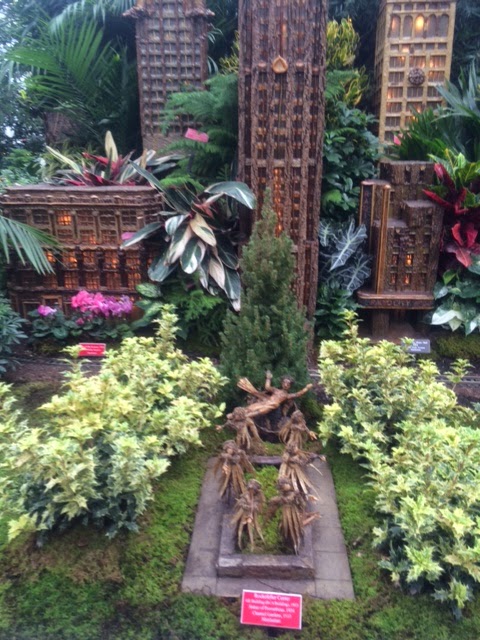 are among the favorites in the Botanical Garden’s collection of more than 150 Holiday Train Show replicas. This year only, in celebration of the 50th anniversary of the 1964 New York’s World Fair held in Queens, the Holiday Train Show features replicas of the World’s Fair-famed Unisphere, 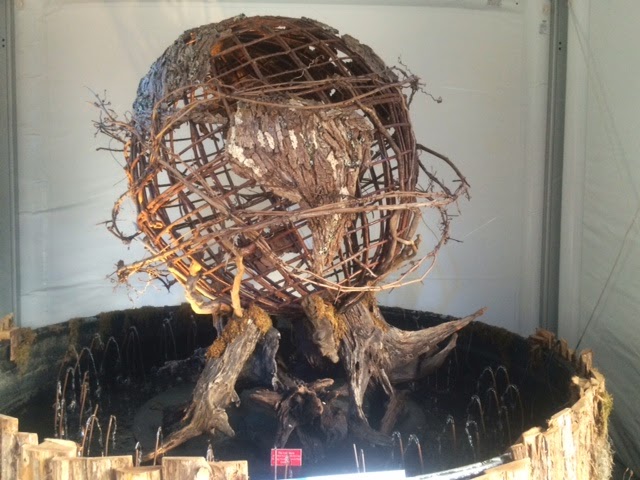 observatory towers, and the Tent of Tomorrow at the New York State Pavilion, all from the Paul Busse Collection.
Over 20 large-scale model railway trains and trolleys—from American steam engines and streetcars from the late 1800s to modern freight and high-speed passenger trains—traverse nearly a quarter-mile of track across rustic bridges, along overhead trestles, through tunnels, and past waterfalls that cascade into flowing creeks. The trains in the Holiday Train Show are G-gauge, sometimes measuring more than two feet long and weighing as much as 10 pounds. Thomas the Tank EngineTM and other trains especially loved by children also travel the tracks of the exhibition. The Artist’s Studio, which will feature the World’s Fair replicas, also illustrates how the replicas are constructed by displaying in-progress models of Kykuit, the Rockefeller estate, will also be on display. 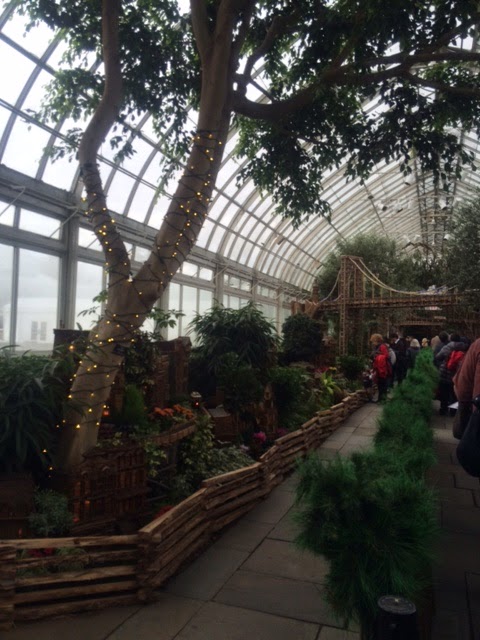 Seasonal Programming at the Holiday Train Show
The Garden brings visitors real trains, real landmarks, and real fun with programming for all. This year, visitors can enjoy Evergreen Express in the Everett Children’s Adventure Garden; a poetry reading by former U.S. Poet Laureate Billy Collins; classical concerts; and in January, a new performance at All Aboard with Thomas & FriendsTM. The Garden’s popular Bar Car Nights return on select Fridays and Saturdays in November, December, and January. 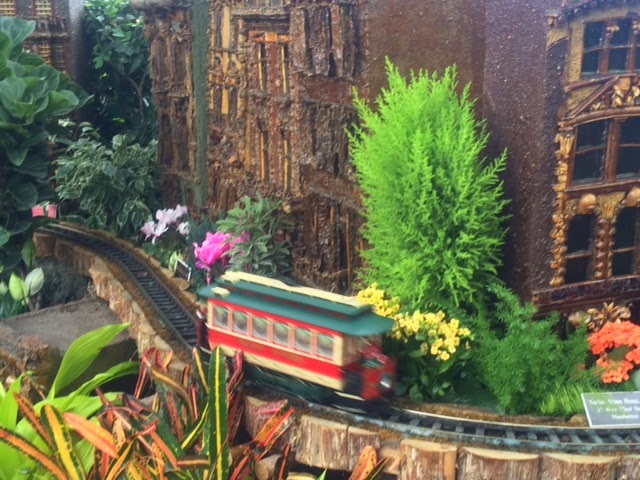 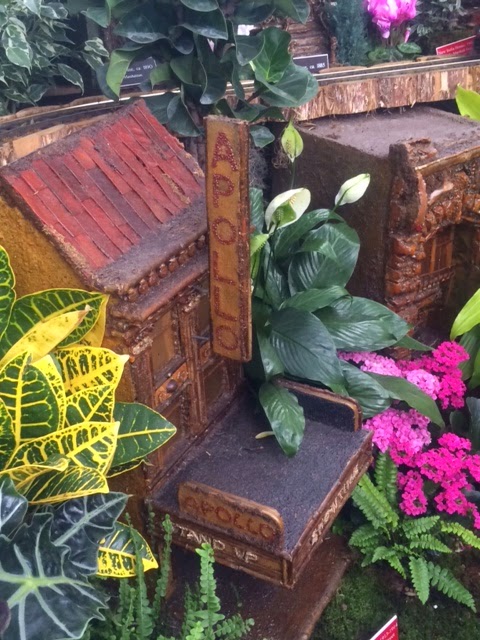 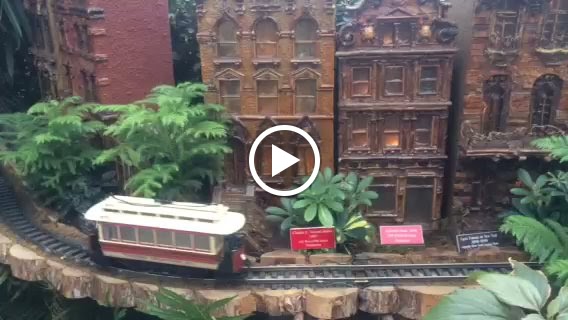 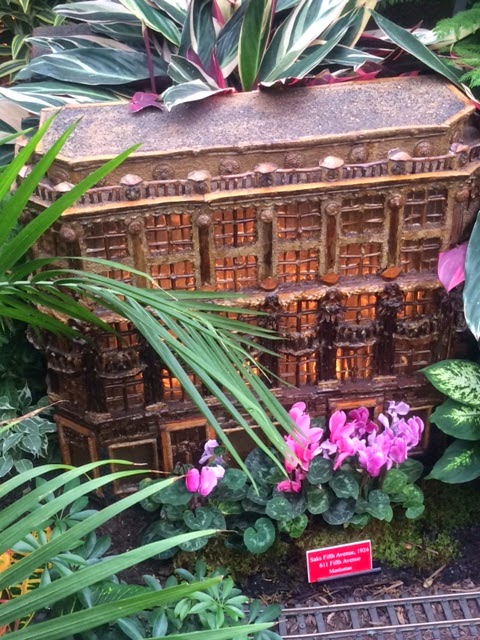 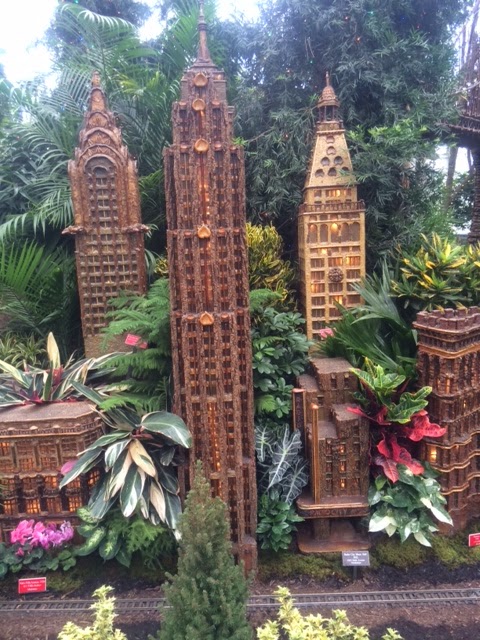 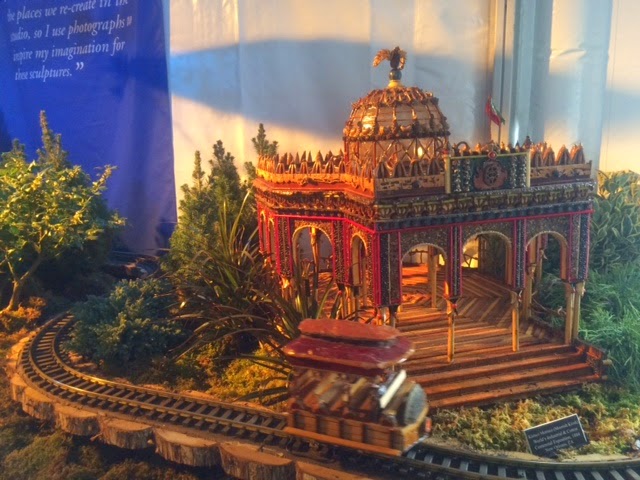 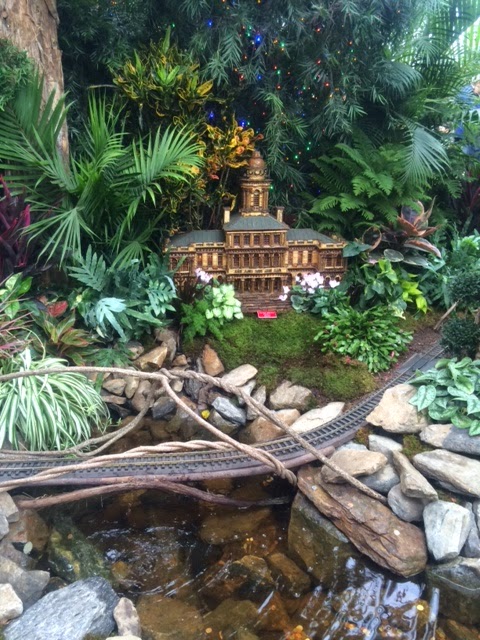 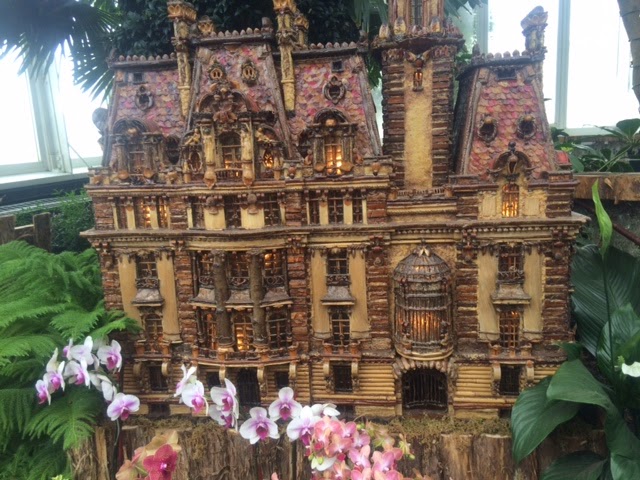 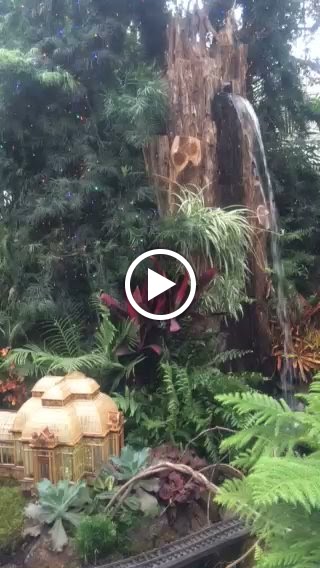 The experience continues in the Everett Children’s Adventure Garden with Evergreen Express. Children can embark on a journey through a variety of hands-on activity stations to explore cones, needles, and other amazing evergreen plant parts and craft a miniature balsam fir sachet. Children walk the trails of the Adventure Garden on a scavenger hunt in search of beautiful evergreen trees and shrubs. Each weekend brings even more fun with Holiday Train Parades and Ralph Lee’s Artist Station, where children can build their own train puppet. The Everett Children’s Adventure Garden is open all day for exploration. Guided Activities: Weekdays, 1:30–5:30 p.m.; Weekends and Holiday Weeks (December 22–January 2), 10 a.m.–6:30 p.m.

The popular Bar Car Nights return with opportunities for grown-ups to enjoy the evening while sipping a complimentary cocktail. Explore the Conservatory after dark with a viewing of the Holiday Train Show before heading outside for new seasonal fun throughout the Visitor Center. Dinner and refreshments will be available for purchase in The Pine Tree Café. Fridays and Saturdays, November 21 & 22; December 5, 6, 19, 20; January 2, 3, 9, 10; 7–10 p.m. Advance tickets are recommended at nybg.org. Non-Member $35/Member $25 (Adults 21 and over)


PRICING:
All-Garden Pass tickets start at $20 for adults and $8 for children (ages 2–12) and differ during certain peak times. Members and children under 2 are free.
Advance timed tickets are strongly recommended and are available at nybg.org. Discounts available for group of 15or more; contact Group Tours at 718.817.8687. For more information, please visit our Web site at nybg.org or call 718.817.8700.

Posted by Garden Glamour at 1:03 PM