Frank Cabot’s spirit and genius will remain forever among all those who love and admire and respect plants. 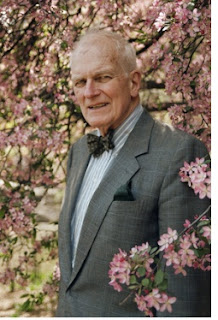 Mr. Cabot left this world November 21, 2011 and, as I Tweeted at that time, Mr. Cabot surely took a garden journey to “The Greater Perfection.”

It took three-plus extraordinary horticultural institutions to honor the always larger than life, icon of all things horticultural: Frank Cabot.

On Monday, April 30, 2012, The New York Botanical Garden (NYBG) and Wave Hill co-hosted, a The Garden Conservancy tribute to Cabot.

The private memorial was held at NYBG, filling the Arthur and Janet Ross lecture hall with friends, family, and admirers of this great friend of gardens.

The guests from Manhattan, were already greeting one another and chatting breezily on the train up to NYBG and the walk to the Garden on the impossibly clear and warm afternoon for the reflection on Cabot’s “new way of thinking about gardens in America.”

In the foyer, guests were checked in quickly; Frank’s books and the “Les Quatre Vents” DVD were available for sale.  There was continued happy hellos and seating courtesies, and soon, Envisioning a Greater Perfection was underway. 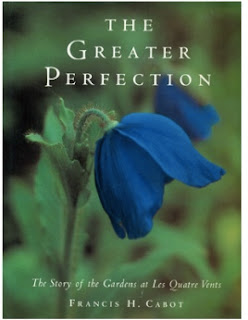 Antonia Adezio, President of The Garden Conservancy, the institution Cabot founded at the suggestion of his wife, Anne, welcomed the guests to the tribute and introduced Gregory Long, president of NYBG who welcomed all to the Garden and spoke a bit about Cabot’s contribution to NYBG and to horticulture.

Angela Lansbury, a friend of Anne’s from childhood and an honorary chair, the Garden Conservancy, spoke next.

She told us she was on that first garden visit to the The Ruth Bancroft Garden with the Cabots. This was the seminal moment, we were told, when Cabot lamented how sad and regrettable it would be to lose an extant garden like the Bancroft.
Anne Cabot chided him to do something about it and to the endless gratitude of garden lovers, he did.  The Garden Conservancy was launched.  And with a garden angel like Cabot winging the organization’s development and inspiration, there was no doubt it would be a success.

Envisioning a Greater Perfection
The Garden Conservancy Tribute to Frank Cabot was a 90-minute reflection presented by leading horticulturists, friends and family, followed by a wine reception in the Garden Terrace Room.

The guests were each given a lovely program with the day’s agenda plus quotes from other garden enthusiasts and luminaries including Mac Griswold and Paula Deitz.  The program is a very nice remembrance and a collectable. 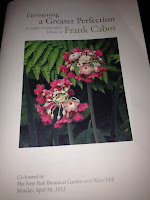 Barbara Paul Robinson spoke after Ms. Lansbury. An attorney by profession, Robinson worked for Penelope Hobhouse, the National Trust and Rosemary Verey, and her book on Verey is due out shortly: Rosemary Verey: The Life and Lessons of a Legendary Gardener
Robinson also pointed out that Verey bequeathed her garden design plans to NYBG.  What a coup.  Lobbying of a sort was launched by her suggestion that the Garden install a Verey garden design for the public to experience and learn from.  Got my vote.

Robinson described how both Verey and Hobhouse admired and adored Cabot.
Hobhouse just wasn’t able to make the trip from England, so Robinson read the letter the garden legend wrote for Hortus magazine that honored Cabot and his garden vision.  She noted how Frank seemed like an immortal. His design sense and plant knowledge were on full display at Les Jardins de Quatre Vents Quatre Vents

She wrote about what she considered his most ambitious private garden construction since World War II and how it could be a dangerous drive with Frank when plants were on his mind, penning, “He almost worshipped plants.”

The next five speakers are all plants-people and spoke of their relationship to Cabot, “painting a picture of Frank in the firmament of plants and horticulture.”

In soft and frequent emotional tones, Hinkley described meeting Cabot at his home garden, Stonecrop, and how that visit permanently determined his future.
Cabot evidenced a passion for the “wants and needs of the plants vs. the garden,” he explained.
Hinkley said his back grew weary carrying forth Cabot and his Les Quatre Vents inspiration….
“And no singing frogs at Heronswood, though” he said to more laughter.
Hinkley shared a touching insight into Cabot’s passion for plants; telling a story about walking in a cool Japanese ravine, filled with lilies and primrose.  “Frank stooped to pick one flower, held aloft to admire the sepal, design and fragrance.
“He was alone in the moment – seeing the universe in that moment. It is a moment of a true plantsman and showed his passion for life.” Hinkley said.

Marco Polo Stufano, founding director of horticulture at Wave Hill, a hobbit of a gardener, happily fuddled with his slides, the mere presence of which made him an anachronism, he laughed.
Stufano declared, “Gardening is one of the fine arts.”
He told his Cabot garden stories in pictures and spoke glowingly of Cabot’s dedication to enduring design.
“He painted a garden with living materials,” said Stufano.
Good garden design is filled with repeated failure, he offered to much head-nodding. “Good gardeners kill plants,” he added.  Gardens are trial and error, and plans must be thought of in decades not immediate gratification.  The enjoyment of creating a garden is the point of it all…

Stufano showed a number of the Garden Conservancy’s garden network, including Peckerwood Garden

Caroline Burgess, director of Stonecrop Gardens, once the home of Anne and Frank Cabot, but since 1992, a public garden and a school of practical horticulture under Burgess’ leadership.

A British national, Burgess provided the most fun and intimate profile of Cabot, starting with how she placed a phone call – from one of those red London phone booths, I imagine, saying Rosemary suggested she contact Frank for help networking a job at Wave Hill -- He has connections,” she told Burgess.
He could possibly help getting her work in the States.
Burgess worked up the courage, and with a few coins, placed the call to Mr. Cabooo, she said in her high-pitched Downton Abbey high tea voice.
With all the juggling of the phone on Cabot’s end, she was soon running out of money.
Just in time, Cabot said, “Give me your number. I will call you back,” he commanded.  Then said, “And FYI, in America, we say CaboT,” she mimicked, emphasizing the “T.”
Cabot added, “But please call me Frank.”
The audience roared with laughter.

When she picked up the receiver for the return call from Cabot, he told her to forget Wave Hill and come to work directly for him at the their home estate, Stonecrop garden.
She did.

She described that the Cabot estate was being nurtured by Frank and Anne who had taken an adult education course at NYBG, titled, “How to Improve Your Yard.”
She paused for emphasis and sent the guests into much endearing laughter for the sheer charm of that anecdote.
She added, “Obviously, that was quite a good course!” sending the audience back into peals of laughter.
Burgess related examples of Cabot’s kindness, plant knowledge, and hort networking. “He was a genius at placing people – and plans, “ she said.

Over the years, he wrote her countless letters of support and inspiration.
She cited one delightful letter in particular when he wrote her early on to encourage her to move to New York, quoting a 1909 song that preached, “Heaven will protect the working girl!”
It gave her confidence, she smiled.

I think there is a book waiting to be written with these letters into the heart and mind of the relationship between Burgess and Cabot and the gardens.

“Frank was a jokester, a comedian and a great cook,” she noted, launching into a story about his winning a Blue Ribbon at a local plant show for his dead plant, vomitas Rigormatis!”   The guests roared with laughter at this one. 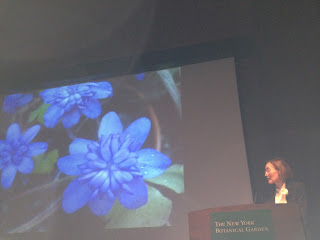 “He was so good at so many things and we are most fortunate he chose plants as his overarching passion,” she concluded while showing images of some of Cabot’s favorite plants including double hepatica and the blue poppies.

Dick Lighty, founding director of Mt.Cuba Center began his advocacy-themed tribute to Cabot with a Disraeli quote about the man and the time to get things done, that served as a context for Cabot’s personal character and traits that made him so successful.

“Frank believed in public gardens and served on many boards and offered his support to help the gardens achieve stewardship,” said Lighty. “He was a sought-after speaker on this topic.”

Frank was the epitome of the gentleman gardener, noted Lighty.

Colin Cabot, chairman, Stonecrop Gardens, and son of Frank and Anne Cabot was the last speaker of the day, and provided a robust, rousing tribute and a few fun reflections, all delivered in a theatrical and poignant way.  Colin looks like the quintessential prep school lad and full of spunk and style.
The apple doesn't fall far from the tree.

Colin began with a quote from “Candide” to reference Les Quartre Vents and the idea of  maintaining gardens.  Saying, “Voltaire agreed, ‘Let us cultivate our gardens’ We too must take care of this earth,” Colin said.

“Frank had a visceral response to plants,” Colin observed.
“He could weep at their beauty and ephemeral quality.”

“This passion could also lead to botanical excess,” Colin remarked. And then he told the story about how the New Zealand Cabot home came about after Frank saw plants he loved it was suggested he visit the island nation.  “A common suggestion can take a permanent life change when it came to Frank…”

Colin also told how his father insisted on preparing the soil and digging in for a row of thuja hedge plantings, evidencing patience and practicality in his quest for perfection.

On a humorous aside, Colin noted how all their dogs were named after single malt scotches, Dalwhinnie being a favorite (mine too J  Not the dog, but the scotch.)

When he and his father took overnight plant explorations, Frank was known to bring a rasher of bacon, cast iron pans and a bottle or two of wine and scotch, to be enjoyed during cocktail hour, thus achieving a gastronomic and artistic level of perfection!

Colin completed his prideful reflection of garden love with a few pronouncements that are sure to keep
Frank Cabot’s vision alive:
·      To respect the vision
·      To inherent the legacy
·      To inhabit – to get to know the land
·      To invest in the gardens well-being (I won’t ask for a check today – but “Just you wait,” he bellowed affectionately.
·      To interpret – to keep the gardens in good hands

Antonia thanked everyone.
Todd Forrest, vice president of Horticulture at NYBG invited everyone to take advantage of the peak blooms in the Azalea Garden before heading to the wine reception in the Garden Terrace Room.

It was a perfection that Frank would have loved.
The garden was brilliant: the colors, the planting, and the chirp of chipmunks and birds were otherworldly.

Following the reception, the bus was filled to take guests to Wave Hill for a private a garden re-dedication ceremony in honor of Frank Cabot.

Note: I have a priceless photograph of Mr. Cabot and me from an NYBG event that, initially, I was a bit reticent to share. However after telling the story about it with Colin at the reception, I think it will be just fine.
All good fun. Up next…