This was the inaugural horticulture lecture of the new year/new season: (Beat out NYBG by about half a day…)

It was a fitting kick-off, too.
Wave Hill bills the much anticipated Horticultural Lectures as “Architectural and Garden Design: Three Perspectives.” 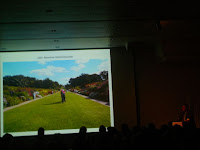 The first guest speaker, Larry J. Wente, is a quiet, persistent gardener and architect.
The expansive gardens for his country home, which is essentially an estate in my humble opinion, embraced years of dedicated planning and artful landscape design.
The property is 41 acres, and while he clearly is passionate about his gardens and the intimate, detailed planning he poured his life into for every garden room, he said, “It had to end sometime!”

From a lecture review standpoint, Wente’s presentation was a good mix of “before” and “after” gardening magic. 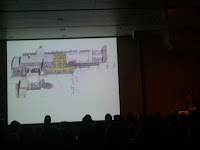 He took the audience on a garden tour that spanned a decades-long timeline and virtual tour around the estate -- and from blueprint layout to finished garden room – in a mix of seasons.
The preview was almost better than an on-site tour, allowing the audience to see the expanse of the garden rooms, vistas and maturation of plant material over time and place.
OK, we didn’t get to experience heady fragrance or feel the brush of the grasses or see the sun set across the fields.  No. We weren’t seduced by any of those garden art come-hither flirtations. But then again, we did didn’t linger. And we learned a lot.

Wave Hill wrote “His Dutchess County property, where the integration of a barn-like home with the surrounding farmland and meadows intentionally blurs the line between house and garden, is a favorite on Garden Conservancy Open Days.”
We could readily see why.
This garden is a jewel – it’s been lovingly crafted and tended over time, with the plants and the design leading Wente’s aesthetics to integrate a garden for all seasons with the architecture. Like two peas in a pod or two sides of the same coin or…
Well, some garden lovers don’t get this integration concept.
Sometimes it seems everyone wants an English garden.  As if nothing else existed or was possible. So it was satisfying to learn how a master accomplished this feat of fusion.

Also, Wente seems so special because unlike many architects I’ve encountered, he clearly Loves plants!
You can see it in his exuberant display gardens and the great variety of plants and plant textures and structures.
He quoted the beloved New York City public garden designer, Lynden Miller, from her book, “Parks, Plants & People: ”Beautifying the Urban Landscape” http://tiny.cc/fc60i, saying he too believes good garden design is “painting with plants.” Lynden smiled from the audience.

He showed inspiring use of color.
Besides the color combinations of the blooms in full blossom and the mix in the perennial borders, he showed a lovely end of season garden palette when the colors transition from blue to purple to grey.  He mixes with yellow for contrast. 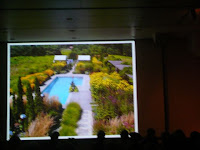 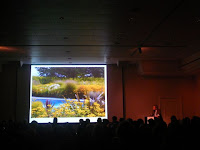 He says he abandoned his original color scheme for the pool garden and instead followed his color aesthetic. The use of Japanese red blood grass punctuates the garden and acts as an accent in the gold and bronze-colored plant garden there. 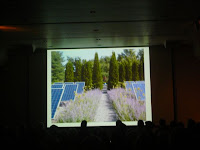 Most outstanding is how he made the blue solar panels integrate into a garden design with the use of contrasting red poppies. Brilliant! 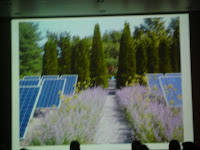 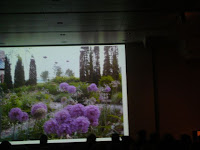 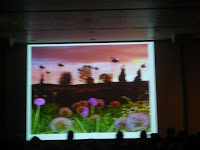 Wente noted many of his garden “rooms” have been featured in Martha Stewart Living magazine. He pointed out a few times that he and his partner’s curious tuteurs –  rather large-sized, bold silver creations that were paced among the giant alliums -- were omitted by the MSL photography team. “They seemed to think they were a bit tacky,” he grinned.

He went on to point out his influences, including the Spanish landscape designer, Fernando Caruncho, best known for his minimalist and classic garden design and use of light and shadow.
Here is a recent article written by my amazing garden friend, Donna Dorian.  I think she is something of a Caruncho expert, having lectured and written about this masterful designer on more than a few occasions: http://www.elledecor.com/decorating/articles/earthly-delights 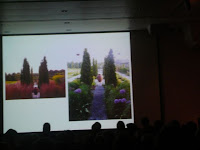 Wente introduced a vertical design element in his gardens to create mystery -- taking inspiration from the Italian gardens he visited.

He also substitutes natives to achieve a look. For example, Wente can’t do olive and cypress trees, but he can do apple and spirea. “It’s a different feel but essentially the same style and look,” he added. 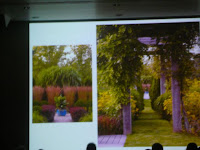 He also showed a great use of bamboo in pots. 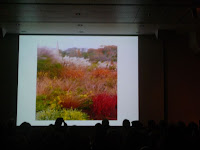 He uses a fair amount of grasses, especially the Karl Foerster grasses because of the all-season color and texture and contribution to pollinators in the winter months.
The textured view of apple trees is ethereal.
The images elicited a soft wave of “Ohhhs.”
The gardens boast a great variety of plant material, including perennials and grasses  - -Wente says he loves to see them blowing in the wind.  (Don’t even think about Dylan here.) 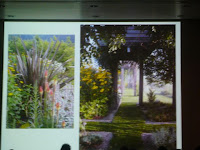 He employs turf grass walkways frequently throughout the garden because it’s cool on the feet.  Nice. One doesn’t always need pavers or gravel or stones.

As a successful architect in the design firm, Gertler & Wente Architects, LLP, it’s not a surprise to see how Wente made excellent use of designing gardens on the axis. 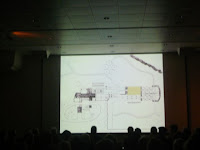 The pool garden, for example, has an axis point to the pool house so that the view slows the walking there.
In another place, the use of a large blue pot at the end of an arbor walkway acts as a designed focal point.
Wente knows how to draw the eye.
And the heart. 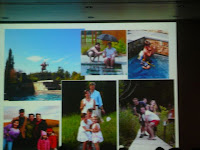 Wente concluded his garden tour and lecture by including images of family and friends IN the garden.  Silly how this is rarely if ever done at presentations, now that I think about it.
Wente narrated the portfolio of family members delighted to be in the garden.  “The best thing about having a garden is to have people in the garden.  Look at my granddaughter – she looks like something out of a Sargent painting,” he beamed.   His partner Jack and their families could be seen enjoying and embracing the beauty of the gardens. 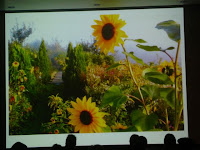 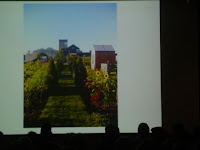 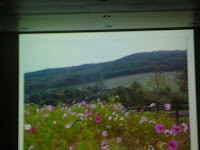 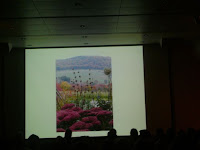 Wente quickly showed two of his clients’ design projects.  There was an intriguing Hudson River green roof cover that screened the home for the neighbor’s house up above.  The green roof allowed an un-interrupted view for the neighbor and an energy-efficient, beautiful roof alternative for his client.  Nice neighbor to have…
He also showed a modern, mid-century take on a courtyard garden that opened up the space to draw the eye to a reverse side valley view. 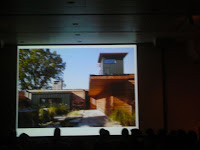 The last garden design example was another one near the Hudson River. The house and garden was appointed with waterfalls, and water features to create a fairyland of a “natural” garden.

There was a two question Q&A, the most salient one asked:
How do you manage the maintenance? Larry smiled.  “We have a woman - with help. Otherwise, Jack and I used to do it all.” Wow.  That’s garden love and commitment.

Audience guests were keen to say hello to each other after the Holidays so there was the post-lecture hugs and kisses and catching up.  Our little group went across the street for some delicious seafood dinners, wine and some garden catching up of our own.
A perfect evening for garden lovers.

From a Duchess to a Queen!
I am very much looking forward to the next Wave Hill lecture: February 22 with Rosemary Verey: Queen Of Horticulture.  http://www.wavehill.org 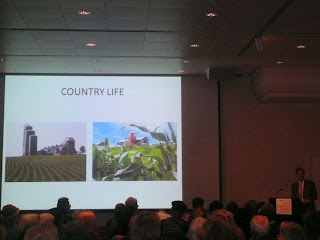 Posted by Garden Glamour at 4:35 PM