New York Botanical Garden (NYBG)
A few years ago, NYBG started a new trend as part of its successful winter lecture series.
To borrow a baseball metaphor, they bring in a switch hitter, prior to the featured speaker.  It’s like the audience warm-up to the main show except when it’s not.
In the beginning, audience members just didn’t like the Garden cutting into their time. After all, these are subscription tickets and people want what they paid for.
The brief intros were more like commercial announcements, as in what’s coming up at the Garden/don’t miss this or that exhibit…
Over time, I think the warm ups have yielded more substance, offering more of a coming attraction kind of lucky-strike extra.
I’m not saying there aren’t some attendees who still text one another during the preview talk wishing it would end, but I do think the quality of the bonus talk has earned a few stars.
The Garden should own up to the new format though, as part of its truth in advertising, rather than just popping it in or seeming to “sneak” it in.  Especially if they stand behind the commitment and quality of the talk – after all, the Garden possesses world-class plant experts in many fields who can add to the dialectic between science and environmentalism and sustainability and plant science.

Todd Forrest, vice president of Horticulture, Living Collections, NYBG provided the preview.
Todd is an informed, confident professional, who can also communicate complex earth science paradigms and triage the worlds of horticulture, garden art and botany so that the narrative is compelling and sometimes, downright funny.

Fittingly, Forrest talked about the issues of history, preservation, and sustainability surrounding the Garden’s old growth forest.
This is a man born to his calling.

He impressed upon the audience how the 50-acre hemlock grove is a “changing forest” rather than a preserved, pristine place that is more of an archived attraction.
NYBG took possession of the forest in 1895 – in the spirit of the Hudson River school and in the context of expansion and a retort to the city’s rapid industrialization. 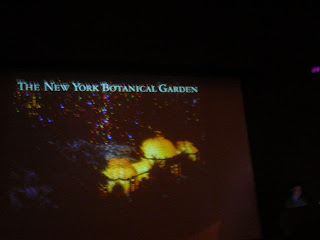 The rest of the Garden was, in fact, built around the forest.

Forrest used nostalgic images, government surveys from more than a hundred years ago, through to today’s Garden and volunteer staff to demonstrate how the forest has been studied and documented.  The baseline was established by the WPA in the Depression to create a statistical picture of the oak, hemlock and cork trees there; 17% was re-mapped about five years ago.

The Garden tracked the history of the forest’s soil composition, its chestnut blight, theft of the native jack-in-the-pulpits, and the exuberant bird watchers who inadvertently contribute to soil compaction when they go off-trail.
He pointed out the fact that the squirrel population is now off the charts—used to be 2-7 per hectare. Now it’s 45-51!
Then, there are all the invasive species the Garden has to deal with and manage.  Exotic species alone are up 92% since 1984.

Gardeners are hopeful people though.  And true to form, Forrest outlined solutions that have proven effective in managing the forest, including identifying and removing the invasives: knotweed, ranunculus, Japanese honeysuckle, and cork trees, for example. Beat the squirrels to the hickory and oak nuts, and nurture good herbaceous plants like ferns.  This tedious, dedicated work has yielded results and made a difference, according to Forrest.

Forrest soon introduced Larry Weaner with a funny anecdote, before noting what an innovative landscape designer Larry is -- how blown away he is his by Larry’s sophisticated sense of horticultural style and his respect for the processes. http://www.lweanerdesign.com/

Breaking The Rules – Featured Speaker
Larry thanked Todd for laying the foundation for his own talk about ecological design and succession: both natural and man-made.
Plus Larry noted how much of Todd’s presentation was in fact, a primer for his message. And he was right.

Larry launched his presentation showing the once fashionable “Meadow in a Can” marketing ploy, asking for a show of hands of those who tried this garden slight-of-hand.
His point was that this attempt took advantage of our collective conceit to make a happy, carefree meadow.
What were we thinking?
Well, for starters, we were romantic and loved those billowy blossoms swaying in that random, dreamy dance.  What did we know of habitat?
Like a born-again preacher administering to a receptive, converted flock, Larry seemed to give us group absolution, saying, “It was purely cheap seed.” Adding, “Invariably it was going to fail. There was no connection to the real world.”
And just like that, the dream evaporated. Pouf. 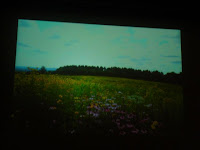 Turns out, producing a meadow is just as intense as a making a successful perennial border.

But this little cautionary tale established the foundation for Larry’s message and brought us to understand how his ability to break the rules made him a leader of ecological horticulture.
And how we can all follow his example to the promised land of less invasives, less lawn, if we can just think about understanding the ecological processes and habitat.
In the handout, he asks, “Why break the rules?” The answer: Because considering ecological science changes everything.

A key element we learned is that of a competitive environment.  Here the idea is matching habitat to conditions that will sustain the plant species.

Larry urged us to think about plant communities -- where plants associate with their preferred evolutionary buddies.  Think diversity here.  Monocultures cannot sustain themselves. 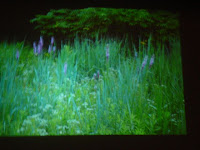 Instead, stability is found in companion planting.
Plus, different plants need different pollinators who recognize their native species. 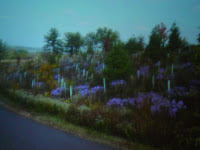 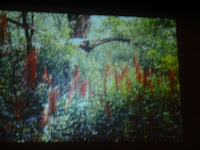 For example, if a tree falls in the woods there opens up more light there so that the cardinalis plant, for example, that has been “slumbering” will now germinate and grow where heretofore it had been kept like a Sleeping Beauty, awaiting its prince charming.
Plants adapt.
Using a Mike Tyson analogy to describe a fair fight he urged us to prepare for the planting conditions we face.  Gardeners tend to be too hopeful at times…
Within plant communities, change is a desired aesthetic. Work with it. He recommends four plants per square foot will be overgrown except for natives where this metric will inhibit weeds.

Natural succession is management vs. maintenance to allow for change.  We don’t want death. Gardeners are about beauty and life. But Larry reminds us that plants do die.  Plan for it.
Also plan for plant compositions that change over time such as rudbeckia – or Black-Eyed Susan - that is a bi-annual.  It’s a process of succession of layers and tie in seed mix waiting to unfold. Plants grow at different rates, even in those meadows. 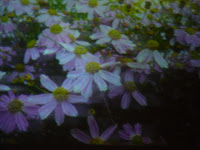 Traditional Practices might be advantageous.  Choose plants that match plants to habitat and community when designing a garden.  The competitive level is big so be mindful when selecting cultivars.    Larry used a coreopsis as an example.  A recent coreopsis introduction is rosea pink that is not a native species – it’s a wetland plant and would not do well in a traditional dry planting bed we are accustomed to for a coreopsis. 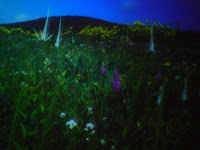 He also showed examples where no irrigation was needed when the soil Ph is correct; no staking needed for plants that were densely planted or vertically layered.

Design a garden by editing during the management phase.
When planting think about these priorities:
Soil preparation, 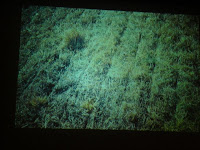 No tilling – avoid disturbing the layers
Imported topsoil vs. native soil
Be mindful of the soil amendments and organic material

Alter planting times.  Allow time between distribution of seed and pollination, waiting for weeds to germinate. During that time, he advises, the plant will have exhausted the weeds. 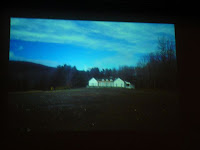 He also preached the common sense wisdom to select the season best for the plants over the weeds.  This methodology will also decrease watering needs.  Larry used the example of planting Mediterranean plants that require little water that were planted in late June/July thereby recreating or mimicking their native habitat and better insuring a healthy start.  This is in contrast to conventional wisdom, which is to plant in the spring – or autumn – and give the plants lots of water.  Something to think about… 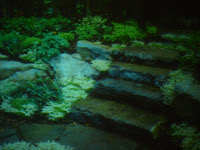 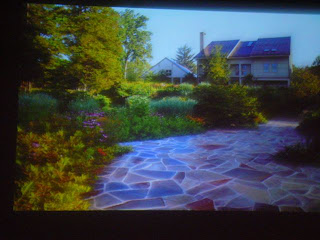 And look to what he terms Restoration Nurseries.  Most every other type of nursery has a single goal:  get the plant material out the door. Too often the plants don’t have a strong root system.  They promote leaves at the top of the plant.  But those scrawny, spindly plants are in fact, destined to be healthier in the long run, he told us. 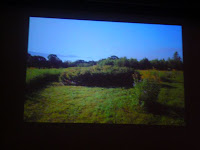 Larry employs a curious way to tamp out weeds:  Timed mowing.
Mowing seasonally cuts off invasives, forms dense cover and weeds fade out, Larry says.  It takes about five years to see results for this more human landscape.  “It’s sophisticated but not difficult to do,” he adds.  He showed how he did this with his own birch line with native spirea manipulating the tree-shrub composition and Migrating the Mow Line so that he can modify the sinewy path out to where he would prefer it – closer to a meadow.

He recommends cutting perennials in the spring not the fall. 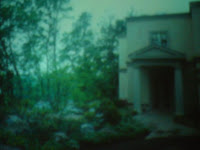 It was a lot of information – all terrific and in many ways it was learning to break some long held rules or assumptions.  Larry Weaner needs to produce a book about his out of the garden bed theories and evolved landscape design practices.  He says his goal is native plant dominance in the seed bank. 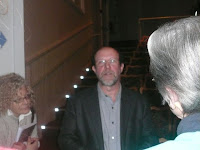 Hip, hip, hooray!  I, for one, plan to be a loyal follower and card-carrying member of the Larry Weaner Ecological Design fan club. 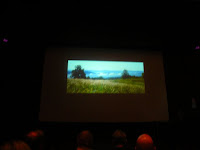 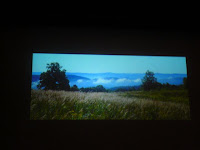 Larry concluded his talk with a beautiful piece of music that he said inspired him and that he hoped would help convey the experience of being in the landscapes.
It was a “Partnership of Nature.”  As a Hayden string quartet played, and breathtaking images lit up the screen, it was a few moments that underscored his sense of awe with nature. I cried…


Next up is Doug Tallamy, Thursday, February 16, 2012 at 10:00 am to discuss the use of native plants and the importance of insects in the garden, local food web and ecosystems. For more information and to register:
http://tiny.cc/n1b0q

Posted by Garden Glamour at 4:02 PM