The day’s cool beginning (the first in a week of blistering heat) beckoned adventurous design possibilities.
After all, when heading to Martha’s world of “It’s a good thing,” dreams unspool… 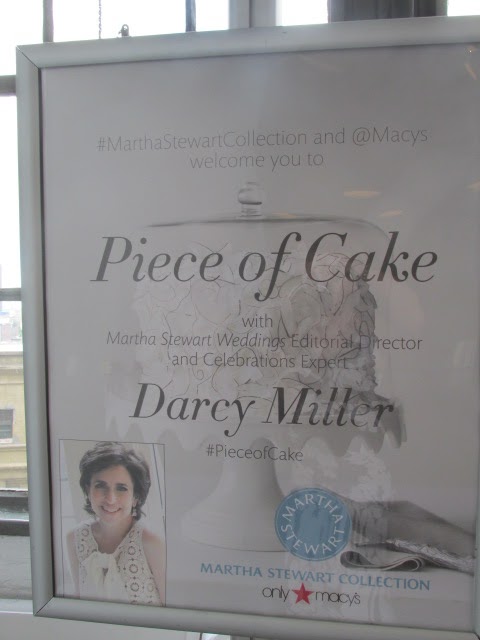 Channeling a bit of Maria Antoinette’s so 1% quip of “Let them eat cake,” there was sweet expectation in the air taxiing to the Martha Stewart Living Omnimedia offices here in Gotham.

Without a doubt, all things Martha are a deeply sensual delight of sight, sound, taste and fragrance.
The morning’s breakfast event was no exception.

The pristine white test kitchen overlooking the blue waters of the Hudson River could have been anyone’s kitchen.
Except that it's not!
It's so very big – especially for a New York City kitchen space -- and was adorned with food and drink exquisitely composed as a, well -- to extend the Marie Antoinette analogy – like Sophia Coppolla’s visually stunning film-set homage to that other Queen of all-things-entertainment, and her fondness for elegant richness and sublime pastels and extraordinary edible narratives.

Here, at Martha’s kitchen, the center island was filled with the breakfast fare pastries, whipped white peaks of Greek yogurt a bucket of Moet & Chandon champagne for the morning’s mimosas.

Before the rather pleasant dilemma of whether to choose between two of the three mimosa offerings: a fresh blood orange or peach – Darcy said, “Why choose? Have both.”

And so there it was.  Clearly, Darcy is one smart cookie!
And a cake and candy guru – a McArthur Genius of all manner of sweet confections.
Why argue with this “It’s a good Thing” logic?
It was settled.
Blood Orange first, then Peach Mimosa. 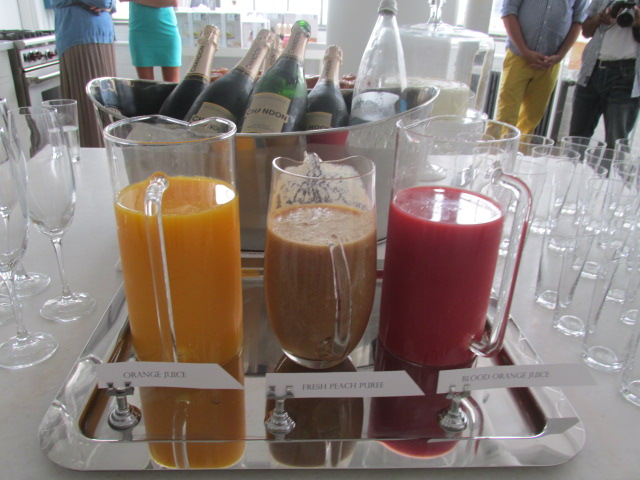 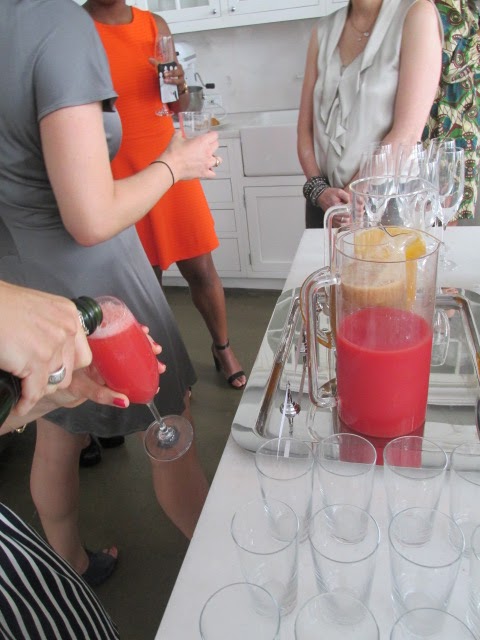 The breakfast pastries elegantly displayed on the center island were courtesy of Domique Ansell Bakery in SoHo.  You know them - the inventor of the can't-get-enough Cronut! People stand in line for hours for these treats!

The tiered treats of delicious, flaky croissants, almond monkey twists and cakes were enticing and tasty.
There was also a red velvet cake – under a cake stand, of course. 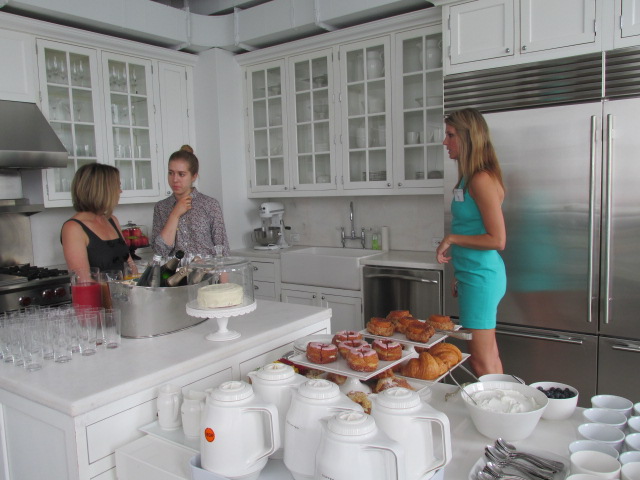 This was all backdrop for the stars of the show – the Fall Martha Stewart Cake Stand Serveware at Macy’s – available now in stores and on-line.

At key points around the kitchen island and on the kitchen counters were four themed compositions: 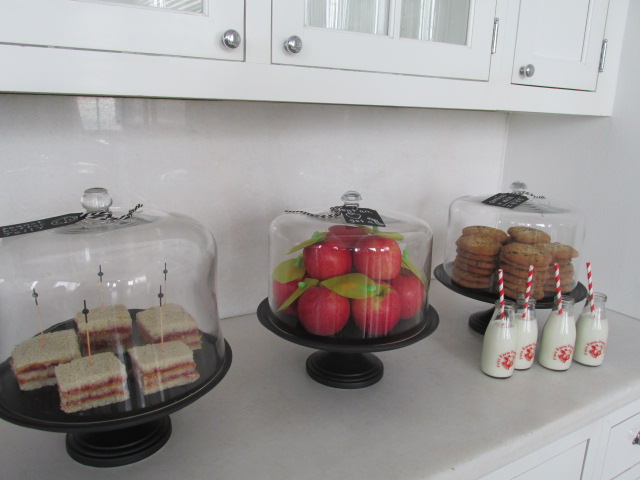 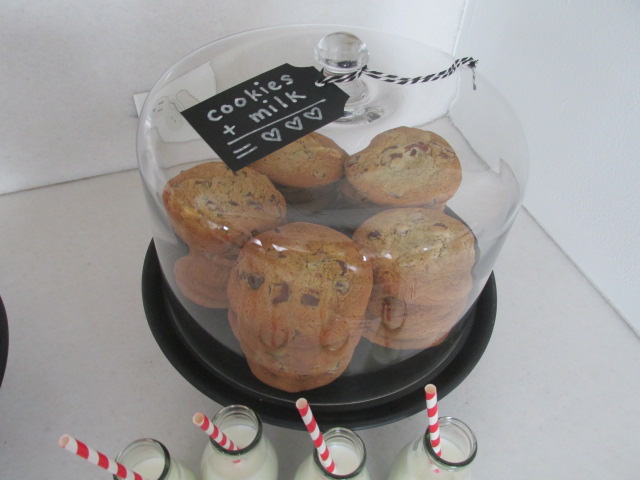 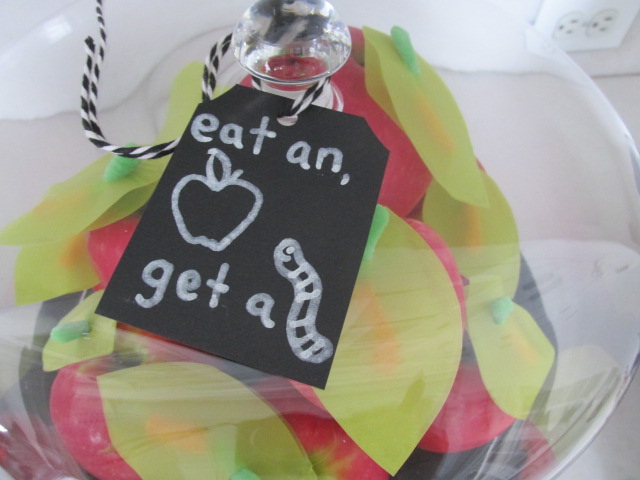 You can make these gummy worm tags with Martha DIY project: 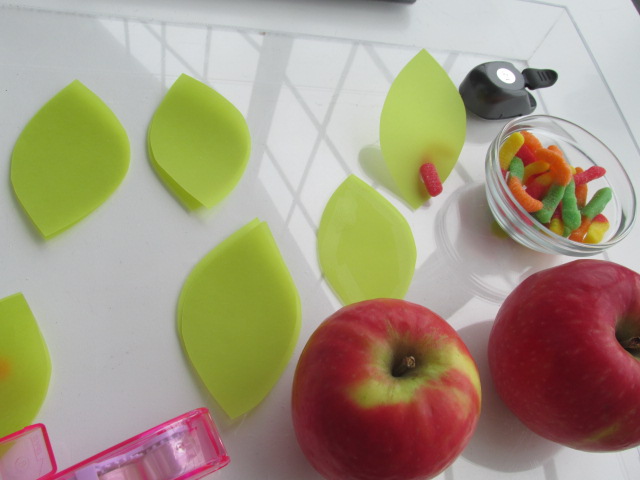 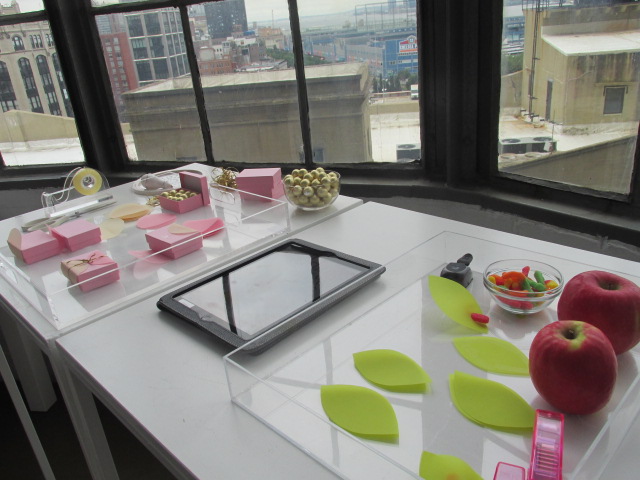 in sherbet shades of pink and peach were tucked inside large, white stemmed stands with brown fleur-de-lis scroll edging. 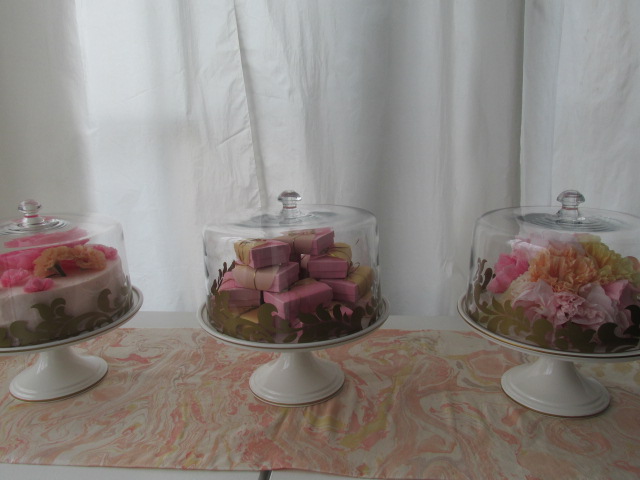 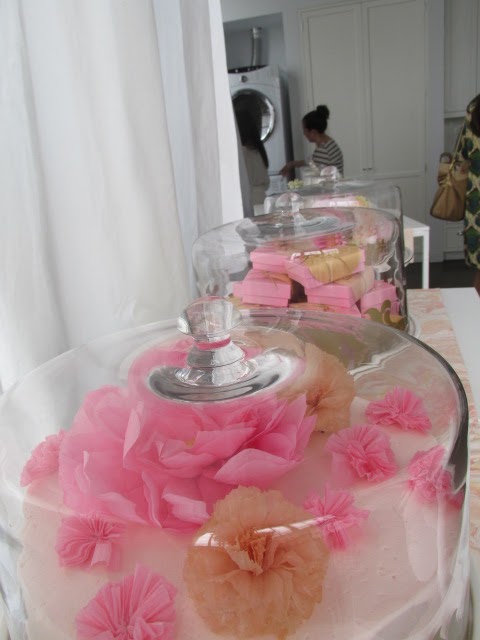 Summer Entertaining - The large cake stands of pure white with the scalloped edges inspired from Martha’s personal vintage collection and clear, glass domes, were filled with fruit, including magenta champagne grapes, green grapes and corresponding colors of Echeverria succulent florets in green and violet.  Simple and at the same time, drop-dead gorgeous.  And as Anthony Luscia, Special Projects Editor Weddings, explained, the succulents can stay fresh in the dome and on the counter without water throughout an event. 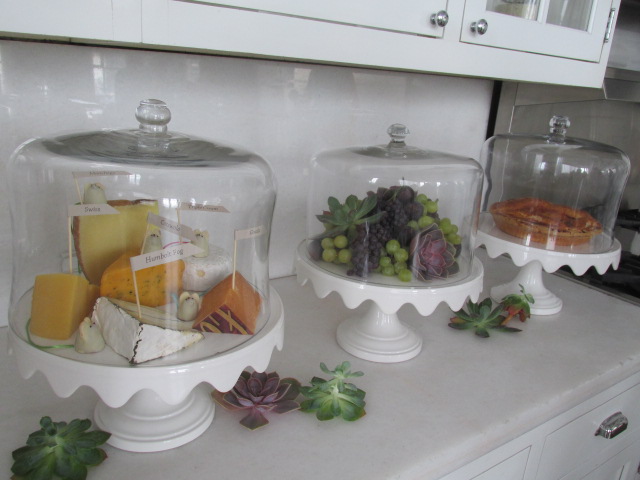 The other summer entertaining stand held a cornucopia of cheeses – a Stilton, with its median strip of blue, a colorful mix of orange cheddars and a wheel of goat cheese.
The cheese flag monikers were made and staked by the team and the cutest chocolate “mice” sat watch atop and amidst the cheese wedges for added whimsy! 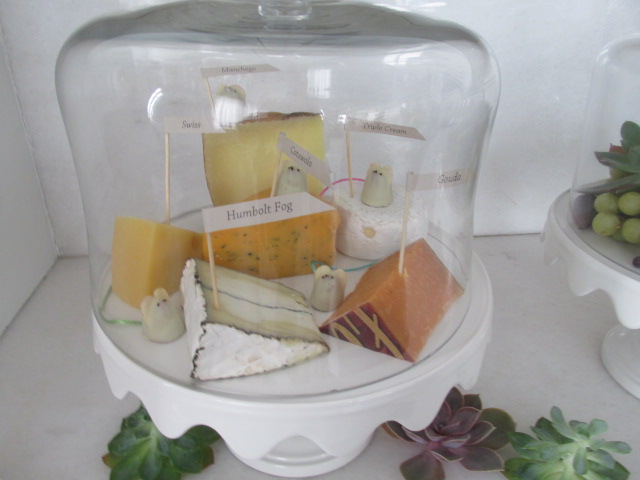 Baby Shower – Three mini white stands filled with lemon tarts, daisies and custard ramekins, surrounded by silver cups: baby mugs, and mint julep cups filled with charming chamomile so that the yellow flower centers seemed to smile back at the yellow food treats peeking out from under the diminutive glass domes. Sweet. It was precious and innocent and happy at the same time. 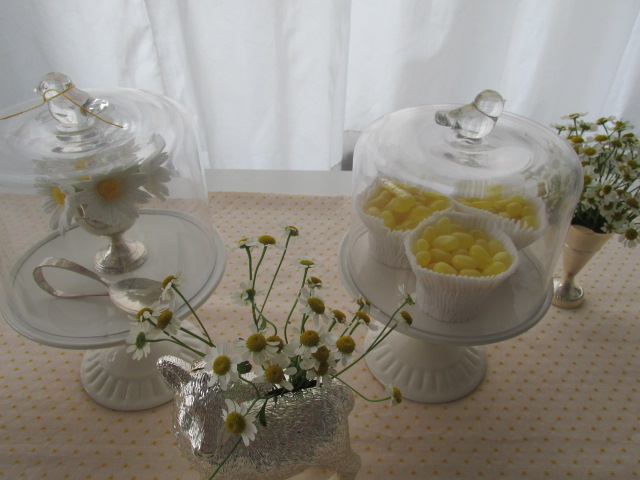 All the compositions and vignettes were designed to inspire creative use of the new Martha Stewart Collection Cake Stand – exclusively at Macy’s.

Giving flight to fantasy was a piece of cake for these talented entertainment and tablescape designers.

See, it seems that everything is better under the dome.
There is that aura of mystery… things just beyond reach. Glittering inside yet peeking back.

And there is also the very practical rationale of keeping food fresh and ready for guests.
Also, as Darcy and her team pointed out, cake stands can be centerpieces and gift holders at the same time.
Darcy has used sugar flowers as centerpieces sparklers under the dome.

In order to create kitchen style ambiance, I always have a display of lemons, limes or candy on cake stands poised on my stately and impossible sky-blue marble kitchen island.
The look changes, depending on season and what’s fresh.

Anthony explained how he and his stylists helped expand the concept of how to use the cake stands by using unexpected things on the stands.
What goes under a dome is special, precious and valuable, he noted.

It was the minis that stole my heart, though. In multiples, one can create an enchanting theme- changed up for the season or party theme.
They can be placed in an entrance hall as glamorous sentries.
Here I wrapped a mini plant in raffia and backlit it with flameless candle.  I could see this in multiples on summer dining table or hall entrance or.. 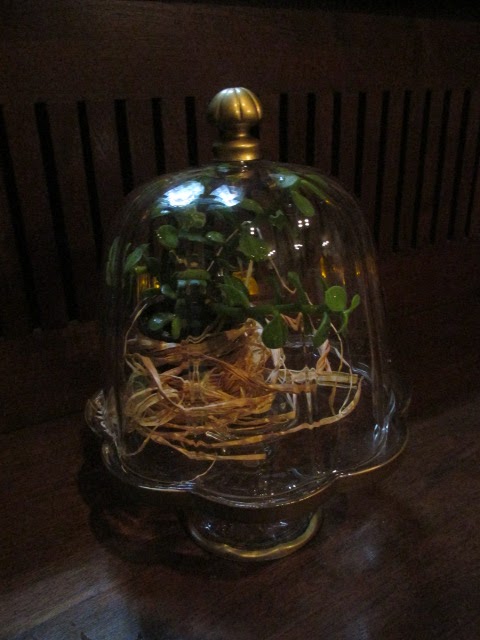 The smaller size is a muse for limitless creative concepts from food, to flowers to jewelry to fragrance bottles to ribbons to…

And that’s where the next, best part of the “Piece of Cake” event celebrating the Martha Collection sold exclusively at Macy’s gets even better.

Exclusive2
See, these design gurus have laid down the gauntlet to the exclusive press invited to the launch – and to their readers.
So, here is the challenge

Be inspired.
Create original and personal cake stand creations and/or concepts -- send them to me via email or post a comment here - text and/or images - for the opportunity to “win” a Macy’s gift card valued at $50.
Just send back thoughtful, artistic and beguiling ways to use the cake stands to display and entertain by the end of the week.
The judging will be done by my cracker-jack design team: me, myself and I!  ha ha!
Seriously, don’t miss a chance to take home some serious swag.

I selected the mini cake stand as swag to take home.
Once out of the box, sitting on the kitchen table, the diminutive display case seemed to wink back with a come-hither look on the glass kitchen table. So I selected a silk flower pin to nestle inside.  Sigh. Instant elegance. 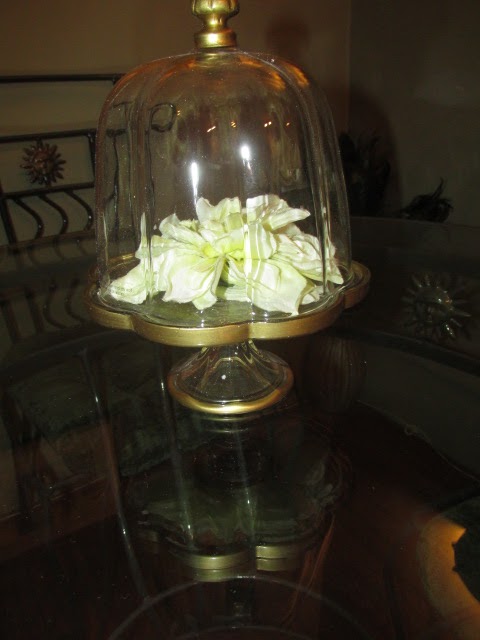 Later, I scoped out the Greenmarket for added display design cake stand haute-houseware elements. Below are a few ideas I will be sharing via Twitter and Instagram. Hope it inspires you.

All too soon, one is Cake Stand obsessed!
.
I'm looking forward to seeing the creative cake stand creative submissions. 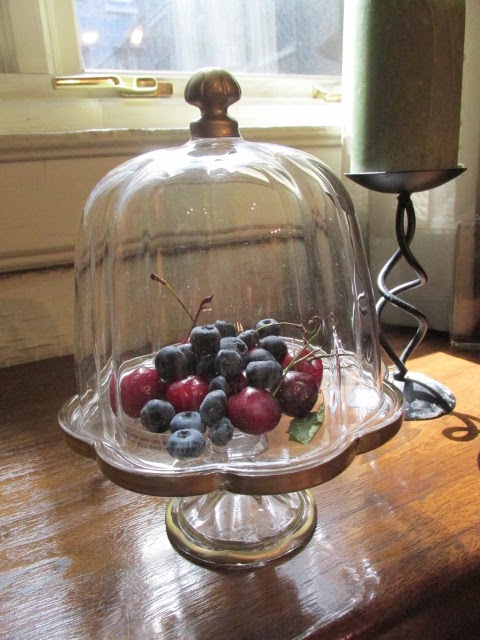 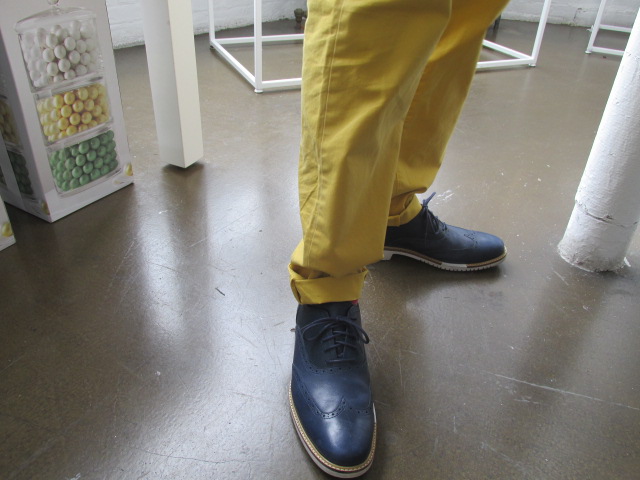 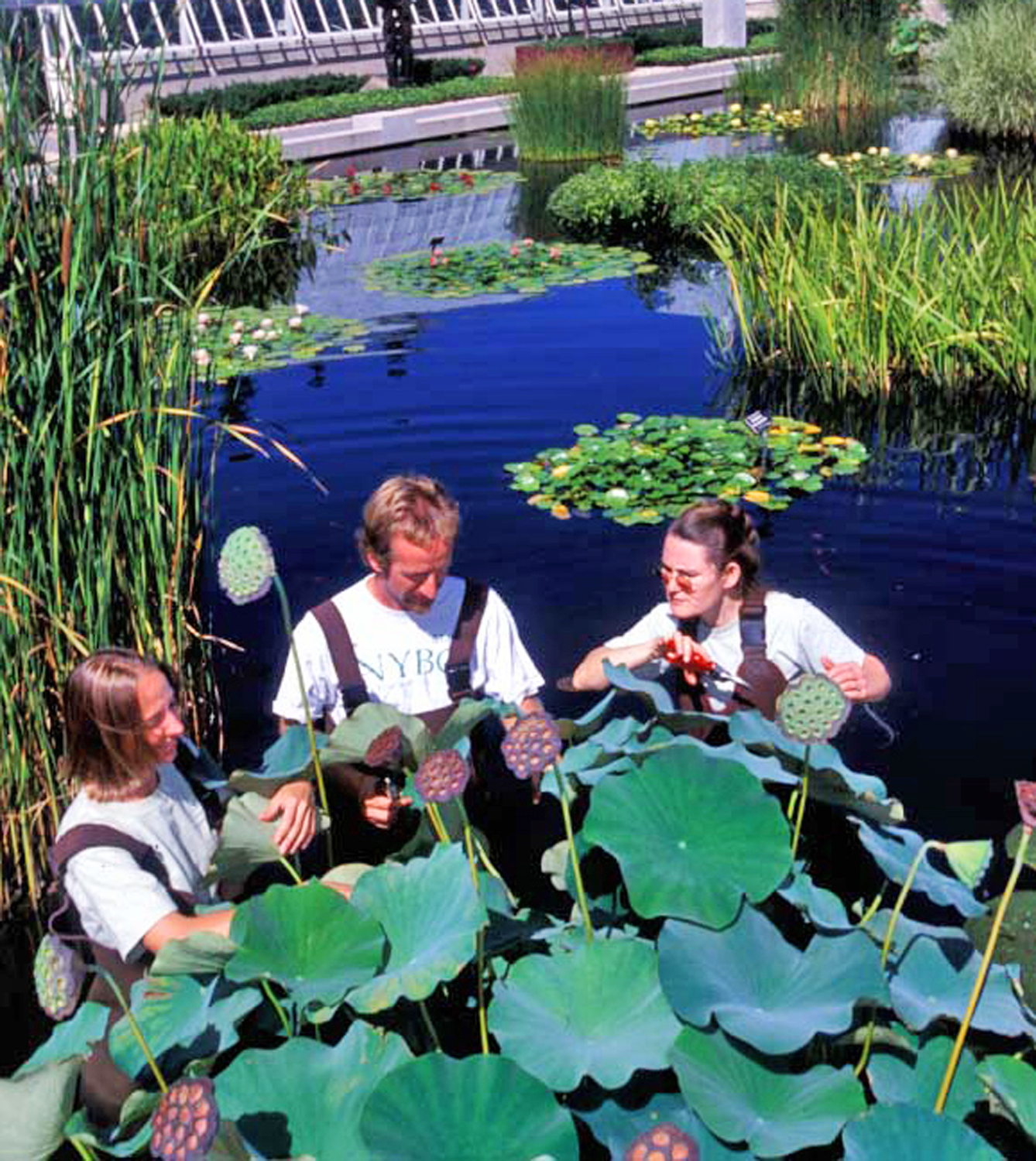 100 Anticipated Interns Show Horticulture is a Young and Growing Field

It     It doesn't seem all that long ago that my dear friend and "Hortie Hero,"  Charles Yurgalevitch, Director, School of Professional Horticulture at The New York Botanical Garden passionately discussed with me his desire to produce an event that would showcase Horticulture as an enduring career that excites and compels enthusiasm -- especially for youth.

Silicon Valley does not have a monopoly on young, creative, and enterprising career candidates!

We see this generation of farmers at the Greenmarkets.  We learn from them while they work the gardens at the parks and botanic gardens.

Charles' vision as I remember it, was to engage some Hort thought leaders to speak to the interns -- Ken Druse's name readily came up first. Ken had recently written a great article about the Next Generation of Horticulturists and it was inspiring on so many levels.
http://www.organicgardening.com/living/the-new-generation

S
S    Charles also expressed a point of view that to help nurture these budding green industry celebrities, they needed a community - an event to share their hort knowledge and passions and issues and their visions -- and so his "Hortie Hoopla" was seeded. And what better place than the New York Botanical Garden to host this premiere horticultural event?
S
So in less time than it takes to design a seasonal garden display, Charles had his vision approved, a template for the day's agenda that came out almost fully formed: an all-star Hort expert lineup of presenters and lecturers, NYBG curator-led tours of the collections and gardens - including the Forest, Native Plant Garden, Azalea Garden, Conservatory and so on; followed by food and drinks (he was thinking BBQ or sub sandwiches in the farm setting that is the Ruth Rea Howell Family Garden.  Nice homegrown comfort food. No stuffy social event here!
And as you can see from the final agenda below that is the media alert, it all came together as he envisioned. Even the food and drink made it to gathering, generously provided by Organic Gardening Magazine, Town and Country Gardens and Landcraft Environments.  Cheers to the sponsors.
The metro area Hort network provided Charles with the metrics of approximately how many green industry interns there are working in our green spaces including The High Line, Brooklyn Bridge Park, The Battery Park Conservancy and Central Park, to name a few.
And just like that, it all came together.  Everything was finalized before Charles left on a study and research trip to the UK's Royal Botanic Garden Kew, Royal Horticultural Society  and the Royal Botanic Garden in Edinburgh.  Here he was working to produce an exchange program for his NYBG School of Professional Horticulture students in the near future.
Surely, Charles is the next generation's green industry garden angel!

If you, or someone you know is a green industry intern, please let them know about Wednesday's event. Details below.
Make Green History and attend the Hortie Hoopla Premiere.


News from the Botanical Garden:
I
The New York Botanical Garden will host the first-ever New York metro area “Hortie Hoopla!”- a field day for “green industry” interns on July 24, 2013. Nearly 100 interns working at parks and gardens across the NYC-area this summer will meet up at the Garden for this day of learning, camaraderie, professional development, and a bit of fun. Professionals working at the many parks, gardens and horticultural institutions in the NYC area will also be on hand to share ideas and experiences about their summers in horticulture. The Garden’s own curators and horticultural experts will offer tours of NYBG’s magnificent 250-acre grounds and offer interns insights about careers in this important profession. 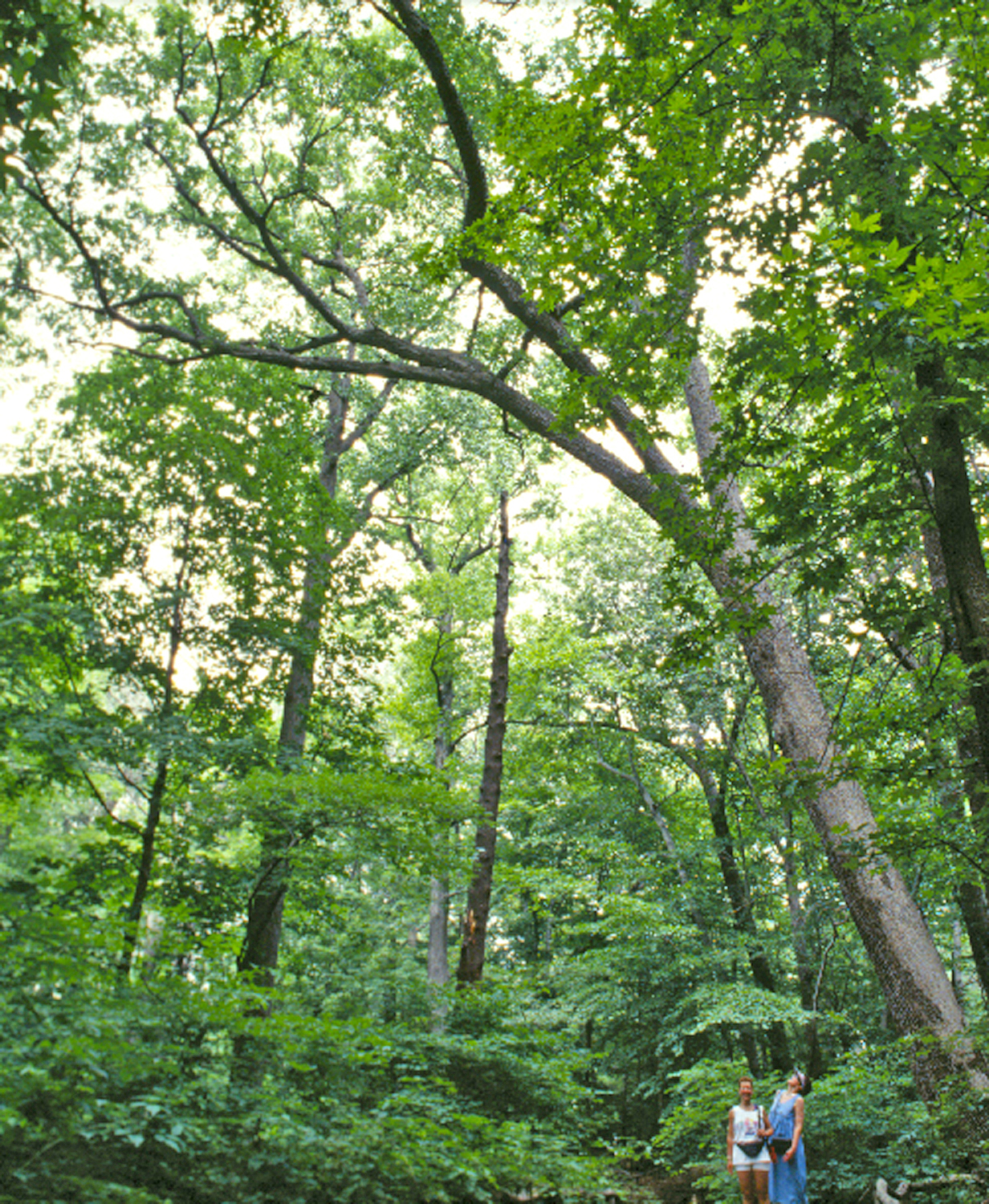