Culinary sprites must’ve been whispering “Variety is the spice of life” into the ears of executive chef Bill Telepan lately. In fact, when one learns of his very diverse and robust schedule of commitments, you think surely, there must’ve been a host of culinary doppelgangers. Or two of Chef Bill.

Since landing at the coveted top spot at Oceana - one of Gotham’s enduring, fine-dining classic restaurants some 18 months ago, Chef set about to migrate his pioneering reputation for creating cutting edge farm to table dishes that by and large starred meat and vegetables - to a seafood emporium. And one with a lauded seafood legacy to boot.

But truth be told, Chef Bill had the seafood bona fides. Just ask his loyal customers from his namesake restaurants, Telpan and Telepan Local, who made his Smoked Trout and Lobster Bolognese two of his signature dishes. He’s since added these two stalwarts to Oceana’s menu.

Plus, his experience working at Le Bernardin, the temple of seafood cuisine; along with his early support working with Dock to Dish and its commitment to sustainable seafood, demonstrates he knows his way around food from the water: fish, shellfish, roe, mollusks, river fish, crustaceans, and edible sea plants.

The variety of edible aquatic food is astonishing when you think about it. Seafood’s taxonomy ignited Chef Bill’s newest menu creation: The Telepan Saturday Series at the Oceana Raw Bar.

Besides the show-stopping tableside theater of deboning a porgy or serving a classic Dover Sole, or Tuna Wellington, the Tasting Menu promises award-winning theater as well.

Chef Bill described how they’ve been running a kind of road show for the last few weeks for family and friends to work out the process and test drive the 14 course, three-hour extravaganza.

Kicking off this Saturday, April 28, you’ll be able to enjoy a rather one-on-one dining experience with Chef Bill and his team.

This is worth the price of the ticket alone. Chef Bill is irrepressible -- and he’s a sparkling conversationalist. Just ask him about the Wellness in Schools program or the volunteer work he does. Oh, but I’m getting ahead of myself.

Chef Bill said he missed that one-on-one interaction with his “family of customers” but now he’s having his shrimp, and eating it too, if you will. Meaning his Tasting Menu at Ocean is both grand and intimate.

He describes how guests at the raw bar will watch as Chef and his cooks prepare and serve the fish - by and large omakase and sashimi style little plates.

There’s a kind of seven-inning stretch designed into the Tasting so that guests take a break and then follow him - Pied Piper like - to the open-area kitchen to watch the culinary team prepare and serve a hot course - before heading back to the Raw Bar to complete the tasting.
The Tastings are scheduled to run Saturdays throughout 2018. Costs are $175 per person (excluding tax and gratuity); $95 per person optional beverage pairings (excluding tax and gratuity)

For more information and to reserve, contact at: 212-759-5941 or reservations@oceanarestaurant.com

Chef Bill explained how there is indeed a seasonality to fish -- the “fin to fork” mirror to his passion for “farm to table.” Bay scallops, sea urchins, and oysters for example, follow the cool or warm water ocean streams.
And then there’s soft shell crab season from May to September when the crabs molt.

And while there’s a more traditional fish lover who can’t get enough salmon, the menu will provide adventure too, with Sea Urchin, Red Shrimp from Italy, and one of my favorites: fresh anchovies, along with smelt and octopus. Of course, they’ll be serving a variety of oysters sourced by season from around the globe.

The Tasting Menu show is an exciting culinary performance that is sure to have a long run.

And the daily restaurant menu will change out with the seasons. That’s four times a year; climate chaos notwithstanding. 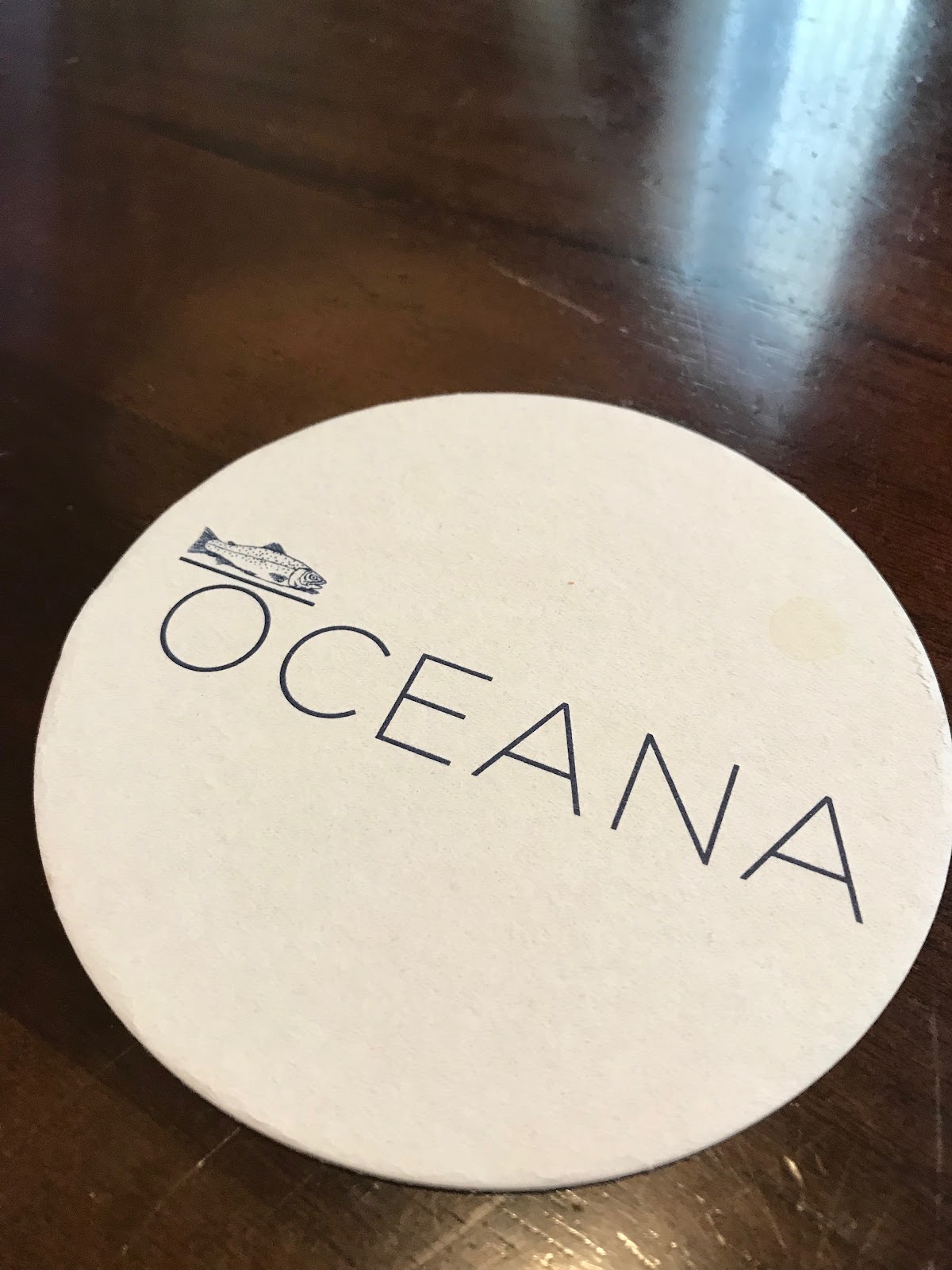 Because Chef Bill can keep all those plates spinning (even those small tasting ones), despite his move to a big restaurant that does more than 600 covers a day, he continues to work with the Wellness in the Schools (WITS) program that aims to end childhood obesity.

Ever since he first got involved to work with WITS’ founder Nancy Easton in 2005 at a parent/teacher conference at his daughter’s school, Bill’s roll-up-your-sleeves attitude prevailed when he inquired, “How can I help?”

He began doing what he does best: cooking and teaching how to cook. The three-year program offer a twice a week hands-on teaching session to the children so they learn to cook healthy with real ingredients. WITS says, “We work with schools to transform the cafeteria menu, train school staff, and provide nutrition education to students.”
WITS also offers Coaching so that children get out and play at recess with an informed fitness education program.

Chef Bill described further how the program works with edible school gardens and urban gardens and farms to stock the WITS recipes and menus.
WITS has grown from their initial three schools to 122 schools in four states (NY, NJ, FL, CA), according to Chef Bill.

Recently, WITS hosted their annual fundraiser; this year it was at the IACP building and featured lots of star power and great eats. Fun eating for a good cause. And you can still donate...

Sustenance
Getting tired yet? Over what now seems a much-needed cup of coffee, Chef Bill continued. This chef is impressively indefatigable!

I asked him about his recent work with The Institute of Culinary Education (ICE) as their Director of Sustainability.


In fact two of his culinary hat tricks are coming together for an event at ICE on May 14th where Bill and Chef Wylie Dufresne will offer a cooking class to support WITS. These are two of my favorite chefs, to say the least, and their whimsical, fun, personalities are sure to make this cooking class a rare opportunity.
Overall, Chef Bill’s work with ICE and their students focuses on developing curriculum and to implement zero waste practices in the kitchen. They do this by honoring the ingredients and using everything to create new dishes that turn cuttings and pairings into “Scrap Soup,” for example. Or butchered lamb scraps into Lamb Sliders. In addition to emphasizing the importance of using everything edible in new ways to save on costs and boost margins, there is a focus on using culinary creativity to design new recipes.

In addition, as Director of Sustainability, Chef Bill coordinates with the students and the ICE Hydronic Garden there operated by Farm One to grow and use fresh herbs and greens.

Whew! Three major jobs. One man. And if that wasn’t enough, as we concluded the interview and I waited for a fellow Homegrown, foodie friend, Nancy to enjoy Oceana’s oysters and wine, Chef Bill stopped to say goodbye before he headed out to support City Harvest - my volunteer organization’s gala that night!

We need a "second helping" of this outstanding chef, please.

Posted by Garden Glamour at 1:52 PM