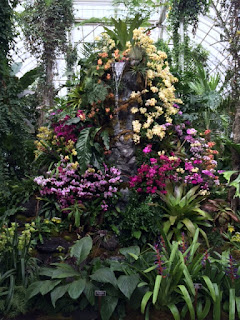 Let’s just stop pretending that anything other than beauty matters when it comes to orchids.... Just like any of us who have ever been hopelessly in love, we all swoon when seeing a truly irresistible romantic. Here, at The New York Botanical Garden's orchid show extravangza, there are rainbows of colors, the (good) fragrances, and the incredibly, intricate forms or shapes of an orchid to capture our hearts desire. Plus there is something so inextricably intimate about the orchid blossoms. They are seductive. They draw you in - not unlike their unwitting pollinators. (More on that later - but according to Marc Hachadourian,  Director of the Nolen Greenhouses and Curator of the Orchid Collection, on a pre-event tour of the Orchid Show,

"Most, if not all of the orchid's pollinators, prefer the flower to the female."  Sexy...

We “lean in” to see and smell and admire these exotic plants. They captivate us like no other plant for any number of reasons. So, I’ll let their elegant beauty tell the story. 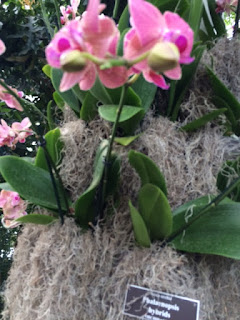 I was honored to again have an invitation from New York Botanical Garden (NYBG) - (and disclosure, I once worked at the Garden) to attend the 14th Annual Orchid Show. I remember the initial thinking and strategy behind the Orchid Show exhibit. What a blockbuster the Orchid Show has become. This year all exhibits will be, in some way, an homage to the Garden’s 125th Anniversary.

First up: the beauty. As NYBG noted in their background material: “The 19th-century craze sparked by a single orchid bloom, which came to be known as Orchidelirium, is the inspiration for The New York Botanical Garden’s 14th annual Orchid Show, which opens on February 27 and runs through April 17, 2016. Visitors to the landmark Enid A. Haupt Conservatory will be transported on an epic journey that engages all of the senses and underscores the allure and intrigue of these exquisite beauties.

Thousands of orchids in a stunning array of colors, sizes, shapes, and textures will be showcased, highlighting the far-flung adventures of daring explorers who risked life and limb to secure these captivating and exotic flowers from danger-laden jungles around the world for determined collectors. From its origins in England as a symbol of power, wealth, and opulence, the frenzied fascination with orchids underpins the exhibition, which illustrates their transition from the wild to their display and cultivation as well as the Garden’s important role in their conservation today.

And seeing the displays today and with regard to the background information on the Garden’s impressive work to conserve and preserve orchids, I feel there must have been an interloper of sorts listening to a conversation about the upcoming orchid show on a return train trip from the Garden not that long ago with fellow horticulturists. I was detailing how I wished the Garden could could showcase the orchids they’ve respectfully taken care of all these many years - as part of the their abundant role as a designated Plant Rescue Center. So I was thrilled to read this paragraph from NYBG. Maybe in future years we can all view these rescue orchid plants and learn their stories as told from the “bad” plant hunters. There’s a lesson here for all…


"Orchid exploration today is inextricably tied to conservation efforts to preserve species in the wild. Since 1990, The New York Botanical Garden has been a designated Plant Rescue Center, charged with nurturing and bringing back to health orchids that have been collected illegally in the wild and seized at international borders through the Convention on Illegal Trade in Endangered Species (CITES). NYBG’s orchid experts, Matthew Pace, Assistant Curator of the Herbarium, and Marc Hachadourian, Director of the Nolen Greenhouses and Curator of the Orchid Collection, are at the forefront of modern orchidology and conservation. "  Yeah!! 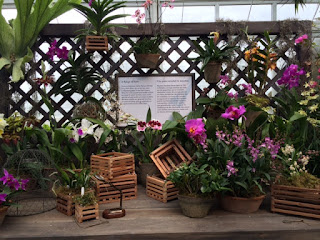 NYBG will tell you, "Orchids belong to the largest family of flowering plants, with more than 30,000 naturally occurring species. NYBG’s celebrated permanent orchid collection represents all of the floristic regions of the world, including Australia, Africa, South America, and Madagascar, and this exhibition will showcase some unusual and rarely seen gems. Specimens of the spectacular Psychopsis papilio, which inspired the Duke of Devonshire’s obsession with orchids that contributed to Orchidelirium in London, will be on view along with Paphiopedilum sanderianum, named for nurseryman Frederick Sander, the self-proclaimed “Orchid King,” renowned for the remarkable length of its petals."

Aesthetic delights in the Haupt Conservatory begin in the Palms of the World Gallery’s Reflecting Pool, which will be festooned with a plethora of bold orchids in pots and delicate orchids perched in trees. Proceeding through the exhibition, visitors will be treated to displays of thousands orchids as they grow in the wild, in much the same way the Victorian-era explorers first encountered them in their travels through tropical habitats around the world— cascading from branches, nestled in crevices, reaching up from under rain forest trees. To create this irresistible world of fragrance and color, NYBG horticulturists assemble thousands of flowers from the Garden’s research collections as well as the finest growers across the country. From the rare and oldest to the unusual and iconic, orchids of seemingly every conceivable color, shape, and provenance will be on display.

Moving on through the Conservatory galleries, you’ll learn about the transition of orchids from growing in the wild to cultivation in the greenhouse. The trendsetting Duke of Devonshire began collecting orchids in 1833 at his Chatsworth House estate. His head gardener, Joseph Paxton, revolutionized the way orchids were cultivated in England by innovating larger and more effective glasshouses, beginning with the Great Conservatory there and culminating in his masterpiece, the Crystal Palace of Prince Albert’s Great Exhibition in London in 1851. 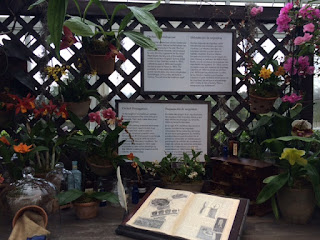 A series of vignettes will evoke the dazzling glasshouse displays that the Duke and other obsessed collectors went to great lengths to create with their newly acquired prized specimens brought back by hired hunters, who often endured shipwrecks, animal attacks, and even fatal competition among other hunters.

Antiqued, staged potting benches with specimen orchids of strange and rare species will be featured. Hanging pots, baskets, and Victorian walls containing a diverse selection of orchids from around the world combine formal features with less formal plantings to achieve a lush and enveloping glasshouse environment. A small stone patio will accommodate a stunning Wardian Cases (an early type of protective terrarium for plants that was used as a method of transporting and displaying the orchids) housing a selection of miniature orchids. 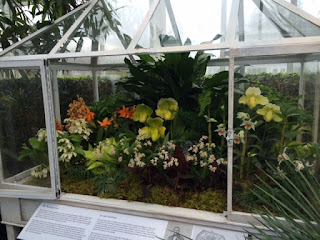 Also highlighted throughout the exhibition will be fellow British horticulturists and collectors such as James Bateman, whose beautifully illustrated manuscripts contained detailed renderings of orchids and vignettes depicting New World Spanish colonies. Oakes Ames, the great American botanist and NYBG Patron, traveled the globe with his wife, Blanche, who illustrated their finds. Ames donated his important collection to NYBG in 1906, and several rare plants will be on display.

The Orchid Show: Orchidelirium is designed by Christian Primeau, who oversees the extensive tropical/subtropical plant collections housed in 11 unique environments in the Conservatory. Marc Hachadourian curates the exhibition’s orchid selection and NYBG’s extensive groupings of living plants from around the world housed in the Nolen Greenhouses, the behind-the- scenes glasshouses where plants for the Garden’s indoor and outdoor displays and science program are grown and maintained.

Don't miss this enchanting orchid display.  In the meantime, enjoy this magical orchid hillock display in the video I shot at the preview:


Event Details:
The Orchid Show: Orchidelirium will be on display as NYBG marks its 125th Anniversary from February 27 to March 17th.
Plus:

One of New York City’s most romantic date night activities, Orchid Evenings start at 6:30 pm and include a complimentary cocktail. On select evenings, visitors can also upgrade to V.I.P. status and enjoy an Orchid Lounge.

 § In partnership with the Poetry Society of America, Poetry for Every Season: Ada Limon features poems in the landscape celebrating spring, flowers, and beauty.

§ World Beat: Music and Dance Around the World of Orchids brings live performances from cultures around the world on Saturdays and Sundays throughout the exhibition.

§ On weekends during the exhibition, orchid care demonstrations with topics such as “Easy Orchid Care,” “Fantastically Fragrant Orchids,” and “Orchid Tips for Amateurs” show visitors how to care for their own orchids.

§ Cell phone/Mobile or Smart Phone tour stops at NYBG Shop will be available to provide answers to frequently asked orchid questions and allow visitors to dial up care tips on watering and feeding, reblooming, and repotting for several specific types of orchids. Thousands of top-quality orchids, from exotic, hard-to-find specimens for connoisseurs to elegant yet easy-to-grow varieties for beginners, are available for purchase at NYBG Shop, along with orchid products and books.
Posted by Garden Glamour at 9:07 PM