All that Glitters is not Fireworks: Independence Day Sparkles in the Garden - and Above -- for 4th of July

It was a true Yankee Doodle Dandy of an Independence Day holiday.

Not unlike Dorothy and her trusted traveling companions: the Tin Man, Scarecrow, and Lion - who land in Oz and go through a day of spa-like primping ("Snip, Snip, Here; Snip, Snip There") the gardens throughout our country house neighborhood are pruned, plucked and readied for that most outdoor of holidays, Independence Day.

There is literally a buzzzz that permeates the neighborhood as the trimmers and blowers orchestrate their tasks.

Our garden is managed in a decidedly less buzzy way -- more hand clipping, weeding, and planting.

Along with a lot of client garden design and work, I managed to squeeze in, er, work till after dusk, more than a few times in order to be ready to showcase our gardens and greet our guests for our annual Independence Day Fireworks party we host there.
The fireworks are set off in the marina below us, as part the annual Fireman's Fair.

This year the Fireworks were scheduled for the same night as Macy's NYC.
Usually we get to view those spectacular sparklers from our perch; however this year they were the backdrop to our display.
But I'm getting ahead of things…

I have designed a number of garden rooms at our Garden State home: the arbor; the water garden, the new front border, the terrace herb garden, the shower garden and the Farm-ette and Compost Cabana.

Later I will detail the design process.

Here, enjoy the scenes of a garden-inspired 4th of July.

I had to trim the Coral Bark arbor again even though I just did it in late May - but glad to do it as it means the tree has covered the rebar - no more waiting for the limbs to streeettch to meet each other.
The red-twigged dogwood fronts the arbor and it too needed to be pruned again - after blooming.
Right after the roses bloomed in June, I sheared them for a second bloom that starts up right around fireworks time.
Due to the October flash frost and a late April one - the macrophylla hydrangea will not bloom this year.  I waited as long as I dared - and given the green growth coming from the bottom of the plant - I gave in and cut the old wood, spent buds still on them.  At least the hydrangea are alive and thriving.
I did the same for my garden clients.

The arbor is red roses and red hydrangea in the summer and all red bark against the white snow in the winter. Gorgeous in every season. 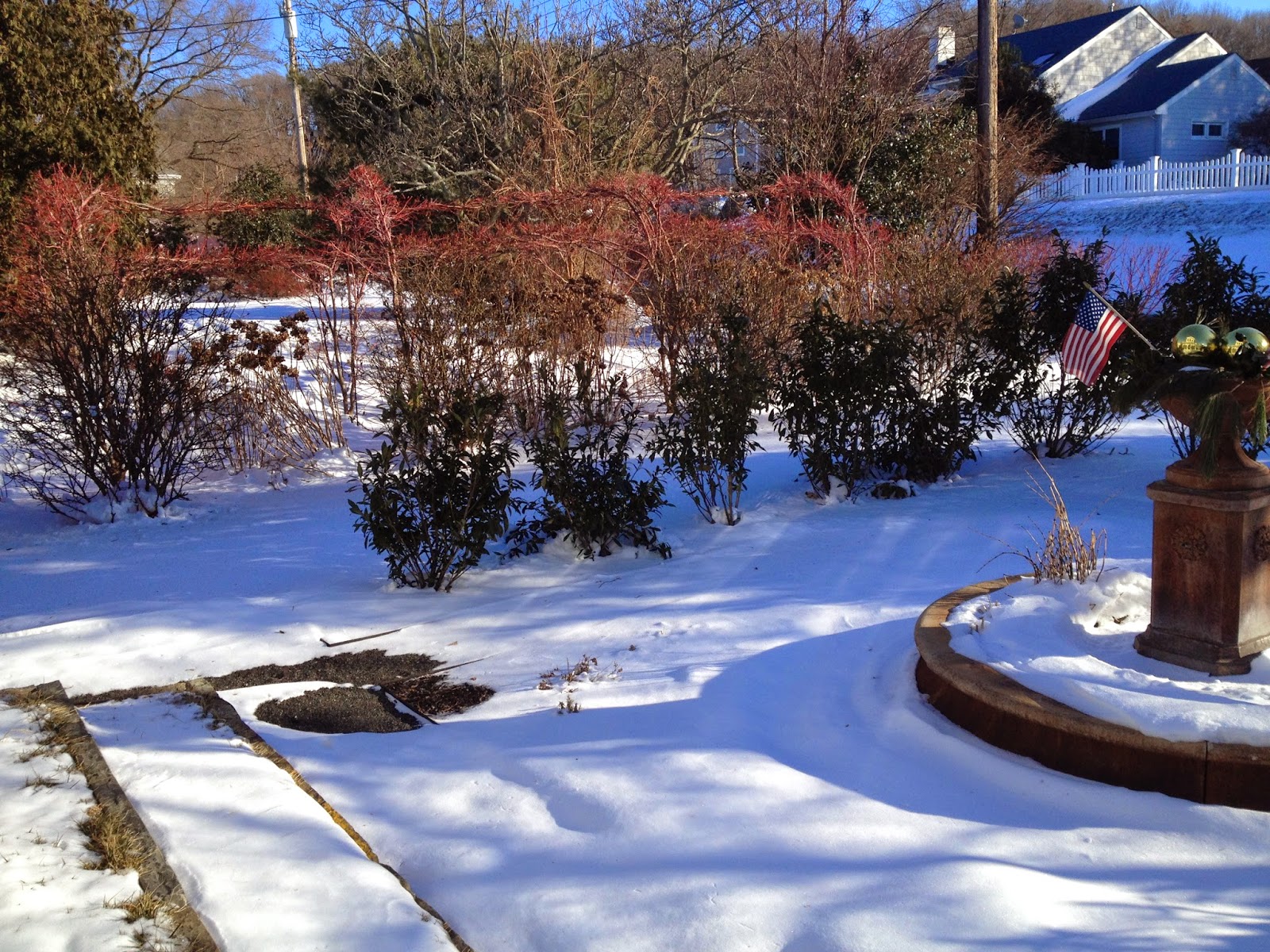 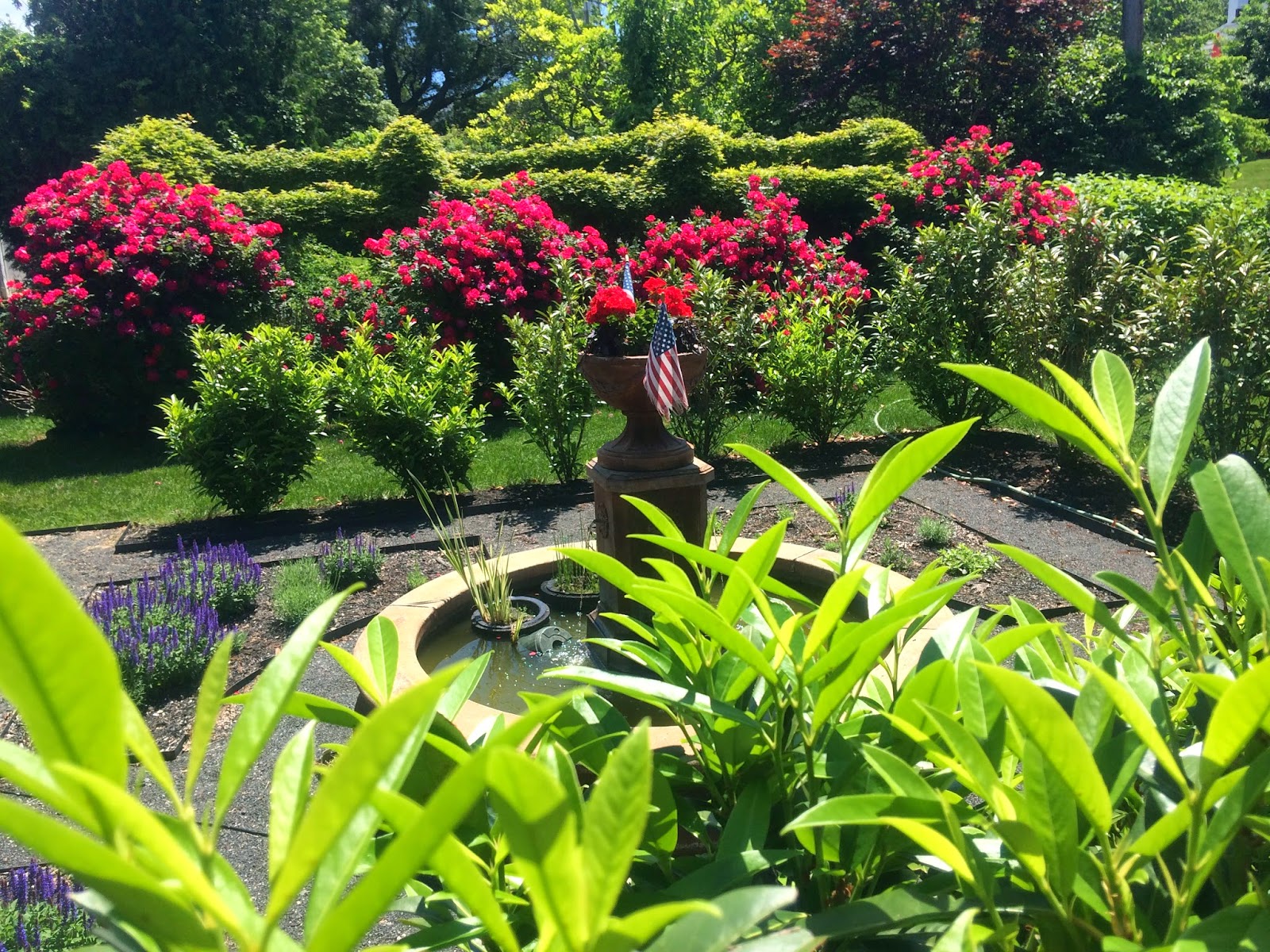 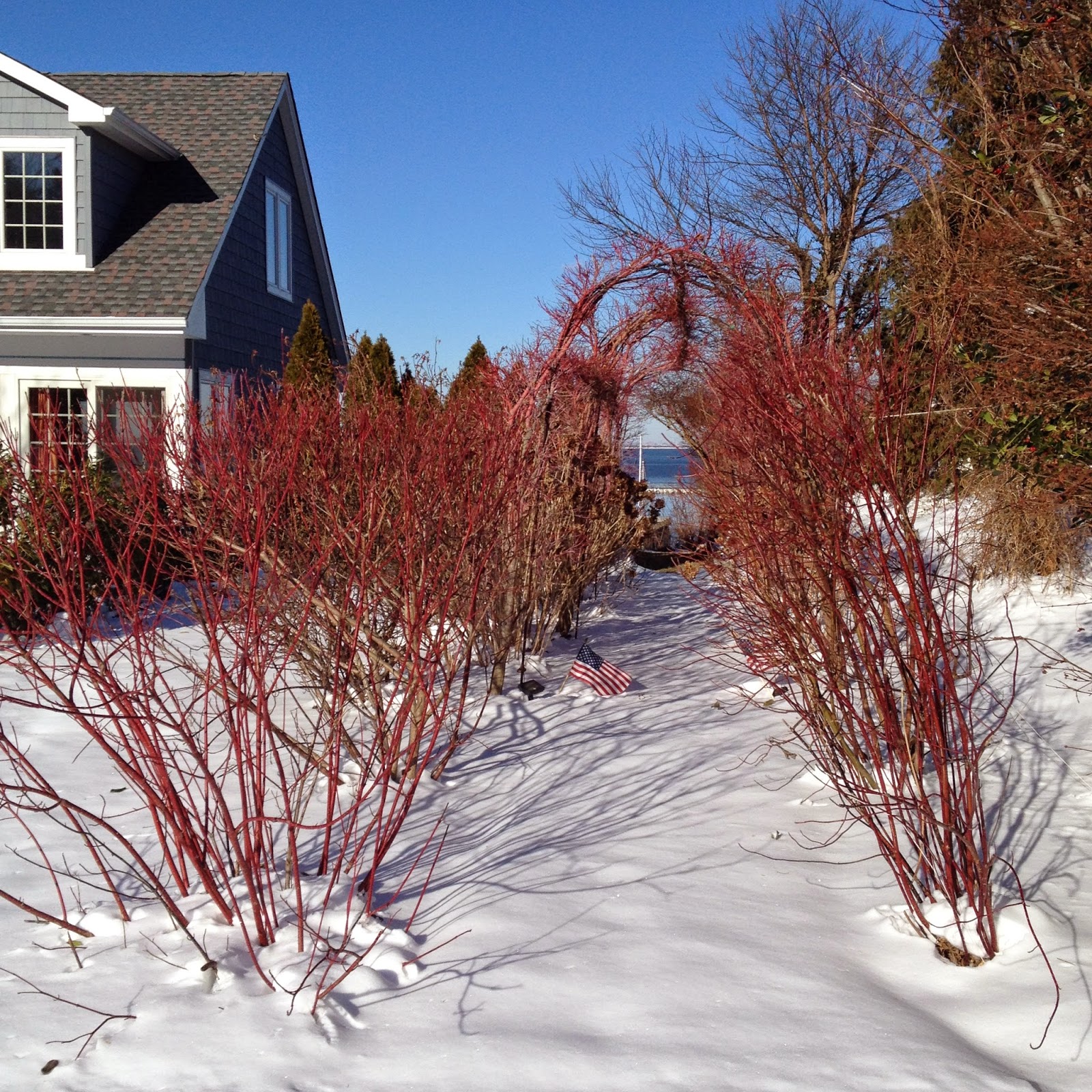 This season, I planted mini box around the parterres in the Water Garden and added more lavender.
I also planted liriope around the outside border of the cherry laurel that frames the water garden.
Here too the shrubs experienced early spring frost issues.  We removed every brown leaf.  It made a big difference.
The fish survived the Polar Vortex just fine.
I over wintered one lotus. It did fine and will overwinter the two I bought this year. 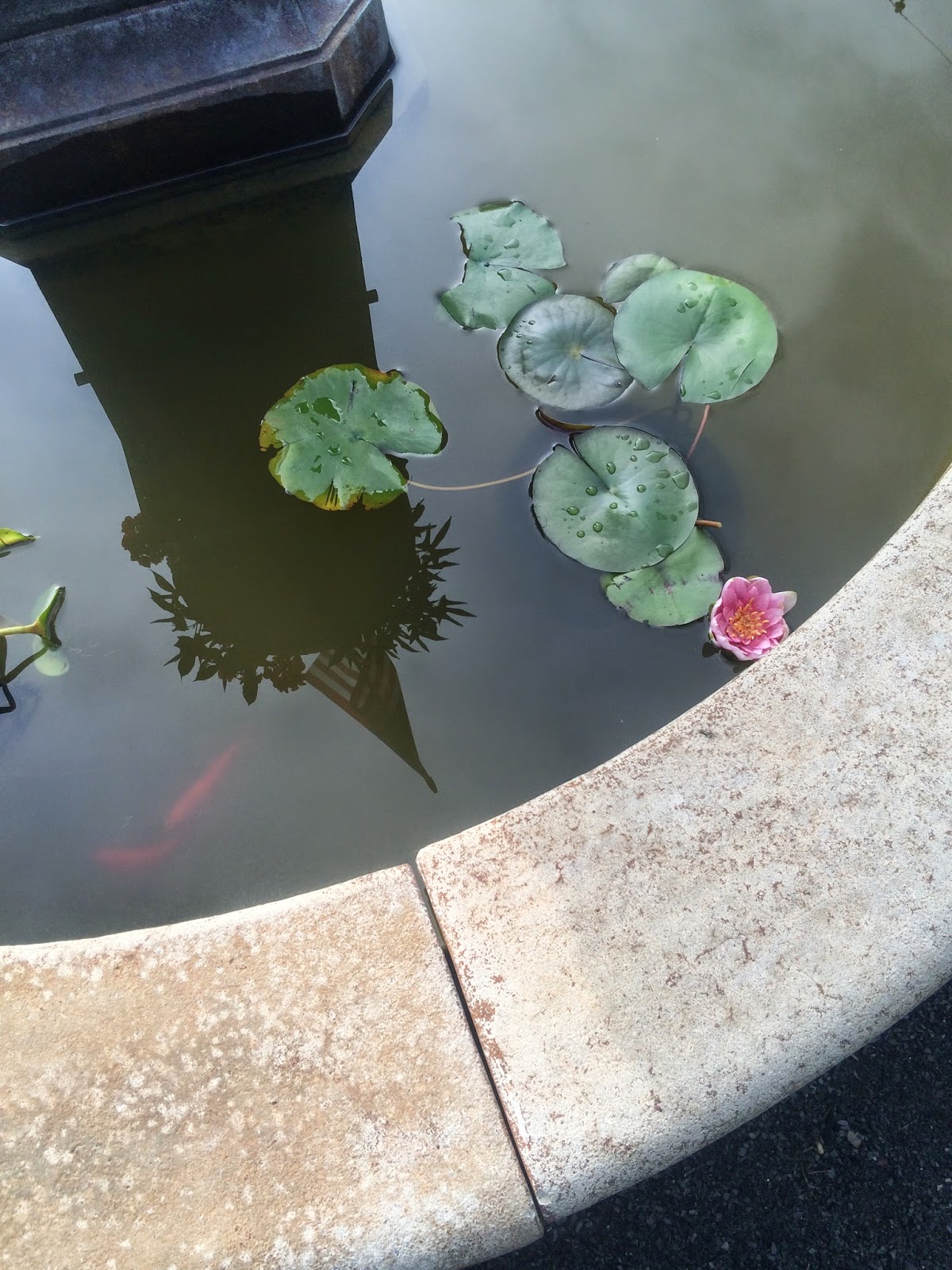 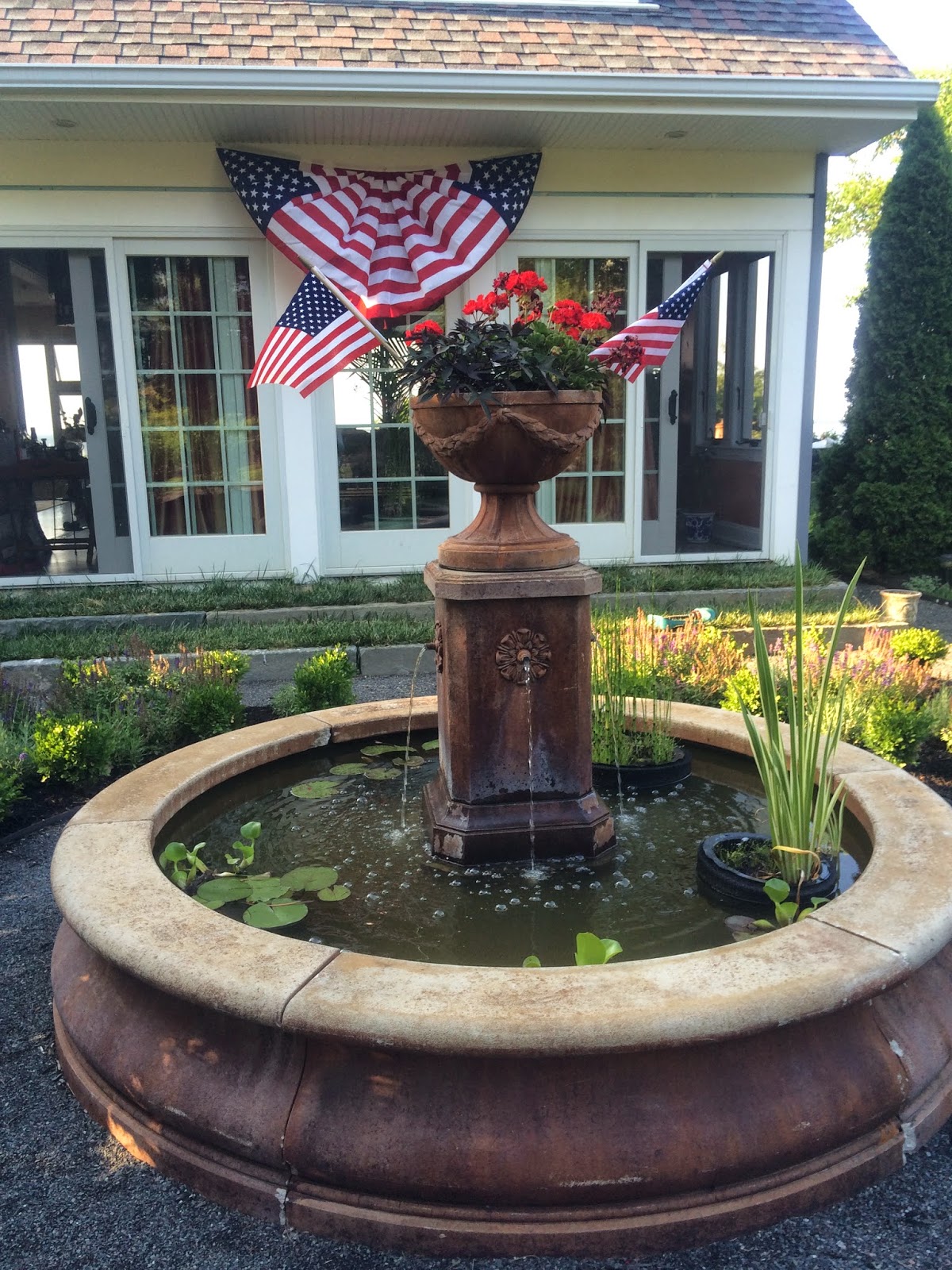 The Party
Soon enough it was time for the Fireworks party.
The BBQ was ready, the food was set out, the hostess drinks ready - along with the beer, wine, martinis!
We played host to the best guests this year -- along with family from near and far as in the Tarheel state, there was Joanne Trout (whom I adore and have worked with forever) and her beau, Mike, along with EunYoung, of tea ceremony and Randalls Island rice-growing fame (and ceramics and Eni Puzzles and… too talented just for one!) EunYoung and I worked together designing and doing Fine Gardening with my Duchess Designs.
It's an honor to know EunYoung.
She brought a very special guest with her, Koichi-San from the Japanese Consulate.  Double Honor!  He raved about Bill's "skill at the grill" and said the hot dogs were the best ever and the burgers were tied for the top with Gramercy Tavern's!  I cannot wait to tease my culinary friend: executive chef, cookbook author, James Beard award-winning chef and co-owner of Gramercy, Chef Michael Anthony -- ha!  I will challenge chef to a burger cook-off!

And the birthday cakes.  It's Mother's birthday July 3 so we celebrate this firecracker's special day every year after the fireworks display -- it's all for her, really :)
This year my niece, Marissa, visited with her beau, - oh wait - that's her sister Lauren's husband's name: Beau.  Marissa's beau is Ed.  Now that that's all straight - ha.
Anyway, Marissa's birthday is July 3 also so two firecracker celebrations this year.
Marissa chose a gorgeous chocolate shell-strewn cake from James Beard award-winning chef Marie from the Flaky Tart. 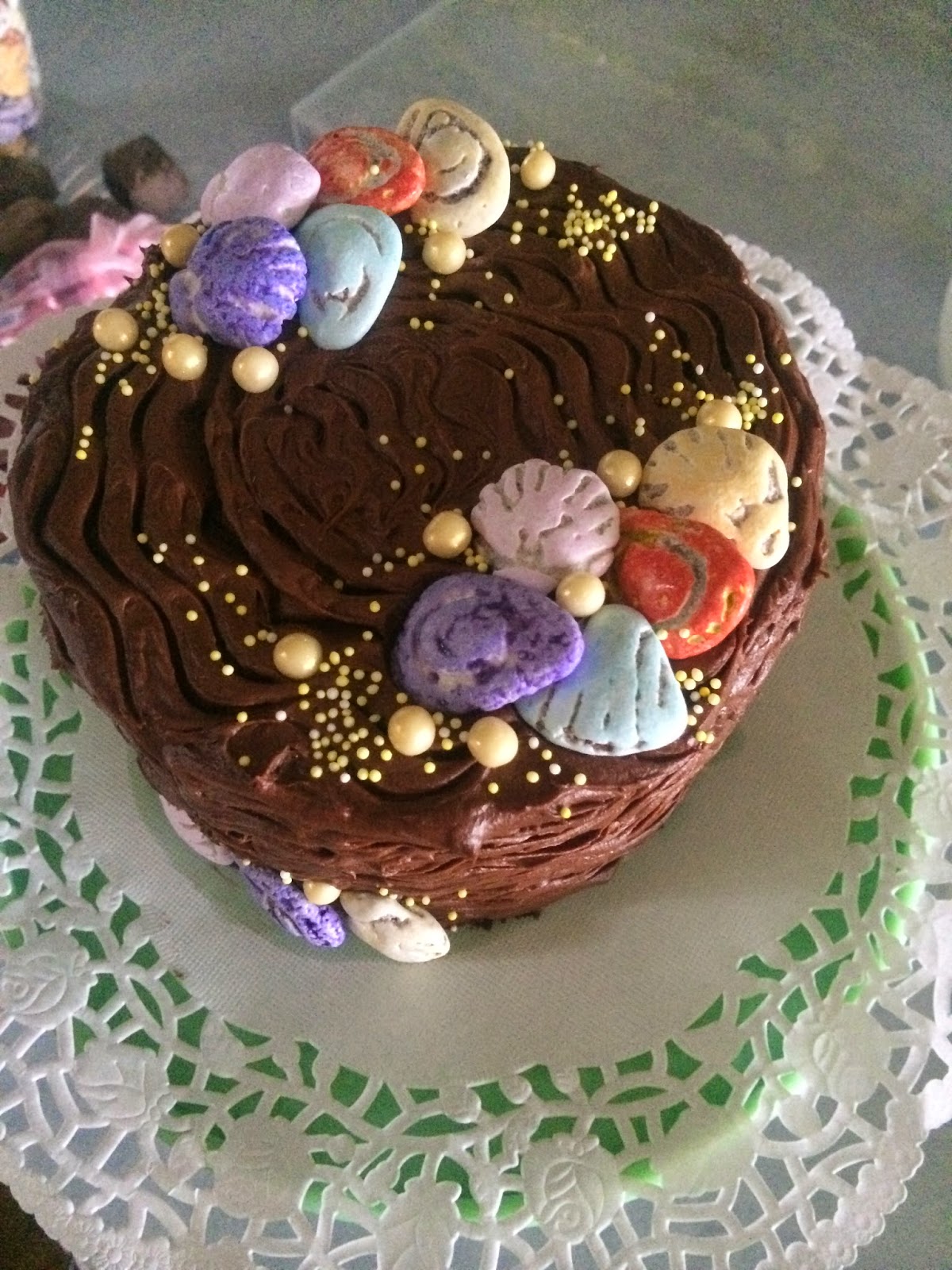 My garden client Maria made a scandalously good cake called, "Is it Really Better than Sex?"
It got two thumbs up from all and everyone seemed to come back for more - and not just to repeat the moniker!  If you ask nicely, perhaps she'll share her secret recipe…

Both cakes played well with the homemade ice cream too. 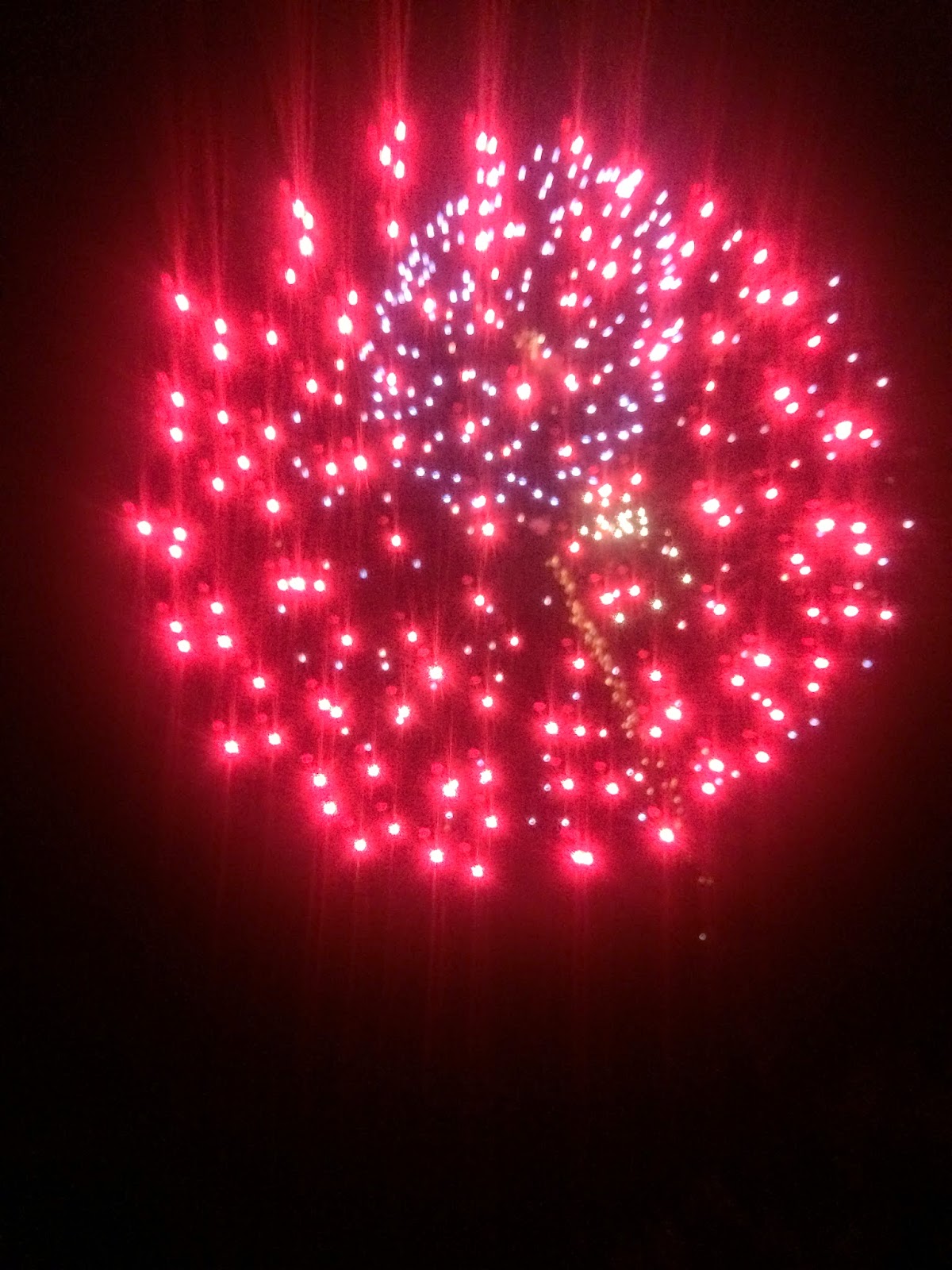 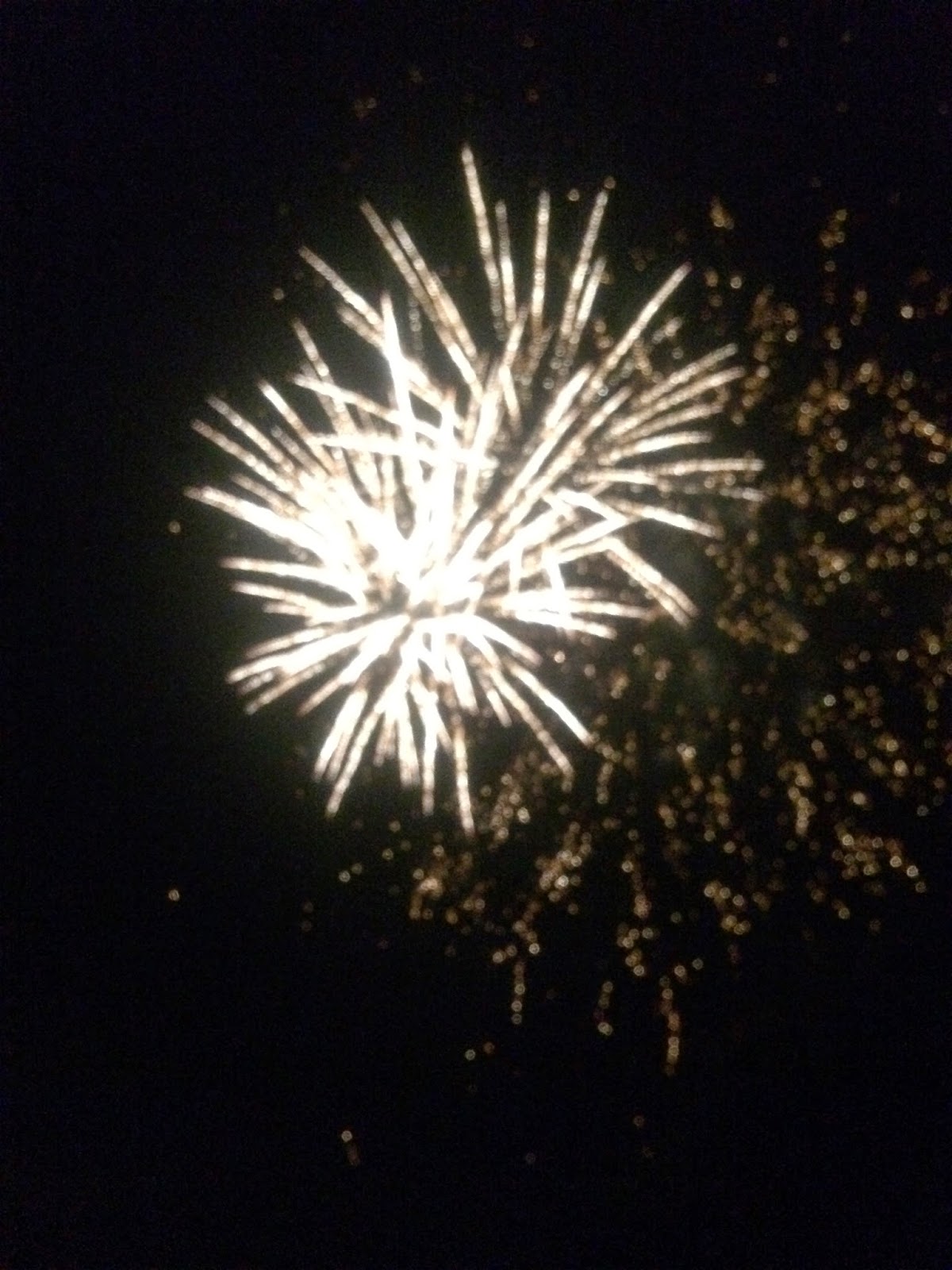 Next day was Bloody Marys after massage on the porch terrace overlooking the bay and gardens.  This is heaven.
Here our house guest, Wendy, is enjoying the spa treatment massage therapist, Sharon Chessman, Integrative Healing. Sharon is also an aromatherapist and gave me some potent rose and lavender oil that I love. Do you know about the metrics of the healing oils? 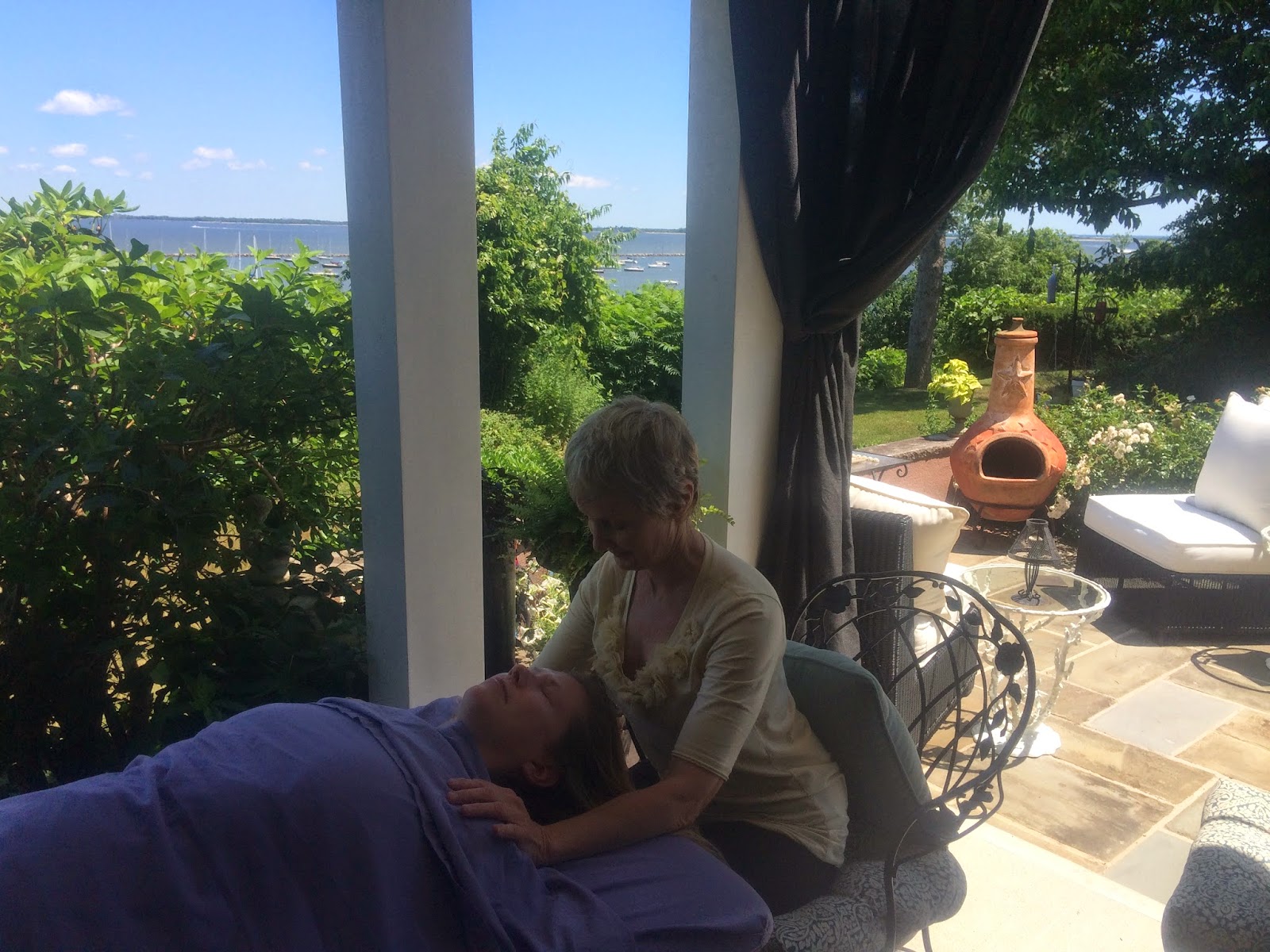 We even got to the beach for lunch and a tour of Sandy Hook park - we showed Ken & Wendy the lighthouse there -- the oldest operating lighthouse in the United States and along with the Twin Lights, guards New York harbor.
As hort trivia: where there is poison ivy on Sandy Hook, the hort rangers have brought in goats to reduce or eliminate the spread of the virulent, noxious weed.
It was back home for cocktails and delicious leftovers as the sun was starting to fade to orange and pink… and we sat amid the red, white, and blue - flowers... 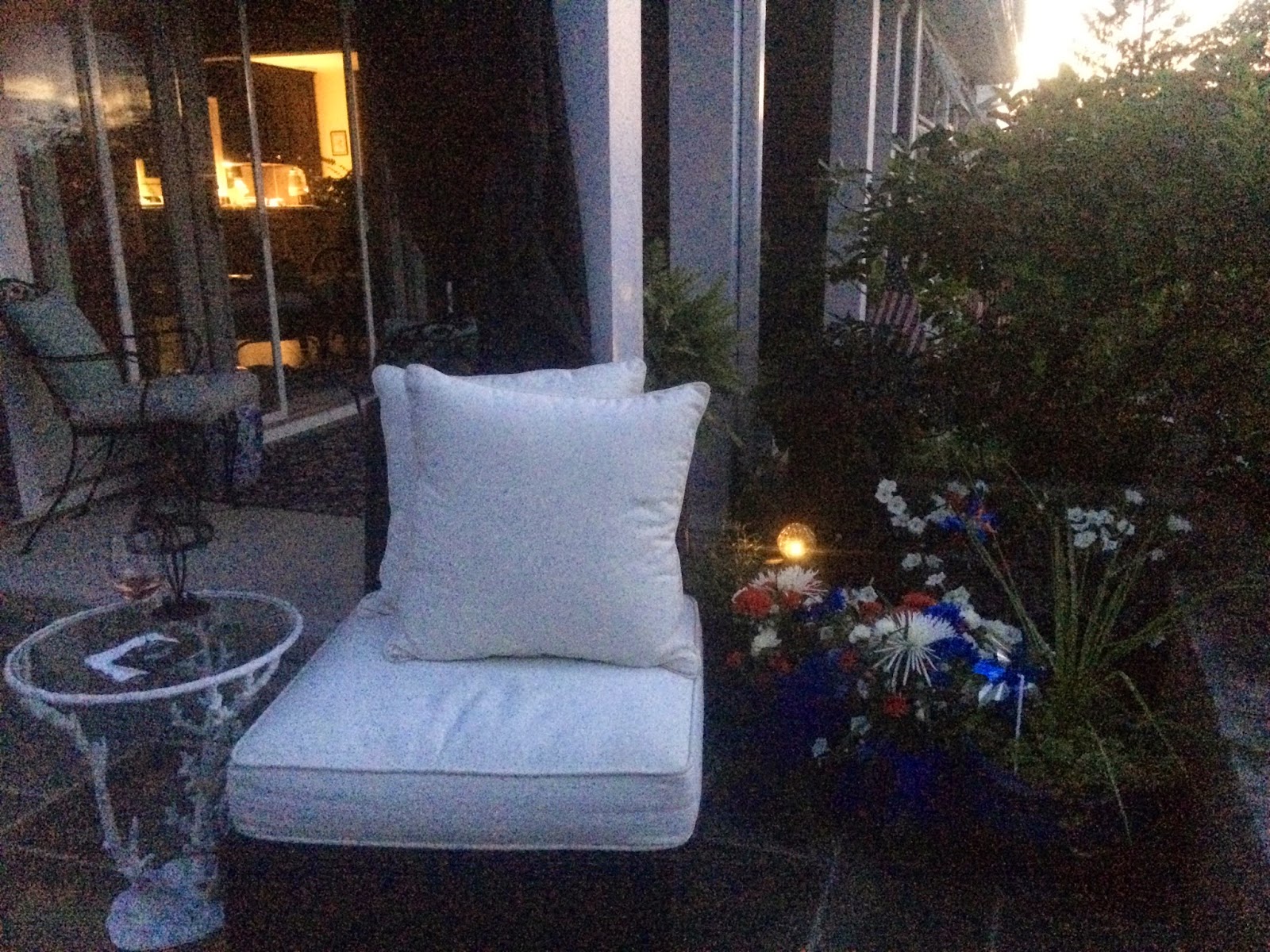 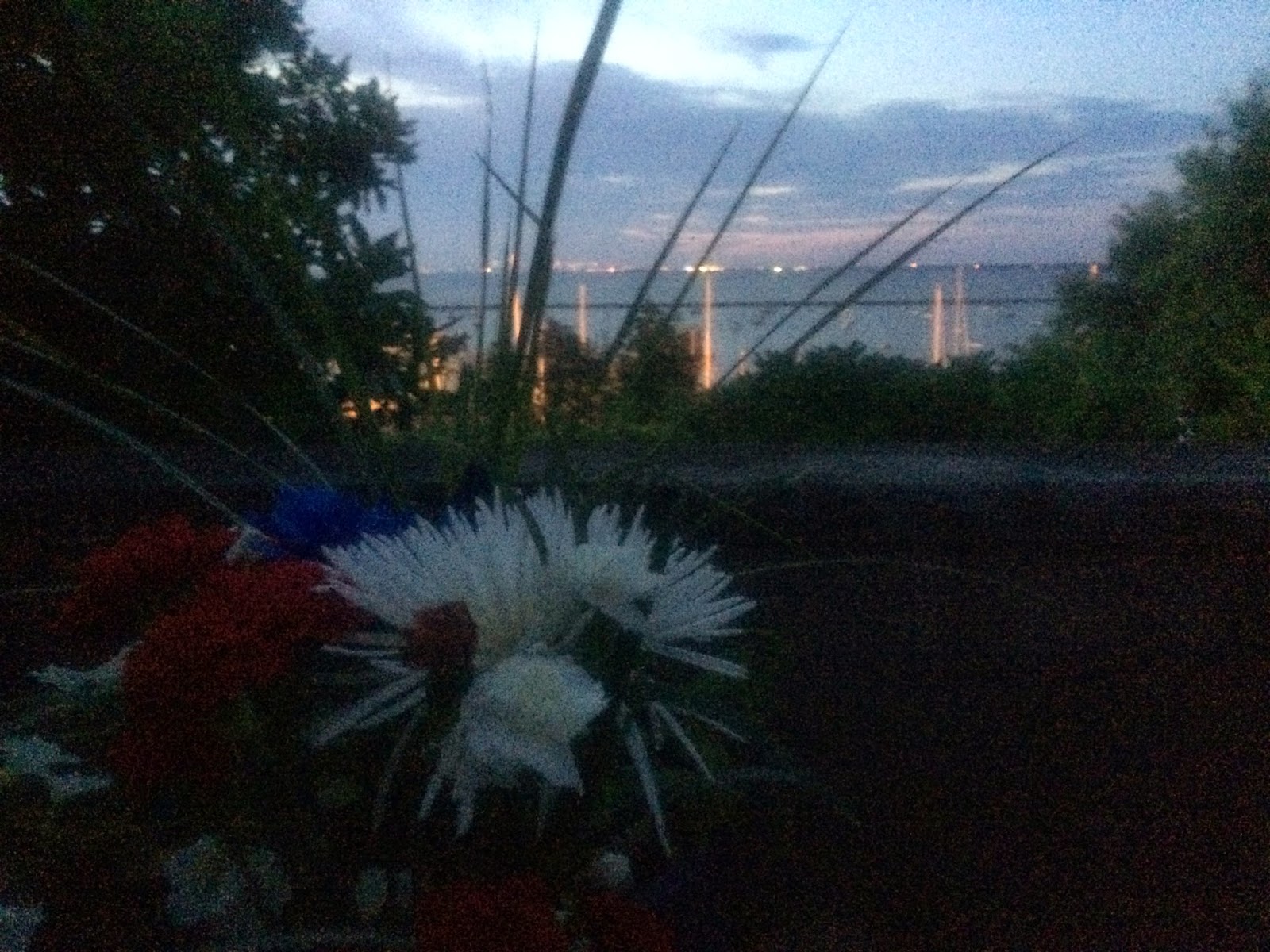 With Manhattan, Brooklyn, and Long Island winking back at us, we said farewell to a truly wonderful Independence Day weekend and the official kick-off to summertime. 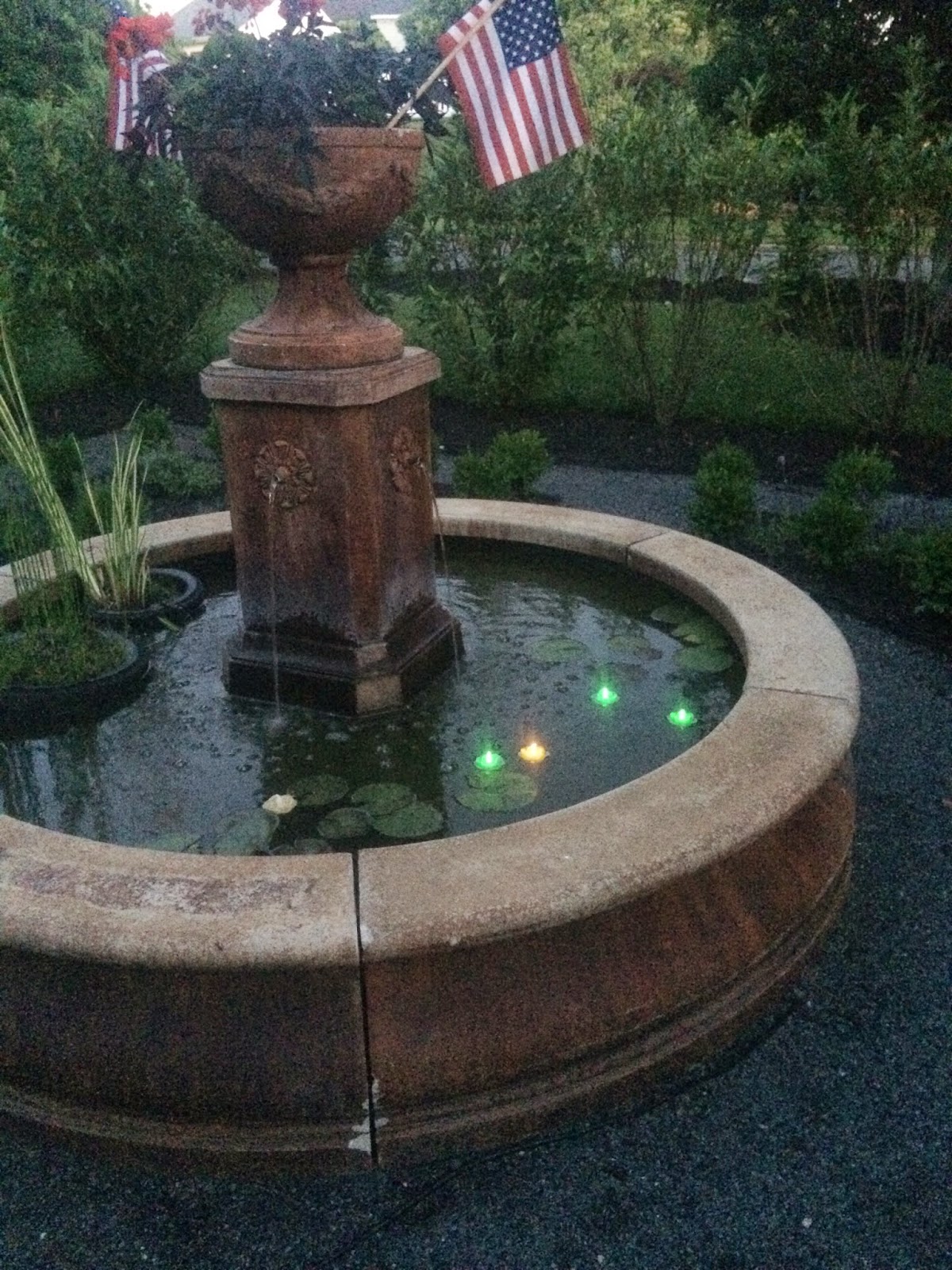 And all that sparkled this holiday weekend wasn't in the heavens but right here in our own Glamorous Garden…
Come to think of it, gardens are a bit of heaven on earth.

Enjoy your sweet, glamorous gardens this season.
Posted by garden glamour at 7:51 PM