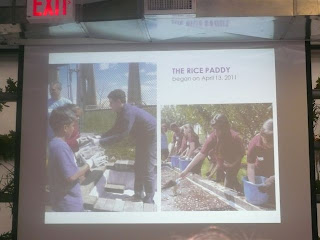 After the keynote speaker, Thomas Fox delivered the morning’s compelling and informative talk that was based on his recently released book, Urban Farming: Sustainable City Living in Your Backyard, in Your Community, and in the World
Urban Farming

Following a delicious, healthy lunch and happy plant talk among the sold-out attendees, the Panel discussion swung into a spirited, enthusiastic showcase of some of the City’s best, most successful urban farmers.

Each panelist provided a thumbnail overview of their work, most accompanied by a Powerpoint presentation to visually illustrate their unique contribution to the growing urban landscape.

Hammer introduced the panel part of the program, saying, “I once thought urban farming was just farming in a city.  But ooohhh nooo!” she said, with what could be a playful roll of the eyes.
She learned all are very different from one another.

Like children or snowflakes, there is a distinct personality inherent in every urban agriculture enterprise.

Brenner described Battery Park Conservancy’s first season, last year and the 800 students who were enrolled in the program that was supposed to be a two-year effort but now plans are underway to have ten schools learning composting and working a Historic Dutch Garden.

Phyllis and Eun Young described how together, with their team, have designed and maintained lush gardens and recreational areas at Randall’s Island Park where youth can play sports.  In 2007 they earned the Perennial Plant Association’s Honor Award for the Water’s Edge Garden on Randall’s Island.  In addition they showed how they produced 35 edible garden beds for the school children to grow food including organic vegetable such as Dragon carrots, Bambino Eggplant and Little Gem Baby Romaine, and fruiting shrubs producing 820 pounds of food they brought to a soup kitchen in East Harlem and the “little French nuns who run it.”
The rolling pig compost “Pig” brought lots of approving smiles from the audience. 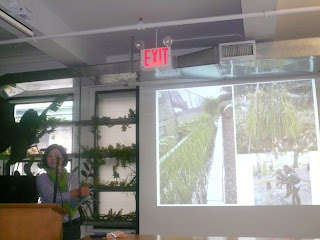 But it was the duo’s launch of the city’s first rice paddy that elicited the audience’ oohs and ahhs, signaling their delight and discovery and respect for this creative urban gardening initiative.
They showed how the came up with the concept: Eun Young’s extended family offered support and best practices; the building of the water garden, the harvesting, including the threshing.  Celebrity chef, David Chang of Momofuku was contacted and was just as enchanted and immediately offered to support and partner with recipes and cooking demonstrations for the children.
Next exciting food opp?  Look out for sugar cane!

Windowfarms’ Britta Riley is dubbed a “social entrepreneur, technology designer and artist.”  True, but she’s also an inventor, a gardener, an educator, a catalyst and all round “Green” angel or prophet.  She is friendly and eager to share her story and her inventions, demonstrating and teaching how to go about becoming a powerful urban farmer even if one has zero real estate… 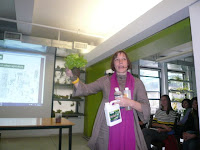 She passed around elements of her “vertical hydroponic garden for growing food in your window” so we could see and examine the ingredients and parts of this alternative growing container.

They look like glass beakers – but more mid-century designed look that escalate or cascade and with a constant, readily available water supply.  Genius. She even offered a 10% discount!  To learn more: Windowfarms 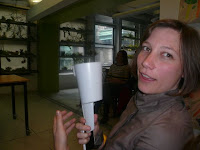 Erika Brenner, Food 360 is a farm to table job training program that is a partnership between Dekalb Market, Market Share, and FamilyCook Productions.
Brenner’s success story started, in fact, at last year’s Urban Agriculture Conference where with nothing more than a piece of paper, she heard great stories and was inspired to take the leap and start the career training. Just like that. Brenner took the leap.  “Just do it!” she said. 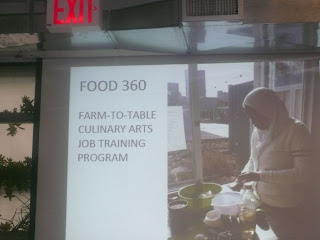 She showed some great images of the challenges and results she and her team have produced.

She advocates for the most diverse audience – those that have a passion for food, and to transform areas where a difference can be made. To learn more about getting a career on: Food 360

A lot has been written about Annie Novak, head farmer and co-founder of Eagle Street Rooftop Farm in Brooklyn and gardener with the Ruth Rea Howell Family Garden at The New York Botanical Garden (NYBG) Children’s Gardening Program.  I have been one of those observers and bloggers covering her lectures and forays. 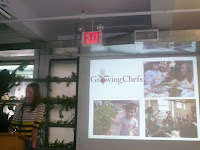 She is also a recognized force of nature.

“Food is the most exciting part of what she does. She talked about recognizing it’s not so much about food access as it is about food quality.
She also talked about food security and practical tips for making a sustainable roof garden – from roof access to watering to egress to weight load to sun exposure to soil and growing media (she uses Rooflite: 40% compost and 60% expanded shale and clay.)

She amused the audience with her reference to utilizing natural pollinators, including honey bees, and chickens and rabbits to facilitate compost. “IT’s a very closed look system.”
She supplies food education and inspiration.

Last up was Zach Pickens, Riverpark Farm (and by the way, how perfect a name is “pickens” for a farmer – urban or agrarian?!)

Pickens explained that while his urban farm is no less of a challenge than the other farms presented, his is different because it exists as For-profit.  It must profitably grow produce for  Riverpark A Tom Colicchio Restaurant  in Kips Bay.  With wonderful views of the East River on one side, the restaurant boasts the raised bed working edible garden on the other side, growing seasonal foods for the kitchen and chefs. 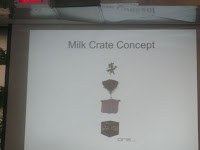 Pickens says his work is not about education per se, as the other panelists, but he has a lot to teach.
The edible garden is built on a stalled site” meaning it is a commercial real estate project that hasn’t been able to be completed due to the lack of financing.

In the meantime, a garden grows and the city is all the better for it.

There are now more than 600 such stalled sites that have morphed into gardens.

Pickens says he gets to be creative and admits he counts on GrowNYC as a consultant.

Started in September 2011, he showed the before and after images of the garden and working farm and the event space it has become.  It’s beautiful.

Pickens shared a few amazing metrics from the farm at Riverpark:  they employ two farmers (that is one more than Pickens!), the area is 15,000 square feet of which they use only half at the present time, they grow the food in 3,500 milk crates that have been converted into planters!
They have produced more than 3,000 pounds of produce just in the first five months, including 20 winter crops, made possible by the urban location’s micro climate – and most exciting: within 500 feet of the restaurant’s kitchen!
A chef’s dream.
I’ve met Riverpark’s chef and partner, Sisha Ortuzar, at one of the Greenmarket food benefits, and I could only imagine how inspiring this “carton to kitchen” farm is to his fresh, seasonal cuisine!

Pickens explained how they produced the innovative, simple and easy-to-make milk crate gardens. They line the crates with landscape fabric and staple it.
They then fill with potting mix (about $5.00 per crate).

“It’s mobile and modular,” said Pickens, showing images of how they can readily move the crates that are placed on wheelies.  “We had zero loss with Hurricane Irene – because we just moved everything inside,” he beamed.

Pickens charmed the audience with his description of developing unique tools for a unique farm.
Think ‘duct tape’ American innovation when it came to their ideas to improve efficiency for seeding, harvesting and bed prep.  He stuck or grafted a hand cultivator on a handle!
Seriously. NASA could’ve used this plucky, resourceful manager!
He said he got the seeder from Johnny’s Seeder and was always inspired by Eliot Coleman.  “He’s my bible,” Pickens declared.

That homage goes up in spades for all serious gardeners.
We love Eliot and Barbara and Four Season Farm
It almost seems as if the couple is pure garden magic – and love.

A rather lively Q&A followed the panelist’s presentations.

The biggest takeaway here was it seemed that most agreed that there is no substitute for horticultural knowledge based on formal education and training.  Go with a passion and an idea, but at the same time, invest in the study of horticulture.