New York’s professional horticulturists meet in the “off season” at the Central Park Armory, nestled onto the rim of the Park, just nosing the children’s attractions that hold court outside, behind the imposing, rather Gothic-looking building, somewhat like a movie set for Alice in Wonderland.
Indoors at the Armory, at the winter meetings, Metrohort members look forward to gardening camaraderie, networking and learning about our passion: plants and landscapes.

Recently, all roads led to F2 Environmental Design’s Andrea Filippone, the horticulture world’s leading expert on boxwoods, whose talk “Inside and Outside the Box” explored the world of boxwoods. 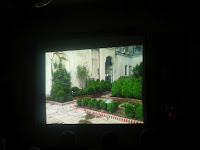 What Alice Waters is to homegrown food, Andrea Filippone is to box—that staple of virtually every designed garden.

Filippone demonstrated her confident knowledge of all things box, provided a cautionary “heads up” on the rolling thunder of virus, pathogens and pruning that is increasingly afflicting these ubiquitous work-horses of the garden.  She was common-sense, country doctor in dispensing plant RX advice, and provided a hand-out that is a gold mine of ready information about box, listing: Cultivar, Hardiness, Exposure, Size, Best Features, Other Feature (such as Form and color), Pruning and Substitutes.
This was a Very informative lecture from start to finish.

Filippone quickly earned the audience’s interest and respect.
She was billed as a landscape designer who “brings together the finest elements of design with ecologically sound scientific practice… She grows boxwood using organic methods. In the past ten years, she has started a boxwood nursery of more than 50 cultivars and now spends most of her time defining structure and space in the outdoor environment. She uses no toxic chemical pesticides or synthetic high nitrogen fertilizers in dealing with pest and disease issues such as cylindrodladium pseodonaviculatum, aka Boxwood Blight. She is a Watson Fellow.”

I think she could be the queen of boxwoods.  Her oeuvre is an inspiring, over-the-top palette of all kinds of boxwoods that extend waayy beyond the usual English and Winter Gem.

Just in time, too.

The MetroHort professionals who attended the lecture were transfixed as Filiippon, informed us about the virulent fungus, boxwood blight, now ravishing the staple of virtually every garden: the boxwood border or defining wall of many a “garden room.”

As an aside -- and not mentioned at the lecture is a very interesting piece of garden history as it relates to boxwoods:  in conducting the interviews for my soon to be published book, “The Hamptons & Long Island Homegrown Cookbook” that explores the nexus of culinary and garden art – how master chefs are inspired by their homegrown farmers and fishermen – I learned that the owner/steward (13th generation to do so) of Shelter Island’s Sylvester Manor, Bennett Konesni family brought boxwood to these shores. Here is the excerpt from the book:  “farmer and executive director Bennett Konesni’s ancestors owned the entire Island – which for centuries was virtually dedicated to farming and that early on, Bennett’s family not only brought many heirloom vegetables, especially tomatoes and potatoes to America, he claims the family also introduced the now ubiquitous boxwood to the American shores, for which landscapers and gardeners from Long Island to Charleston to San Francisco pay homage to the family! Then as now, the secret of the family’s longstanding garden success is the soil.” “ 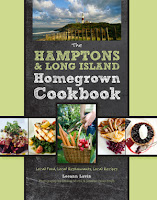 Just like Sylvester Manor’s farmers, Filippone too stressed the importance of planting in good soil. 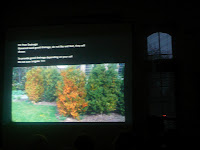 If boxwood is planted in clay soil, the box is under stress and can turn orange in color.
Discoloration is due to lack of nutrients. She advises to do a soil sample -- both a textural and chemical test.

Also a problem for boxwood is common pests.
English boxwood is very susceptible to fungus, in particular the defoliating leaf minor, which can cause a blistering, at the end of leaf effect, peeling the leaf apart. 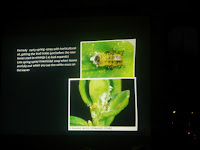 In images on the screen (she also brought along healthy plant samples), she pointed out the larvae feeding inside the leaves. “They lay their eggs in spring, stay through the seasons and then emerge out of the back of leaf” she said to much “nervous” laughter as the hort pros wistfully recognized this look. 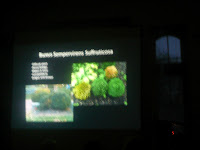 How to deal with this and the fungus that causes the cupping effect:
* Don’t plant with too much density or too tightly planted –
English boxwood need air circulation
* No wet feet.
* Plant other box cultivars.  “Don’t plant only English
boxwoods!”
* Use organic solutions – spray with insecticidal soap

She recommends that this year – due to extraordinary warm weather because of climate change – to check earlier than normal in April to see if flies are present, swarming the box – in order to confirm leaf minor.  If so, spray so they can’t lay more eggs and then cut the branch off and burn it. 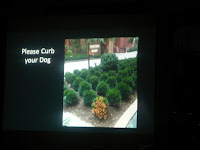 Filippone also humorously – but emphatically - pointed out the importance of curbing dogs!  “The heat of the urine turns the box brown even after just one time. It can ruin the box plant,” she claimed.

Macrophoma is a fungus that makes leaves drop and look black on the inside of foliage due to dense planting, too much rain or high humidity.
Solution:
* Prune as much as possible  (The boxwood queen is funny, too.  Maintenance?  “I prune when I get to it,” she says.
*  Watch invest in drainage and irrigation
*  Plant different varieties 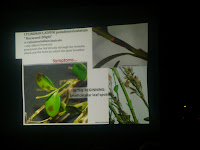 In general, she also admonished gardeners not to brush snow off boxwoods (not that we had any to worry about this year!)
If you think you’re helping the box by brushing off the snow – you are not. The problem won’t manifest itself or be seen until summer.  You can break the internal plumbing. She explained historical gardens in particular, have this experience.
Brushing or removing the snow can break the stem – and the break allows a door for the fungus to set up house, creating a canker. (What do fungi know of decorating?!)
Solution:
To remedy the problem once it has occurred, and after all threat of a snowstorm, cut past the canker.  She says the plant will eventually grow back.
Let the snow melt – the plant will slowly upright itself and come back, according to Filippone.  Note: during a discussion after the Wave Hill lecture last night with the fabulous & dreamy Thomas L. Woltz, Nelson Byrd Woltz – a post coming soon about his work! – there was talk that may have understated the case for brushing snow off the boxwoods.  All the hort pros agreed that if the snow is too wet and heavy, it will break the stems.  Consensus seemed to be to allow nature to orchestrate her snow dance for a dusting or light snow…

With regard to boxwood blight, Filippone advised: “Don’t panic.”  Rather she suggested employing all the solutions noted above to prevent from the blight from spreading.  Further, the blight won’t affect other plants.  Whew! 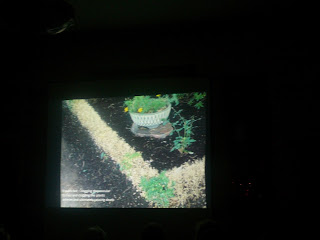 However, the black spot and defoliation can wreak havoc on the box within a week.

The blight is vascular –  and has already devastated plants rapidly in Australia and the UK.   It was discovered in October of 2011 in Oregon, Connecticut, North Carolina, and Virginia.
No one is sure of its origins.
Experts believe it’s traveling with or through water – even if the rain causes leaves to touch its neighboring box it will help spread the fungus. It’s a sticky substance that can cling to clippers and clothes, so she recommends sanitizing.
Also:
*Fungicides are unsuccessful
*Don’t fertilize boxwoods
*Drip irrigation is a solution, especially when used in the nurseries where plants are packed especially tight 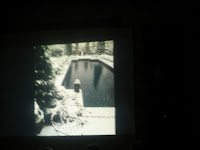 Filippone went on to amplify the great variety of boxwood – this was the biggest take away – to learn the astonishing variety of available boxwood to gardeners.  There is a color and shape and sculpture to add variety and excitement to garden designs. And think winter wardrobe too: 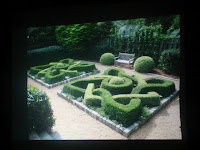 She and her team collected boxwood in Macedonia, partnering with Longwood Gardens.  Their goal was to recreate the Edgar Anderson hort exploration in 1934.  Filippone’s team brought 33 cuttings for cultivation Macedonia is a rich area for a variety of box, she explained, thanks to lots of temperate variance and micro climates there.
She showed tall ones and forests of boxwood and weeping ones!
She will monitor her boxwood cultivar brood for six to seven years.  Her goal is to see what the varieties can do in terms of color, year-round interest, and if they acclimate best for windy or cold sites.  Stay tuned for market updates!

She has over 50 cultivars at her nursery in the Garden State. (www.ajfdesign.com or www.f2environmentaldesign.com)
She uses lots of ‘Justin Brouwers’ buxus sinica var.insularis  (planted 18” apart) and Green Mountain, ‘Morris Dwarf’ buxus microphylla var. Japonica.
She is 100% organic and uses drip irrigation.

Andrea invited all to visit her bucolic, glamorous Garden State nursery and home at any time.  I, for one, will be motoring to this garden-growing oasis soon.  (Of course, please your manners and do call ahead to the Boxwood Queen and hostess….) 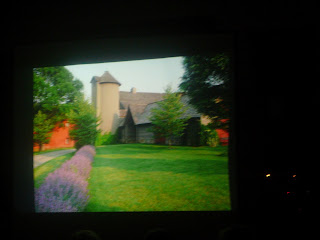 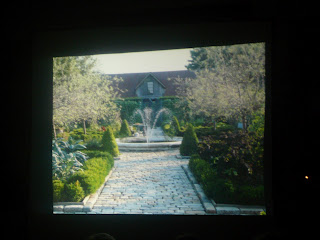