“Tomorrow’s Garden” Book Launch in New York City
February 17, 2011
I can’t think of another, more anticipated garden book than Stephen Orr’s first tome, “Tomorrow’s Garden.”
Hailed as a design and inspiration for a new age of sustainable gardening, the book is a spot-on, sensual, inspirational tour of what Stephen’s visionary eye sees as “…the gardens of the future.”
He describes his idea of pleasure gardens as an aesthetic that cannot deny the urbanization of our world and the “green movement.”
The book joyfully and respectfully illuminates amateur gardeners and their work.
That alone is a refreshing nod to his at-the-gate-position in the e-volution of home gardens. How Stephen is that?!
He says, “These gardens not only concern themselves with reaching their own best level of sustainability in water usage, plant choices, local ecology, and preservation of resources, but they are also aesthetically delightful.”
I’ll say. And then some…
First scheduled to premiere in the fall of 2010, garden enthusiasts packed the Wave Hill-sponsored lecture in the spring of last year to hear Stephen tell the story of the making of his first book.
His funny, self-effacing, and very intimate, personal introduction to the motivation and making of book was equal parts garden tour, horticultural tutorial, how-to guide and pure magic.
Not unlike the man himself.
If you don’t already know Stephen, you must get the book.  Trust me.
If you know Stephen, you will be like me, buying multiple copies for family and friends.
Whether new garden friend or me-gusto admirer, when reading the book you will have the sense of taking garden tours with your dearest friend; talking garden design and sharing homegrown tips over a cup of coffee or a glass of wine, while discussing that day’s garden exploration.


He is the kind of gardening guru you want to spend time with.
You find yourself smiling or nodding your head as he describes a garden narrative.
He can be provocative, but he won’t go all fancy pants on you.
The book is rather a pure, unadulterated ode to the emerging garden of tomorrow (that is today!) as a cultivated space that is beauty, utility, and creativity that also respects a sustainable, local aesthetic.
Don’t be surprised when every other garden lecturer references “Tomorrow’s Garden” and Stephen’s seemingly prescient garden spaces.
He is a pioneer.
A reluctant one I imagine but nevertheless...
Stephen has energetically and thoughtfully curated a collection of exciting, cutting-edge gardens for us to explore.
We shouldn’t all want an English country garden.  Or an Italian or Chinese garden --any more than our meal preparation should mimic some overzealous desire to import an ill-conceived attempt at recreating something that doesn’t celebrate the very essence of what makes each and every place unique and special…
His book seeks out gardens that teach us how to be sustainable and glamorous…
Stephen captures this feeling and wraps it up in a garden opus that you won’t put down.
Likewise, you will use the book as a working reference: there are plant lists, hardscaping ideas and soil amendment tips.
I’ll review the book in more detail later.  I couldn’t help showcase a bit here to give a context for the book launch.
Stephen is garden friend from um, I can’t remember J  I do know I was thrilled when he not only attended botanic garden events at the two amazing NYC Gardens when I worked there but also agreed to be a judge for the community gardening program when I was the director of communications.
It was a loooong day, visiting neighborhood gardens, judging streetscapes and container gardens and he was as enthusiastic and eager and encouraging to the citizens at 4 pm as he was at 10 am.
He loves this garden stuff and it shows!
In Chapter 12's Gardening the Street, you can see some of the judging day's green-garden streetscape images and learn about the urban gardeners' successes and challenges.

From that time to now, Stephen has delightfully and deservedly explored the world of gardens on every level.  Recently he was named the Gardening Editorial Director at Martha Stewart Living magazine. http://www.marthastewart.com
The March issue – with the in-your-face, Crayola-colored basket of vegetables cover shot, features a review of his book.
At the same time, this issue marks Stephen and his team’s first garden guide editorial. The premiere garden feature is not unlike the book’s classy, practical no-nonsense, inspirational style.
It is a gob-smacked wonder.
You find yourself devouring the exciting segment and yet breathlessly asking, ”Why haven’t garden stories been like this before?”
He and Andrea Mason, Gardening Editor, The Martha Stewart Show (TV), who I worked with on more than a few gardening segments, along with Shaun Kass, Martha’s head gardener, Bedford are the garden experts who have contributed to the pulse-quickening “Vegetable Garden Primer.”
Wowsy!
Tomorrow's Garden Book Party

It was a perfect evening for the book event. Nice, clear weather.  For a change. No snow. There were a lot of parties on the block, so there was an overall festive appeal and spark on the street.
Tomorrow’s Garden party was an overfilled, living room-styled party whose happy guests hailed from the worlds of horticulture, publishing, design, edible landscaping and garden design, TV and photography.
All have touched Stephen in a supportive, dynamic way in all the star-filled points of his life.
Take that Facebook!
Martha attended the book launch event.  What a boss…
As did Andrea: 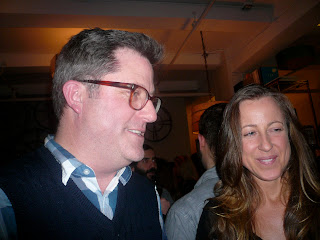 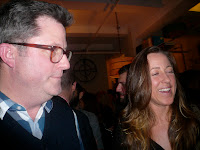 And Melissa Ozawa, a former colleague of Stephen’s at House & Garden, a noted manuscript reader who Stephen acknowledges in the book was a co-host of the event.
I have to add that I have also worked with Melissa and she is a delight: an unassuming talent with a marked aesthetic. I admire her.
Melissa wore happy Dorothy-like, Wizard of Oz shoes on the night of the book launch J
How transporting! 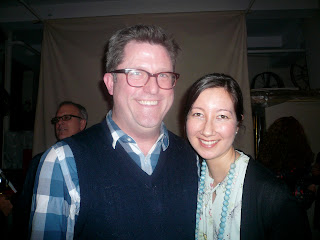 Here is Stephen and Melissa – what a dynamic duo.
The books were for sale, ready for Stephen to autograph. 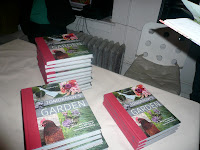 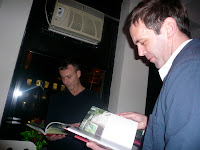 No signing table; and I thought that was nice.  He was mingling with the swelling guest crowd. 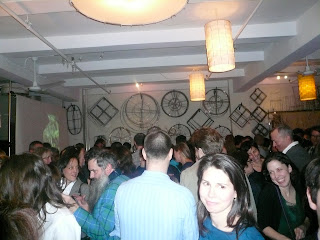 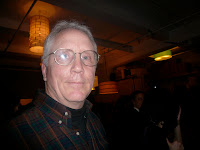 As I was tasting a treat or two, I was surprised to see my garden friend Tom Christopher at the food table. He joked he does take the hay seeds out sometimes to visit the big city.
Tom  has just released his latest book, “The Artful Garden: Creative Inspiration for Landscape Design” co-authored with James van Sweden. I told him I Tweeted (@gardenglamour) news of his book after reading in Architectural Digest. http://www.architecturaldigest.com
I also chatted it up with New York Botanic Garden's Marc Hachadourian, Manager of the Nolan Greenhouses for Living Collections who runs the much-idolized Orchid Collection.  He was deservedly a bit breathless, as he was busy preparing for the annual Orchid Show at NYBG, scheduled for March 5-April 25 http://tiny.cc/sy93k
http://www.nybg.org/tos11/the-orchid-show.php

I did ask an admiring guest to take a picture of Stephen and me. But sadly, she was no Annie Leibovitz.  In fact, there is no image at all of the two of us. L  sigh… 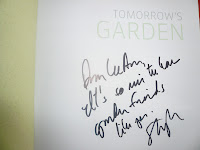 But look what Stephen wrote in my book!
“It’s so nice to have garden friends like you.”
How sweet.  Right back ‘atcha.
Gardens are about beauty and sharing.  And every great garden tells a story. Stephen has curated the most fascinating and gorgeous garden stories to share...
"Tomorrow's Gardens" illuminates and celebrates the designed garden's sensual and spiritual elements in an exciting and refreshing way.
Cheers, darling.