I belong to the Landscape Design Alumni group through the affiliation with The New York Botanical Garden (NYBG).
The most recent meeting featured Barbara Geller, Gardens by Barbara, LLC, www.and a member of the group, who provided a top-notch presentation about the creation of a green roof at her country house in Bucks County, Pennsylvania.
It ‘s a beauty.
I knew it was going to be a good lecture when Barbara started off by saying she had a “story” about Green Roofs.
I respect and relate to a garden designer who emotes this way.
I can feel their artistic soul.
I tell my garden design clients and lecture audiences, that every great garden tells a story.
So no tutorial from Barbara, but rather, a story.  A compelling garden story.  The challenges and the triumphs.
Barbara has told this story on several previous occasions.
You immediately sense she is knowledgeable and passionate about this subject.
Maybe it was from her previous job as an IT director at Deutsche Bank or just maybe it is her devotion to the subject and self-described attention to details.
Or a combination of these elements.
Whatever the motivation, the presentation benefited from her professional research and documentation.
She also brought samples of the green roof construction materials.
And provided informational handouts,  complete with resources that she secured from an NYBG symposium on Green Roofs, plant lists, roofing materials and growing medium – and costs.  And reference books: “Green Roof Plants – A Resource and Planting Guide” by Edmund C. Snodgrass, Lucie L. Snodgrass from Timber Press.
It was all very impressive.
And so is the green garden roof she produced. She and her architect, Jane Wilson, who are now friends, hails from Ford3 Architects, LLC, won an award for its sustainable design.
The garden has been a feature stop on local garden tours.
She began her story -- at the beginning!
She started by defining what a green roof is.
It is not a painted “green color” roof as one of her construction managers first guessed she wanted!
Green roofs are insulation. They improve the aesthetics of the environment.
She pointed out that most people don’t think of the flooding that occurs in towns and cities when it rains because of the storm water run off and impermeable surfaces.
And of course, the green roofs sporting their plant profile much as a fancy hat shows off its saucy, sexy accoutrements.
Green roofs also reduce the Heat Island effect by 15-20 degrees.  The Green roof reduces cooling needs by 25% and in winter cuts heating loss.
Barbara showed amazing infrared photos that showed the difference in temperature 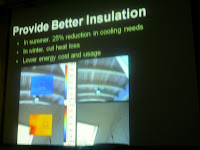 From the Hanging Gardens of Babylon to hospitals and corporate green roofs, and the preponderance of successful green roof design in Europe, particularly Germany where 10% of residences sport green roofs according to Barbara.
She demonstrated it’s good business and good aesthetics to produce more green roofs. They are a major solution for a sustainable future.

She had me at Green.
Barbara told us she wanted to be able to look out her home office window and enjoy looking at the green roof garden.
She wanted the shape to mimic the undulating landscape.
She wanted to be able to see the green roof garden as she walks up to the house from the garage.
She told us how she searched to identify an architect who would even take on the project.
If green roof designs are all still new now, imagine the challenge of locating a pro who could it in 2008!
She showed us the design and construction stages of the addition to the their once-upon-a-barn home.
I love all that indigenous Pennsylvania stone that supports the walls and homes -- so gorgeous.
And that stone is Barbara’s home and the addition where the green roof is the jewel in the crown.
The builder bought a local retaining wall, took it down and reassembled on site in order to match the existing stone. 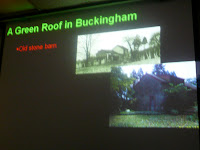 She walked us through the procedure of constructing the curved glulam beams: stronger than wood. These beams provided just the right pitch for the design too.
She suggested every vertical inch of green roof growing medium requires six pounds of square foot structural support.
"You will need a structural engineer," Barbara advised more than once.
There are many elements that go into a smart green roof and Barbara had done it all: separation fabric, mesh layer, rubber layer, plywood, plastic anti-slip cleats to “hold” and stabilize the 4-6 inch layer of growing medium. 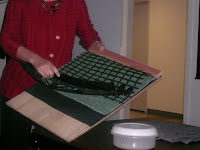 The cleats were secured from a German resource.
A green roof needs to be watertight. No holes from nails.
The roof must be able to withstand the weight of the plants and snow - in our area.

She had samples of everything for us to see firsthand. 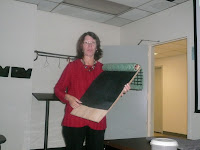 She passed around a sample of the growing medium that we could touch.  It was selected specifically for the shade tolerant plants on her green roof. 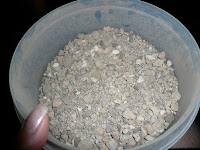 It is gravel that is 25% compost and 75% expanded mineral aggregate or shale.
It’s expensive at $110 per cubic yard.  It is lightweight.
The way the growing medium is produced is fascinating.  It is put in a kiln to create cracks and fissures so the compost will “settle in” there.

A typical green roof uses about 5% compost, she commented.
She said she knew she needed more organic matter, as the plants she was using in the design were not the typical sedums that need less organics.
Her green roof is what is referred to as “Semi Intensive.”
See?  Every artistic genre has its own nomenclature.
The “Intensity” here refers to the depth of the soil.
How to get up to the roof, you ask?
Initially, she had the builder provide her with a scaffold.
(Curiously, she admitted she doesn’t like heights ^:^)
Later, and with obvious pride, she was beaming as she showed the spiral staircase she found on eBay for $500.
Nice 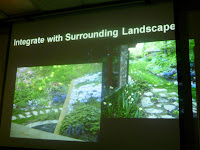 The plants she chose for the green roof garden are a combination of native and tried plants from her garden cuttings that would provide a full, four-season display of color and bloom.
The plants needed to have fibrous roots. She used a lot bulbs.
She only has 2-4 hours of sunlight on the roof so that was a consideration too.
She was able to produce a “naturalized design.” 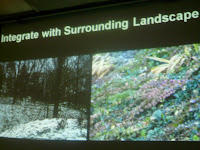 The plant palette included ajuga, phlox stolonifera or creeping phlox, geranium macrorrhizum or bigroot cransebill and yes, some sedum.
Almost all the green roof designs I’ve seen include sedum exclusively.
It was refreshing and inspiring to see Barbara’s bold foray toward using a mix of seasonal plants – and using them to great success. 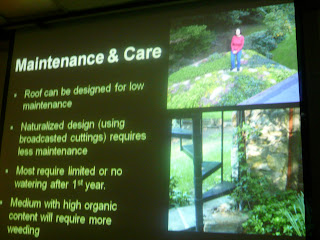 She is a leader in residential green roof design. Her home was a test.
She passed with flying colors.
Her design is elegant.  The plants and the green roof complement the native landscape.
Contact her for your design.
Green roof gardens are so glamorous.  (Just don’t tell them they are efficient too)
Another Green Roof source guide, according to Thomas Powell's "The Avant Gardener" is Green Roofs for Healthy Cities www.greenroofs.org  and at 416-971-4494.
Posted by garden glamour at 10:44 PM