Bees in the Morning and Fine Gardening and Vegetables

I am still waking up bees in the morning.
Here in the metropolitan Northeast, we’re enjoying a return to warmer weather after nearly two weeks of dreary, but much-needed rain.  I don’t think it’s Indian summer yet, but it feels a little bit like it.
The warm mornings find dozens of snoozing carpenter bees that’ve settled on the sedum and even the chaise lounge.  Given their unwieldy flying aerodynamics I hate to rustle them awake, thinking they need more power sleep.  But we all must get on with the day’s work.  I am gentle…
Yesterday we were able to do outdoor fine gardening, after a series of cancelled Monday’s, “called on account of rain.”
I picked up Hal, the Edward Scissorhands student from the New York Botanical Garden’s School of Professional Horticulture who came to the Garden State by ferry.  We met Sarah, professional horticulturist and graduate from Ontario Canada school of horticulture.
We had lots to do.  Remove “squatter” plants from the pool beds.  I refer to the plants who take up residence in beds and places they don’t belong as squatters. I don’t blame them though.  The designed beds are too seductive.  Whether they arrived on the wind or from what has been called the bird’s “poo factor” it was time to rid the beds of these unwelcome guests.
We also had to weed, trim, and prune.  Especially the espalier.  In addition, two of the lines had come undone a bit and the top line had to be established.  Hal worked all day snipping and cutting and tying.  We still have the last quadrant to get right, but the look is vastly improved and almost back to textbook perfect.

I don’t know why espalier isn’t employed more often, especially in urban and tight sub-suburban gardens.  In the European and Asian tradition, one learned how to grow fruit is small spaces.  Who needed a grove when you could put an apple tree on the side of the building?
Perhaps few people practice espalier when they saw the elaborate, twisted espalier from the Japanese and French culture where they seemingly love to torture their plants into intense designs -- finding the whole affair too “fancy.”
And espalier is a lot of work, even if the lines are rather straightforward.
But it’s worth it.
This espalier I designed is pyracantha or firethorn, so it has four-season interest: spring with the bridal veil of white flowers, late summer and autumn with its pumpkin orange berries, (which contrasts so Mediterranean-like with the purple of the caryopteris and the blue lyme grass in front of that.).  Often later, there are reddish berries. And it’s evergreen.  This provides beauty and the ideal real estate for bird’s nests, it seems!  We love checking out who’s taken up residence every spring.
We also had a very special on-site insect visitor checking out Hal Scissorhands.  It is the curious, prehistoric-looking praying mantis!  Sarah tells me she sees him (or her) with some frequency.
As he runs for his fancy digital camera, Hall tells me that praying mantis eat themselves!

Huh?!
Why do they do that?  This provokes some spirited lunchtime conversation.  I’ve heard of the black widow spider that eats her partner after mating.  Hal says praying mantis will do that too.  (Talk about loving and leaving them!)  And he says they will also do that if they are hungry enough.   This seems too sad to me. That seems like powerful hunger that could readily be ameliorated with all the plenty found in a garden…
I tell them I remember my father admonishing us never to harm a praying mantis or a dogwood tree.  They were both protected and it was against the law in the Garden State to kill them.  I honestly don’t know if that was really true, but it worked for me.
I potted up the containers with seasonal mums – here it is orange and yellow, with matching colored pumpkins of contorted shapes, stripes, and bumps.  This color combination set off the orange and yellow lantana that thrive right up till frost in the front western-facing borders on either side of the entrance.
I left the ornamental wine-colored pepper plants and the chartreuse potato vines in the pots.
We also planted white mums, Shasta daisies and white ornamental pepper plants in another garden.  As the ferns were still luxuriant in the urns, I just removed the limp-looking caladiums and inserted the pepper plants for height and color.  The white mums were dropped into the smallish box garden to the left of the entrance, making for a happy, eye-catching seasonal garden spot to enjoy coming and going.
I was also able to get those elegant looking silvery pumpkins that look for all the world to me like Cinderella’s carriage pumpkin!  I put these at the feet of the urns for a pretty entrance composition.
The whimsical “ghost pumpkins” are huddled at the feet of the cast iron containers, keeping watch for the topiaries there.  Who has the most curious shape I’m guessing they are giggling.
The great white pumpkin sites directly opposite the door in the liriope garden to be seen upon leaving the house or driving in from either side of the circular driveway.
A few years ago, I did a series of white pumpkins, positioned at various heights in the liriope grass garden.  I punched out the holes a la Martha Stewart design.  They looked like white lace with the twinkling lights from inside peeping out at night.
Very glamorous.
And while it remains warm, and the season extended, we are necessarily looking back…
This year’s gardens in the northeast were marked by extreme, record-breaking heat and lack of rain.  Very stressful for the plants and gardeners.
Great for the vineyards of Long Island though.  When I visited for the photo shoot for my book, Long Island Homegrown, the growers there told me how great this year was.
Thanks to my husband’s diligent research and best-gardening practices, our home garden was a banner year for tomatoes, potatoes, and shisito peppers, and yellow cucumbers in particular. 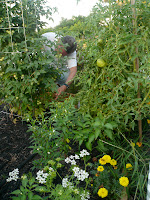 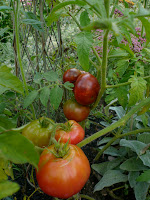 We enjoyed a variety of tomatoes; cherry and full size right up to beefsteak. I Love the shishito peppers in place of almonds with a martini at cocktail time.  Munching the peppers grilled or pan roasted with fresh sea salt is a true luxury. 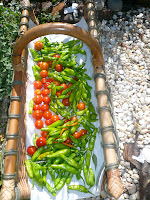 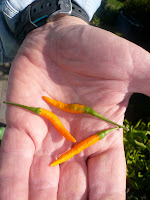