Dominique Browning Lecture for Wave Hill Gardens Lecture Series
I wish I could say I was waiting for The New York Times’ Miranda Seymour Review of Dominique’s new book, “Slow Love” How I lost My Job, Put on My Pajamas and Found Happiness in Sunday’s May 16th Book Review (http://tinyurl.com/399pqhf)
to write about Dominique’s wonderful lecture at the New York School of Interior Design as part of the Wave Hill Lecture Series.
Atlas & Company

Truth is I was too busy with writing and producing my book, “The Long Island Homegrown Cookbook” a series about Master Chefs and Their Gardens.
Commercial break here ^:^
My book explores how gardens inspire artists – especially culinary artists because they use the bounty of the garden in producing their art.  The book will include chef profiles, garden art (my watercolors), plant lists, and recipes from these leading farm to table master chefs!
I have heard Dominique speak before and eagerly read her book reviews in the Times.  I also sincerely thought she wrote the best Letters from the Editor when she was at the helm of House & Garden magazine.
Why?
She speaks to the audience from her heart.  I always felt like I was sharing a cup of tea with Dominique.
She could tap into the national mood while seemingly reaching into my own – and by extension her readers – to expose personal experiences and dreams.
And so by extension, she forged a deep and enduring relationship with us.
Without the histrionics and grandstanding of too many of her peers.
Not surprisingly, The Wave Hill Lecture spoke to me in much the same way.
Dominique is charming; her presentation is indelibly touching. 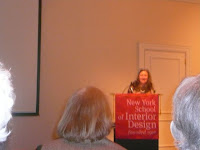 Most garden lectures or talks take a fairly familiar path: overview, pretty pictures and the speaker acts as garden guide and teacher about the garden design and plants.
Not so with Dominique.
Not surprising when you think about it that instead, she told a story.
Her story.
And in her small, smooth as rose petals voice, read excerpts from her book.
The emphasis was on the words rather than the pictures.
With no loss of imagery.
I disagree with some of Ms. Seymour’s take on “Slow Love.”  Her review was a bit too cheeky for me, seizing on the nickname “abstractions” and Dominique’s failure to see it coming at the magazine and it seems she can’t help but include catty references to former Conde Nast colleagues.   I do agree her assessment of Dominique’s “entrancing combination of humor and humanity, to a beloved garden.”  And to her great wit.
During her talk, it became quite obvious that Dominique is indeed very, very funny.
I love her girl-power sarcasm too.
She can take the bite out of loss and heartache with a dose of pragmatism and humor.
I like that medicine and life lesson.
The lecture and the book is Dominique’s personal, private story of her adapting to life after Conde Nast abruptly shuttered House & Garden Magazine in 2007.
By the way, I was at the same venue for a garden lecture to hear Dominique when a few days later they pulled the plug.
We in the gardening world were astonished.  “Did she know?” we all wondered.
We later learned “no.”  No one did.
Afterwards I learned one of the editors learned about the magazine closing and her job elimination via voice mail from Conde Nast – while she was out of the office serving jury duty!  That’s low…
The recent lecture featured Dominique relating how she coped with such a devastating loss of self that is wrapped up in a career.  It took her almost a year to get over the shock of falling apart.
Bundled with the enormous economic meltdown as backdrop, she felt part of her old world was just “disappearing.”
She asserts that Slow Living is what made her re-orient herself.  “Slow living opens up the prospect of slow love; the prospect of opportunity for reading book, enjoying good food...”
She cited the imperative of “knowing what you’ve got before it’s gone.”
She admired her one snowdrop, for example. One? She’d just concentrate on that, welcoming it into her story.  Just like the white azalea in her classis old Westchester garden left over from the previous owner. Or the stand of sassafras trees.  She adapted the garden over time to her life and likes – getting rid of most of the lawn, plunking a small pink azalea Mother’s Day gift in a spot where she could gaze upon its growth and shared memory.
Soon she realized she needed to build a bridge to a new world: "reality and the written word."
Dominique took us on her personal journey from recognizing the need to sell her beloved home to finding a new place in Rhode Island.
I think we could all recognize the gallows humor in selling and building a home and relocating.
She excels at exposing those wounds and making them a badge of honor.
With a story to tell.
She knows she needs to sell her “forever house” and get out of debt.
She had wanted to pass the house down to her children – to watch her grandchildren there.  But it was not meant to be.
However, she seemed unflappable about the decision.
Her encounter with the real estate agent who advised her to get rid of everything personal who trailed off mid-sentence while trying to take in all her STUFF was hilarious.
Dominique said she even though in her addled brain that the woman would practically scream, “I LOVE it.  Why I’LL take the house!”
Finally the last spring and moving day.  Because she’s so myopic, she’s learned to take a very close look at things. This day, she admired her now 15’ camellia japonica.
The eye problem in some ways helped her she said. Even as a child, she’d look very close at plants, the clover in the grass. She used her imagination to think what the small plants would become.
She walks her garden on the last day and reconciles that it is the best spring ever.
She narrates how the sharp tips of the hostas and the masses of peonies are a curtain call… She strokes a wall and gives it a kiss.
The sky darkened and then there is a torrential downpour.
How fittingly dramatic, no?
At her new home in Rhode Island, she builds a kitchen garden with chamomile, calendula, basil, and started with mint.
She reveled in the knowledge there was no one to tell her “no.”
She planted what she wanted – with much trial and error and humor.
The spreading mint tribulation becomes a metaphor for her struggles. 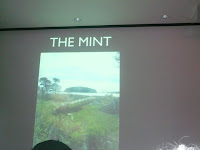 Like a talk over tea, she peppers her story with tales of her too absent boyfriend, building horrors, money, and her utter cluelessness about what she’ll do with her life.
I loved her interlude of “working for plants” with Ed Bower at Opus Plants!
Anything he threw away, she’d take for her garden.
You have to admire her observation that “gardens are so psychological – everything is revealed.”
Especially as juxtaposition to her confession that she “just wanted to hide.”
Soon, she established grids in her garden, planted black pines in the front which led to a garden gate that she "Loved," (planted “Kiss me at The Garden Gate here J , that led to patio, that led to nooks and crannies, that led to rock plantings, that led to …
She claimed to have “made every mistake in the book.”   No grand design. Just did what she wanted.  Sounded liberating for her.
“Gardens always deliver on wonder.” She said.
She may have moved from her “forever house,” but subconsciously found it anew when she said, “While there’s not such thing as a forever garden.  (because they change so much) Forever might be found in this beautiful garden."
She recognized it was a pleasure to get dirty in her garden. She knows her hummingbirds. Her tendons may be sore, but she is “in a state of grace.”
Her journey revealed that life was not the same, but it’s not hopeless.
The garden showed her that.
And if she ever does return to the office life?  She said she’d put a few speed bumps in place.
Enjoy the glamorous garden-inspired journey.