Wave Hill Lecture
at The New York School of Interior Design
Landscape Art & Culture Foment a Community
Wave Hill’s http://www.wavehill.org/ annual lecture series always hits the sweet spot when Director of Horticulture, Scott Canning, welcomes the audience and then like a jeweler holding precious stones, he spotlights a few, seductive plant cuttings from the garden -- chosen to illustrate what’s interesting and on display in this season.  That’s the way to thrill garden enthusiasts! 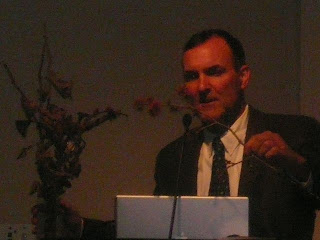 All have a story about them, and Scott’s first plant was no exception.  An Ilex opaca, (American Holly) “Princeton Gold,” he told us Marco Polo Stufano, who at the time was just out of horticulture school at NYBG –brought the seeds with him.  The ilex is beautiful, gets to be about 35-40 feet tall and is hardy to zone 5 – and Scott allowed that if it was planted in a sheltered area – you could push the envelope and zone 6’ers could enjoy it as well.  The berries can’t be beat!
Next up in the spotlight was a charming witch hazel – “Orange Beauty” which he said just opened its confetti-like blossoms that morning. The hamamelis vernalis, “Nature’s Light” is a fragrant, tough sustainable plant that loves alkaline soils.  And the flowers come out before the leaves do!
This plant spotlight put everyone in a good mood to hear from the featured speaker, Patrick Cullina, Vice President of Horticulture and Operations for Friends of the High Line. http://www.thehighline.org/
According to Wikipedia, The High Line is a 1.45 mile park built on a section of the former elevated freight railroad of the West Side Line, along the lower west side of Manhattan.  The Park will eventually run from 34th Streets former freight yard near the Javits Center (and the only place where the park makes grade), through the neighborhood of Chelsea to Gansevoort Street (one block below West 12th Street) in the Meat Packing District of the West Village. (walking distance for me J) 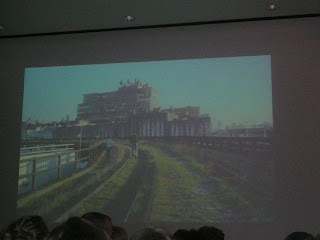 Patrick kicked off this year’s lecture series with an artful, presentation about the sexy, most-talked about public garden to premiere in America in – well, what seems like forever.
The first part of the High Line, opened last year in New York City’s Chelsea neighborhood and is  perhaps best known for its now thriving art scene, the park occupies a precious ribbon of real estate overlooking the Hudson River.  And it also occupies a precious part of our collective soul – in no small part because of its industrial history and the role the High Line played in commerce and agriculture (moving foodstuffs and animals for slaughter) and for its sheer staying power.

How the High Line maintained its pristine roots until like a butterfly, it morphed into an exquisite garden that is the pride of New York, is what makes this a special story.


Those of us who know Patrick, admire his keen eye for photographic composition and his presentation embraced both the “sense of place” of the garden at the High Line and the garden’s sheer beauty as only a New York top model can show off:  in still pictures and in sparkling video.  The tiny field mouse performing circus-like aerial feats and the birds darting amidst the swaying grasses were worthy of the Discovery Channel, bringing out oohs and ahhs and a few giggles for that Desperaux-like mouse J
Patrick set the stage for the horticultural perspective by first putting the High Line into context.  He opened his presentation with an old German film clip showing the fascination and beauty to be found in industrial production and technology.  He next showed an old abandoned Nabisco factory; and a page or two from Rem Koolhaas’ “Delirious New York: a Retrospective Manifesto for Manhattan” Oxford Press (http://tinyurl.com/y88usnv) citing some of the books “architectural mutations” such as Central Park and skyscrapers.  (Koolhaas termed the city as “fantastic” – the “Rosetta Stone of the 20th century.”  I’m certain he’d extend our claim on that through the 21st century – but I’m overstepping here…
The essential question posited by Patrick is, “Do we embrace our industrial past as an architectural past?”
He showed images of a landespark in West Germany that does – even going so far as to offer “Torch Tours” at night!  He pointed out we are starting to see more of this respect for the art of the industrial past in places like Gantry Plaza State Park in Long Island City, Queens, New York (http://queens.about.com/od/parks/p/gantry_park.htm)  where the views of the Manhattan skyline and the United Nations are “framed” by the skeletons of the industrial architecture.  And I’ll add, the soon-to-be -opened-park along the Brooklyn waterfront.  (see earlier posting).
All were impressed seeing the rooftops of Chicago’s skyscrapers planted with dazzling plant palettes.
The images underscored Patrick’s point that “It’s all about the possibilities.”
All this thoughtful background perspective was gearing the audience up for what the High Line is and what it represents in terms of art and community.
He recalled how the garden opened to much fanfare in the spring of 2009, showing all the various news coverage; with one journalist exulting, “it compares to a day in the Alps.”   Patrick joked a bit about that.
He showed how the park has impacted the neighborhood in Chelsea including the restaurants offering High Line “Picnic Specials” or the residents who sing from their fire escape balconies to an enthralled audience gazing up from the High Line.  Some of the women performers apparently were in rent-controlled apartments and have now been asked to keep the entertainment off the balcony and so perform from inside their windows – or as Patrick described it – “it now looks like shades of Amsterdam’s famous ladies of the night!” 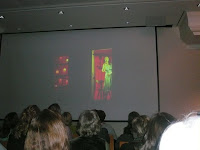 The High Line’s landscape architect is the famous Dutch garden designer and author, Piet Oudolf  (http://www.oudolf.com/piet-oudolf) who is well known for embracing a natural-looking garden (vs. a sculpted or manicured garden) and for utilizing grasses – many of them American natives.  In deflecting those critics who might find the natural, grassy look of meadows as “messy;” I loved Patrick’s comeback. He showed an image of Jackson Pollack’s adored string painting and asked rhetorically, “Why is this art?” And then putting up the image of the garden’s undulating grasses, “And not this?”
There was a collective chuckle from the audience. Or was that a self-satisfied harrumph?
Patrick described the “poetry of meadows” and how people connect to it. At the High Line, they have adapted a concept to a condition… Even the hardscapes are designed to be part of the story, not unlike the Arts & Craft movement.  The plants that fulfill the garden design were chosen with a very thoughtful, artistic vision so that even the spent foliage is just as important.  The plants are meant to interact in the landscape – “falling for another, if you will.”   Patrick admonished not to think of plants as furniture – as in, “I’ll plant two blue tall ones along that wall and six short yellow ones in the corner….”
With a very shallow soil base, the living roof of the High Line was always a challenge.  But he allowed how nature is on their side –- it’s part of the plant’s DNA to "push" to be part of the permanent landscape structure.   The team of gardeners there work very hard to optimize the conditions for the plants survival.
Patrick didn’t hesitate to show the variety of pollinators who were attracted to the plants from day one (not unlike people, truth be told).  Bees, spiders, birds, butterflies used their own special “Metrocard”  to get around the garden -- darting, flitting, jumping and flying.  Visitors are then treated to the nuance of what the pollinators are attracted to.  This is especially enthralling for urbanites.
It underscores the palpable energy coursing through the gardens.
Patrick’s images and narration presented the breathtaking art of nature – from the interplay of shadows to the views – back into the city – and out to the Hudson River and the Garden State beyond.  Like a color wheel, the sunrise or sunset or clouds, all spin the light to offer pinkish, bluish and gold hues that are pure magic.
He walked the audience through the various gardens within the High Line: the Gansevoort Woodland garden with (my favorite) birch traversing through and under the Standard Hotel. http://www.standardhotels.com/new-york-city/

Patrick highlighted the great variety of plants in the park – pointing out each’s spectacular, showy traits so there would be no guessing as why they were chosen to accessorize the landscape.  From the Fringe Tree, sumac, Foxtail Lily, sunflowers, toad lily, asters and vines training up the fences, and the grasses – it was an exuberant tour of an all season garden.  (Examples:  prairie grass is fragrant; the Asian aster blooms a full season later than the NY aster, the glory bower vine is fragrant, the sumac is dramatic red color in fall)
Operationally, Patrick discussed the challenge of removing the snow, bringing all the plants up by crane or elevator.   On the fun side of snow – he showed a series of fantastic snowmen created by the ever-creative citizens of New York!
The High Line is looking ahead to celebrate its first anniversary this spring and will be taking stock of its first year of operation.  They’ll edit, prune, and see what stood up to the somewhat rather harsh conditions.
The High Line is a vehicle for social change, according to Patrick.  He shared his observation that the park creates an unbridled sense of community and get people more interested in plants.
And that’s a good thing. 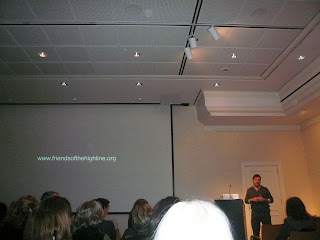 Posted by Garden Glamour at 4:55 PM